Thank you so much for helping me help my fellow disaster survivors.

Given the uncertainty that’s hung over IDV’s future since I sent my previous project report I’m also incredibly grateful for the continued confidence you’ve shown by maintaining your monthly donations. Thank you so much.

Since sending that last report IDV has been continuing its important work around the world. Over the recent holidays we’ve also been working hard raising funds to support the children at the HTDC orphanage in Haiti.

We first met the children in the summer of 2010, after that year’s earthquake. They were all living in one small room and a tent, which flooded almost daily. They were also constantly short of food, the kids were often sick, and the staff had no means to send the children to school.

Survival was a daily battle for the orphanage and all the children in its care. But thanks to IDV’s donors and volunteers, several of you included, we transformed their lives by providing a safe home, food and an education.

Today, the orphanage has a network of partners, but IDV’s donors still provide over 70% of the funding required to meet the kids basic needs on a monthly basis. We’ve also continued to pay the orphanage’s rent every year.

So, with IDV’s future under threat, we decided to focus our recent end of year fundraising on supporting the orphanage.

And, thanks to the amazing support of donors like you, we’ve secured an incredible $14,000 to meet the children’s needs in 2017. This is enough to pay the rent for the entire year, and also enough to provide the kids with food, an education, and everything else needed until around the end of July.

This takes into account projected income generated by the orphanage through hiring out a new bus. We’ve been raising funds to buy this bus for a number of years, and by pooling resources with another of the orphanage’s partners, we finally have enough to make the bus purchase a reality! We know some of you reading this report have also supported the bus project - so thanks for making that achievement possible as well.

Although there’s still work to be done to secure the long-term sustainability of the orphanage, our recent fundraising results and the bus purchase will move us a massive step in the right direction. I’ll return to our future plans for the orphanage in a moment, but before that I also want to share a few updates from our recent work in Banaba, near Manila, in the Philippines.

For all of last year we were focused on completing the community’s Livelihood and Evacuation centre. Sadly, the building’s original donor ran out of funds before construction was finished, and this left hundreds of Banaba’s residents without a safe refuge during typhoons and floods.

So, in December 2015 we stepped up to finish the job. Our work meant that the building was finally made watertight last April, and we then turned our attention to rendering the centre’s brick walls.

This work will protect the building from the torrential rains that arrive every typhoon season, and I’m delighted to report that the last of the external rendering was completed just last month.

What’s more, we were also able to give the building’s three floors a final, and colourful, “screed coat” of concrete. This has finally given the centre smooth, level floors which can be much more easily cleaned and maintained. This will be vital for effective sanitation when evacuees later shelter in the building.

All in all, it’s been a busy and productive few months, and your support has been critical to making our work possible. Although the project work discussed was funded by others, your donations to this project have enabled me to support these vital efforts from the UK. Thank you so much once again for your generosity.

Sadly though, our overall UK funding situation is still unchanged from my previous report. Although your amazing donations make a big difference, we’re still running out of funds to keep me employed full time. As a result, we’ll be unable to continue with business as usual after March of this year.

However, we’ve been considering our options and we’re now discussing one which might avoid having to shut down IDV completely. Although hosting volunteers and starting new projects isn’t feasible without a full time UK staff member, we believe it might still be possible to continue supporting of some of our existing projects, albeit on a reduced level.

We’re still discussing the final details but, if we proceed with this plan then both the HTDC orphanage and our work in Banaba would be included on the list of ongoing projects. And, in this case, your ongoing donations to this project will continue to make our work possible.

I’ll update you again on our plans soon, and once again I remain incredibly grateful for your continued confidence and support. In the interim, if you have any questions or concerns, please don’t hesitate to email Andy@IDVolunteers.org. I would be delighted to hear from you. 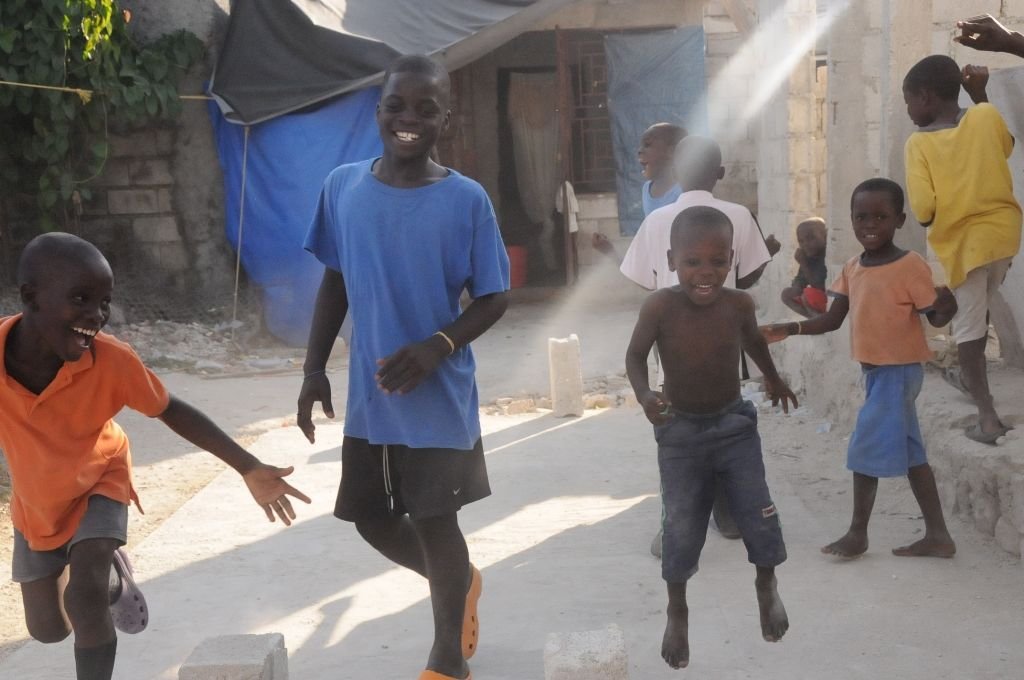 The kids at HTDC orphanage have a bright 2017 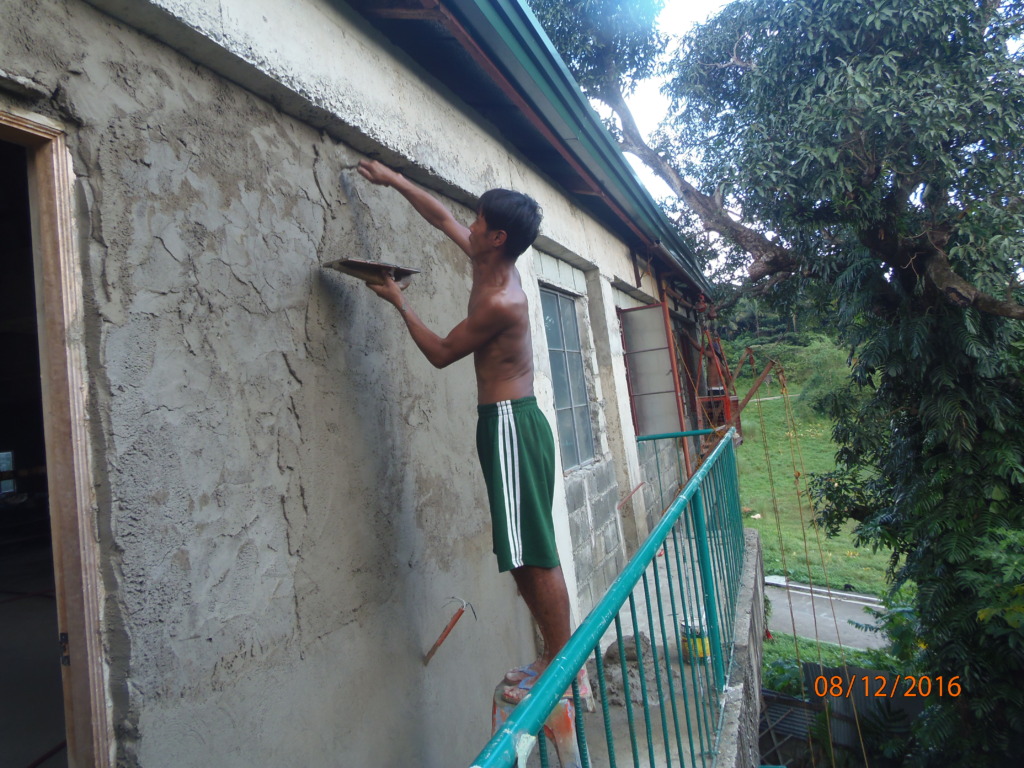 The final rendering on the evacuation centre 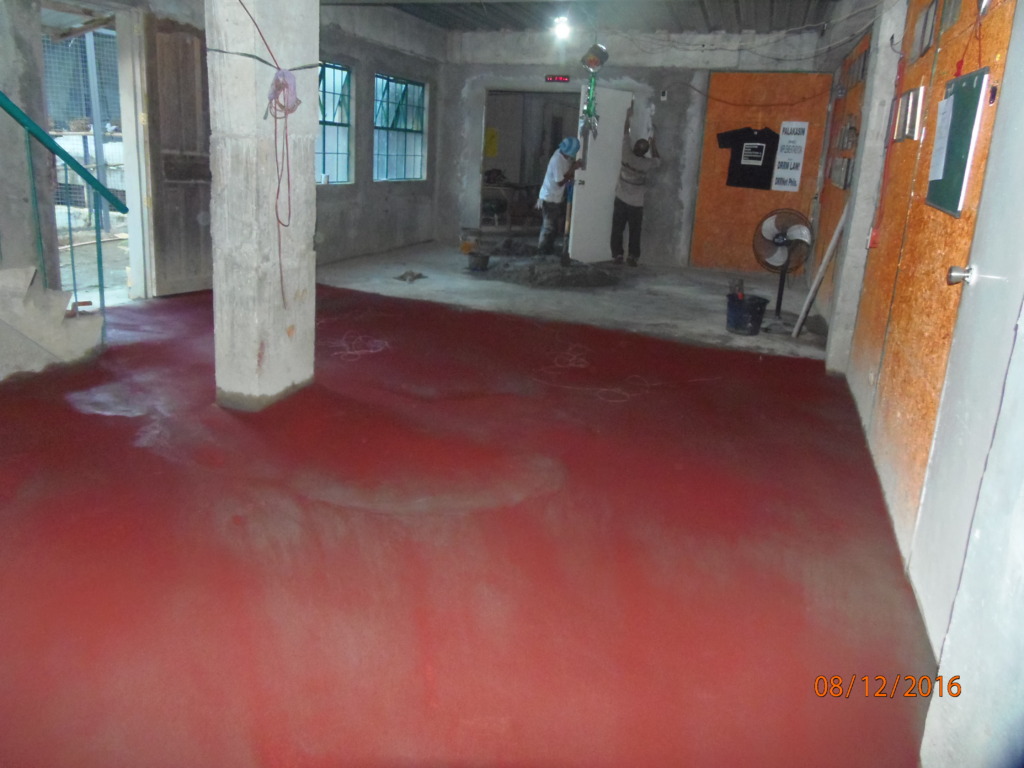 The centre floors get a final "screed coat"

Thank you so much for believing in IDV, and in me 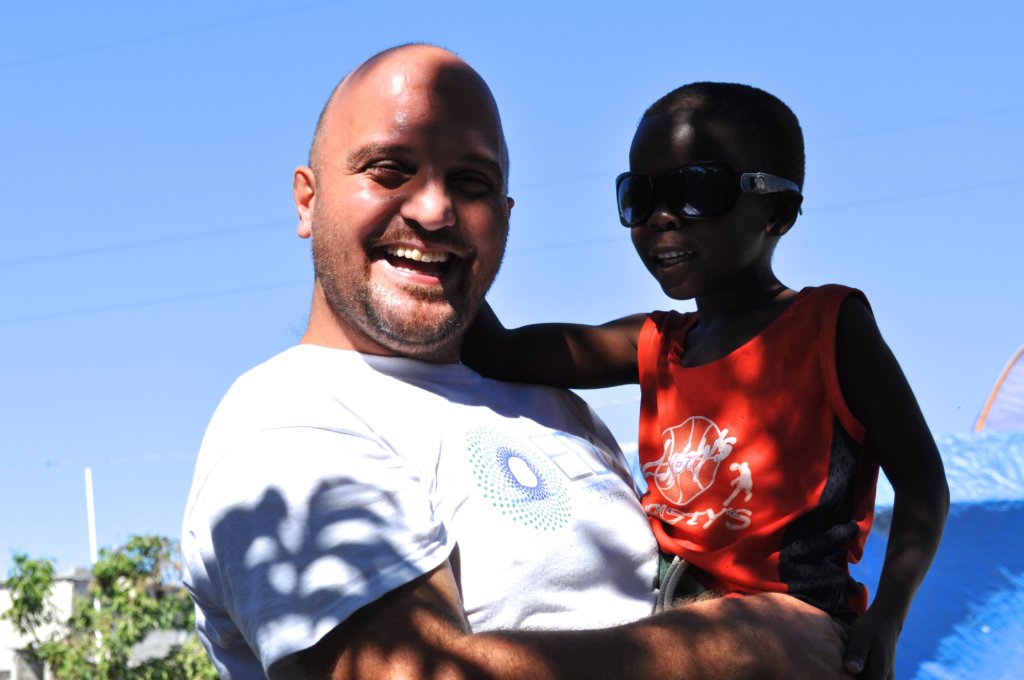 Andy & Wilkinson from the HTDC Orphanage in Haiti

Thank you so much for believing in IDV, and also in me personally.

If you’re receiving this project report via email then you’re one of the many personal friends who’ve signed up to support the sustainability of the charity I co-founded.

That charity, IDV, has helped almost 23,000 disaster survivors around the world since 2010, and our impactful grassroots projects have only been possible thanks to amazing donors like you.

Yet, many of you have also volunteered with IDV, and have donated your valuable time and skills as well.  You’ve all also recently gone the extra mile by starting a recurring donation to support IDV as an organisation in itself.

This heroic commitment reflects your belief not only in IDV and its potential, but also in me and my vision for the charity.  I honestly can’t thank you enough, both for your gifts, and for your confidence.

However, while this project on GlobalGiving was set up with an ambition to increase our UK capacity, and expand our work overseas, it was also set up with a view to basic sustainability.

Our overseas projects have always been our priority, but supporting these projects means that some essential costs have to be incurred in the UK. And for IDV to be sustainable it needs a regular income stream to meet these essential costs.

If you’ve donated to this project, then you understand this, and again, I am incredibly grateful to you personally.

However, when setting up this project we also set ourselves overall, and weekly targets, to measure our future ability to both survive and ideally also thrive. I’m sorry to report that we’re currently falling short of both targets.

This project has been running since the beginning of August, and as of Oct 17 we’d secured around 35% of what we needed to by that point.

Again, this is no reflection on your amazing generosity and belief in IDV, but instead reflects a challenge shared by small charities around the world. Securing funding for project support costs is tough!

This situation is concerning to us, and it will require us to make some tough decisions over the coming weeks.

At the moment we have enough funds to meet our UK costs until March of 2017. After this, we’ll likely be unable to provide the same level of support to our overseas projects and partners.

And while we continue hoping for the best for IDV, we also believe that we have a responsibility to start planning for the worst, so that any required transition for these projects and partners can be managed effectively.

Happily, because of our focus on project sustainability over the years, we are confident this is all possible if we start soon.

Many of our projects and partners have grown into, independent, thriving organisations in their own right. Several have alternate sources of income and support.  As a result our own contributions have already begun to be phased out over recent years.

However, the HTDC Orphanage (SMDT Orphanage in French) in Haiti is still largely, although not totally, reliant on IDV. As a result we believe that one of our primary focuses over the coming months has to be on helping to safeguard the future of the thirty or so children in the orphanage’s care.

We also have to ensure that our other projects and partners in Haiti, Nepal and the Philippines have the support, and time, they need to make any required adjustments their side.

As a result of these facts we now have less capacity than previously to actively fundraise to meet our project support costs in the UK. So, it’s likely that we will soon be closing this project on GlobalGiving. We would also understand if you decide to cancel your recurring donation immediately upon reading this report.

Once again, thank you so much for the belief and confidence you showed by donating to this project on GlobalGiving. You gave me hope and inspiration by doing so, and I am sorry to have to break this news, despite your amazing generosity.

We will be sending more updates soon, including right here on GlobalGiving. In the interim, if you ever any questions or concerns, please don’t hesitate to email Andy@IDVolunteers.org. I am always happy to hear from you. 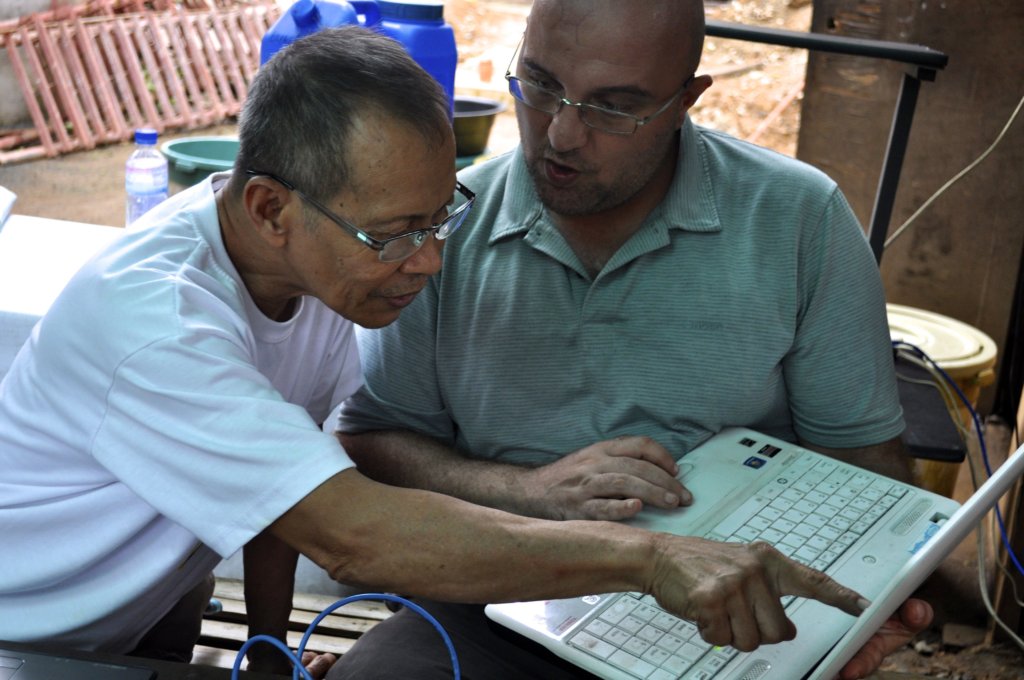 Andy & Ka Noli during an IT training in Banaba 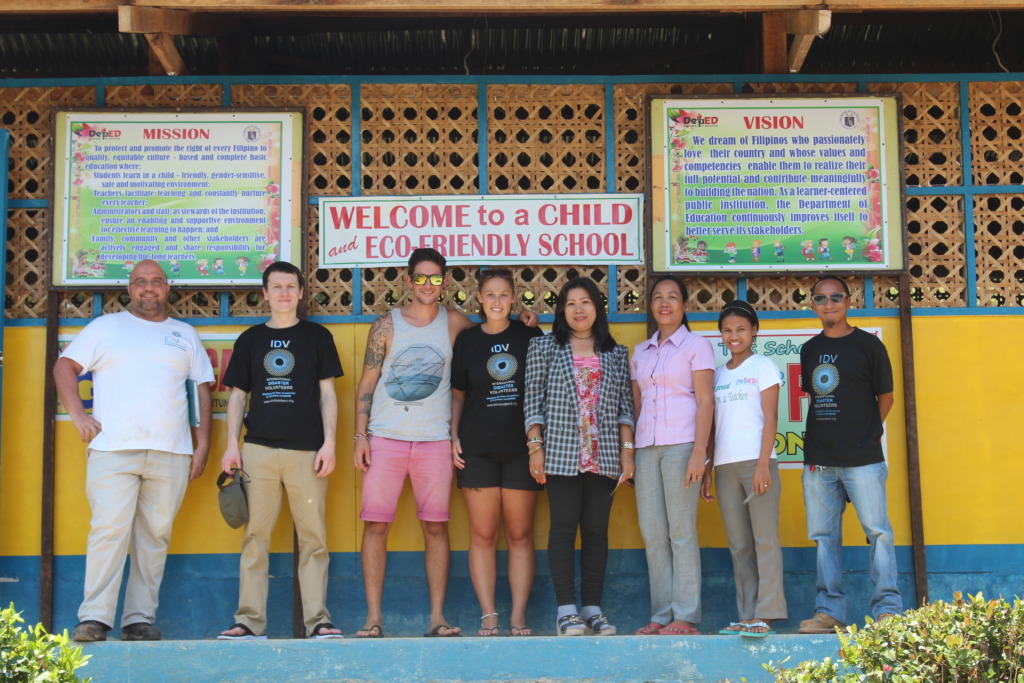 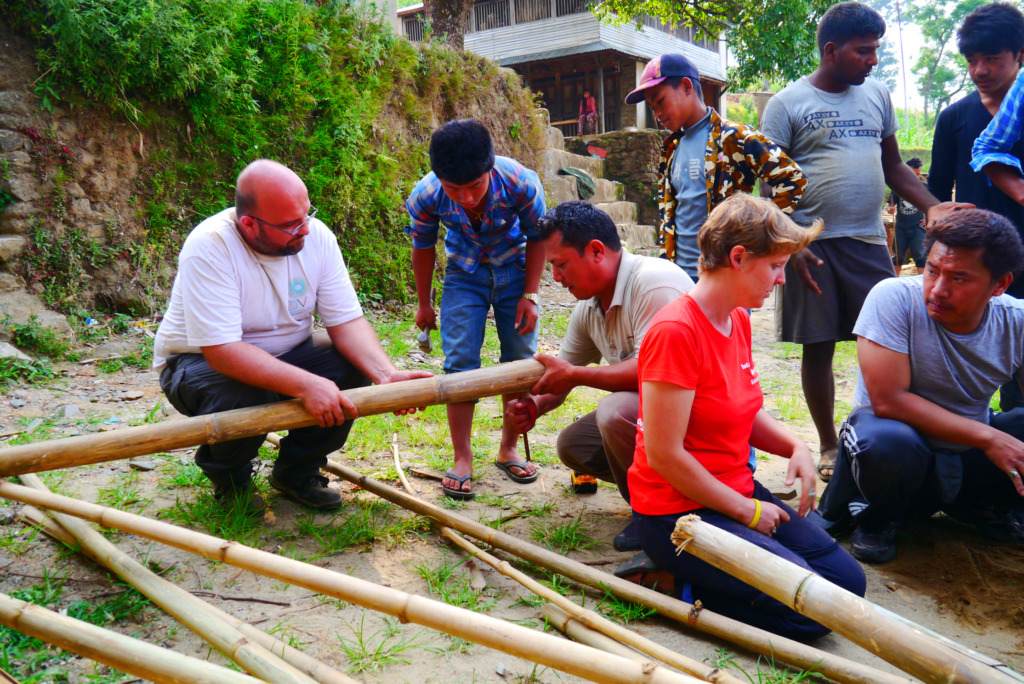 Temporary classrooms after the Nepal earthquakes