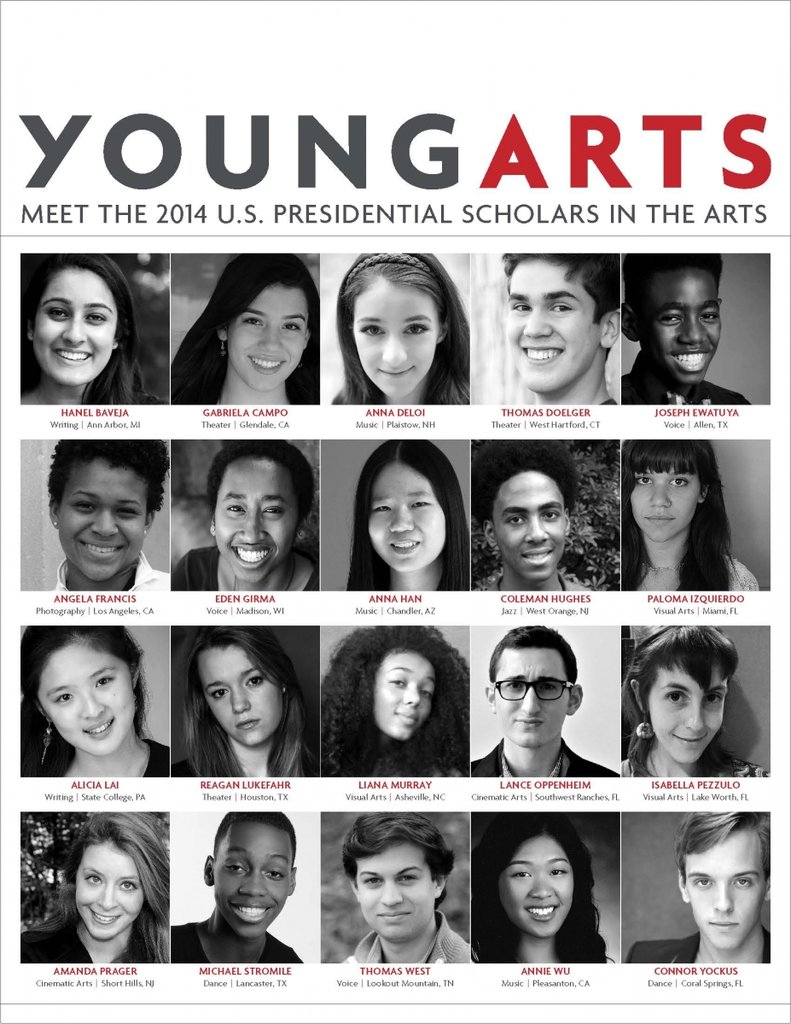 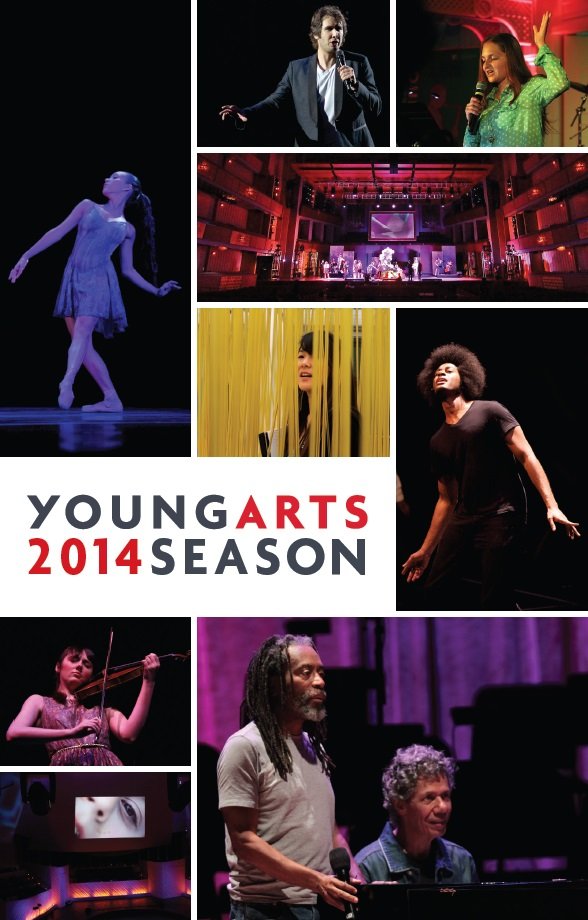 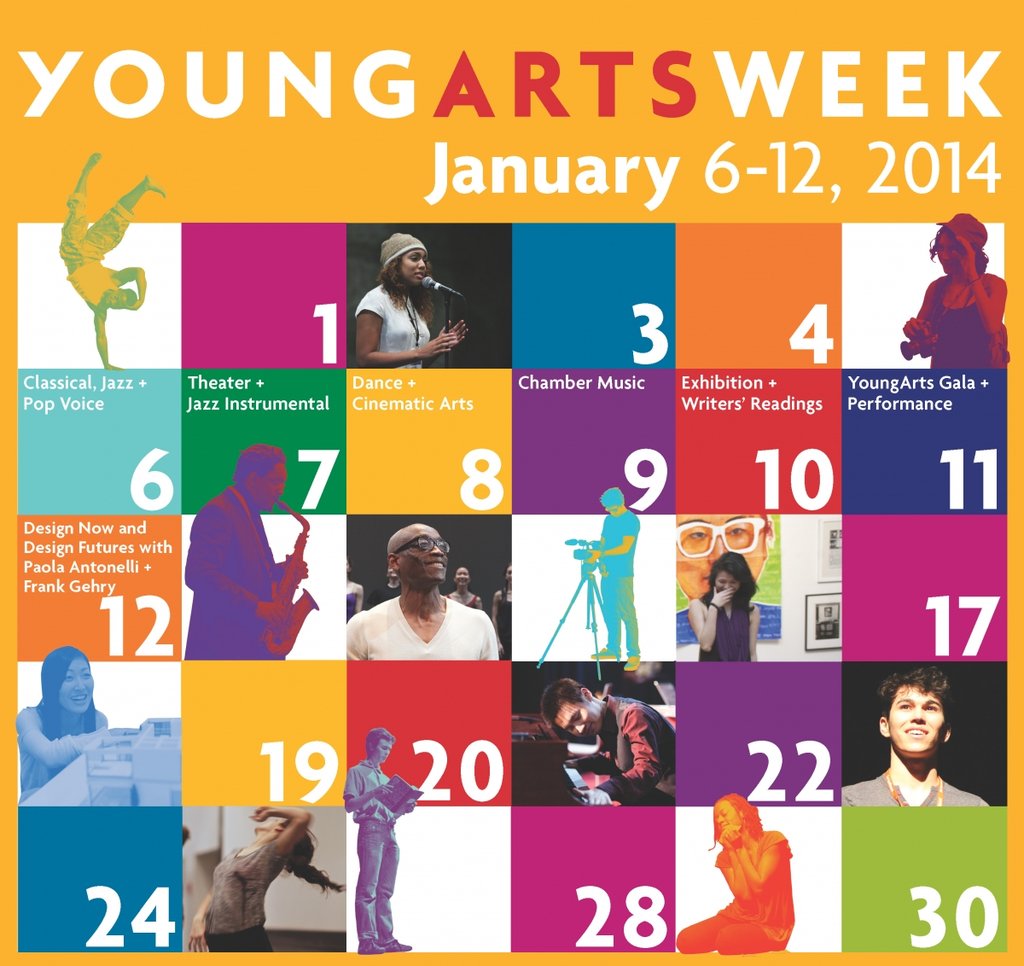 We are pleased to announce this year's YoungArts Week dates. The national program of YoungArts takes place in Miami each year and enables approximately 170 participants in the YoungArts program to work with distinguished master teachers and mentors. Like all YoungArts programs, YoungArts Week is designed to support young artists at a critical juncture in their lives and encourage their decision to pursue a career in the arts.

This week highlights the arts across 10 disciplines and celebrates these winners for their accomplishments. We are grateful to our supporters who enable us to provide opportunities to these students.

FRIDAY, JANUARY 10
JAZZ COMBO
Performances by the 2014 YoungArts Finalists in Jazz and a special guest artist

2013 U.S. Presidential Scholars in the Arts 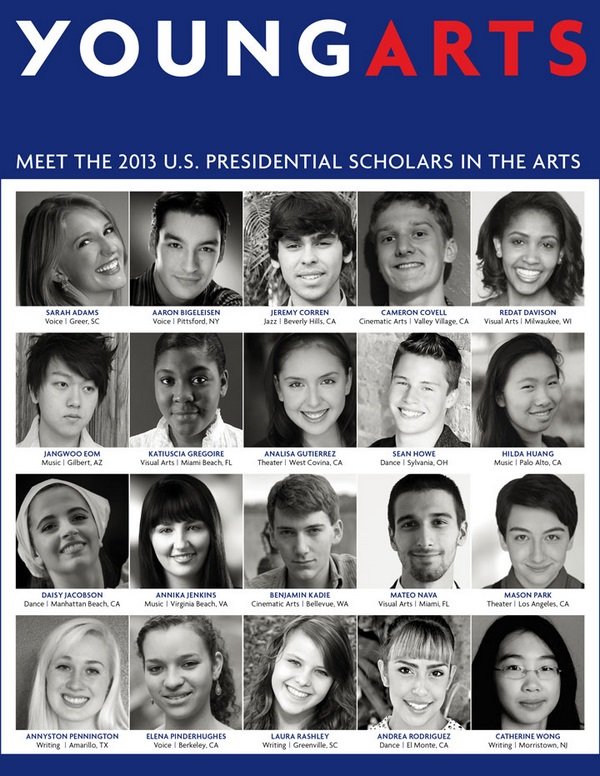 Congratulations to the 2013 U.S. Presidential Scholar in the Arts!

In Washington D.C. on June 16 and 17, 2013, we celebrated our 20 YoungArts winners who were are chosen to be this year's U.S. Presidential Scholars in the Arts. The visual arts, photography, writers and cinematic arts winners showcased their work at the Smithsonian American Art Museum on Sunday, June 16 with an exhibition followed by writers readings. The next day the performing arts winners showcased their talents at the John F. Kennedy Center for the Performing Arts. This year's winners come from all over the country and we are so proud of their accomplishments.

Thank you to all who support our mission and afford us the ability to provide programs to these talented artists!

Please join us May 9-11 for YoungArts New York. The YoungArts New York program gives the winners and alumni from the New York area unique opportunities to showcase their talents, work with great masters, and enrich their artistic vision throughout the year through YoungArts collaborations and partnerships with the City's leading arts organizations.