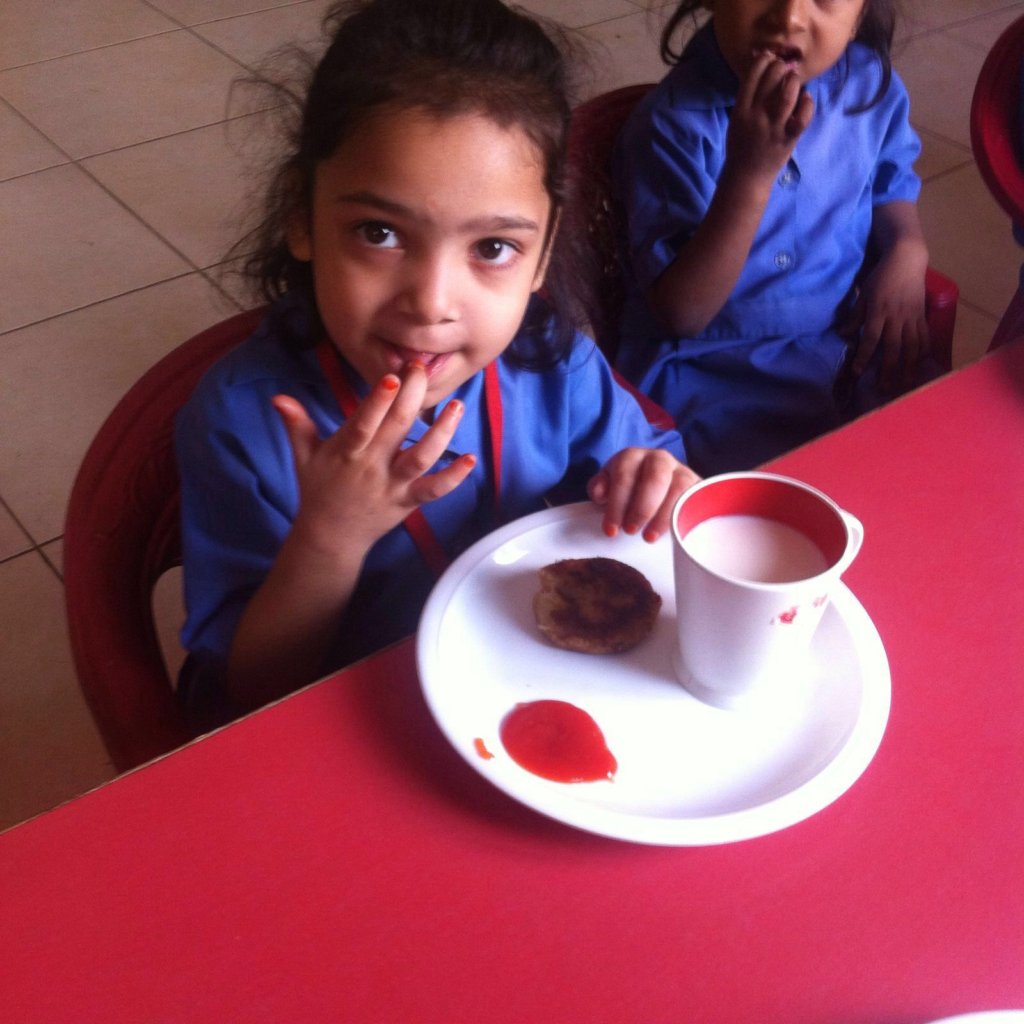 I love potato cutlets with milk!

We fed a daily breakfast to more than 250 kindergarten students at SMB Fatima Jinnah Government Girls School in Karachi. The menu remained the same as the last quarter, featuring a tall glass of milk along with one of the following: fruit salad, potato cutlets, French toast, bread with jam and butter, eggs, sandwiches, wheat porridge, pancakes, sweet porridge, chick peas, and boiled potatoes.

Dr Seema Hassan (MD, MPH, CPH), a doctor specializing in public health and nutrition evaluated our menu to review the nutritional value of the food offered to the students. She has proposed certain changes, such as introducing wheat porridge and using homemade jams instead of store-bought ones loaded with preservatives. She also urged us to check the ingredients list of all packaged items such as oil, spices and butter to prevent the use of unwanted additives and guard against contamination. Earlier, our management urged upon the school to avoid refined floor products such as biscuits and sugary cereals. These changes will be incorporated at the onset of the new academic year starting April.

The Sindh province is plagued with malnourishment and stunting, which is one of the reasons for our introducing the breakfast program at a public school. To determine the impact of the breakfast as well as of the changes in the menu, we measured the baseline weight and height of the students in August. A follow-up was taken this month and the endline weight and height record has shown a considerable improvement in the health and growth of our youngest students.

The class teachers and the section incharge get regular feedback from the parents of the kindergarten students, as they come to school to pick up their children every day. In general, the parents have given a great positive response to the new breakfast items being served at school and have noticed an improvement in the overall eating habits of their children. They are thankful to donors like you who make this breakfast program possible! 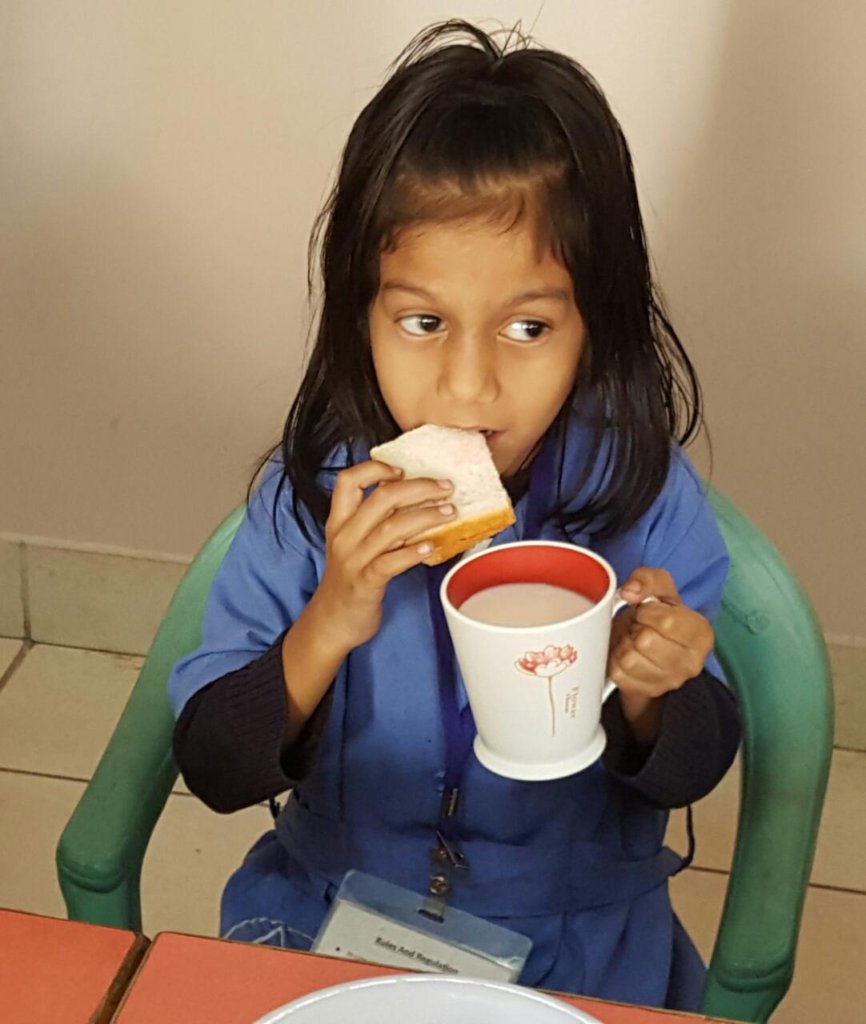 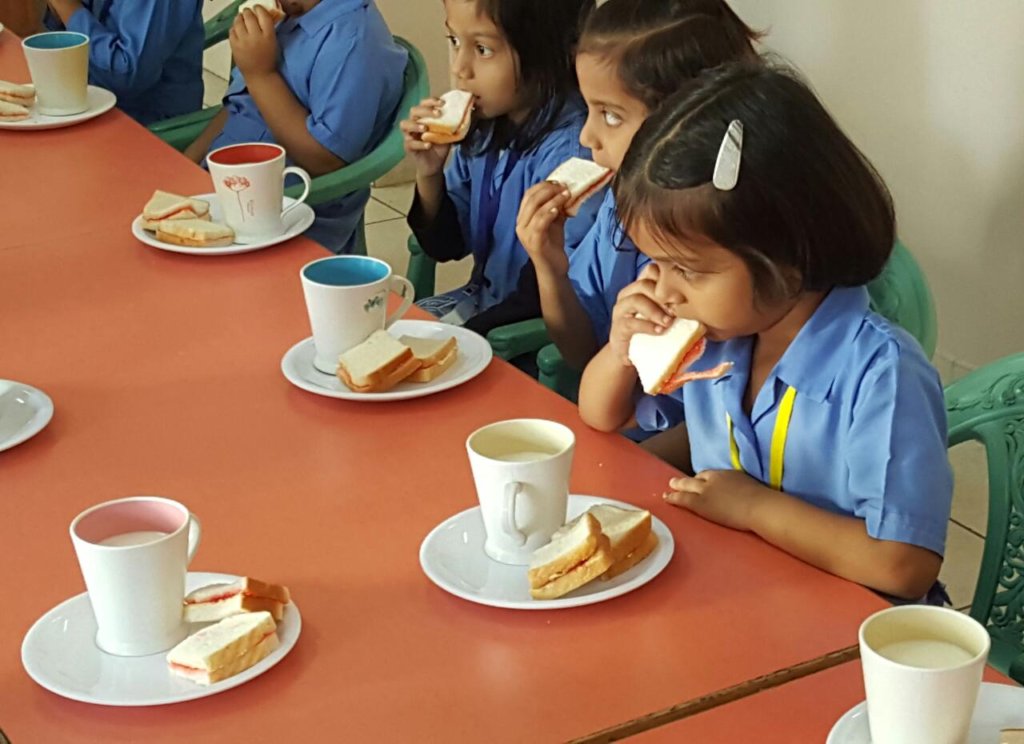 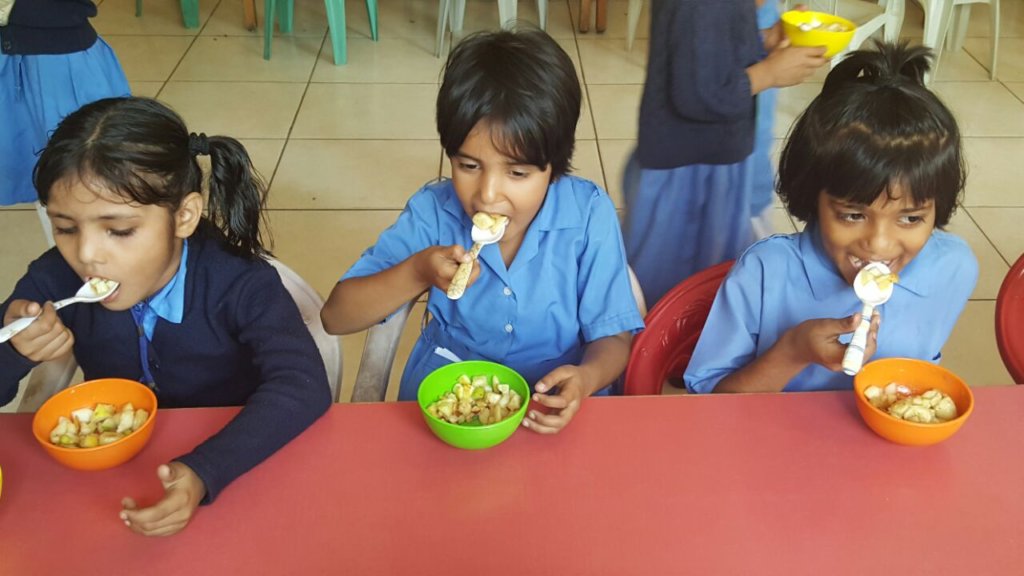 chowing down on chickpea salad with fruits

During the past three months, 254 children from the Kindergarten Section of SMB Fatima Jinnah Government Girls School in the heart of Karachi were served a nutritious breakfast every day. As winter approaches, we have introduced a few wholesome new items to the menu such as chickpea salad, boiled potatoes and sweet porridge.

We also recently made the switch from the commonly available UHT-milk to a brand of hormone-free cow's milk to ensure our students get the best bang for buck in terms of nutrition. The baseline menu continues to include milk along with a rotation of fruit salad, bread and butter/jam, boiled eggs, sandwiches, potato cutlets and wheat porridge. The children also enjoyed chocolate pancakes as a treat one day, thanks to our wonderful breakfast chef Abidi.

In November, during the term PTM, the parents of our students specifically appreciated the breakfast service initiative provided at school completely free thanks to your donation. At this meeting we reiterated that parents and their children should make an effort to establish healthy eating practices at home. We also informed the parents that children at that age were not allowed to bring chips and other unhealthy fast food snacks to school and encouraged them to pack home-cooked, nutritious snacks for their children.

Please continue to donate to this program to help us fuel the brains of our future generations! 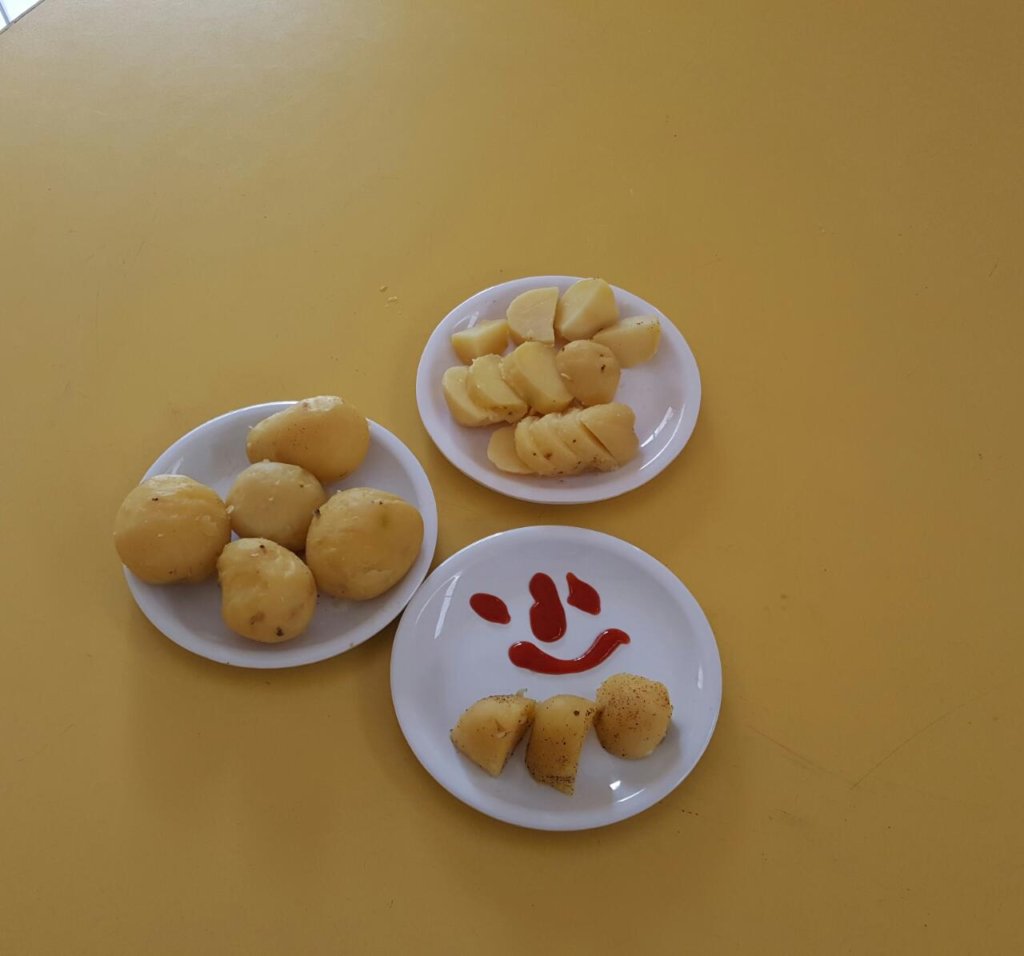 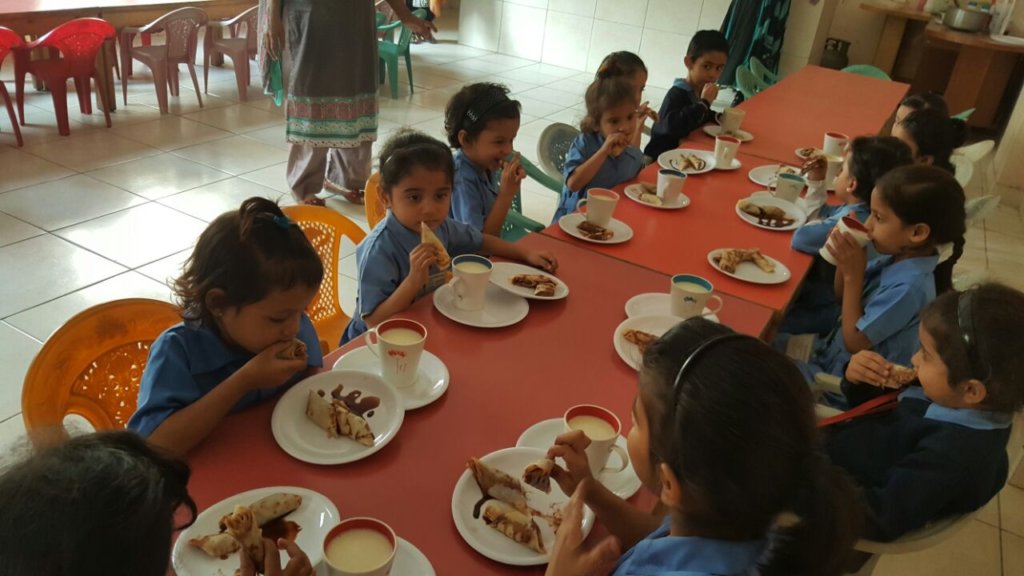 a treat for breakfast - chocolate pancakes!

Buy a breakfast for 250 kindergarten kids in Pakistan 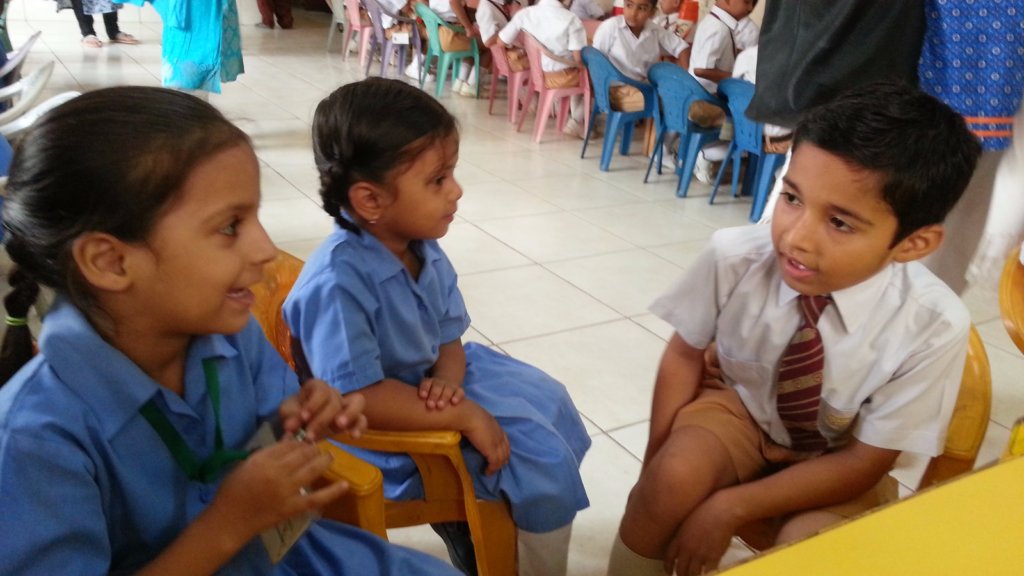 During the past 3 months, more than 250 children at a low-income school in Pakistan's biggest city were fed a nutritious breakfast through Zindagi Trust's Kindergarten Breakfast Program.The program has been running for several years at SMB Fatima Jinnah Government Girls School, as part of a larger school reform initiative and features a breakfast of milk along with wheat porridge, salad, boiled eggs, French toast, etc. depending on seasonal availability.

Earlier this month, our girls got a cute surprise when boys from Habib Public School, one of the city's most prestigious elite private schools, entered the breakfast room for a visit to talk, share and learn. Students from the two schools had breakfast together and exchanged thoughts about school and the importance of good nutrition and a good start to the day.

The teachers and management of the guest school appreciated breakfast program at SMB Fatima Jinnah School and was impressed with the procedure of serving the breakfast in a hygienic manner. The message of starting the day with a good breakfast has travelled to the community through our students and also through our direct interactions with their parents. Students who have moved to higher grades have developed a habit of having breakfast at home. They have also learned to bring homemade food items for their break in school rather than buying junk food, a message driven home through multiple meetings with parents.

Nutrition is the key to effective education for the next generation - please help us provide breakfast to our youngest students through a donation to the breakfast program! 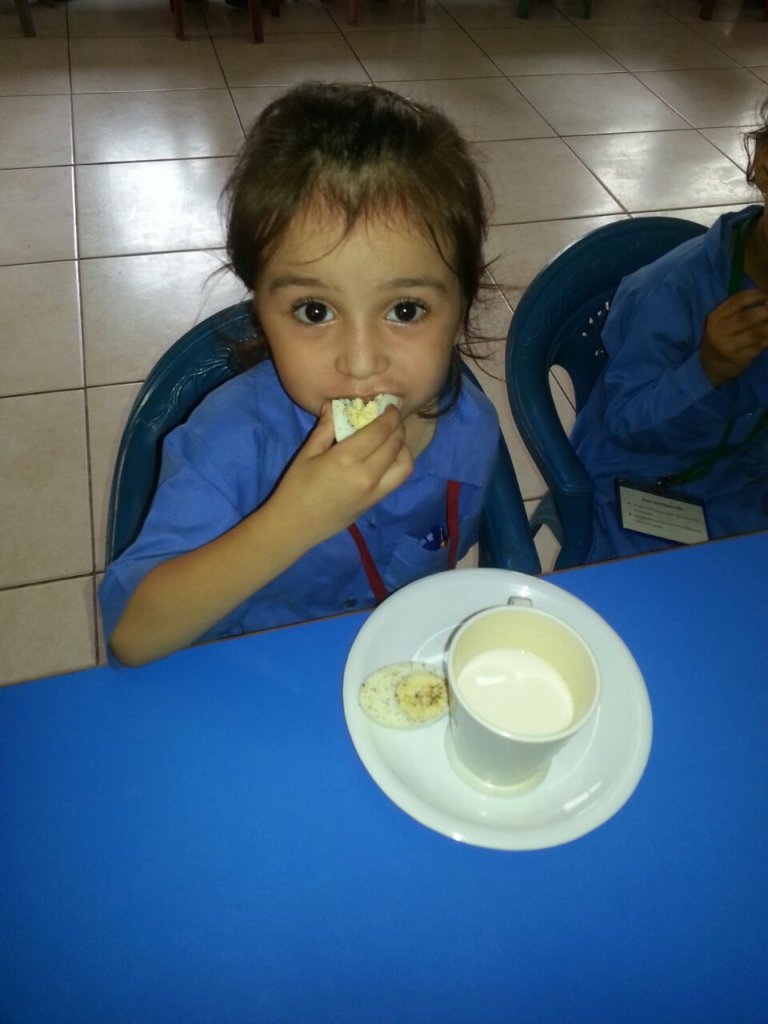 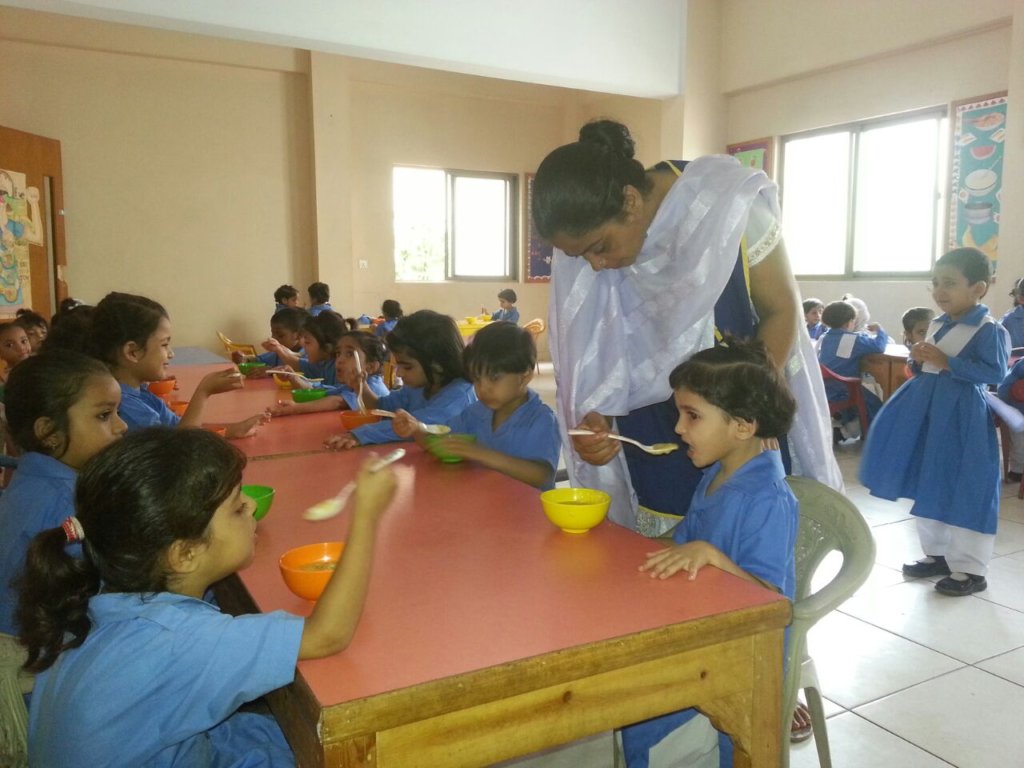 During the months of March, April and May, over 250 children studying in Kindergarten (KG) were served breakfast at SMB Fatima Jinnah Government Girls School. Over a 100 of these children had been newly admitted to KG 1 and saw the practice of school-provided meals at breakfast for the first time. We are pleased to report that their parents were overwhelmed by the program and expressed their utmost gratitude and happiness with the facility.

New additions to the summer menu included fruit chaat (a kind of local fruit salad), potato cutlets and French toast. To beat the scorching heat, a traditional lemon drink Limo-Pani was also served to students several times during the day. Apart from the changes for the summer, bread, jam, butter, cake, egg, biscuits, sandwiches and wheat porridge etc. remained a part of the rotating menu, along with the permanent feature of milk which was served daily with breakfast.

In April, the school conducted a series of Parents’ Orientation sessions for parents of children enrolled in all the grades. Parents of KG students spoke about the breakfast program and really appreciated it. At this point, the school management encouraged the parents to promote the habit of consuming healthy food at home. Parents were also instructed not to pack chips, biscuits or other packaged fast food items in their children's snack-boxes. They were informed of the menu of breakfast provided to children at school and asked to make an effort to send a home-cooked snack instead of giving their young children money to buy snacks from the school canteen, if they felt that additional snacks were necessary.

We thank you for your continued support and hope you will continue to make these nutritious school meals possible! 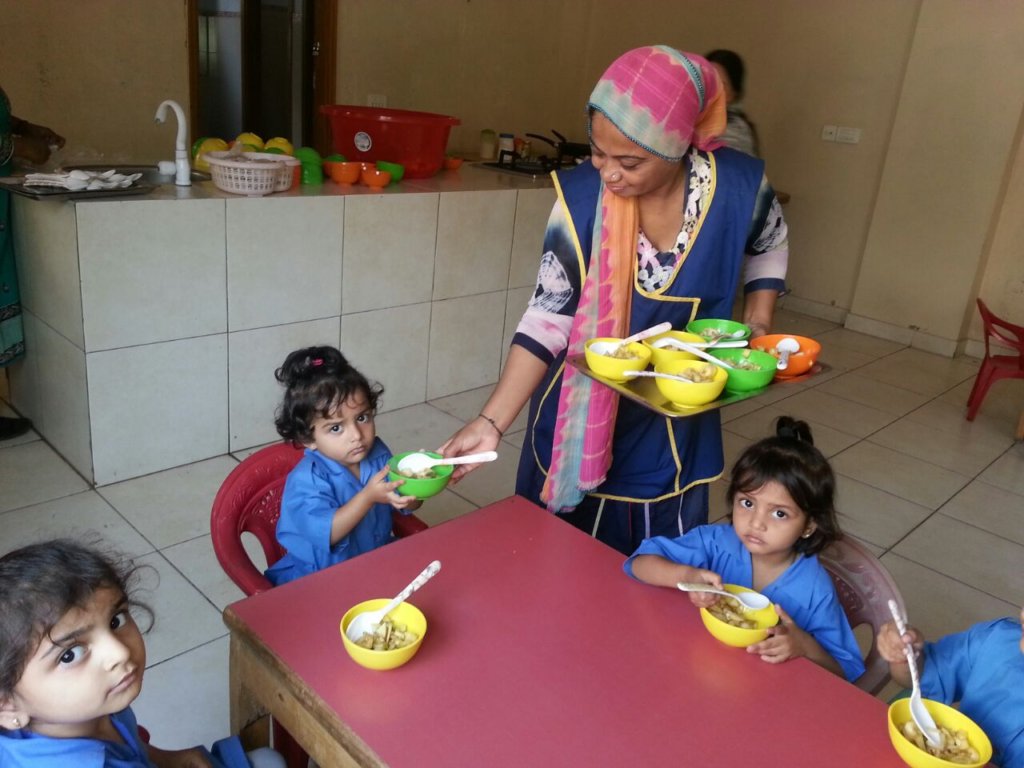 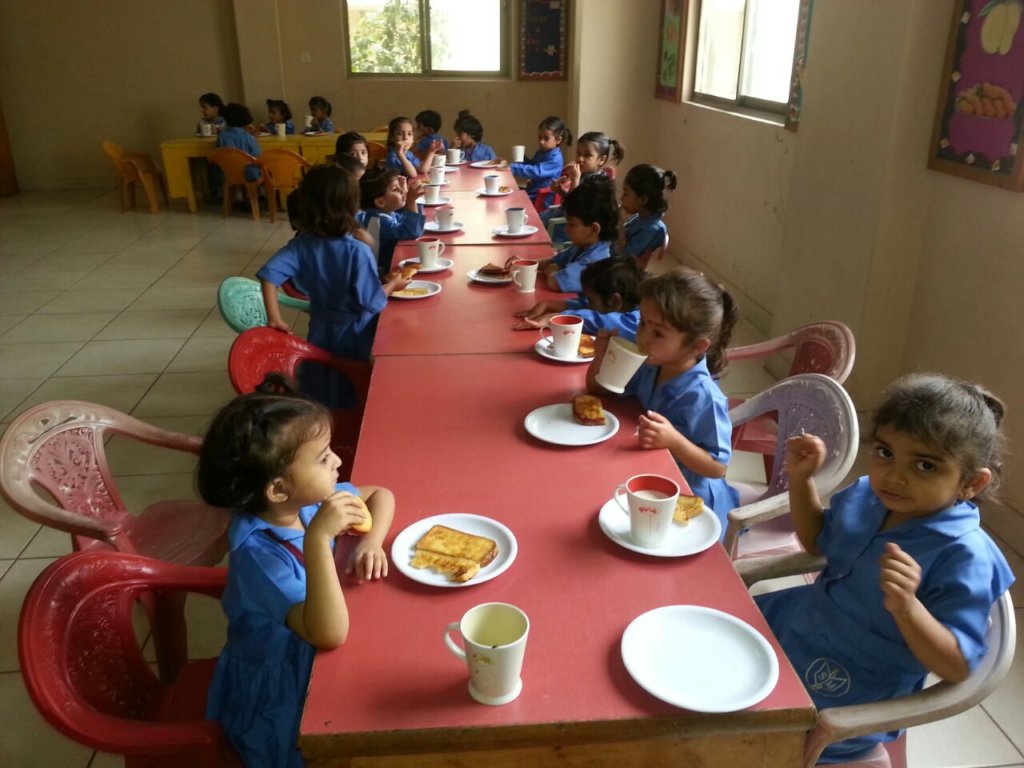 Breakfast for our students 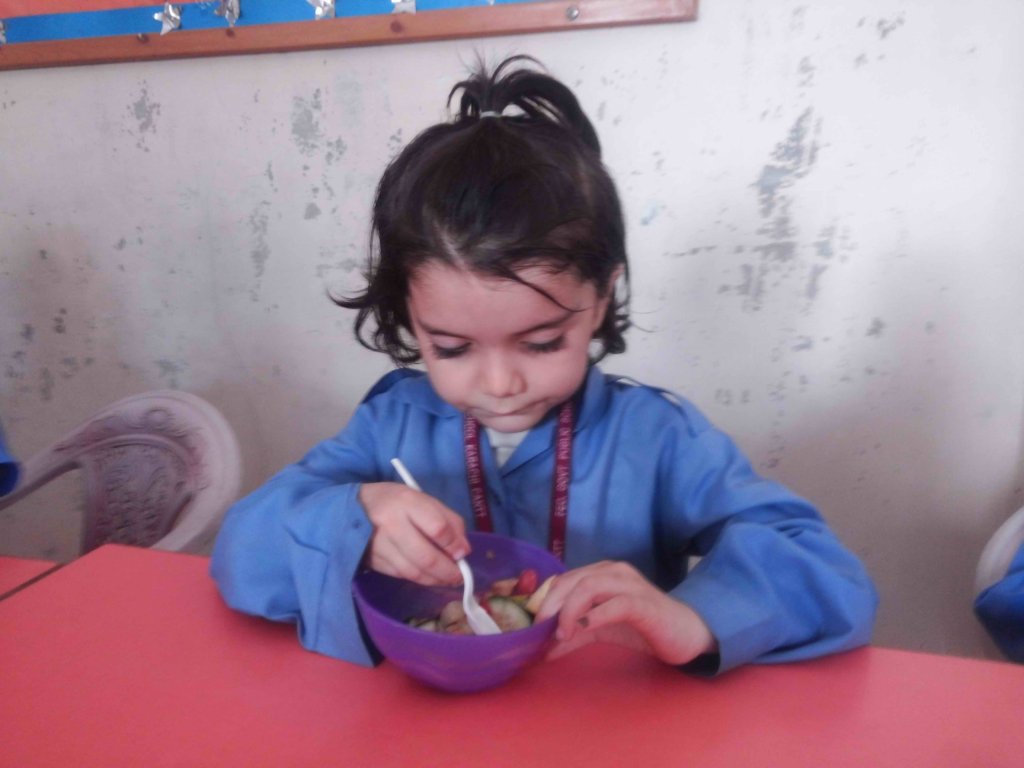 As you know, your donations help feed breakfast over two hundred kindergarten students at a public school in a low income neighbourhood of Karachi, Pakistan. The standard breakfast menu at SMB Fatima Jinnah Government Girls School incudes milk, bread, butter or jam, and a bakery item such as biscuits or cake. In addition, a choice of chicken soup, wheat porridge, eggs or chicken sandwiches is provided depending on the season.

This quarter, we introduced three new items on our school breakfast menu: potato cutlets, vegetable salad and french toast. These are prepared fresh by our maids and teachers in the kindergarten kitchen. Our youngest students and their parents are loving the new addition, specially the potato cutlets which make for a hot, filling start to the day.

This nutrition support programme is making a difference by enabling students to focus their energies on their learning during the school day. We hope to continue receiving your support through donations! 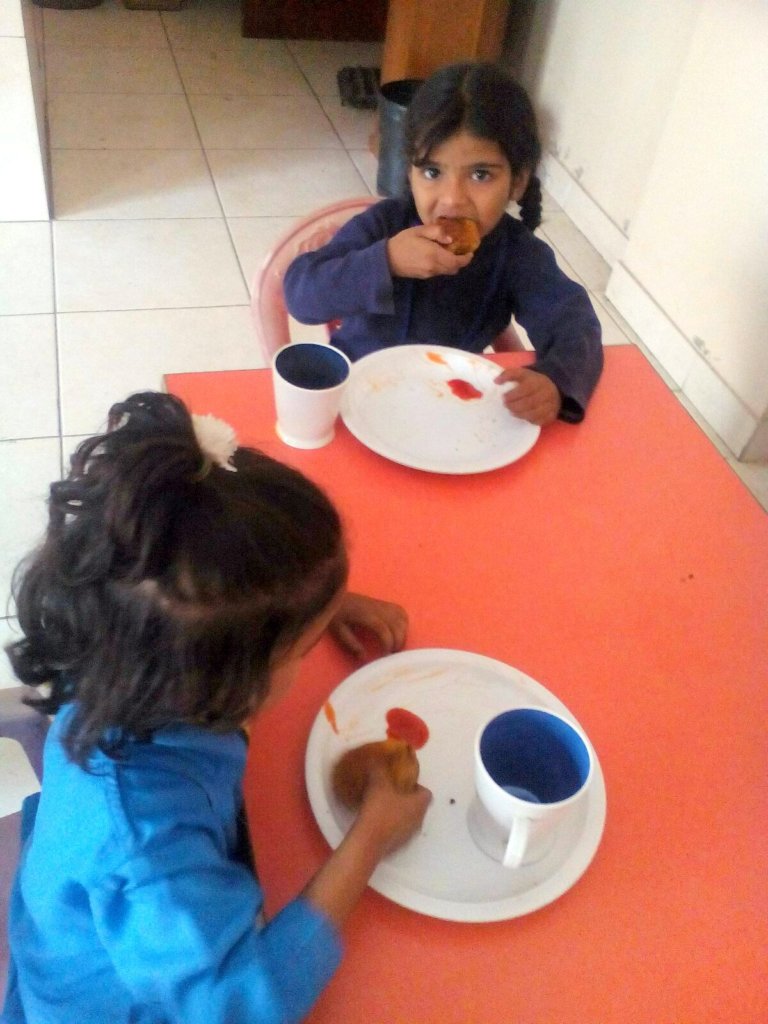 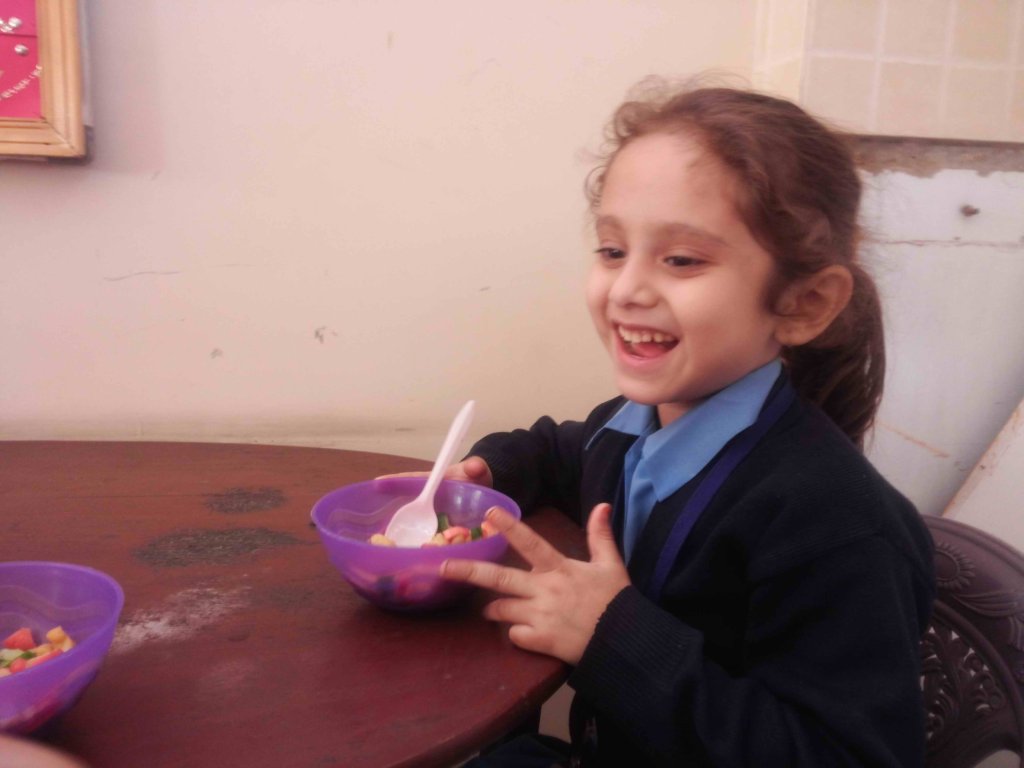