by Juhudi Children in Crisis 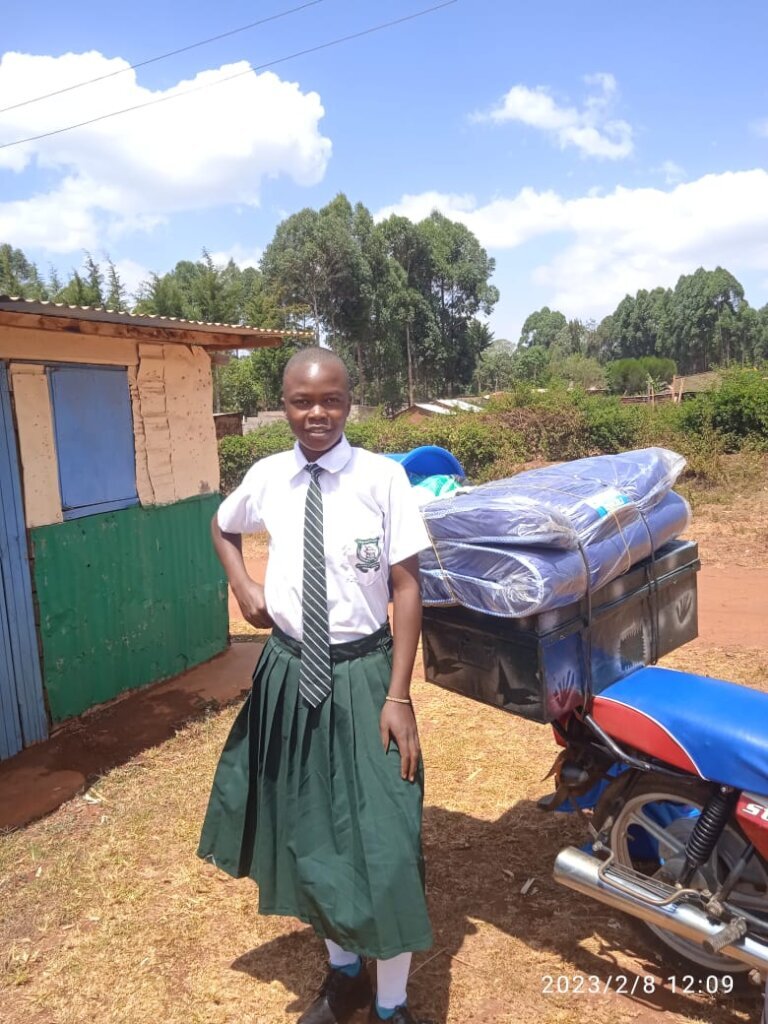 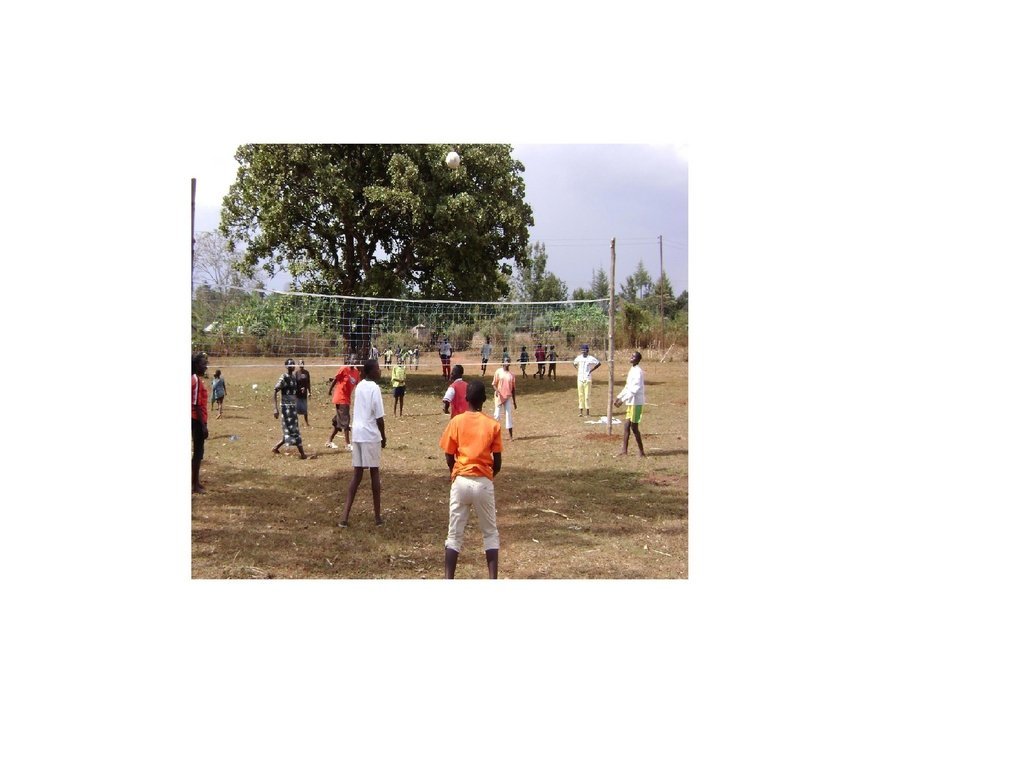 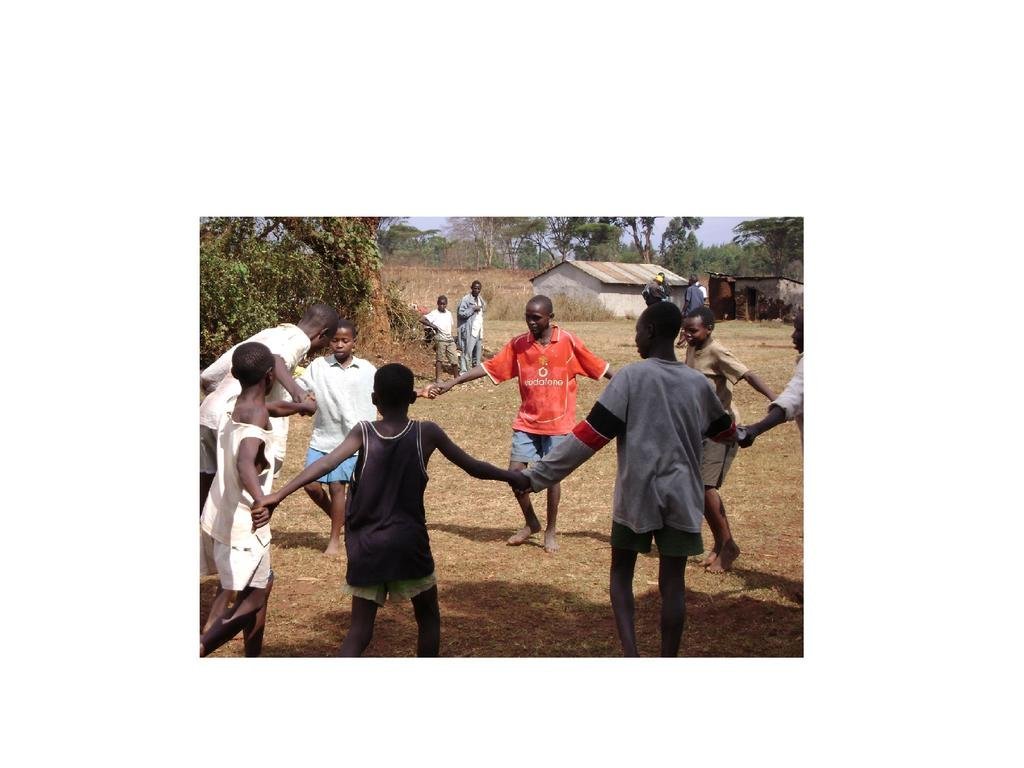 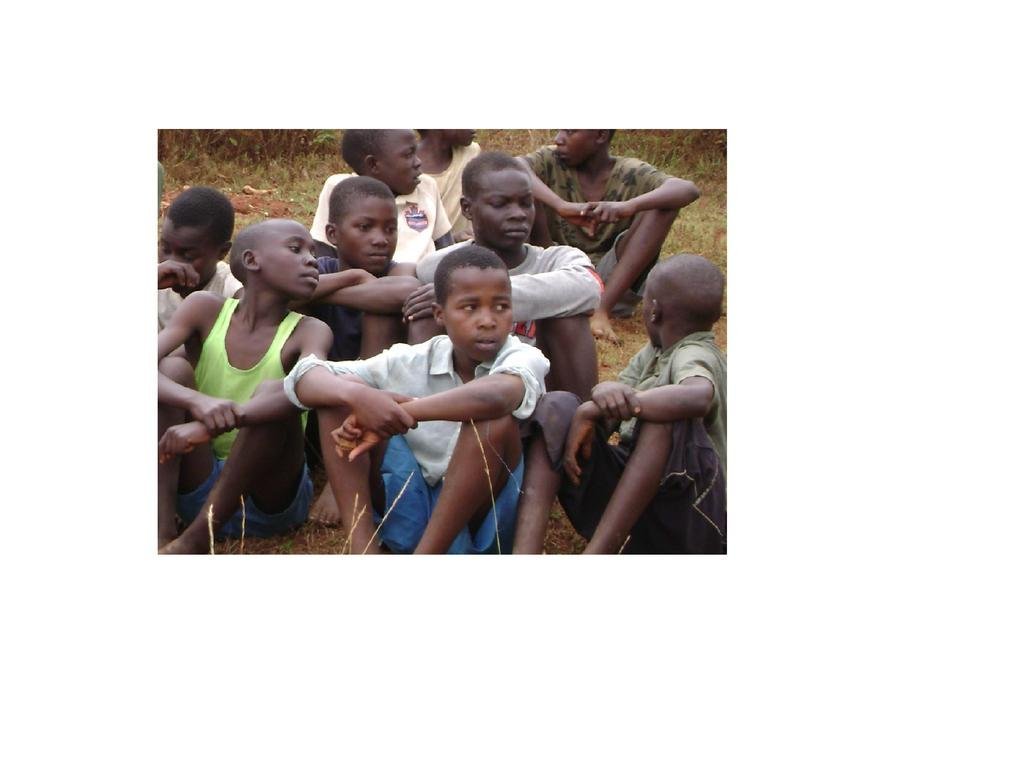 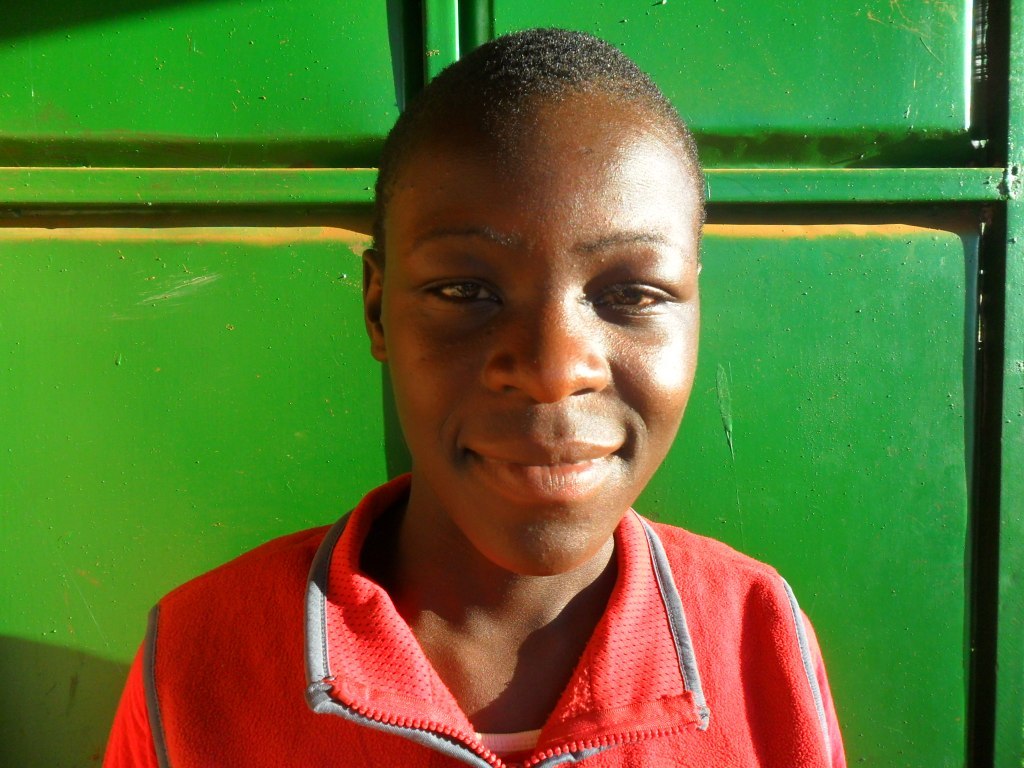 Having lost her parents at an early age, Jecinter Naliaka has gone through many challenges which led her to seek refuge to relatives for her living. Its only last month when Jecinter lost her relative who has been taking care of her. This made her move to her step grandparent because she needed someone who understood her well and who could take care of her as an orphan. Her step grandparent who surely struggles everyday to get food for her and other children that he lives with could not to support in paying her school fees which saw her sent out of school every time. After meeting Juhudi, jecinter’s school fees has been paid and know she is back in school getting the formal education in Kenya. Jecinter has taken a very big responsibility in her school as a peer educator whose passion is to see other young boys and girls excel in education and life. She frequently trains others in various areas of development. ‘Am happy that I can be in school as other children and promise to give out very good results as I continue to help others as a peer educator’.

Light at the end of the tunnel! 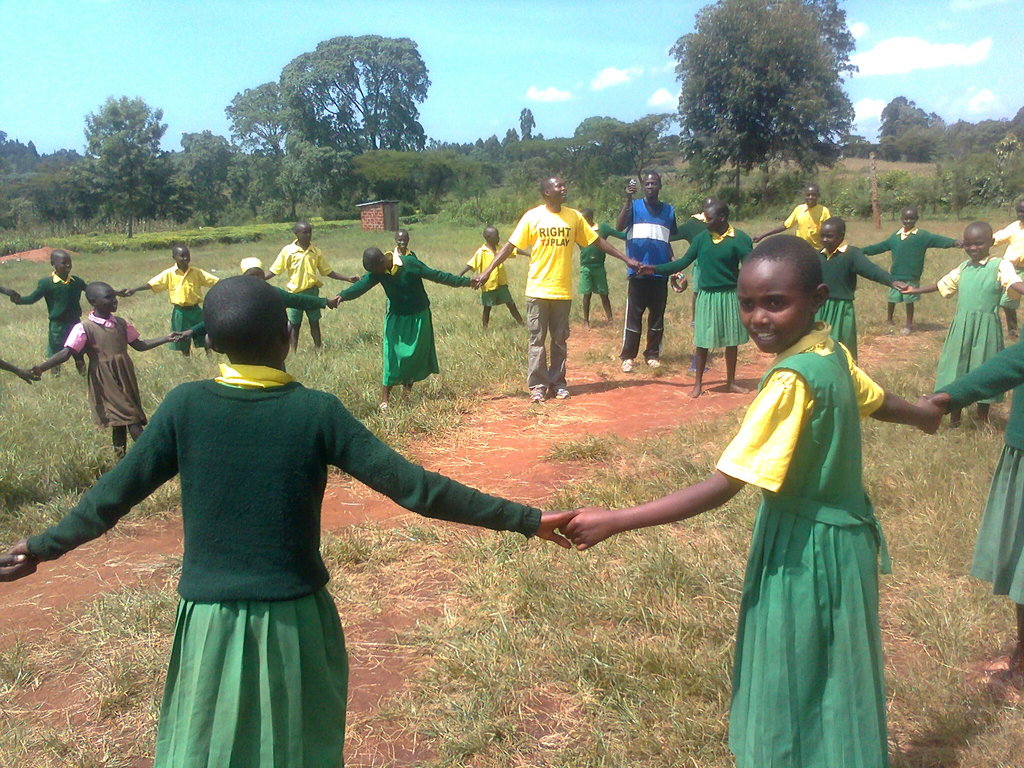 Despite challenges facing girls especial lit in the rural areas, the project has had some significant impact on the lives of some girls: we share with you such success: Emily; 3rd born in a family of 8. Brought up a single a mother who has to brew and sell illicit brew. She was exposed to high risks and sexual exploitation as the home was turned into a bar. Through the project, Emily 16 years is now able to cope with the situation at home. She knows her limits and has confidence to say NO to any sexual favors. She hopes s to perform well in her class 8 exams this year. Irene; A daughter of a single mother. A mother who has to make and sell illicit brew to cater for her 10 children. Irene, 17 years found herself caught up in the brewing business which went into late nights. This affected her educational and social performance. After being in the project where she learnt life skills, she opted to move away from her mothers, home and took refuge at her Uncles place. Her education has improved and hopeful she will do well in her KCPE exams this year.

Velian ; At the age 15, Velian has seen it all. An alcoholic and promiscuity family. She was under stress for a while which directed her to promiscuity. The project is helping her realize that her life is not shared. She discovered she has to hold her destiny in her hands. Elizabeth : Finished her secondary school education in 2009. She stayed idle at home for a long time after which she got pregnant something that led her to lose hope in life. After joining the project her parents decided to give her a piece of land which she started planting vegetables and selling them at the local market Bilha ; Dropped out of her secondary education due to lack of school fees. She has now started a business of buying and selling of milk Willbrodah: Finished her secondary education in 2008. She had passed well but her parents did not have money to enable her pursue with her education (college).She later got a baby while still at her parents’ home. She is now teaching ECD at village from which she raises her kid. Lillian : She finished her primary school education but did not continue with secondary education because her parents had no money. She started working as a casual labourer in people’s farm. She got pregnant and then married but her marriage did not work. She went back home. She now buy and sells sugar cane, maize and vegetables Rebecca : Got pregnant while still taking her secondary school education. She managed to finish her education. She went for a course in secretarial and finished. She is waiting for her internship at Pan Paper Webuye .Meanwhile she is selling vegetables and milk. Sarah: They have a joined Tailoring business at small centre. Rebecca also buys and sells vegetables to kitale town. Letesia did not do her class 8 exams due to pregnancy last year. Meanwhile, Juhudi would like to let you know that we have a new Executive Director. His name is Steve Ombere. This follows a restructuring at the organization. Mr. Eliud Akanga Who has been in charge of the organization moves on to take other personal duties. He however remains close to the organization. From now on you will receive updates from Steve. Juhudi would like to thank Eliud for his commitment and support to the organization. 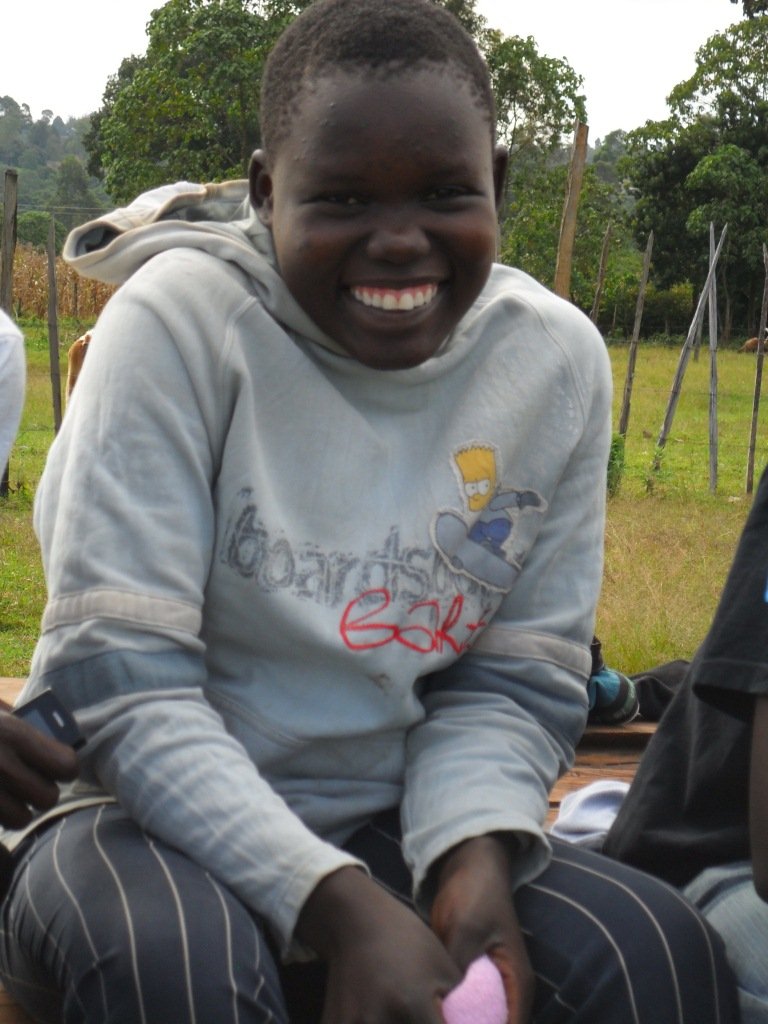 Mss Apio is an 17 year old girl. She is form 1 in a near by secondary school. Set stays with her father's sister. During the August Holiday, she indulged in unprotected sex and became pregnant. She never new about her pregnancy till when we conducted pregnancy test. Juhudi Children staff had a discussion with her guardian about the situation. The guardian was furious and wanted the girl to go back to her father immediately. When the girl was consulted about what would happen, she refused to the idea of going back to her father home. ‘There I would be married off immediately. I am safer here' Mss Apio said. Juhudi Children staff have now held discussion with the father and guardian and an agreement reached about her safety. She will stay with her guardian and resume school once she has delivered. The 17 year old boy who impregnated her together with his parents have also agreed to take care of the baby. This has been a very challenging moment as it is a very sensitive endeavor. Juhudi is happy that the process was successful and Mss Apio is safer. Juhudi did organize a community meeting for the girls and their mothers/guardians to discuss the issue of early marriages and schooling for girls. The girls shared their concerns especially when they get pregnant at home. They feel unprotected. Mothers said there are many challenges facing their daughters. One such case is on high demand by the girls to want so much to look like modern girls. Mothers said, domestic resources are scarce to support their daughters demand. By the end of the one day meeting, both the girls and mothers agreed to create more time to meet and share information at the home level and quarterly organize a joint community meeting. Juhudi want to thank you for your continued support which has seen girls benefit from your donation. 3 Rescued girls did their examination this year and will be hoping to join secondary school in 2011.' I thanks Juhudi for ensuring that I have done my Class eight National Exams' Betty We wish you all the best during Christmas and new year celebrations. 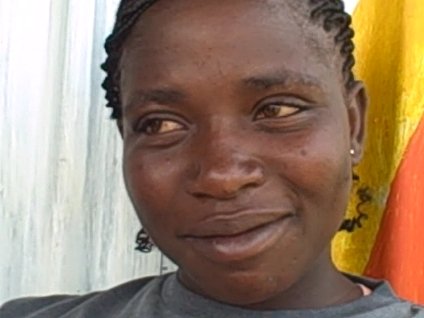 Pascalia Chepkorir is one among 6 girls whom Juhudi is helping to start up small income generating activities. Pascalia dropped out of school in form two and was forced into marriage after getting pregnant and could not continue with her secondary education. She found a boyfriend who helped her bring up her kid but, she got pregnant again. This forced her parents to chase her out of the house due to their culture. She sought refuge from her step-brother from where Juhudi is supporting her do small business of selling vegetables. ‘At least my life is having meaning now. I hope one day I will go back to school or a tailoring college’ Pascalia

The last 3 months Juhudi has been working along the Cherangany Hills and across the Marakwet and Pokot ethnic communities, where girls are forced into Female Genital Mutilation leading to school dropout. As the girls escape from this act or forced marriages, they seek refuge in the safe communities where Juhudi then finds them and offer them support.

We appreciate your continued support, without which Pascalia and other girls would not have had a taste of better life.

We are now providing short-term income generating support to our beneficiaries especially those who have children. What do you think about this!

Two Girls back to school 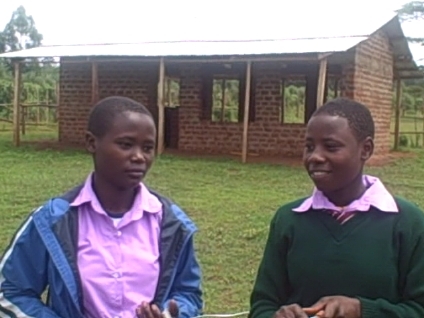 Jane and Ann back to school

Jane and Ann at the end of last year did their class eight national examinations. It was great moment for them after being out of school for more than two years.

This year, the two girls who are beneficiaries of this project joined Form one at St Pauls' Secondary school. 'I never knew one dy I will be abck in school and continue with my dream. My life had been shuttered. I had eloped with ayoung money who later abandoned me' Ann

'Iam very greatful to Juhudi Children and all donors who are giving support to our education. This project has given me a new chance to realize my dream of becoming a teacher' Jane

On the 16th June 2010, Juhudi Children together with other organizations will be celebrating the day of the African Child.On this day, Globalgiving will also be matching all your donations.Make a specil donation on this day.Share with your family and friends to make a donation to rescue gril from early marriage in Kenya

We welcome you to share feedback with us regarding this project.

Donating through GlobalGiving is safe, secure, and easy with many payment options to choose from. View other ways to donate
Juhudi Children in Crisis has earned this recognition on GlobalGiving:

GlobalGiving
Guarantee
Donate https://www.globalgiving.org/dy/cart/view/gg.html?cmd=addItem&projid=2247&rf=microdata&frequency=ONCE&amount=25
Please Note
WARNING: Javascript is currently disabled or is not available in your browser. GlobalGiving makes extensive use of Javascript and will not function properly with Javascript disabled. Please enable Javascript and refresh this page.