Karunaprabha, leader of the project in Pune tells us about the biggest challenges that she and her team have faced when working to empower the girls -

What have been the biggest challenges for you in your work?

In the age group that we work with, girls rarely go out of the house- they aren't allowed. So it is often quite a task to try and convince parents to let them come to our activities. Another problem, even when they are allowed, is that many of the girls in the slums are addicted to watching tv serials so they often decide not to attend the sessions. This habit can catch on to other girls, as just like most adolescents this age, they are very susceptible to peer pressure.

I thought it'd be interesting to get Karunaprabha (the leader of this project in Pune) to share her thoughts about aspects of the project. She kindly answered a series of questions for me, which I'll be sharing with you in the next few weeks!

Question: What do you see as the biggest successes that you have seen in your work?

1. First of all, our efforts mean that we've been successful in creating a supportive environment where the girls can build their self-esteem and confidence.

2. Another big change has been the fact they they all eat healthy food now, and they know about the impact of food on their well-being.

3. It's lovely to see them all interact with one another and make friends - so different to the isolation that many faced before.

4. A major step has been how girls are becoming financially empowered through having done vocational training.

A message from Pranali 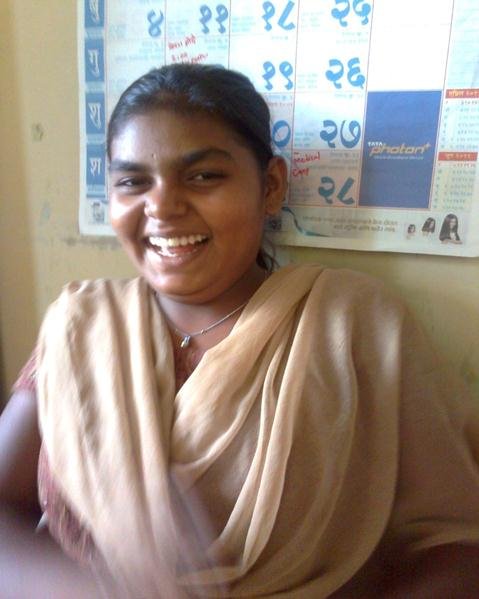 A message to you, from Pranali

Before joining life skill class I was very introverted and shy. I did not feel comfortable to go out of the house and mix with other girls.

After joining the class, I started to change as my confidence built up. My mother was very happy to see these positive changes in me. I really developed trust towards the people in my class and the Project. Every day I used to go to the class.

We girls all visited the orphanage home and felt very sad about the orphan children. We also visited the police station and bank to know how they function. We were happy to play, sing and come together in class.

I was very happy to participate in an adventure camp at Mumbai (Bombay-Karjat). For the first time in my life, I got opportunity to participate in such type of camp. I was very frightened at the time of crossing the valley but bit by bit I started to feel that I can do it - and I did it!

The Project will also be helpful for my future life, and now I feel that I can successfully come out from any obstacles and problematic situation in my life.

I read an article recently by UNICEF exactly about Adolescent Girls' Empowerment clubs in India. It made me understand that projects like ours are on the rise and are making real in-roads all throughout India. The article reaffirmed to me that if long-term poverty, inequality and gender discrimination are to be eradicated in India, the empowerment of adolescent girls is a necessity.

As UNICEF observed, 'early marriage can lead to a vicious cycle of gender discrimination, illiteracy and high infant and maternal mortality rates'. Girls thus find themselves trapped in a downward spiral of marginalization on multiple fronts. Here's the link to the article in case you're interested: http://www.unicef.org/infobycountry/india_58294.html

In my opinion, it's one of the many paradoxes of India that it has some of the most progressive and impressive acts of legislation in the world. For example, child marriage has long been outlawed, and there even exists the right to free and compulsory education of children to act as a buffer to this. The reality on the ground, however, is that there's often a lag between the law on paper and the attitudes and practices of people in society. Of course, this is a massive generalization and there are many exceptions to this. What I'm trying to say, though, is that gender equality remains an uphill struggle in India, which makes projects like ours even more vital.

We know that through this project, progress is being made, minds are being changed, and girls and their communities' are beginning to transcend the mindsets that have long kept girls confined to the house, restricted in accessing education and prone to early marriage.

I met Sonali's family when I visited the project in March (you may remember her, I shared her story with you). They had tried to arrange her marriage a few years ago to a boy that she had never met and against her will. They were at first adamant that she would be married. As Sonali grew in confidence thanks to the project activities and support from Karunaprabha and her team, she was able to resist and insist that she be allowed to continue her vocational training. She now has a job, is earning money independently and when I spoke with her parents they said that they were glad that they didn't get her married young and that they're proud of the life that Sonali has made for herself.

With your support, we can continue changing hearts and minds like this, to create a new generation of empowered and independent women in India.

The sky's the limit 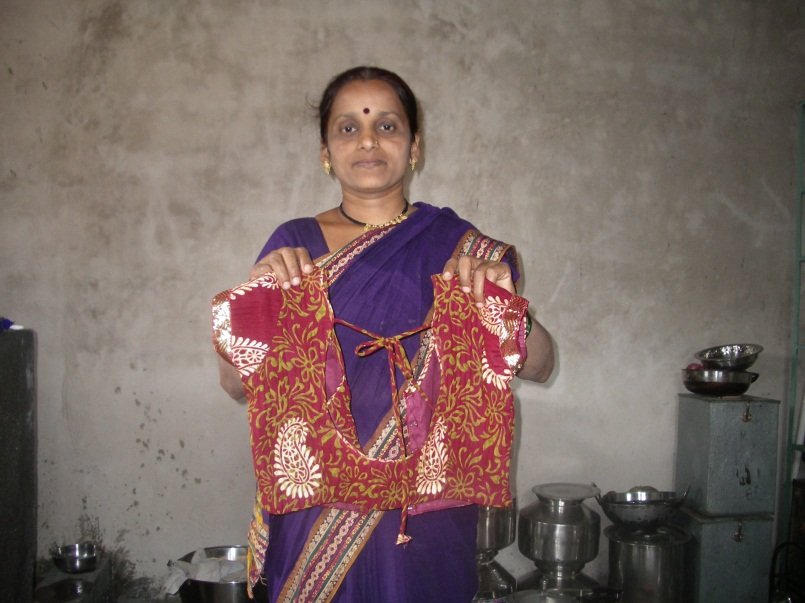 Holding a blouse that she has sewn

When I was in India visiting the project, I got to speak to Shubanghi who has been going to sewing classes run by the project. I was quite amazed by how much impact learning this skill seemed to have had on her life. What remains strong in my mind is her drive and enthusiasm when she spoke about her ideas about the future.

Here is her story:

I started sewing classes six months ago and have completed the course now. When I started I had never earned any money in hand. I just relied on my husband all the time. One person’s money wasn’t enough. Karunaprabha came here and I came to know about the project. She said I could earn my own money and I wouldn’t have to pay fees to learn how to do this. I thought it was a good thing. My husband didn’t want me to leave the house - he wanted me to just stay home and look after the kids. But after I started to learn sewing and I could sew things, he liked it - he even helps me with it now! I taught him how to sew and he does it too! He comes home from work after 3, eats lunch and then he helps me with the sewing.

Thoughts about the future

Now I just want to take this further and further. I can do blouses now and I want to learn fashion design and doing dresses. I could open my own shop or work from home.

What has been the biggest change in your life since doing the sewing classes?

The biggest change has been that before I didn’t have the confidence or aspiration to do anything with my life. Now it’s changed and I want to do lots of new things.