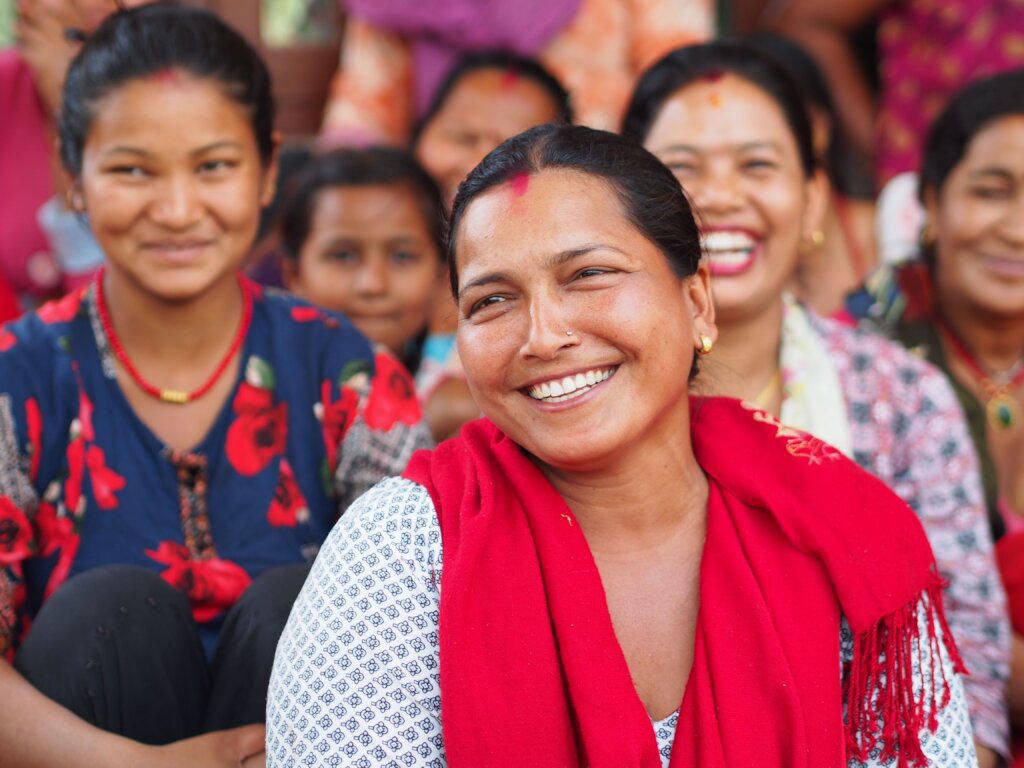 Vasudha is 60 years old and works as a garbage collector. She works long hours and lives in a house made of tin sheets. She shares this house with her husband, four daughters and two sons.

Despite her sons being old enough to earn a living, they are both alcoholics and use her earnings to drink heavily. They are abusive to her when she tries to spend the money elsewhere and she often feels unsafe in their presence.  Vasudha feels trapped and unable to escape from this cycle of addiction that is ingrained within the family.

She began attending support groups, which are run by our partners, where women are encouraged to share their difficulties and create a safe space. At first, Vasudha felt so much shame about what was happening with her sons, that she couldn’t share. But the impact of hearing other women open up about their triumphs and struggles affected her deeply, so she continued to attend.

One day she felt strong enough to talk…

Afterwards, her peers from the group went with her to the local police station, where she received the support needed to face her sons. A police officer spoke to them about their abusive behaviour and outlined what would happen if it continued and the legal action that would be taken. With the backing of the women’s group and the local police, her sons promised they would tackle their alcohol dependence. This is being monitored by the project.

Vasudha can now lead her life independently and use her wage according to her wishes, and hers alone.

Without your support, women like Vasudha can’t see a way out of their circumstances. All it takes is community support and encouragement for big changes to happen and self-confidence to thrive. 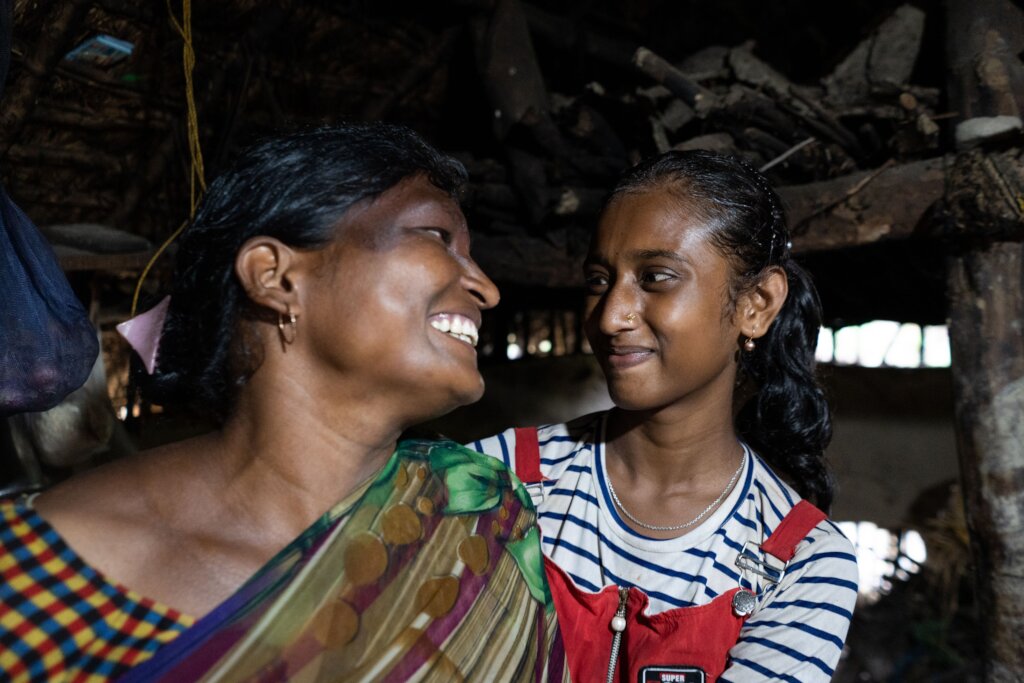 Sharmilla had just finished her school exams and felt like the whole world was waiting before her. She was 17, full of energy and charisma for life, then her grandmother said she must marry someone and soon.

Sharmilla’s family struggle financially. There are eight people in the household and marriage can be a way out of this. Usually, girls at this young age don’t feel like they have any autonomy and yield to their family’s wishes. However, Sharmilla had been to our project’s meetings. This project focuses on teaching girls and their families the importance of education and a life committed to choose for themselves.

Sharmilla’s mother had also been to the meetings and has reconsidered what she wanted for her five daughters. So, together they discussed with Sharmilla’s father and grandmother, the negative and potentially harmful effects of child marriage.

‘I want to be educated and stand on my own two feet’said Sharmilla with a newfound confidence.

Thanks to the support of her mother and increased knowledge of her rights, the marriage has been cancelled. With the support and encouragement of the project, Sharmilla wants to continue education.

To so many young girls, this would never be an option. Our work still has a long way to go in successfully changing long-standing attitudes in society, towards girls and education. Like we have seen with Sharmilla’s mother, family support is crucial and a core focus of this project.

Thanks to your support, we are continuing to facilitate these important conversations and keep girls in school. 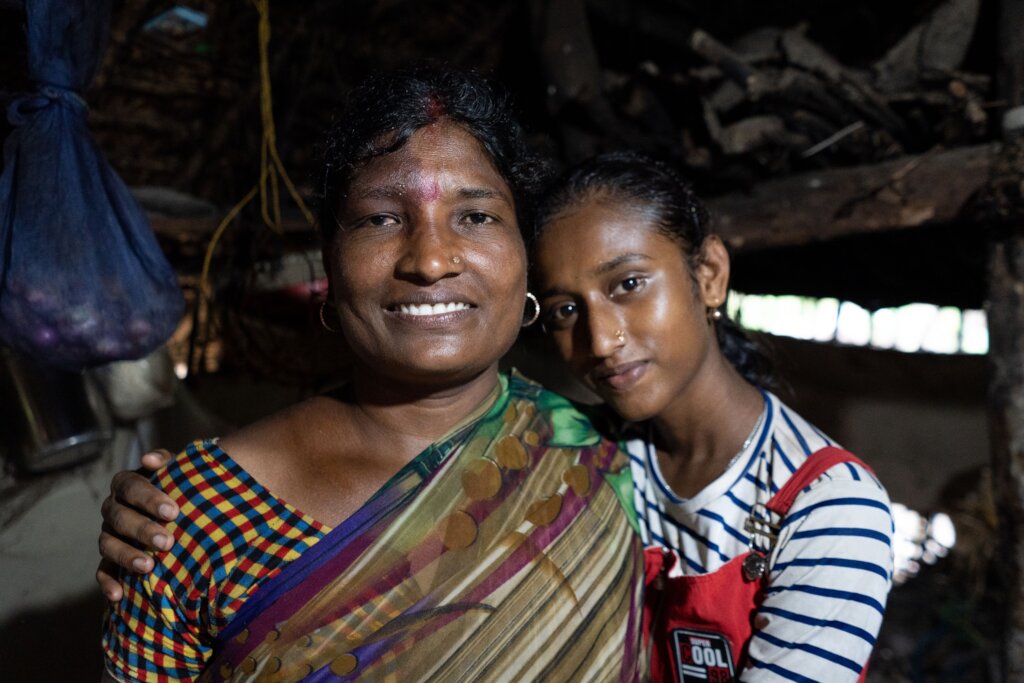 Will Wakeeta be a child bride? 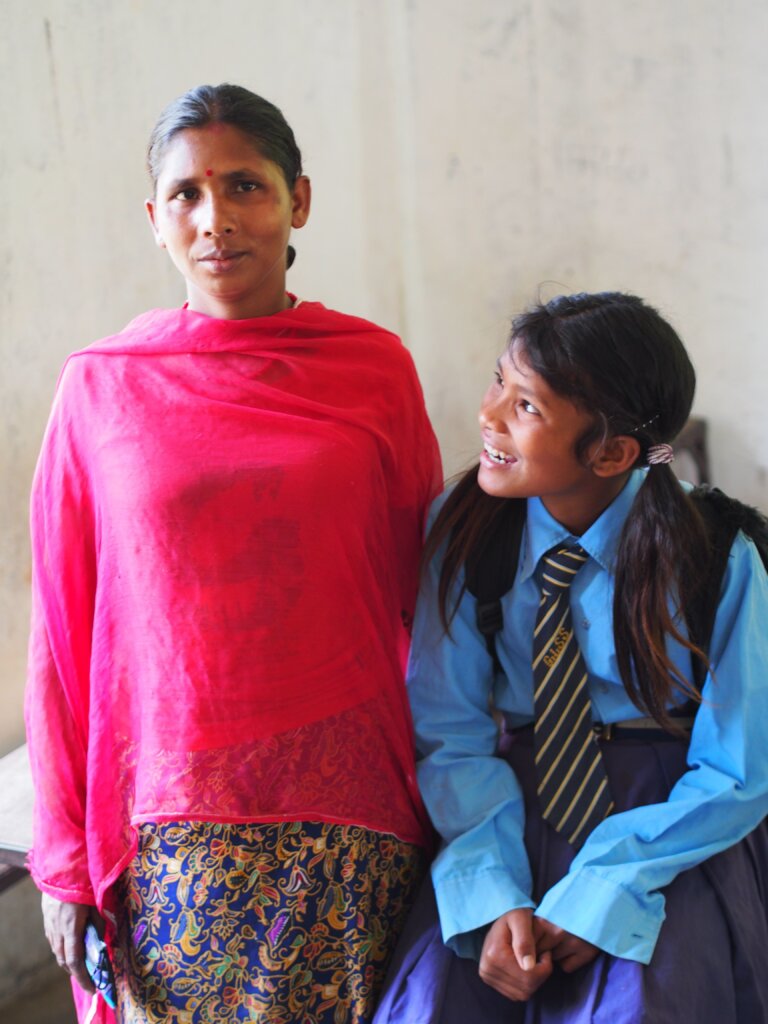 Did you know that in India, 12 million children are married before their 18th birthday?

Niharika is a mother to a young girl, Wakeeta. In their community, child marriage is extremely common. This is particularly true in low-income families like theirs, as the cost of providing for their children is simply too high. Sadly, this is likely to be Wakeeta’s fate too.

However, Wakeeta began attending nearby classes run by our partner’s project, encouraging young girls to come together and engage in group activities. Niharika could see how much Wakeeta was enjoying it, so she signed up for the mother’s support workshops too. There, they discussed child marriage and the possible harmful effects it can have on girls and their education.

There was a big shift in Niharika. She became informed for the first time about the importance of education and how it could have such a huge impact on her daughter’s life.

Niharika decided not to marry Wakeeta at a young age, placing her in education instead, with the supported by the group.

In spite of criticism and judgement from family and peers, Niharika remains firm in her decision to postpone Wakeeta’s marriage and pursue higher education for her daughter.

This shows the influence these classes can have, shifting the trajectory of young girl’s lives forever.

Thanks to you, we can work towards freedom and choice for more girls.

A story of how girls can change the world... but first their village. 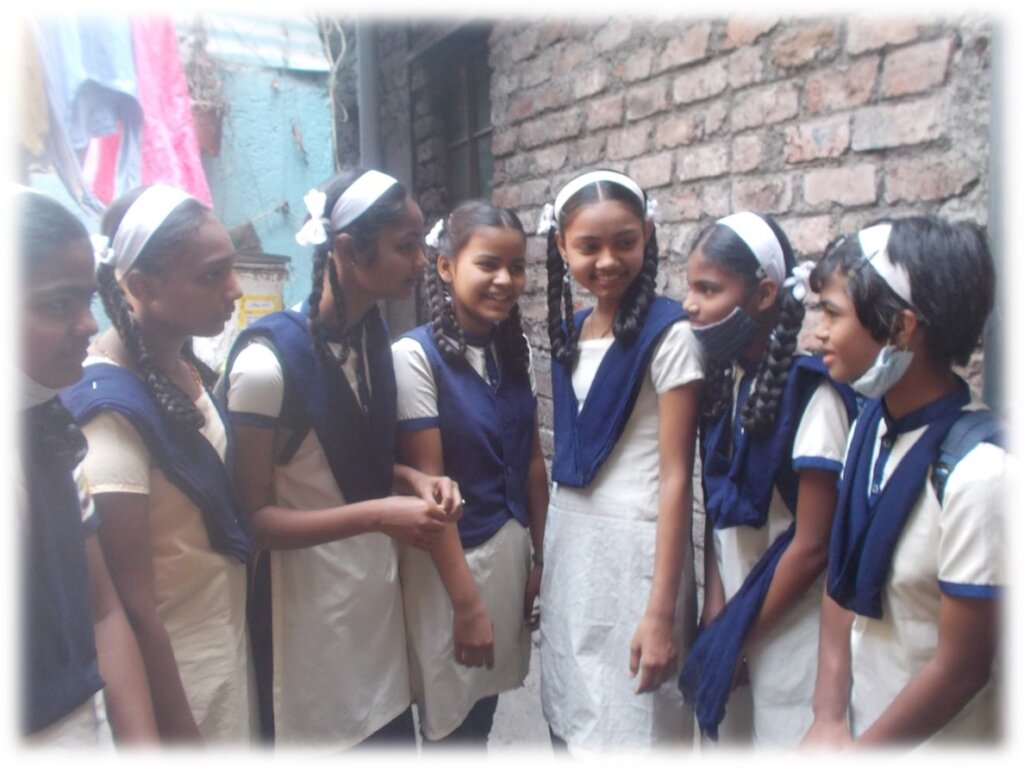 Girls often receive abuse whilst either walking to or whilst studying at school, this frequently leads to them dropping out of school or low attendance at the very least.

Sai feared going to school, as on the journey there, she was harassed and teased by boys in a neighbouring community. As you can imagine, this caused a lot of stress and meant she had to face the unfair dilemma of whether to get an education or not.

Luckily, Sai had good friends, who wanted to support her, so they decided to alert the teacher what was taking place every morning. Unfortunately, their teacher wouldn’t listen and refused to take action, leaving them without help.

The girls were so determined, they took this issue and voiced it in one of our partner’s community groups. They've created a safe support network for young girls to voice their feelings and express any difficulties. With the kind listening ear of one of the group leaders, they decided to collectively support their friend Sai and together they would approach the group of boys and ask for them to stop. This is no easy task! But together they had the courage to do so.

The next day on their way to school, they approached the boys, as they have learnt about their rights from the community groups, they said if it carried on, they would go to the police. The boys hearing this, promised to never again call Sai names and since then they have left her alone for good!

Inspired by this powerful example of what friendship and community support can do, Sai and her friends had regained their confidence. They wanted to make sure no other girl went through this. So, with the help of our partners, local leaders met with the girls and heard their story. Impressed by the example and saddened to hear this regularly happens to so many girls, local leaders offered their services and attitudes transformed in that meeting.

Thanks to increased awareness of their rights, girls can collectively come together and make change, this is where your generous support is going to. Thank you!

What if you had to choose? 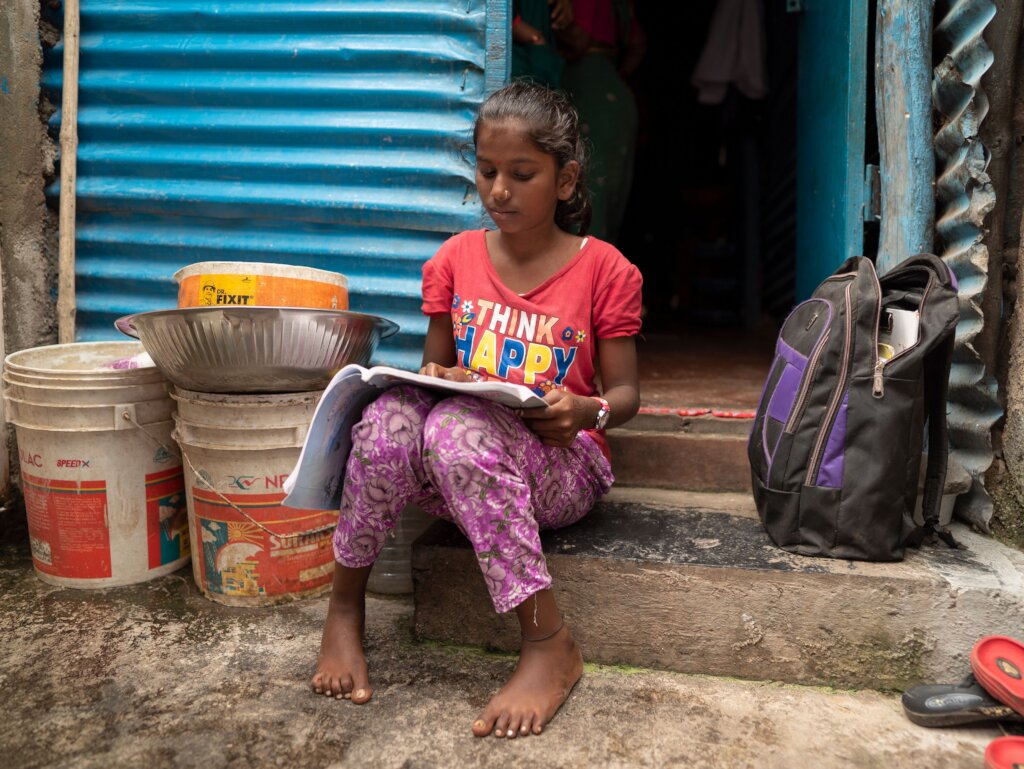 Can you imagine having to make the decision between school or caring for your younger siblings?

Many young girls face this every day in India, including Nitara.

Nitara, 12 years old, lives in extremely poor conditions, in a metal sheet house in Pune. Both her parents are daily wage workers, labouring hard, long, hours to earn an insubstantial income for their family. This puts Nitara in a position of responsibility to look after her two younger siblings and the running of the house. Nitara felt overburdened by these many responsibilities, especially for her age.

Nitara couldn’t attend school, and was missing crucial education, but it seemed that nothing could be done.

Our partners’ social worker noticed that Nitara wasn’t attending local meetings and chased up her school, to see that she failed to make it there too. They decided to visit her at home to access the situation. Soon after, they met with Nitara, who was isolated and overstretched. Nitara expressed her wish to return to school and continue her studies, so our partners in Pune's team sprung into action, to help achieve her goal.

After meeting with Nitara's parents and discussing the importance of her education and wellbeing, they assisted with her younger siblings’ admission into a nursery, to help with childcare.

Nitara would now be free to continue her studies and pursue being a police officer! We got reports from her teachers saying that she is excelling, has successfully completed all assignments and is improving her grades by the day.

There are still countless young girls who are facing difficulties accessing education. With your support, our partners can continue their valuable work in helping girls achieve their dreams.