"You are all very kind!" 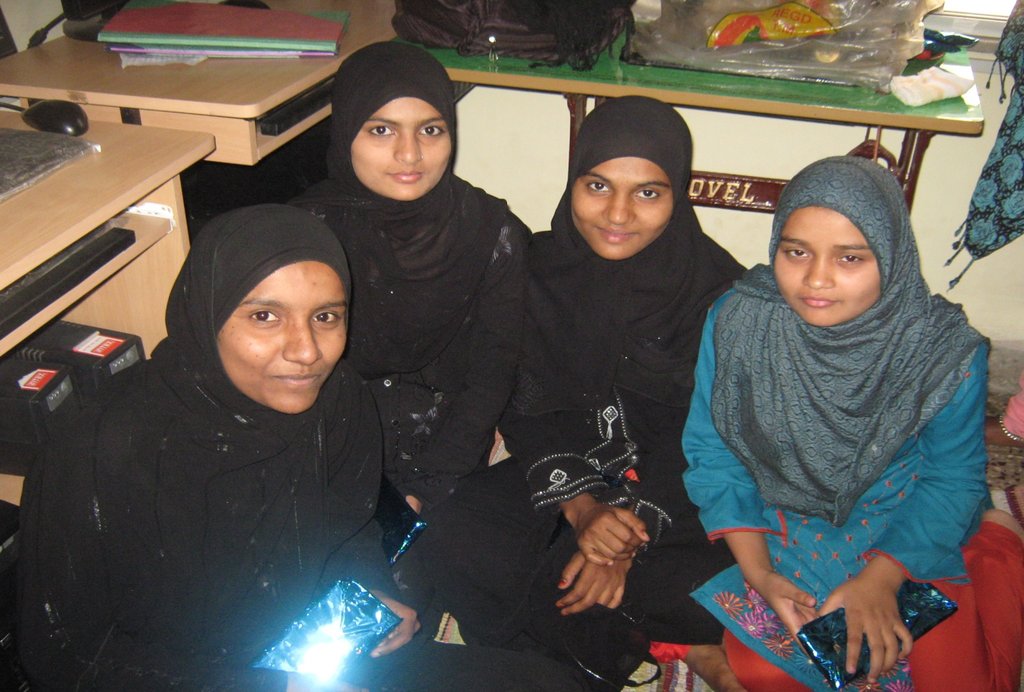 Rubina is second from right.

(You are all very kind! You have changed our lives!)

"My family has seven members. Father is wage labourer and mother is a house wife. My elder sister is married and my brother is working at 'diamond pool'. My younger brother and sister are in school.

I am in 12th STD in an Urdu school called Anjuman Islam.

One day I came to know about the life skill classes. In our community girls from our religion are not usually allowed out of the house. Fortunately, the life skills class teachers came to my house and my friend’s and persuaded our parents to send us to the classes. We wear our Muslim 'Burkha', and come to class. I don't like to wear it, as it covers our whole body and face.

We started to go to life skills classes which were conducted in a common community space in our neighbourhood.

"We are 4 members in our family. My husband is a driver. I have 2 small children. My education is not much. I left my school when I was in 5th STD because I have to look after my younger sisters. In the age of 17 my parents arrange my marriage. After my marriage I used to sit at home and started loosing my confidence to do something or learn some new skills because of having very less education. One day I heard about stitching class in our community. It seems to get a ray of hope for me. I prepare my mind and decided to go to class to take more information about it."

"One day I went to the place in my community where the foundation conducts stitching classes. When I went there I told the foundation’s staff about my education. And I got very positive answer which gave me the opportunity to change my future.

The staff of the foundation builds my confidence and told me to join the class though my education was up to 5th STD only. Teacher at the class was very co-operative and patient. They trained illiterate women also.

Slowly I learn to stitch the blouse and overjoyed. Now I can stitch superior. I am also getting orders of blouse from outside.

I am proud to learn this skill and earn money. My husband is very happy as I am capable now financially.

I also want to learn and stitch Panjabi suits in future."

The Plight of Dalit Women

My name is Keval Shah, and I thought I'd briefly take this opportunity to introduce myself. I am taking over as GlobalGiving Project Leader from Jilna, who has had this responsibility until now.

I have been at Karuna for six months now, and am greatly enjoying my time here. I was fortunate enough to spend a year in India before I came to work here, and spent some of that time with dalit communities in urban slum areas. I was struck most by the apparent hopelessness of the situation for so many of the women there. This dire state of affairs, which is a living reality for so many, is summed up in the words and speech of Dr. Ruth Manorama, which I share below.

I am so grateful to be able to contribute to such a worthy cause, and thank all of you for doing the same.

I look forward to posting more updates in the future

"Eighty million Dalit women in India encounter the cumulative impact of discrimination in their day to day lives. They are denied of their dignity, livelihood and social security and everything that is humane and just. Women continue to suffer discrimination based on “work and descent”, which lead to social exclusion, physical separation, degrading of occupation like manual scavenging, violent appropriation and sexual control by men of the dominant caste, evident in systematic rape of Dalit women and perpetuation of forced prostitution in the name of religion through the Devadasi system. The state and non state upper caste actors act with impunity, violating domestic and international human rights law.

Dalit women have to grapple with the discrimination due to caste hierarchy and untouchability on the one hand and extreme economic deprivation and poverty on the other coupled with political, legal and religious-cultural discrimination. They are thrice alienated, by caste, being lower than others; by class, being the most poor and by gender, due to patriarchy."

After finishing 12th standard, I was just at home not doing much. One of the ladies from the project came to my house one day and gave me information about the computer course. My parents allowed me to do it – I was really happy, because it had been my dream to learn how to use computers.

It wasn’t just learning how to use a computer – I also learnt about communication, nutrition, how to prevent anemia and other important things like these.

At the moment I’m working in an ice-cream parlour. I can really feel how important the computer course was for me, as I use these skills in my job a lot.

Before joining the course I was very shy and found it hard to mix with other women and girls. But now, I like to share my thoughts.

I can actually earn money – the course helped me to get a job at a dress designer’s shop, so I now have financial independence.

I’m very grateful to the project.