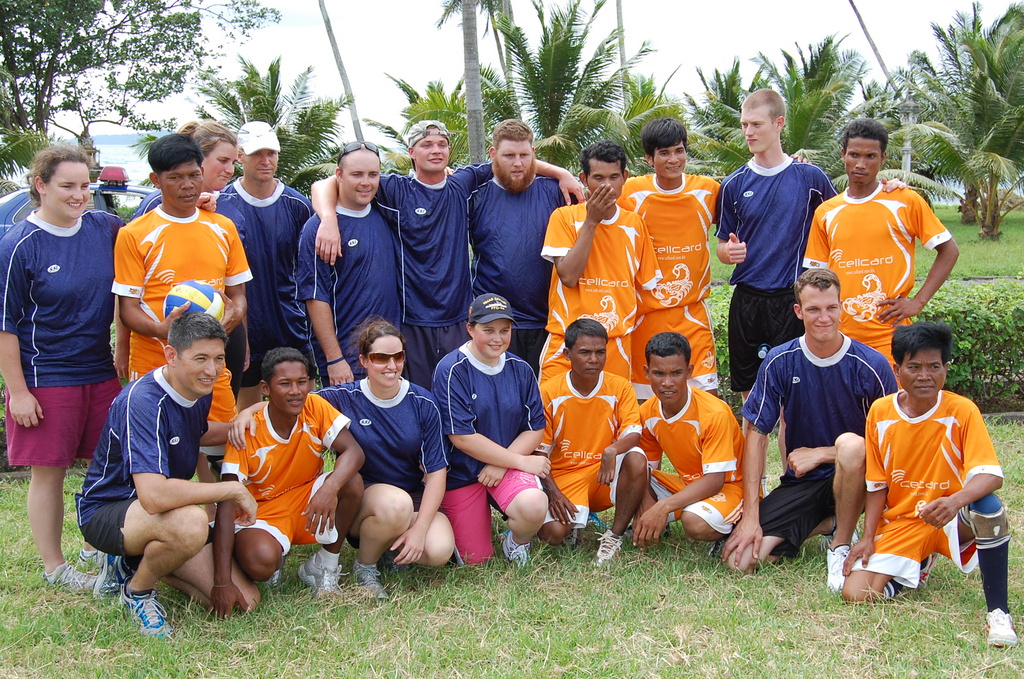 The CNVLD was honoured again to be invited to the Royal Cambodian Navy – Australian Defence Forces Sports Afternoon at Ream Naval Base on 22nd September continuing a tradition that began in 2005 with the first ever match against the crew from the HMAS Adelaide. For the last two matches, the CNVLD has been represented by the Kompong Speu Global Giving Scorpions.

The Royal Cambodian Navy – Australian Defence Sports afternoon is an event in the greatest tradition of affirming bonds of friendship and solidarity between nations through the unique power of sport. Attended by the Admiral of the Royal Cambodian Navy and his senior officers, the Commander of the HMAS Darwin, the Australian Ambassador to Cambodia and the Australian Military Attaches to Cambodia Office, the event is nonetheless an opportunity for everyone to enjoy the sea air.

he HMAS Darwin team arrived on the court looking the business resplendent in their official team uniforms with at least three players over 6 feet and a healthy row of substitutes. Never a team to buckle to nerves or appearance, the Scorpions quickly set about dissecting the HMAS Darwin crew with a rapid succession of bullet velocity spikes.

Before HMAS Darwin could blink the first match was crisply concluded 25-5. The Scorpions refused to let up on the esteemed visitors however and swiped the second match 25-09. After a quick refreshment break and a healthy rotation of substitutes, the Aussies gelled and threatened to take the initiative as the early stages of the third match stayed neck and neck. But the Scorpions aren’t the currently ranked #2 team in the 2009 Cellcard National Volleyball League for nothing and Sarath’s domination at the net ably assisted by veteran Phat Yoy saw the Cambodians cruise through to victory 25-15.

The Cambodian Navy also fielded a volleyball team for the first time this year and all were eager to test their skills against the mighty Scorpions. After their comprehensive defeat at the hands of Scorpions the HMAS Darwin team quickly recruited Pin Sarath, Phat Yoy and Im Phiream to join their team for their match against the Cambodian Navy. The Navy team were determined to put up a spirited fight against the ‘chunpikar’ outsiders and displayed great tenacity though to little avail as the joint CNVLD-ADF team won the match 25-23 to the huge delight of team and supporters alike.

Later in the afternoon, the HMAS Darwin football team ground out a 2-1 victory over the Cambodian Navy team to take home the Cambodian – ADF Football trophy for the first time in the 5 year history of the event.

The event garnered considerable local media coverage with TV crews from CTN, TV5, Bayon TV and TVK all in attendance. The CNVLD was also accompanied by a Finnish documentary film crew from Finland who are making a 30 minute film on the CNVLD focusing on the lives and athletic endeavours of the Kompong Speu Global Giving Scorpions.

The CNVLD wishes to express its gratitude to the Australian Defence Forces and the Commander and Crew of HMAS Darwin, the Royal Cambodian Navy and Australian Ambassador to Cambodia Margaret Adamson for their continued support and friendship to the Athletes with a Disability of Cambodia.

CNVLD features in Time Out Singapore

The CNVLD features in the latest edition of Time Out Singapore.

View the article via the following link:

The Kompong Speu Global Giving Scorpions volleyball team will travel to Ream Naval Base on 22 September to play against a team from HMAS Darwin.

As part of the ongoing ‘Stand Up Challenge’ and in recognition of the historic bonds of solidarity and friendship between the Kingdom of Cambodia, Australia and the CNVLD, the Kompong Speu Global Giving Scorpions volleyball team will play against the HMAS Darwin volleyball team as part of the Cambodian Navy / Australian Department of Defence Sports Afternoon.

The HMAS Darwin is a long-range Adelaide Class escort frigate that undertakes roles including area air defence, anti-submarine warfare, surveillance, reconnaissance and interdiction. The ship is capable of countering simultaneous threats from the air, surface and sub-surface.

Since 2005, the CNVLD has played matches against teams from HMAS Adelaide (2005, 2007), HMAS Toowoomba (2006) and HMAS Bathhurst (2008) with the Kompong Speu CTN Koupreys and Kompong Speu Global Giving Scorpions winning on all four occasions. During their visits to Cambodia, the Australian Defence Forces also engage in local community work, such as helping to build schools and latrines.

The Kompong Speu Global Giving Scorpions are one of the most exciting, dynamic teams in the 2009 Cellcard National Volleyball League. The Scorpions are coached by Pin Sarath, one of the outstanding members of the Cambodian National Team who took Bronze at the historic 2007 WOVD Cambodia Standing Volleyball World Cup and will also play a key role in the Cambodian Team’s attempt to claim World #1 at the 2009 WOVD Cambodia Standing Volleyball World Cup scheudled for December.

The Scorpions currently stand 2nd in the 2009 Cellcard National Volleyball League standings and are striving hard for a place in the 2009 Grand Finals at the Olympic Syadium Phnom Penh on 16th October 2009.

Since 2007, the CNVLD Armed Art programme has provided a unique perennial trophy designed by Australian engineer and ABV Val Sutherland and manufactured from destroyed weapons to the winners of the Annual Australian Defence Forces - CNVLD Volleyball Match. Yet having been torpedoed by the Athletes with a Disability of Cambodia on the last four occasions, the Armed Art trophy has yet to take pride of place in the Australian Embassy Phnom Penh.

The CNVLD wishes to thank the Australian Government Department of Defence and the servicemen and women of HMAS Darwin for their continued support for the Athletes with a Disability of Cambodia and the Kompong Speu Global Giving Scorpions look forward once again to battle on the court of Ream!

The CNVLD and Australian Defence Forces:

Watch films from one of the oldest and most successful sports and development projects in the world: The CNVLD. Winner of a UN﻿ Best Practices Sports and Development in 2006, the CNVLD provides sporting and socio economic opportunity to landmine survivors and persons with a disability of Cambodia. Major programmes include the 2009 Cellcard National Volleyball League, the Cambodian National Standing Volleyball League, the ANZ Royal CNVLD Wheelie Grand Prix, Armed Art and national and international exhibition design. Find out more about the CNVLD on: www.standupcambodia.net