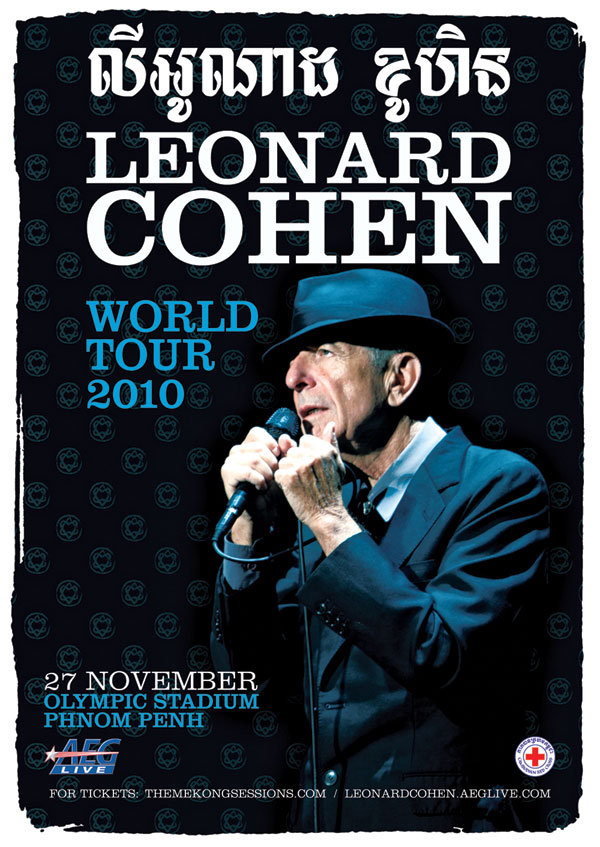 Thanks to the exceptional generosity of Leonard Cohen and AEG Live, proceeds from the Leonard Cohen Live in Phnom Penh concert on 27 November 2010 will benefit the Cambodian Red Cross and Cambodian athletes with a disability.

The Leonard Cohen Live in Phnom Penh concert at the Olympic Stadium will be performed under the patronage and in the presence of Lok Chumteav BUN RANY HUN SEN President of Cambodian Red Cross, marking it as one of the ASEAN gala cultural events of the year.

The Cambodian Red Cross (CRC) is the largest humanitarian organization in Cambodia. Established on 18 February 1955, it is officially recognized by the Royal Government as an auxiliary to the public authorities in humanitarian services to relieve the sufferings of the most vulnerable.

Acknowledged by the International Committee of the Red Cross (ICRC) on October 7 1960, the CRC was admitted as a Member of the International Federation of Red Cross Red Crescent Societies (the Federation) on 8 October 1960. However, during the Khmer Rouge Regime (1975-1979), all Red Cross activities in Cambodia were suspended and the CRC's seat in the General Assembly of the Federation was left vacant. Between 1979 and 1994, the CRC lost its national unity as each of the four warring factions in Cambodia set up their own Society within their respective areas of control. However, the NS was reunified in 1994 and the CRC was reinstated to the Federation.

Humanity The International Red Cross and Red Crescent Movement, born of a desire to bring assistance without discrimination to the wounded on the battlefield, endeavors, in its international and national capacity, to prevent and alleviate human suffering wherever it may be found. Its purpose is to protect life and health and ensure respect for the human being. It promotes mutual understanding, friendship, co-operation and lasting peace amongst all people.

Impartiality It makes no discrimination as to nationality, race, religious beliefs, class or political opinions. It endeavors to relieve the suffering of individuals, being guided solely by their needs, and to give priority to the most urgent cases of distress.

Neutrality In order to continue to enjoy the confidence of all, the Movement may not take sides in hostilities or engage at any time in controversies of a political, racial, religious or ideological nature.

Independence The Movement is independent. The National Societies, while auxiliaries in the humanitarian services of their governments and subject to the laws of their respective countries, must always maintain their autonomy so that they may be able at all times to act in accordance with the principles of the Movement.

Voluntary Service It is a voluntary relief movement not prompted in any manner by desire for gain.

Unity There can be only one Red Cross or Red Crescent Society in any one country. It must be open to all. It must carry on its humanitarian work throughout its territory.

Universality The International Red Cross and Red Crescent Movement, in which all Societies have equal status and share equal responsibilities and duties in helping each other, is worldwide.

The Athletes with a Disability of Cambodia

Starting with a simple mandate in 1995: ‘to raise awareness of disability and landmines in Cambodia’, the Cambodian National Volleyball League (Disabled) - CNVLD has successfully established the world’s only national standing volleyball league, nurtured a Cambodian National Volleyball team to World No. 4 ranking, developed a national wheelchair racing programme with a special focus on women with a disability, brought an Asia- Pacific Championship and two Standing Volleyball World Cups to Cambodia, and has persuaded Leonard Cohen to play a benefit concert in Phnom Penh on 27.11.10 in support of PwDs of Cambodia. The CNVLD is the ONLY organisation in Cambodia to receive a UN Best Practices Award for Development and international institutions openly recognise its successes as being a decade ahead of the now global interest in sports and development.

PwDs remain among the most marginalised in Cambodian society with exceptionally limited access to education, healthcare and employment opportunities. Through participation in the highly disciplined CNVLD sports programmes, 75% of more than 2000+ CNVLD athletes have gone on to gain meaningful employment and become acknowledged, respected leaders in their communities. Through strictly managed, equitable training subsidies and prize money, the CNVLD provides a sustainable basis for personal empowerment and fiscal responsibility. Since 2007, the CNVLD has achieved sustainability through corporate sponsorship with a clear, unwavering belief in the need for encouraging corporate social responsibility as a means to push social justice issues and provide support for the most vulnerable in society.

The National Volleyball League and ANZ Royal Wheelie Grand Prix offer the most lucrative prizes in Cambodian sport and all CNVLD athletes now have personal bank accounts. Oversight of all finances by ANZ Royal Bank guarantees the highest levels of transparency. By hosting increasingly prestigious international events, the CNVLD directly and indirectly stimulates broad sectors of the local economy, driving further demand for transparency and quality. In creating and encouraging inspiration and hope through the unique power of sport, the CNVLD acts as a catalyst for individuals and communities to stand up with dignity and pride, accelerating their emergence from often crippling poverty. The organisation provides an essential service in a highly challenging environment and its scope is limited only by resources given the 40,000+ Cambodian landmine survivors and a rising disability demographic through traffic and industrial accidents.

Beyond the immediate impact on the persons with a disability, one of the greatest unsung achievements has been the successful recruitment of over 300 young Cambodians from highly reputable corporate entities such as ANZ Royal Bank, Cellcard and Digital Divide Data who work as volunteers at CNVLD sports events. Volunteerism remains in its infancy in Cambodia and the efforts of these young Cambodians, who effectively manage all aspects of the events, in support of the athletes with a disability of Cambodia and the world continues to be truly remarkable and ultimately a stinging rebuttal of claims that self interest prevails among local youth.

The 2009 Cambodia Cellcard WOVD Volleyball World Cup saw six nations compete to capacity 5000 people crowds at the Olympic Stadium, whose dilapidated state almost made the event impossible to host. During the tournament, 14 hours of live prime time television coverage on CTN saw the entire nation rejoice in pride that the global sporting community was returning to Cambodia. Eventual winners and three time World Champions Germany subsequently voted the event the ‘Best World Cup we’ve ever attended’ and after receiving unabashed support from local fans in the final after Cambodia went out in the semis, many of the German team were reduced to tears of joy. The entire team have pledged their attendance at the Leonard Cohen concert.

In 2011, Cambodia will once again welcome athletes with a disability of the world to the Olympic Stadium, thanks to the proceeds from the Cohen concert allowing a full interior refurbishment and renovation, for another Volleyball World Cup - the third to be hosted in the nation in 4 years.

Since 1995 the CNVLD has established a national disability sporting infrastructure, pioneered corporate social responsibility in Cambodia and irreversibly altered attitudes and perceptions towards athletes with a disability who are now considered the nations true sporting heroes. None of this existed or was believed possible prior to this impetus. The CNVLD’s efforts have gained consistently high profile global media coverage in the world’s most prestigious publications whose unerringly positive portrayals of the achievements of the athletes with a disability of Cambodia have impacted immensely on perceptions of landmine survivors and Cambodia. In 2010 PwDs of Cambodia are a source of pride to the nation and encapsulate its future hopes.

The CNVLD has undoubtedly succeeded beyond all expectations: from its inception - with 10 athletes sourced at a post-conflict rehabilitation camp - to a globally recognised, award-winning institution whicdespite often struggling with resources, has become a permanent, revered part of the Cambodian social landscape. The CNVLD has worked tirelessly since 1995 with staff on volunteer level remuneration and has been a consistently outspoken critic of the excesses and failures of the aid and development industry.

The athletes and the wider disability community consider the CNVLD their own and trust it implicitly. Working to a strict results-driven mantra, the CNVLD’s hugely significant contributions as a local Cambodian organisation are unquestionably Cambodia’s gain.

Ther Mekong Sessions thanks Leonard Cohen and AEG Live for their generosity in assisting Cambodian Red Cross and the athletes with a disability of Cambodia. 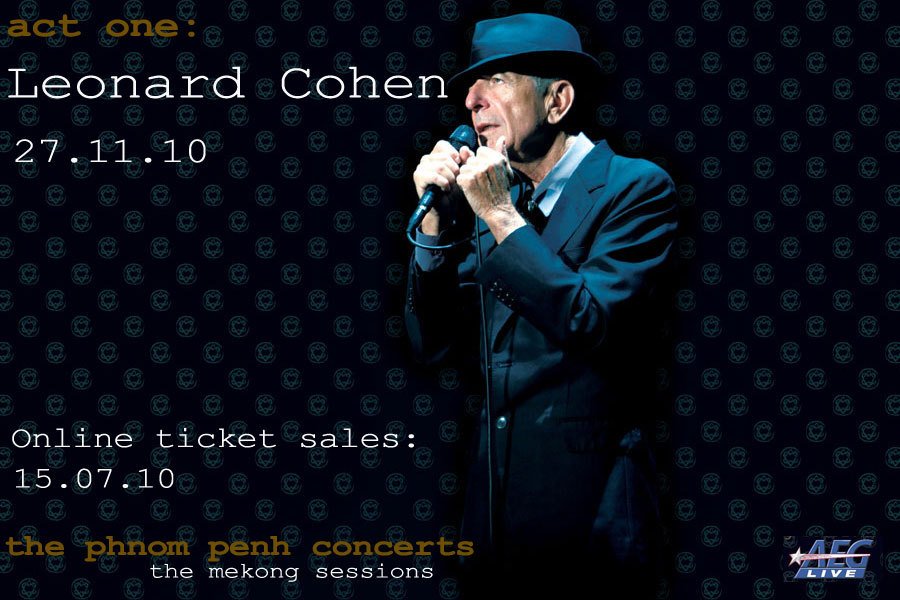 The Mekong Sessions is pleased to announce the formal dates for the sales of tickets to Leonard Cohen Live in Phnom Penh at the Olympic Stadium on 27 November 2010.

600 tickets have been reserved for Cambodian residents given the phenomenal level of local interest with high pre-sales also anticipated through fan clubs. “Tickets for Cambodian residents will be available for purchase online via a special ticketing link 24 hours before the general release of tickets on July 15,” Mr. Christopher Minko CEO Mekong Sessions said, advising fans to book their tickets quickly due to the very high demand.

All ticket sales are only available online. No telephone bookings will be accepted. The following linnks will go live at the times below:

Resident’s presales will be disabled at 08.00 GMT July 15 and tickets must be collected from the Mekong Sessions office by the end of July.

By the mekong sessions - CNVLD

To celebrate and contribute to the restoration of the majestic city of Phnom Penh, Cambodia, Leonard Cohen will perform at the Olympic Stadium on November 27, 2010. To aid victims of Cambodia’s recent tragic past, proceeds from this concert will benefit the Cambodian Red Cross and Cambodian persons with a disability. Tickets available online on July 15, 2010.

The CNVLD is proud to announce its participation by invitation in the National Geographic Global Action Atlas project.

The National Geographic Global Action Atlas project is an exciting and innovative new initiative with a mission to engage people to discover and support a planet-spanning array of local efforts to solve the major challenges facing society and nature.

Global Action Atlas' vision is to tap the worldwide reach and convening power of National Geographic to mobilize a vast corps of concerned world citizens to support thousands of local projects that will collectively bring positive change to the world.

The GAA web platform has subsequently been created to help nonprofit organizations tell engaging stories of their efforts to solve major world problems at local scales. By publicizing these stories broadly and providing opportunities to act, National Geographic hopes to mobilize a large group of concerned citizens to spread the word and actively support and follow the work of the CNVLD.

An integral part of GAA is encouraging donations through the Global Giving network, of wich the CNVLD has been a priority project since 2009.

Click on the link below to visit the CNVLD YouTube Channel and watch the Transworld Sport programme!