Clare Rutz is a student who is traveling throughout Asia this summer and visiting a number of GlobalGiving projects. On June 15th she visited "Cambodian Disability Sports Development." When asked what she would tell her friends about this project, Clare said: “Incredible: You need to see this!"

This is Clare Rutz reporting from Phnom Penh in Cambodia.

In my traveling guide there is a serious bolded warning about going off the beaten path in Cambodia. Landmines are still scattered throughout the country from the brutal days of the Khmer Rouge, and the ones to discover them are unfortunately sorry they had. In America there are facilities and opportunities for the disabled, but in Cambodia it’s another story. They are often cast aside without being given a purpose. The CNVLD addresses this pressing issue by supporting three hundred athletes across the provinces of Cambodia. After years of intense and disciplined training that teaches the athletes self-motivation and confidence they discover the hope they had lost. These tools prepare them for the years to come, and 70% of the athletes go out into the workforce after their time with the team.

These positive efforts often have a ripple effect and rarely stop with the beneficiary. The Slowly the volleyball teams are getting the attention they deserve. They placed third in the world and have become the nations sporting heroes. The ANZ Royal Bank who sponsors a team and manages CNVLD’s funds was asked to put a ramp in for those with wheelchairs at one bank in Phnom Penh. They agreed and then decided to equip each of their banks as handicap accessible. Soon after other companies followed their lead. There is a positive social impact that filters into the community that doesn’t even stop there. Awareness is raised, jobs are had, hope is given, and confidence is acquired. Hope should not be underestimated. It can give someone’s life back.

The wheelchair-racing program equips both men and women with racing equipment and they find the (usually one) paved road in their village and devotionally practice. Before the program many of the participating women were stuck in their huts without the ability to leave. After going through the racing program many move on to be trained to work at the ANZ Royal Bank with a salary and benefits.

Chris Minko, CNVLD’s founder, speaks clearly about the long-term commitment CNVLD has with their athletes. He comments, “The development of individuals who sometimes were beggars or alcoholics can take years. You can’t put a time frame on things.” Sports allow these athletes to integrate themselves back into the community with pride and confidence. The CNVLD staff, which is quite small for the big work they’re doing, work with each athlete on an individual basis while they are trying to expand their program. The need to expand and recruit more people for the volleyball teams and racing program is critical, but CNVLD is greatly limited by their funds. The juggling of funds is a large part of Minko’s job, but his commitment to the teams never falters. There is nothing fancy about the office, and Minko takes a tuk-tuk to each of his meetings. The teams take public buses to training and tournaments and it’s clear that not a single dollar is wasted. CNVLD was awarded the UN Best Practices because of their fiscal transparency made possible by allowing an international bank manage their finances. It’s often hard to know your money is going into the right hands, but it seems that CNVLD is a role model to all grassroots organization that work with both the community and the government in order to build long lasting and trusting relationships with the local people.

In a weeks time there will be meeting with all the coaches (all very serious looking German guys) that will mark the beginning of the 2009 volleyball season. I personally am rooting for the Scorpions whose jerseys will bear the GlobalGiving logo across the back. I just like the name.

The Breakthrough - Social Entrepreneurship at its Best - Cellcard Join the CNVLD! 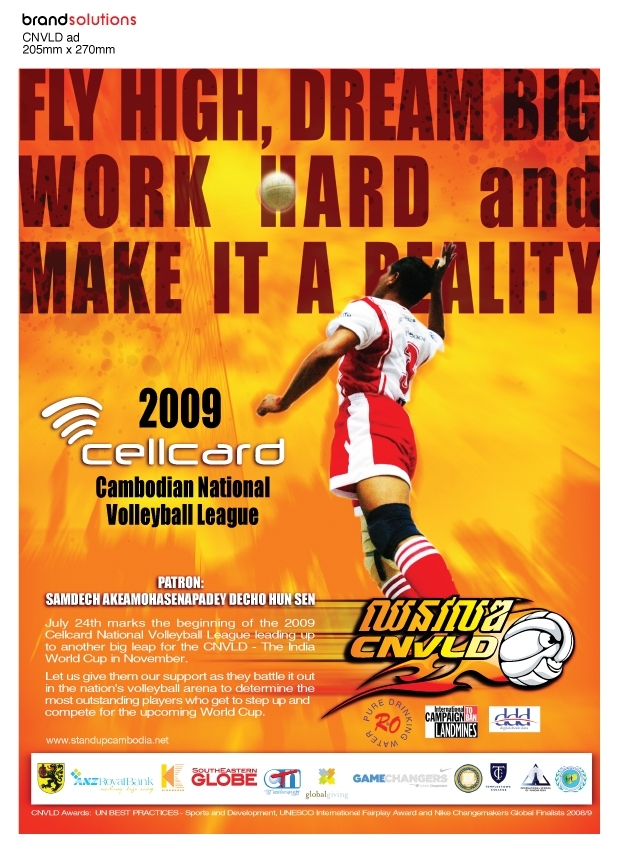 The Breakthrough - Social Entrepreneurship at its Best - Cellcard Join the CNVLD! The CNVLD is proud to announce the Cellcard 2009 Cambodian National Volleyball League.

Forging the Path - By leading the way in encouraging CSR in Cambodia, the CNVLD and Cambodia’s Athletes with a Disability are enjoying unprecedented support thanks to their outstanding sporting achievements.

Raising the Game – Cellcard Join the Sports Court The Cellcard 2009 Cambodian National Volleyball League represents a quantum leap forward for the development of disability sports in Cambodia and the mainstream integration of Cambodian Athletes with a Disability.

With 4 weekends of competition in the Olympic Stadium, 10 teams, 80 athletes, live to air CTN TV coverage and match round-ups and the highest ever prize money, the Cellcard 2009 Cambodian National Volleyball League promises to the most hotly contested ever.

The allure of the prestigious title of Cellcard 2009 Cambodian National Volleyball League Champions has training courts searing across the country as coaches prepare for the opening ceremony and matches on 24th July 2009.

The CNVLD and Cellcard’s hot new look for the League fires up with a national advertising campaign led by the Cambodian National Volleyball Team starring in a pioneering TV showing just why they are the best volleyball players in the nation. The campaign projects Cambodia’s Athletes with a Disability firmly into the mainstream conscious of the nation’s evolving popular culture and elevates them further as local sporting heroes. Staying ‘On the Move’ – ANZ Royal Bank Pioneer Long Term CSR Partnership The pioneering CSR partnership between the CNVLD and ANZ Royal Bank has led to significant mutual successes:

See the Action for Yourself! 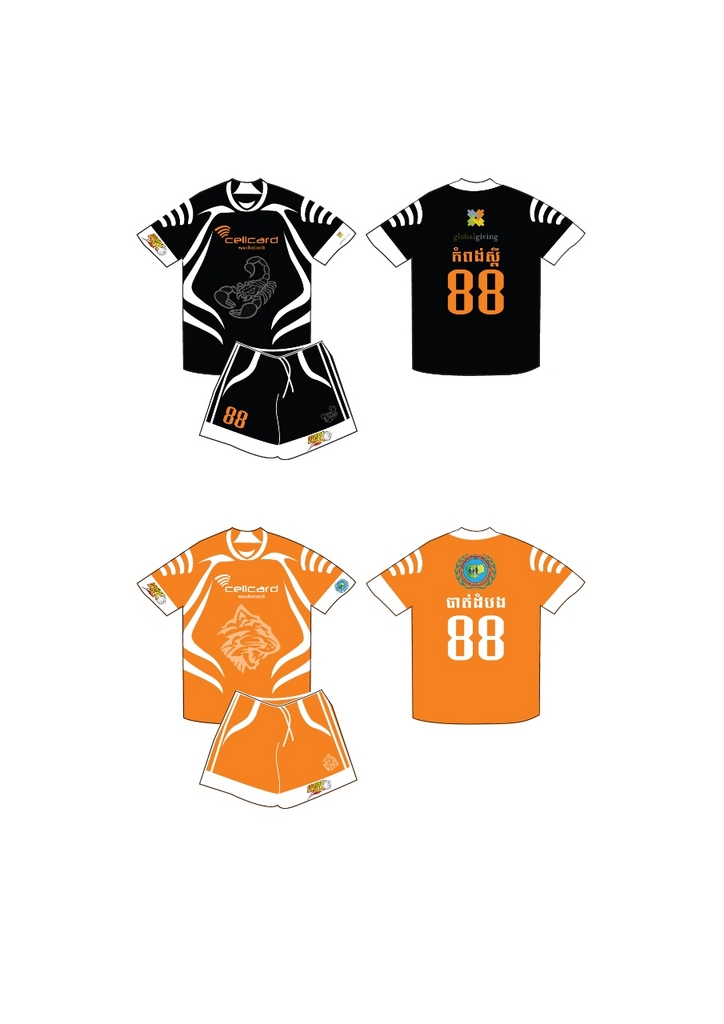 And even New Uniforms !

About the new CNVLD: 2009 and forwards

A PDF about the CNVLD - Enjoy !

Thank for your continued support and interest in Cambodia’s premier sporting Program – The CNVLD: “Cambodian athletes with a disability leading the nation’s sports development

We wanted to let you know that the CNVLD is participating in Global Giving’s Ready, Set, Give – Summer Sports Challenge, a fundraising opportunity for nonprofit organizations like ours who use sports to bring positive social change.

Every donation helps, and no donation is too small. You can make support to the CNVLD for as little as $10 and make an impact.

The CNVLD and Cambodian athletes with a disability are very excited about this opportunity on Global Giving.

Please share this with your friends and family and ask them to help too!

Christopher Minko; for and on behalf of the CNVLD athletes with a disability of Cambodia