CNVLD Sisters are doing it for themselves on YouTube

Watch Cambodian CNVLD sisters doing it for themselves on Youtube !

A film by Nacky Hagemeyer 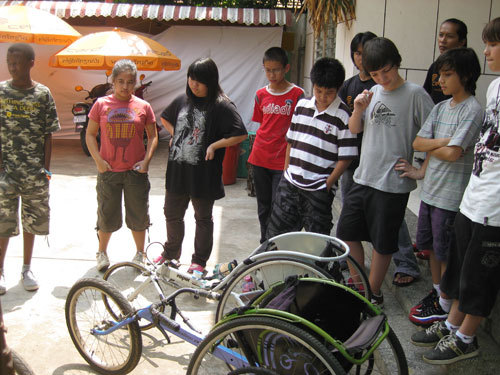 Now in its sixth successful year, the ISPP Landmine and Disability Study Group kicked off last week at the start of the new academic year when 10 students visited the CNVLD office for an introductory presentation.

Established by inspirational ISPP teacher Mr Brian Webster in 2003, the Landmine and Disability Study Group is the most important component of the CNVLD Education Programme and has seen remarkable progress in integrating disability issues into the school curriculum.

As proud co-sponsors of the Takeo ISPP Templestowe Falcons volleyball team, ISPP students organise a whole host of activities through the year to promote awareness of disability issues. The Annual ISPP Fun Run raises $5000 every year towards the Falcons team sponsorship which allows the Falcons to be one of the most competitive teams in the 2009 Cellcard National Volleyball League. The Annual ISPP CNVLD Volleyball Tournament has brought new levels of integration between youth athletes and the athletes with a disability of Cambodia and the Falcons also help the ISPP team prepare for their regional international schools annual MRISSA tournaments. In September, fellow Falcons co-sponsors Templestowe College Melbourne ‘Cambodia Community Challenge’ students will return for the 4th consecutive year to play in mixed team matches with the Falcons and ISPP students.

In recognition of ISPP’s efforts, the school was awarded the CNVLD Best Educational Institute for Disability Issues Annual Disability Award in 2008.

Since 2005, ISPP Landmine and Disability Group students have also worked on the renovations and upkeep of the grounds at the Kien Khleang National Rehabilitation Centre, created an award-winning Dutch language landmine website, designed an international fund-raising campaign, produced a short video documentary and, most importantly of all, contributed enormously to raising awareness, support and respect for the athletes with a disability of Cambodia.

During the visit to the CNVLD office last week, after an introduction by CNVLD Secretary General Chris Minko, the Landmine and Disabilty Study Group with teachers Mr Brian Webster and Ms Marion Harris, found out from CNVLD Volleyball Manager Mr Pich Piseth, CNVLD Admin Manager Ms. Keth Theary and CNVLD Special Projects Officer Neil Wilford about the huge progress the CNVLD has enjoyed since the end of the 2009 school year, including the all new 2009 Cellcard National Volleyball League, the nomination of National Wheelchair Racing Champion Van Vun to qualify for the London 2012 Games and the progress of the Armed Art programme under Melbourne Royal Institute of Technology lecturer and producer of the World Cup medals Mr George Friml.

The CNVLD is exceptionally proud of its cooperation with ISPP and looks forward to another successful year working in cooperation with the dedicated students and staff, together with the Athletes with a Disability of Cambodia.

CNVLD and ISPP: Standing Up to Encourage Awareness of Disability Issues and Volunteerism Among Students in Cambodia 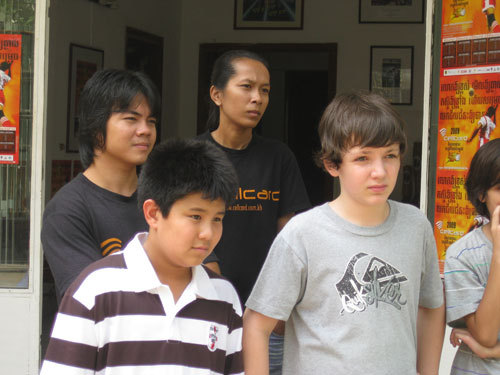 Cambodian National Volleyball Team Coach Christian Zepp has once again cemented his position as a true sporting hero and an inspiration to all by swimming an outstanding 66km in support of the Pailin Frechen Lions – the equivalent of swimming the English Channel twice!

The CNVLD were the first to catch up with Coach Zepp, who won the hearts of the nation after guiding the Cambodian National Team to World # 3 at the 2007 WOVD Cambodia Volleyball World Cup, straight after his mammoth effort

“It’s been a tough weekend, but it was great. I don’t think I have ever done anything similar before… Even the Ironman in 2003 was a walk in the park compared to this competition! After all, I did 66km.

Yesterday I was kind of devastated physically, but today I’m feeling a lot better. I knew what I was doing this for and it was worth it. Through the swim, I raised some 800 EUR. Additionally, the Mayor of Frechen has agreed to provide an increased prize again in support of the sponsorship for the Pailin Frechen Lions.

I also won a voucher for 600Eur from a local electronics store - the same store who donated the voucher last year. Prior to the swim we talked about how to deal with the situation if I won the swim again, because they knew that I would want to donate the money again. The owner said that given the current economic climate, he could not afford to give 600Eur in cash because the voucher is worth 600EUR for goods. However, we decided that he would donate 300 EUR in cash, and donate an additional 300EUR voucher to the youngest participant in the competition. This was a perfect compromise as I am also the Youth Director in my local sports association and am pleased to honour the effort of local young athletes and encourage their participation in such an sporting event.

In addition, the organizers of the event donated a specific amount for every km swum overall by all participants which they donated to a local charity. So from this athletic achievement by many people, many less fortunate than us will benefit greatly.

So from my swim, I raised 1100EUR for the Pailin Frechen Lions not including what the Mayor of Frechen will donate on top. I know how much difference this makes to the CNVLD and their work in providing sporting opportunities for the athletes with a disability of Cambodia.

One thing I have learned this weekend: If you think you can’t go on - you can even push a little more!”

DDD and the CNVLD are now in their second year of successful partnership: DDD staff work as volunteers at the 2009 Cellcard National Volleyball League and Miss Tol Kolab, a DDD staff member works part-time as a Financial Management Trainee through an internship funded and technically supported by ANZ Royal Bank. DDD were also winners of the inaugural CNVLD Best Employer of Persons with a Disability Annual Disability Award in 2008.

With just three years to go prior to the London 2012 Games, Van Vun, the ANZ Royal CNVLD Wheelie Grand Prix National Male Champion, is hard in training to become the first ever Cambodian to qualify for the Paralympics. An integral part of this process is allowing 23 year old Vun the opportunity to seek long-term training and employment in Phnom Penh in parallel with his athletic endeavours.

In an innovative expansion of their cooperation, DDD have donated a computer to the CNVLD to allow Tol Kolab to train Van Vun in basic computer skills. Similar to many persons with a disability in Cambodia, Vun did not finish high school because of the distance from his family’s home and his lack of mobility. Despite currently not meeting the entry standards to join a DDD Training Programme, DDD General Manager Kunthy Kann immediately recognised Vun’s potential and applying for the exam. If the training is successful, Vun would then have the opportunity to become employed with DDD.

DDD’s donation reflects the unique power of sport to provide individuals with a disability the dedication, commitment, loyalty, self-confidence and desire to be active, respected members of their communities, all of which are essential skills for the modern workplace.

The CNVLD wishes to thank DDD for their outstanding generosity and support for the athletes with a disability of Cambodia.

DDD and CNVLD: Standing Up Together to Provide Opportunities for the Persons with a Disability of Cambodia.

The Power of Volunteerism:DDD, ANZ Royal Stand Up

In a pioneering display of individual and corporate social responsibility, 60 staff from Digital Divide Data and ANZ Royal Bank have Stood Up as volunteers for the 2009 Cellcard National Volleyball League. Following the introduction of the CNVLD Volunteer Programme in 2008, when 50 DDD staff worked as volunteers for the National Volleyball League, there has been a groundswell of volunteers standing up in support for CNVLD sports programmes including the ANZ Royal CNVLD Wheelie Grand Prix. As part of the CNVLD’s dedicated drive to ensure the effective, sustainable development of a national disability sports infrastructure managed by Cambodians for Cambodian athletes with a disability, the push to encourage volunteerism amongst young Cambodians has yielded remarkable results. Since 2008, Digital Divide Data (DDD), Winners of the CNVLD 2008 Best Employer for Persons with a Disability Award and ANZ Royal Bank, Winners of the CNVLD 2008 Best Corporate Supporter Disability Issues Award, have encouraged their staff to participate in essential volunteer staff positions. DDD staff with a disability in particular are especially proactive and enthusiastic to contribute their time and effort in support of their nations sporting heroes. The 2009 Cellcard National Volleyball League is entirely staffed by volunteers manning positions as diverse as staff coordinators, commentators, line judges, score keepers, court cleaners, water monitors, ball boys/girls and trouble shooters. The CNVLD’s Volleyball League Manager, Mr Pich Piseth is also exceptionally proud to work entirely on a voluntary basis. DDD in particular have reaped the professional rewards of encouraging volunteerism. In 2008, Mr Bun Sokha was the security guard for DDD with no experience of volunteerism, sports management or computer work. One of the first to sign up as a volunteer in 2008, Sokha quickly established himself as the Chief Commentator and worked to coordinate the roles of other volunteers. With a new found confidence and sense of responsibility, DDD reciprocated with formal training and Sokha is now a valuable Operator in DDD’s data entry team. In 2009, Sokha is once again at the helm of the microphone for the 2009 Cellcard National Volleyball League. The management of both companies also benefit from the engagement in volunteer programmes as it assists in the identification of staff whose commitment and dedication stretch beyond what is immediately required, with obvious long term institutional and economic benefits. Since 2008, ANZ Royal Bank staff have also been responsible for ensuring the smooth implementation of the ANZ Royal CNVLD Wheelie Grand Prix as staff coordinators, commentators, official timers, race starters, water monitors and trouble shooters at the Phnom Penh and provincial rounds of annual competition. Across the world, the bedrock of successful national and international sports infrastructures, including the Olympic Games, is the dedication and commitment of volunteer staff and the CNVLD is proud to be harnessing the unique power of sport to encourage young Cambodians to contribute to their nation’s disability sports development. The establishment of a dedicated, professional, experienced volunteer base also ensures that Cambodia is always ready to host international events such as the WOVD Standing Volleyball World Cup. The social and economic benefits for the individual and the nation at large are easy to quantify. It is estimated that approximately one-fifth of Australia’s and Germany’s GDP is generated through the efforts of volunteerism. With a dedicated crew of volunteers, many of them PWDs, behind them, the athletes with a disability of Cambodia have a new-found confidence and enthusiasm and this is reflected in a radically improved standard in their respective sports. Volunteerism is also a key component in encouraging social and individual responsibility in Cambodia, encouraging morality, team work, commitment, compassion and practically realising the Buddhist and universal tenets of selflessly assisting those less fortunate. The CNVLD acknowledges the tireless efforts of the DDD and ANZ Royal Bank volunteers and thanks them for their contribution to the development of a sustainable Cambodian National Disability Sports Infrastructure. The CNVLD Volunteer Programme – Standing Up to Encourage Individual and Corporate Responsibility in Support of the Athletes with a Disability of Cambodia.