Dear colleagues and friends of the CNVLD The CNVLD, one of Cambodia’s most unique NGO’s with a hard-line policy of international standard financial transparency along with ensuring that 80 % of total income is allocated as direct support to Cambodian athletes with a disability and the landmine survivors of Cambodia, is very proud to announce the launch of a new website showcasing the internationally recognized sports and development programs of the CNVLD. www.tobedeter-mined.org This website is devoted to the upcoming international tour of the CNVLD Exhibition “ To Be Deter-Mined” and showcases the work and achievements of the CNVLD’ sport and development programs through a series of photo essays from some of the world's best photographers including Luke Duggleby, Tim Page and John Vink from Magnum along with images of sculptures from the Exhibition which are manufactured from destroyed weapons Please enjoy www.tobedeter-mined.org The CNVLD: the only Cambodian NGO to receive a UN Best Practices Award – celebrating our 10th year in 2010

Coach Sieng Sokchan aims to continue her teams’ domination of the Women category in 2010 after Krouen Vannon blasted to consecutive victories in 2009 with Tor Chanta close behind. Former Champion Yob Nom who took maternity leave in 2009 hopes to make a comeback later in 2010.

Coach Ek Leng will be missing his star female athlete and 2008 Champion Loet Ngait for the early part of 2010 as she takes maternity leave. The CNVLD wishes her the best of health for her new-born!

Coach Pov Sophal, increasingly acknowledged as the most successful coach in Cambodian wheelchair racing history, will be pushing his top athletes Eng Laihourn and Yim Sophal even harder this year to challenge his former protégés Van Vun and Soeun Vanna who have dominated the podium positions since 2008. With a crack 5-man team and a strict training regime expect the KK Racing Team to feature in the top times in 2010.

Coach Cheom Sophanna, once the youngest coach in CNVLD history, is now regarded as a seasoned veteran and continues to impress with consistent finishes. Sophanna is determined to break the stranglehold of the Phnom Penh based male athletes to become the first provincial male podium finisher during the 2010 season. 2007 Female Champion Um Sophat made her return after maternity leave in 2008 in the last race of the year in 2009 and is expected to mount a spirited challenge in 2010 against the domination of the Battambang team in the women’s category.

With two months hard training ahead before the 1st Round competition in Phnom Penh, 2010 will also see the continuation and expansion of the CNVLD Volunteer programme with the ANZ Royal Wheelie Grand Prix being managed and staffed entirely by Cambodians in line with the CNVLD’s objective of complete localisation by 2015.

ANZ Royal Bank staff continue to stand up as leaders in local corporate social responsibility by volunteering in great numbers to ensure the event is remains at the cutting edge of Cambodian sports event management.

From London to Geelong

By Liz Gooch - From Cambodia to Geelong, with London 2012

FOR much of his young life, Van Vun's view of the world has been obscured by people's kneecaps.

A bout of polio when he was 18 months old left him unable to use his legs, so he relied on his arms to heave himself across the fields where his parents grew rice and vegetables near the Cambodian capital of Phnom Penh.

Now 23, Van Vun's carved biceps are propelling him far beyond his family's fields, and he has a clear vision of the future that awaits him.

Ranked No. 1 in Cambodia across all distances in wheelchair racing and with his sights set on the London 2012 Paralympic Games, Van Vun will arrive in Geelong on Friday for an eight-day training camp organised by Parallel Sports, a volunteer group affiliated with Athletics Victoria.

Van Vun , who is making his first trip overseas, will return home with a new wheelchair donated by Parallel Sports.

''I hope I can learn a lot in Australia and show that Cambodian athletes can compete with international athletes with pride,'' he said.

Van Vun, who only began attending school when he got his first wheelchair at the age of 15, is an example of how sport is helping change lives in a country that has one of the world's highest concentrations of disabled people.

In 2006, when he was studying electrical repairs at a rehabilitation centre in Phnom Penh, Van Vun heard about the wheelchair racing program organised by the Cambodian National Volleyball League (Disabled) and signed up immediately.

Before he started competing, Van Vun said, no one wanted to talk to him. ''People looked down on me,'' he said.

Now a national hero, police stop traffic for him when he is training on the streets of Phnom Penh. He says he feels as though people treat him like a ''normal person''.

Chris Minko, an Australian from Myrtleford, is secretary-general of the Cambodian National Volleyball League (Disabled), and was recently honoured for his services to Cambodians with disabilities with an award from the country's Prime Minister, Hun Sen.

He said Van Vun was an example of how sport could help Cambodia's most marginalised citizens regain their self-esteem and physical wellbeing to become active members of the community.

Kaye Colman, vice-president of Parallel Sports, said Van Vun would train alongside some of Victoria's best wheelchair athletes and several Japanese athletes at the camp, taking part in three training sessions a day - on the track, in the gym and the pool.

She said the group decided to give Van Vun a new wheelchair to help him in his bid to qualify for the London Paralympics. 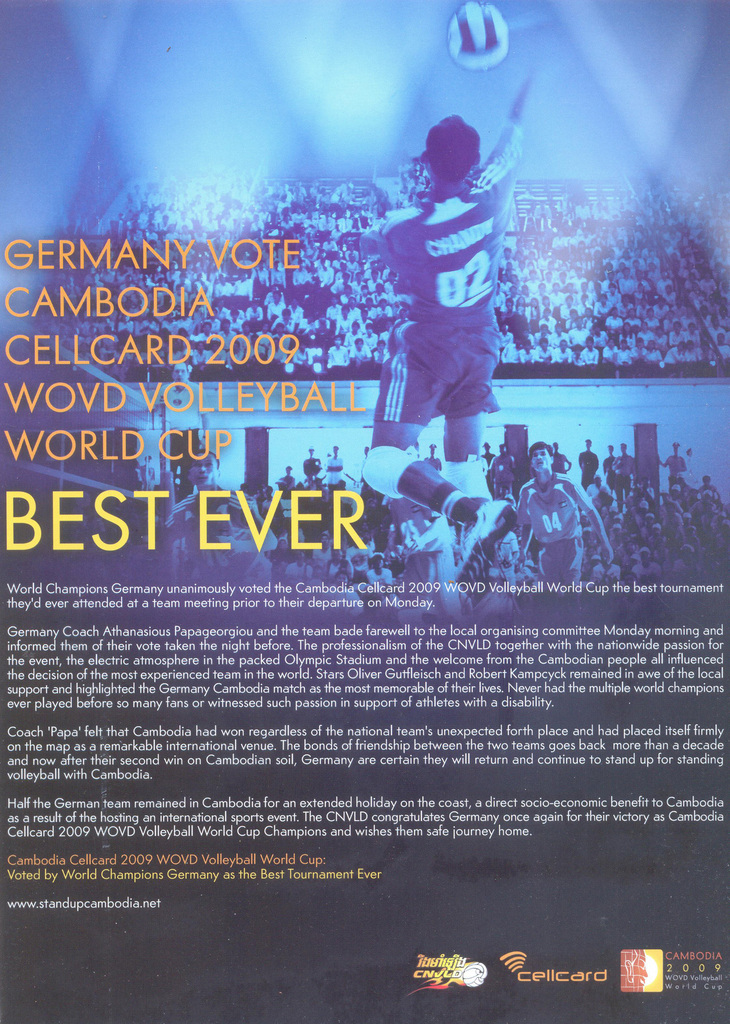 Germany Coach Athanasious Papageorgiou and the team bade farewell to the local organising committee Monday morning and informed them of their vote taken the night before. The professionalism of the CNVLD together with the nationwide passion for the event, the electric atmosphere in the packed Olympic Stadium and the welcome from the Cambodian people all influenced the decision of the most experienced team in the world. Stars Oliver Gutfleisch and Robert Kampcyck remained in awe of the local support and highlighted the Germany Cambodia match as the most memorable of their lives. Never had the multiple world champions ever played before so many fans or witnessed such passion in support of athletes with a disability.

Coach 'Papa' felt that Cambodia had won regardless of the national team's unexpected forth place and had placed itself firmly on the map as a remarkable international venue. The bonds of friendship between the two teams goes back more than a decade and now after their second win on Cambodian soil, Germany are certain they will return and continue to stand up for standing volleyball with Cambodia.

Half the German team remained in Cambodia for an extended holiday on the coast, a direct socio-economic benefit to Cambodia as a result of the hosting an international sports event. The CNVLD congratulatesGermany once again for their victory as Cambodia Cellcard 2009 WOVD Volleyball World Cup Champions and wishes them safe journey home.

Voted by World Champions Germany as the Best Tournament Ever