Biodiversity Restoration Along the Tsurumi River

Oghi community is in full bloom at Tsunashima 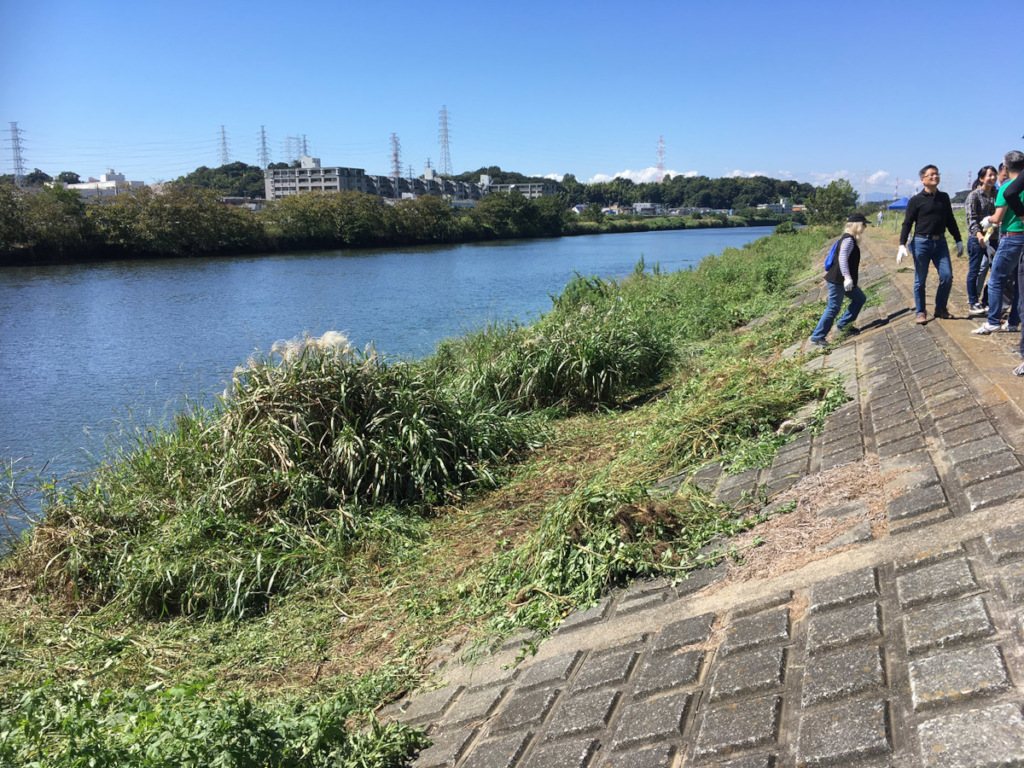 After the harshly hot summer days from mid-July to late August, we experienced two large typhoons here in this part of Japan.

First was strongly windy one in September. Second one, in December, was a historically large and strong typhoon with an unprecedented heavy rain causing nearly one hundred casualties over the central and northern part of Japan.

Thisincident , also with our effort to remove large amount of flood trash covering the field after the flood, markedly enhanced the autumn growth of  Oghi, the target species to be restored in this place.

Now our Oghi community is in full autumn bloom for a distance ofca. 50m that has been and is going to be under our intensive work of restoration. The autumn riverside scene beautifully fringed by silver ears of Oghi is attracting citizens, as also expected, spending recreational time at this riverside area.

The current state of restoration of the Oghi community is roughly assessed as some about 70% in area. In fact, the well restored Oghi, also still rather slender, constitutes a continuous community over the distance of 50m riverside area under recovery work.

This is a remarkable attainment far better than expected last year. During the winter, Oghi plants will vigorously extend underground root system and in the next spring we can expect new shoots coming out all over the vacant space for their space, causing the width of the community significantly wider than now.

We hope we will see a fully restored Oghi community, in its length and also in width, covering the current riverside restoration area of ca. 1/4 ha.

From the next spring we will extend restoration area upward for a distance of another 50m.

We hope we could get continued support from all of you. Thank you. 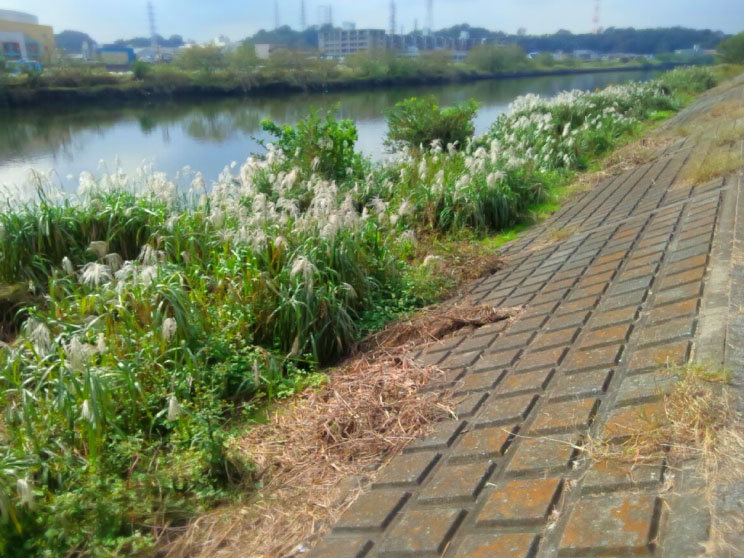 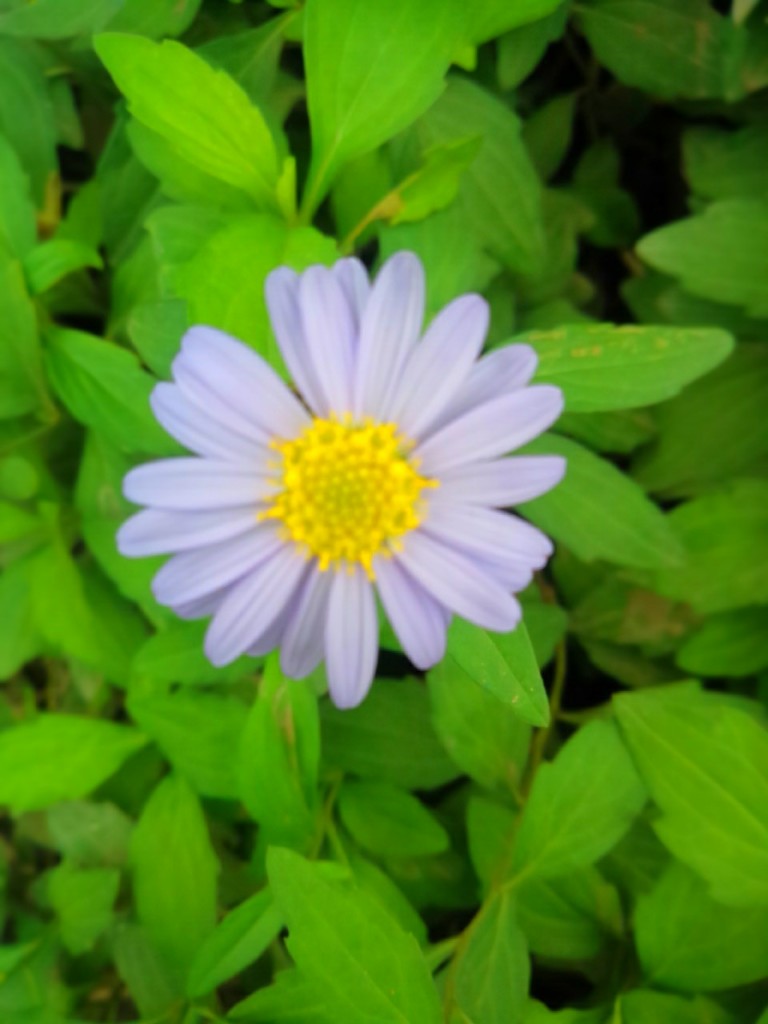 a wild chrysanthemum among oghi 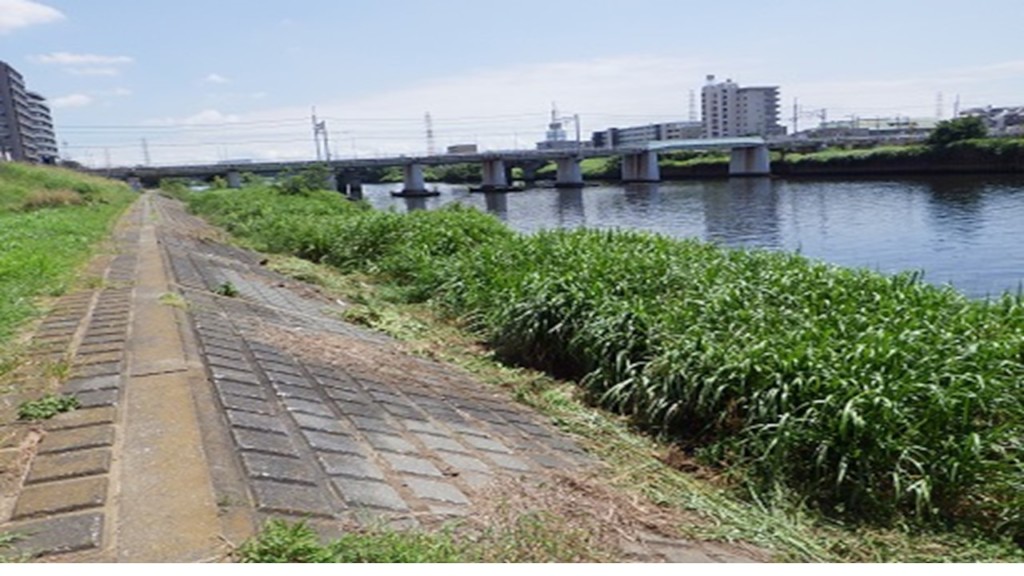 Since the time of our previous report, our field , the lower segment of the Tsurumi-river Tsunashima Riverside Green Belt in Yokohama Japan, has experienced long rainy days from June to mid-July and harshly hot summer days from mid-July to late August.

During the monsoon rainy days Oghi plant , the target species to be restored in our program, has produced new shoots lavishly in our field attaining a doubly large area of its coverage (ca, 70% of the field) than that of last summer, an unexpectedly good result.

Our efforts during the rainy season have concentrated to cut off the remaining rye rat grass (pollen allergy causing grass) flowering and withering in early July and, afterwards, during the harsh dry summer days, to pull off encroaching climbing species ,burr cucumber (Sicyos anguratus) , both from North America.

Result of our work during those three months is remarkable in that the area of Oghi community at the time of this report has been kept almost the same during the harsh dry summer days.

September is the month of autumn rainy days here in this part of Japan. We will continue work to pull off encroaching climbing species, foreign or native, to support the maturing process of our Ohgi plants.

Fine days of coming October and December will see a wide row of flowering silver ears of Oghi plants all along our river side field. We hope that one more year of intensive effort will make our Oghi plant the dominant vegetation again in this part of the river-side green zone.

In this year we successfully began to divert a part of our effort to make a nursery bed for a native herb Heracleum sphondylium, a species famous as a plant that rear caterpillars of a large beautiful butterfly Papilio Machaon (old world swallowtail ) in our field. We also started additional effort to rear a native day lily, Hemerocallis vulva, as another measure to replace the rye rat grass.

See you in late December 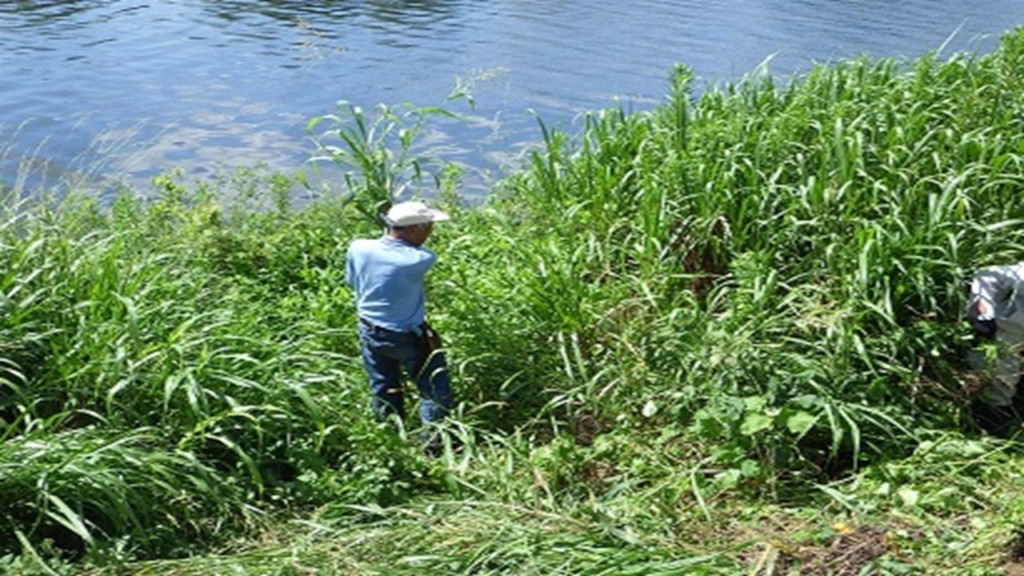 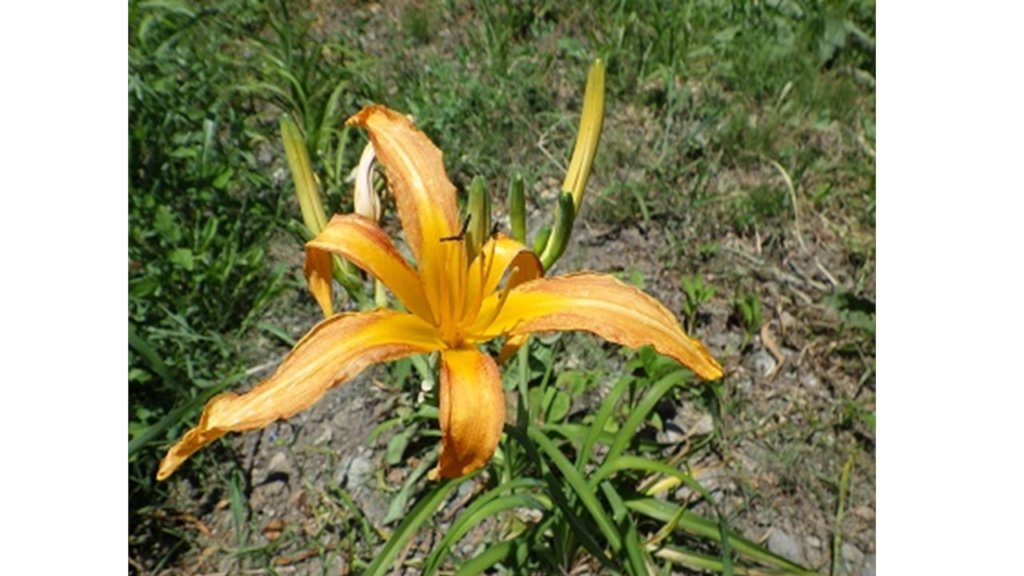 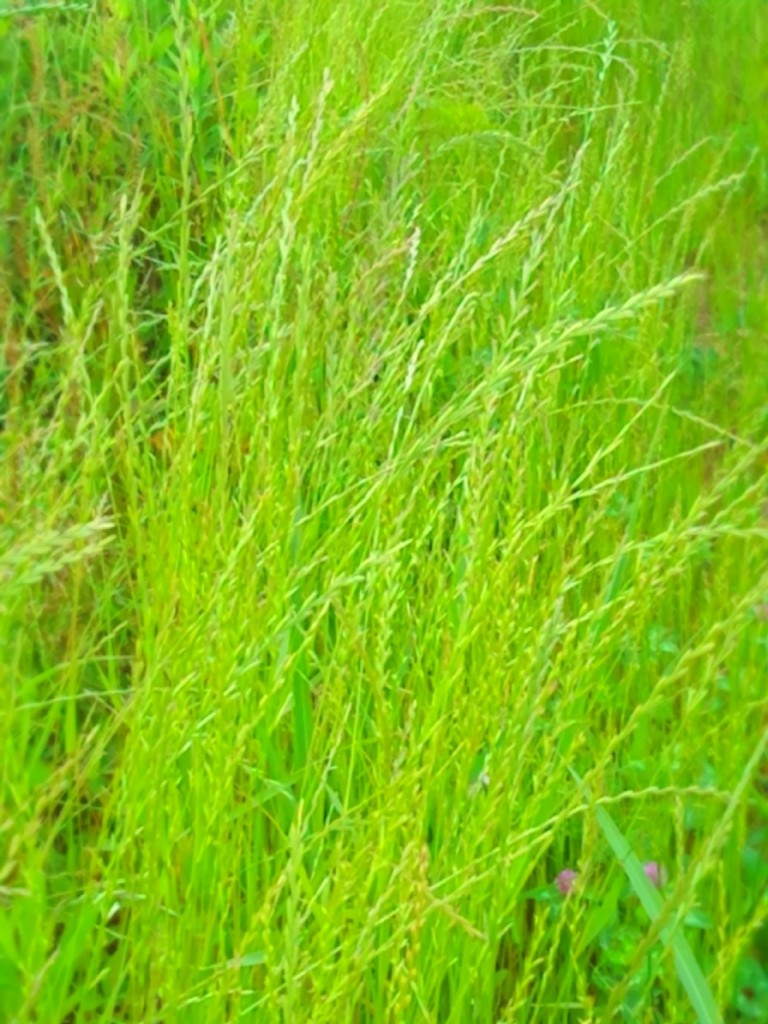 Spring has gone and monsoon rainy days will come shortly to our field, the lower segment of the Tsurumi-river Tsunashima Riverside Green Belt in Yokohama Japan. In this area , we have been working to restore the native Japanese river-side vegetation , Oghi grass community, that has been suppressed by the two kinds of foreign invasive plants(target species to be controlled) , burr cucumber (Sicyos anguratus) and rye rat grass, both from North America.

This is the 3rd summer of our effort of restoration in this area that had begun in 2016 by planting dozens of small patches of Oghi in the area then largely covered by rye rat grass from autumn to early summer and in turn by burr cucumber from summer to late autumn. Our effort have been the routine work to help the oghi plants spread new shoots by pulling out rat rye grass and burr cucumber. As a result Oghi patches have already spread well over the one third of the area just as expected and perhaps one or two more years of intensive effort will bring the expected situation in that the Ohi becomes the dominant vegetation again in this part of the river-side green zone.

This time of the year is just the critical period when the winter friendly grass , rat rye grass , matures and withers spreading large amount of allergy causing pollens into the surrounding air, and in turn the aggressive climbing plant burr cucumber sprouts from their seed bank. So our work in those days is rather passive but diligent one ie, only finding and pulling out burr cucumber seedlings with careful eyes. Near coming rainy season will powerfully support the growing Ogi shoots and this autumn will see our field be covered over 50% by Oghi vegetation.

We told in the previous about our effort preparing nursery bed for a native herb Heracleum sphondylium, a species famous as a plant that rear caterpillars of a large beautiful butterfly Papilio Machaon (old world swallowtail ) in our field. We report here that they bloom successfully in this late spring and their leaves also reared dozens of the beautiful native Papillio.

See you in late September. 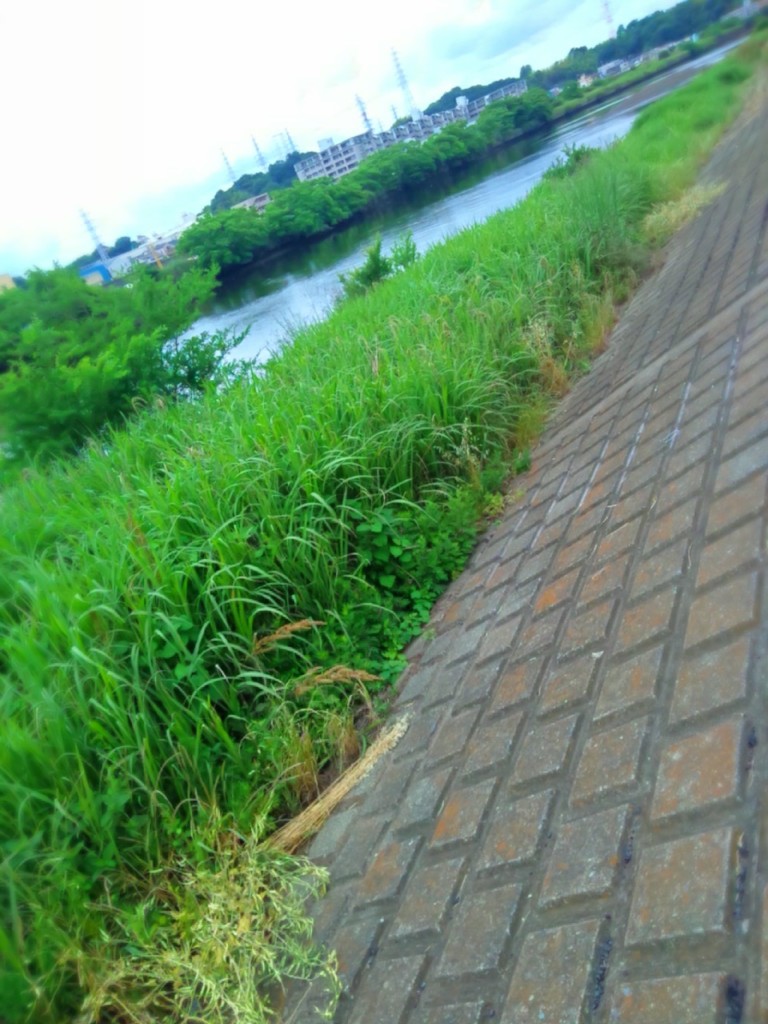 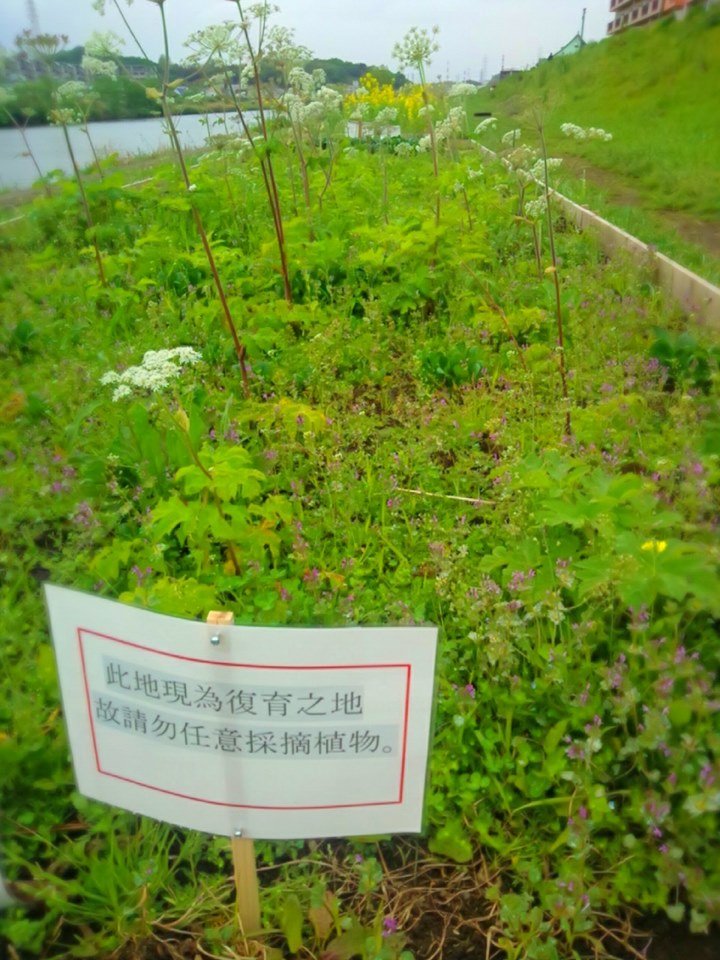 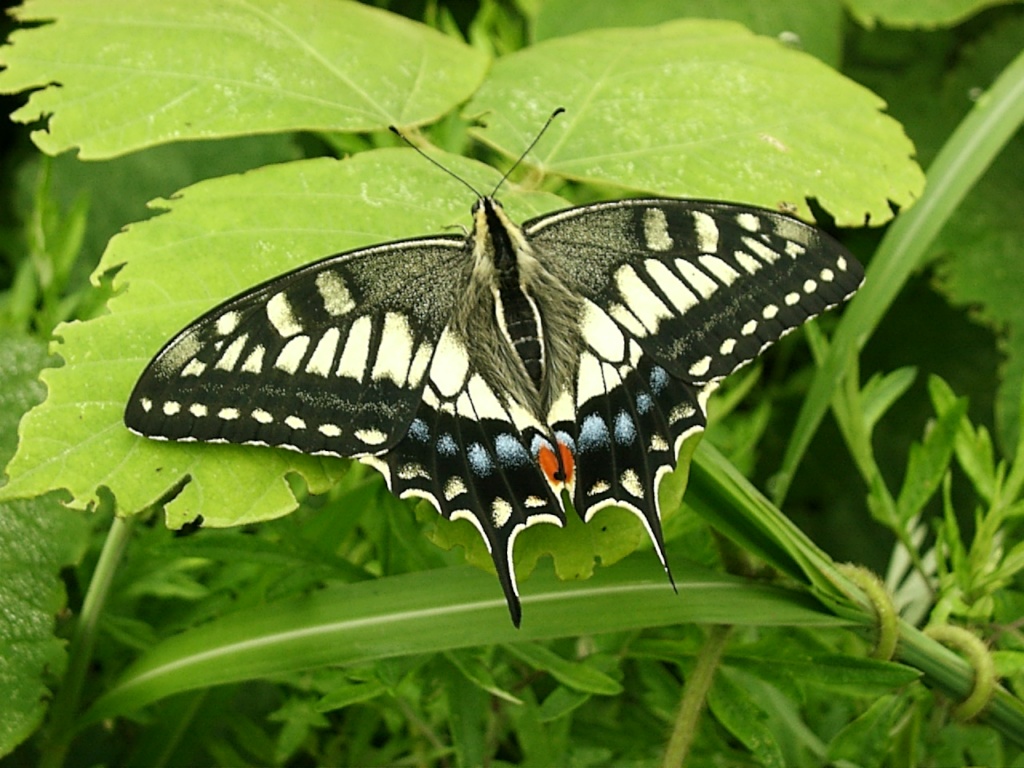 2019 Spring has just come to our field

By Yuji Kishi - president of NPOTRnet 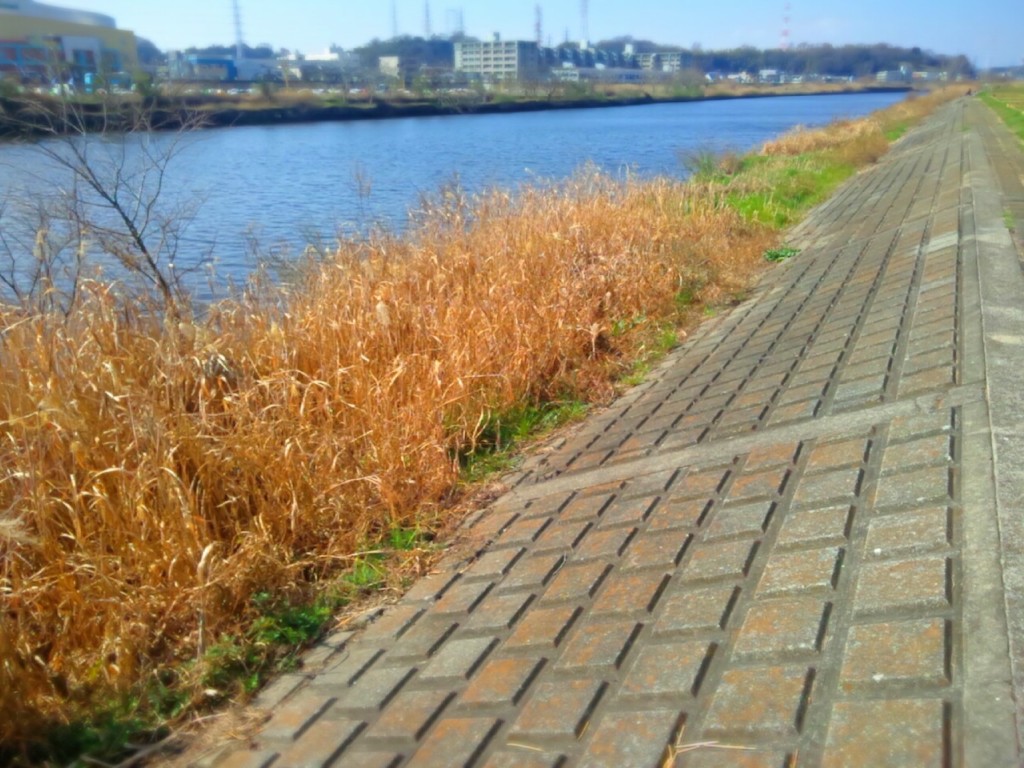 Spring has just come to our fieldthe lower segment of the Tsurumi-river Tsunashima Riverside Green Belt in Yokohama Japan, where the Oghi grass ,the target native plant species to be restored in this area during these several years, is going to wake up from their hibernation in several weeks.

During the winter we have been tending the Ogi by removing the winter growing foreign grass ,the rat rye grass, that may extract nutrient from the soil that should support the awaking Oghi grass in coming April, and also cause severe pollen allergy among nearby people in May and June.

Also we have been preparing nursery bed for a native herb Heracleum sphondylium.

This plant species is famous as a plant that rear caterpillars of a large beautiful butterfly Papilio Machaon (old world swallowtail )and so we plan to replant them in this late spring among the Oghi community under restoration , with a hope to make up a mixed plant community of Oghi and Heracleum sphondylium.

We hope that we can show you photos of the lovely river-side scene whith lavishly growing Oghi shoots and (though , perhaps, still small in numbers) flowering Heracleum sphondylium bearing many caterpillars of swallowtail on their green leaves.

See you in May. 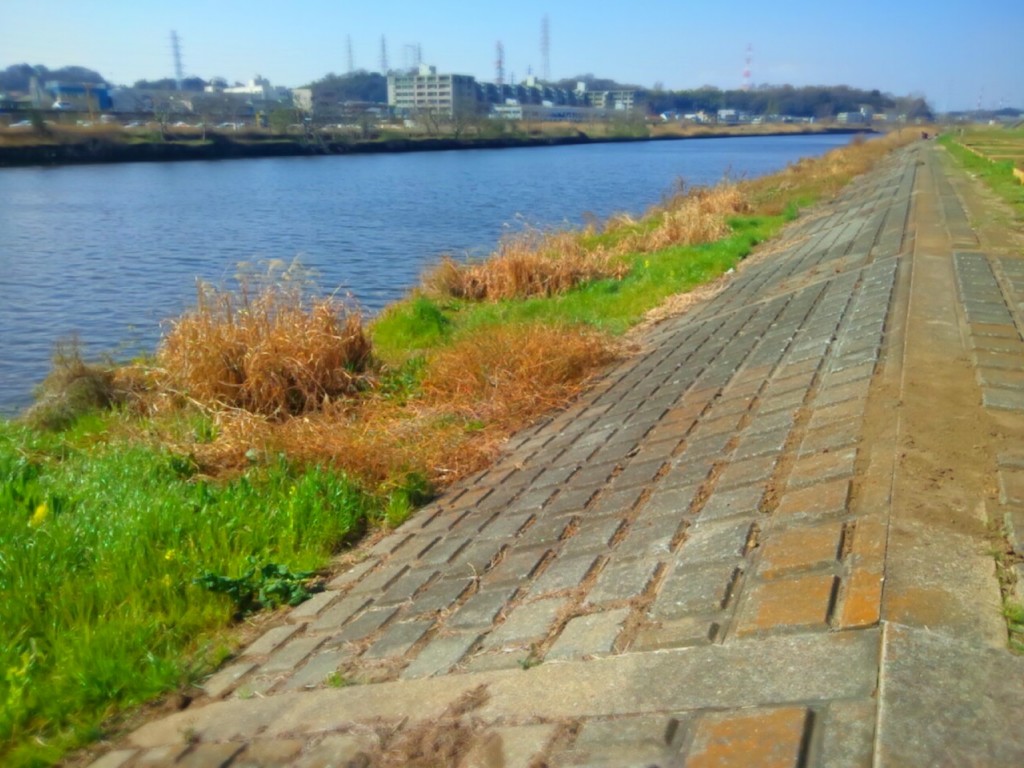 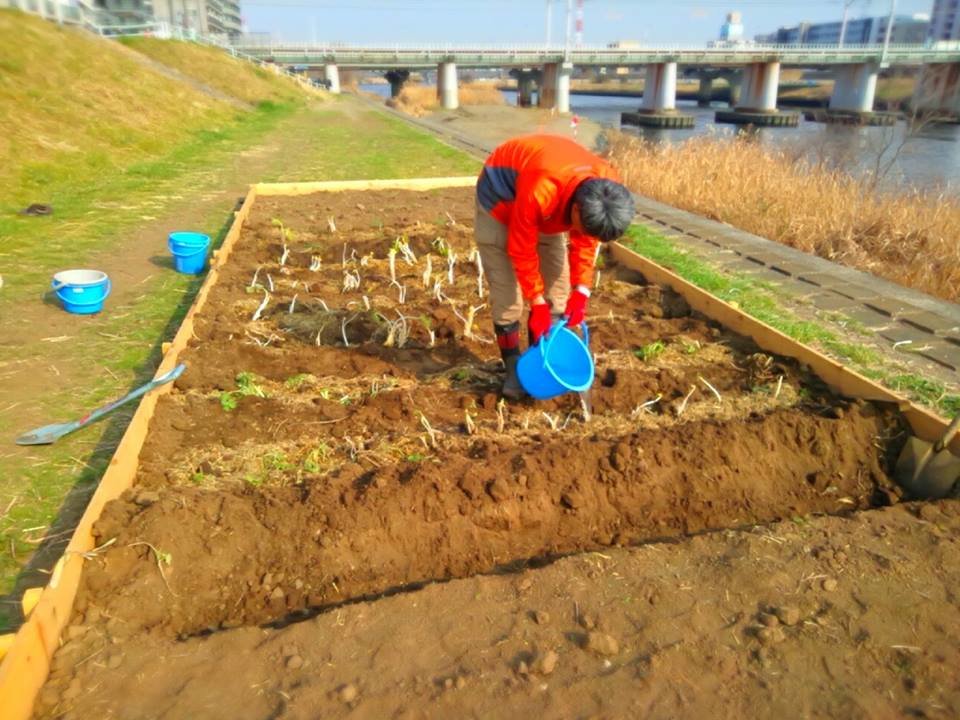 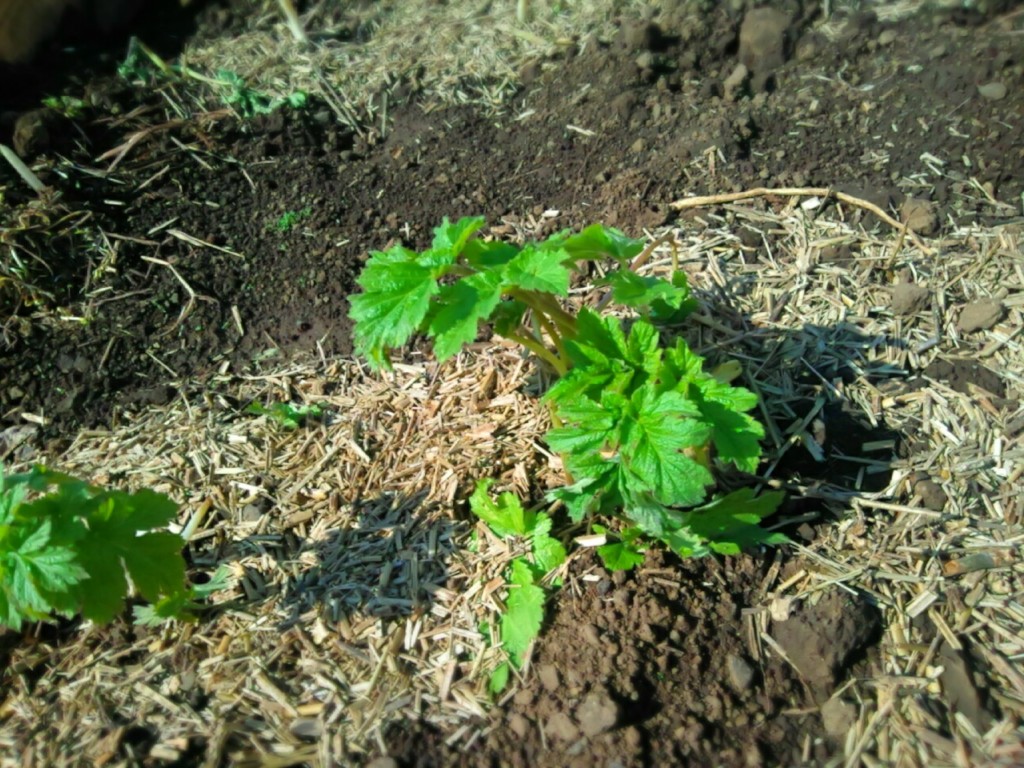 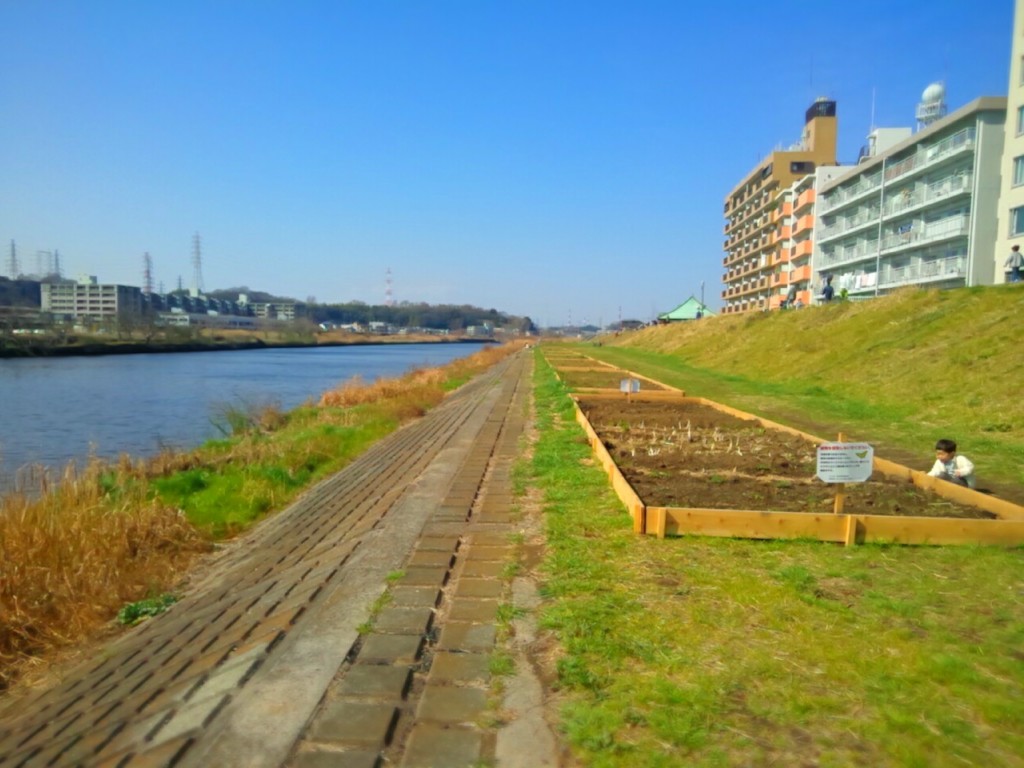 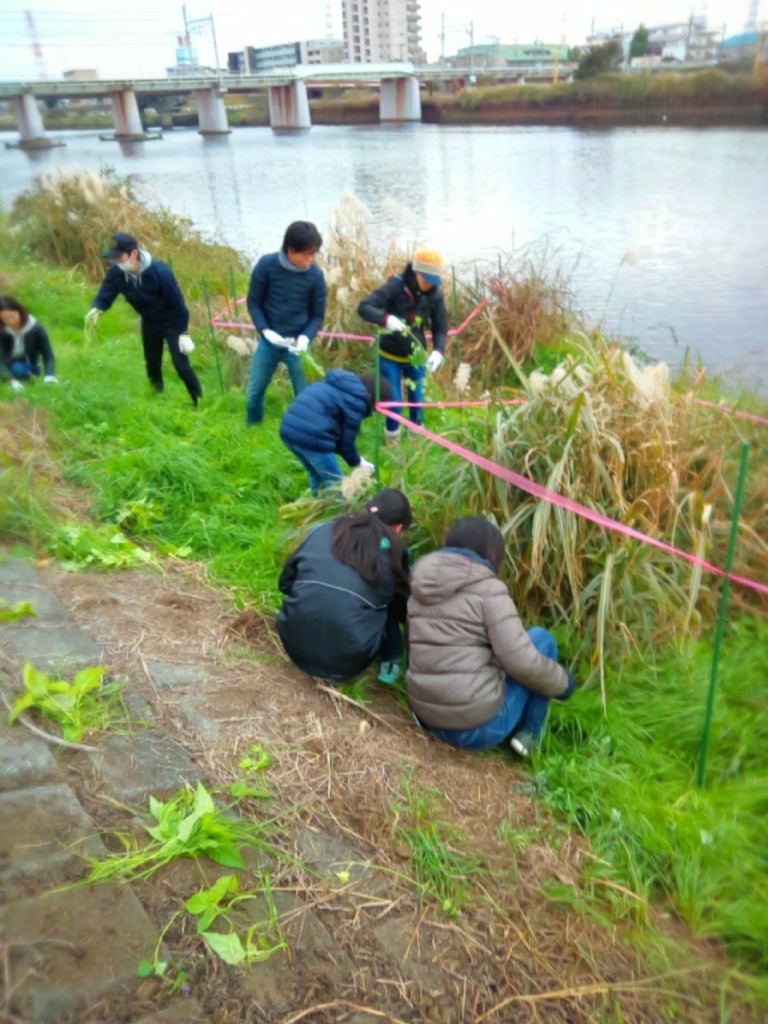 Oghi plants restoration activity at the lower segment of the Tsurumi-river Tsunashima Riverside Green Belt is entering second winter season. We are working busy to prepare good condition for growing 1young Oghi community that is just entering hibernation by pulling off invading major winter grass and herbs that may extract ,during the winter, significant amount of nutrients from the soil that may support spring shoots of the Oghi plants.

This time volunteer members from nearby company joined us on 24th Dec. We introduce them basic restoration ecology of Oghi plant with reference to invading foreign plants like bur cucumber and rat rye grass. Winter is just the season for rat rye grass that sprouts in deep autumn, grows very tall during winter , then put ears and completely wither in May and June next year, leaving the surface of the soil bare just suitable for the vicious foreign climbing plant bur cucumber to sprout all over the area having been densely covered by rye grass. So we can prepare a better spring condition for Oghi plant to sprout by thinning rye grass and other competitive plants at this time. Our staff and volunteer members did a good amount of thinning work half a day.

With our best efforts to restore Oghi community , assisted by varioussupporters like in these days, we expect that restoration level in the lower TRGB may also attain the level of today’s upper TGBR in 3 or 4 years. 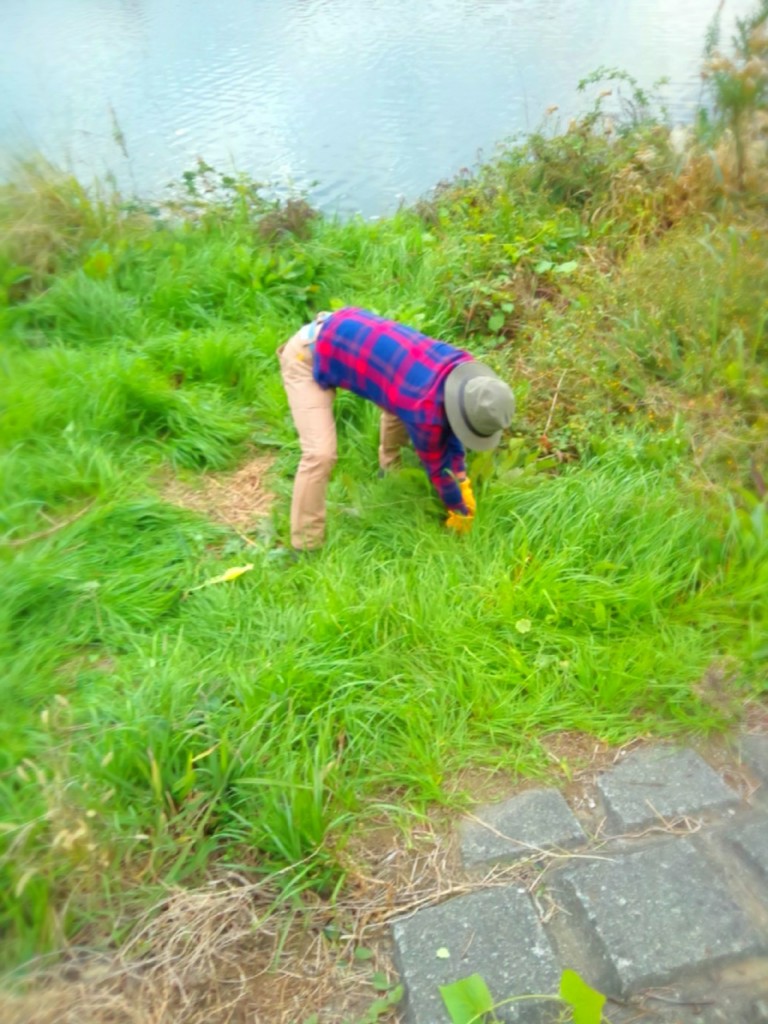 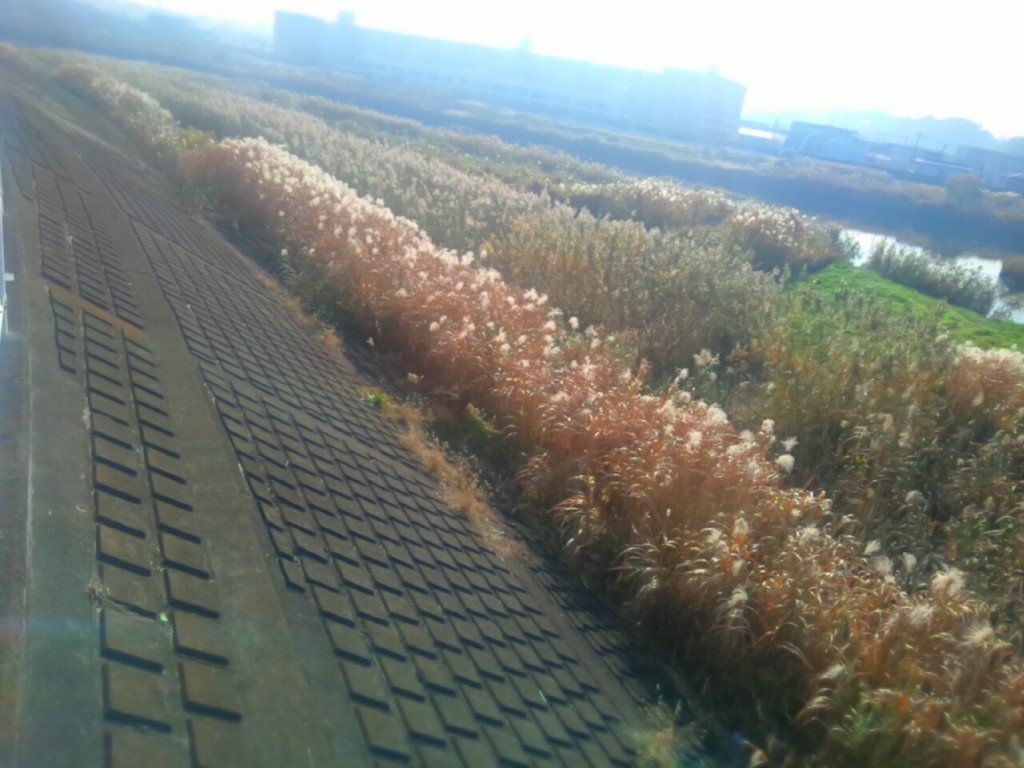 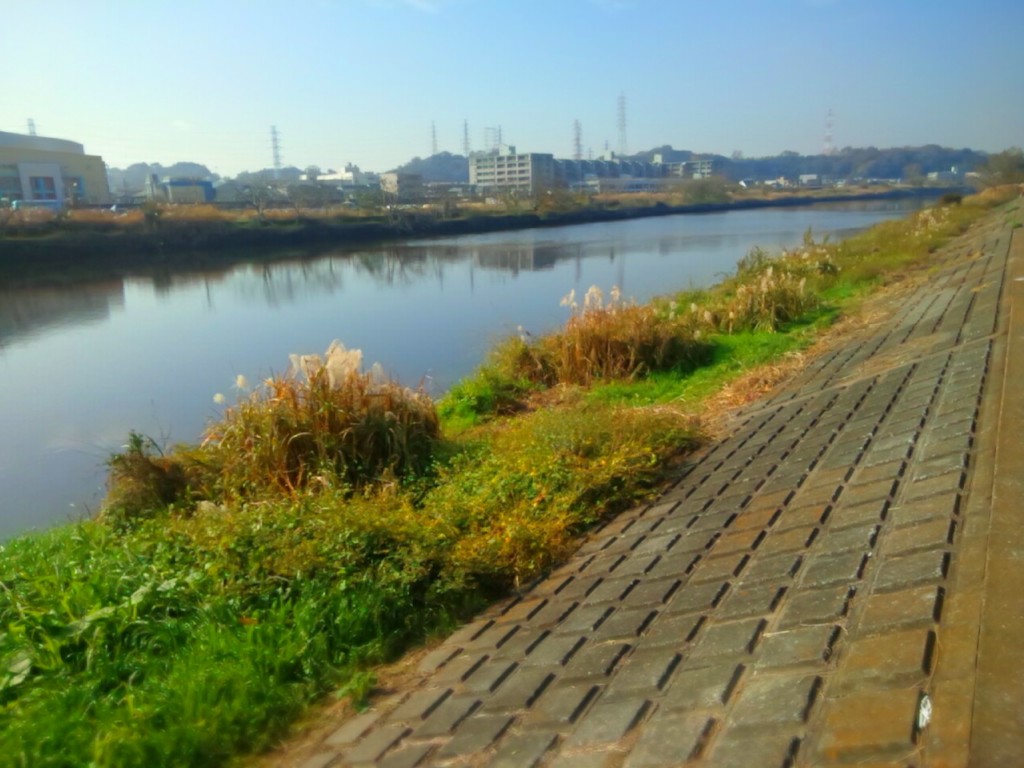 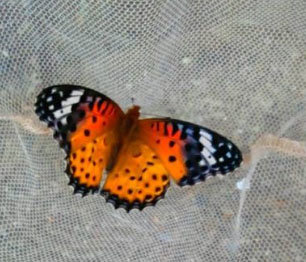 do you also hibernate? GlobalGiving
Guarantee
Donate https://www.globalgiving.org/dy/cart/view/gg.html?cmd=addItem&projid=25860&rf=microdata&frequency=ONCE&amount=25
Please Note
WARNING: Javascript is currently disabled or is not available in your browser. GlobalGiving makes extensive use of Javascript and will not function properly with Javascript disabled. Please enable Javascript and refresh this page.