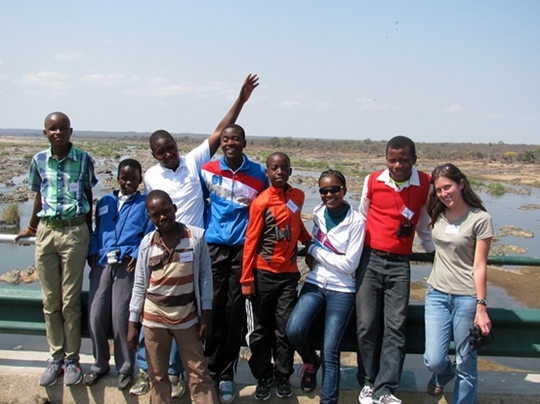 The children at Kruger National Park

My name is Andreas; I am filling in as an office volunteer and am happy to update you on everything that has been going on at Daktari. First of all I would like to thank every one of you for your donations and support! It is thanks to you that Daktari can keep helping under-privileged children and orphaned animals. It is thanks to YOU that we can make a difference in this world!!!!

We have quite a few new animal updates ready for you.
The first one would be the release of Gerri Junior, the spotted eagle owl we told you about in the last newsletter. He has been released at Askari, a big game reserve close to us.
Unfortunately our caracal May has passed away. Zulu, who had broken into her enclosure in the night attacked her. It was an extremely sad day for Dakatari and we decided that Zulu was getting too dangerous. He is now being rehabilitated in Makalali, our neighbouring game reserve, where he will then be released.
The pied crow Presley had medical complications, which she unfortunately died from two weeks ago. Let’s hope Elvis recovers from the loss of his best friend quickly.

On a happier note, we rescued a baby Duiker. Duikers are part of the antelope family and this one was found in the middle of the street. After an extensive search for her parents, the people who found her called Daktari. She’s been named “Easy” and she is doing quite well! She loves playing with the little dogs and drinks her milk very nicely.
We also rescued an African Hawk Eagle called Scotty. She flew into a power line and is still recovering from the severe injuries to her left wing. She will most likely never fly again but there is still hope!!! She is starting to hop around more and uses her wings to balance, which is a great sign!!

The children, as always, have been great in the last few months!! We even did another Kruger trip with the winners of the marula trees. They had a great time and were SO excited with seeing and learning all about the wild animals in the reserve. The smiles on their faces when we dropped them back off into the village is exactly why we put all this love and effort in Daktari!! 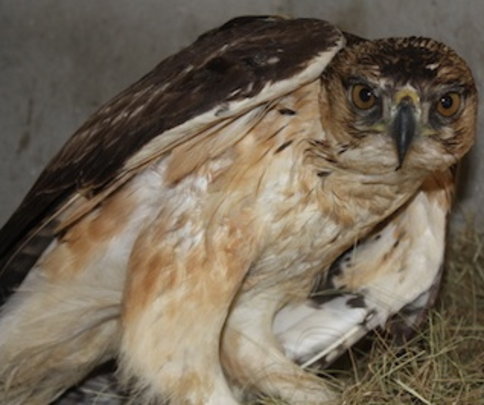 A little help from our friends! 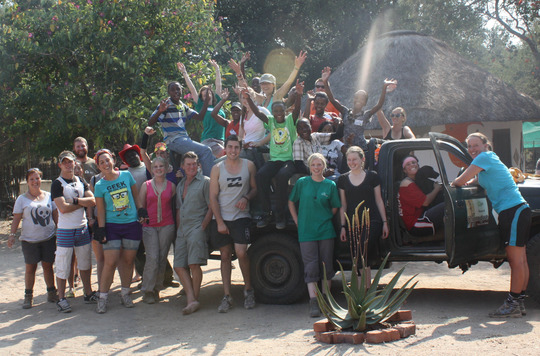 Gast speakers Kate and Andrea at the club

I would like to thank everyone that has donated so far and for following our project. Without your support we would be unable to help all these students like we do. We were able to register at with WESSA/WWF for the schools, more information will follow in the next reports. Thank you for that, it's a great step into the future of the project and into the education of these kids.

We have had a busy past few months with guest speakers at the club, lessons planned by volunteers, charitable events from other organizations and much, much more. All of the guest speakers and events has given our students confidence in themselves and hopefully will inspire them to work towards a better future.

In previous reports we mentioned Kutullo and that he got his dream placement at Khamai Reptile Park. Well he is still there volunteering and has been there nearly two months now and is still really enjoying it. Every week he phones and tells me all the amazing things he has been able to do, from holding dangerous snakes to going out on calls to remove and release animals from peoples homes. Unfortunately Khamai will not be able to employ him as full time staff due to already having a full team, but the experience and his willingness to learn will give him a better chance of getting employed in the future.

In the future we are planning to try and place as many students as we can in higher education and work placements. Usually interviews, accommodation and travel costs are a factor in where we can send the students. Hopefully with you’re continued support we shall be able to place all the students in areas they are interested in.

In May Global Vision International (GVI) held an event to raise funds for the Daktari Outreach Programme. Staff and volunteers from GVI pushed a Toyota Hilux from a gate on Karongwe Game Reserve all the way to Daktari. They delivered materials and stationary to us and raised money through sponsorship and donations. This huge feat included; 11km of dirt road with 5 hills and to the surprise of everyone at Daktari this was managed in less than 5 hours (some of our volunteers thought it would take over 9). Over £2000 and a huge amount of materials was given to us and every member of the Eco Club was ecstatic that so many people cared about them and there future. All the students and everyone that helps with the Outreach Programme would like to say thank you again and we hope that more organizations will hold similar events in the future.

The last story I want to tell you about happened a few weeks ago. Willington the president of an Eco Club we are not yet involved with contacted me 2 weeks ago. He heard two boys talking about a cattle egret they had found, which was attacked by a dog. The discussion was about taking the egret to a Sangoma (traditional healer) and selling it. This is where Willington stepped in and told the boys to give him it, and this is where he called me. We went to get the egret from the local village and brought it to Daktari where we cared and fed it. Unfortunately the injuries he received were too severe and died soon after. This is a fantastic story of the impact we have made to the community and we hope in the future this will be a more frequent occurrence. 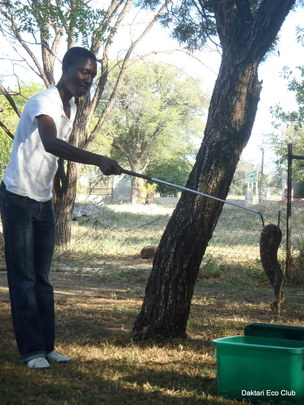 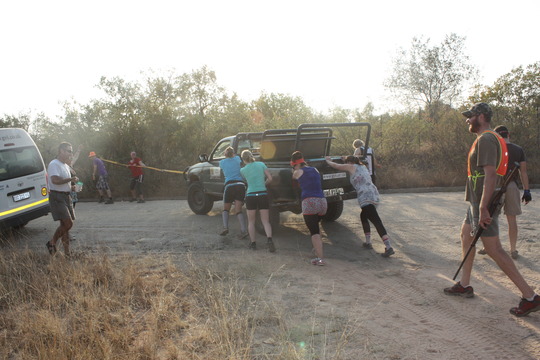 Pushing the car from Karongwe to Daktari

All the people who helped pushing 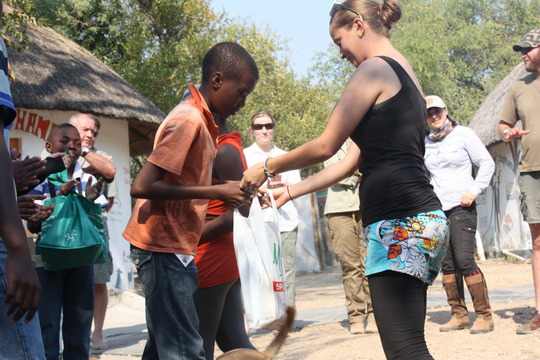 GVI's Beth is handing over the donated materials 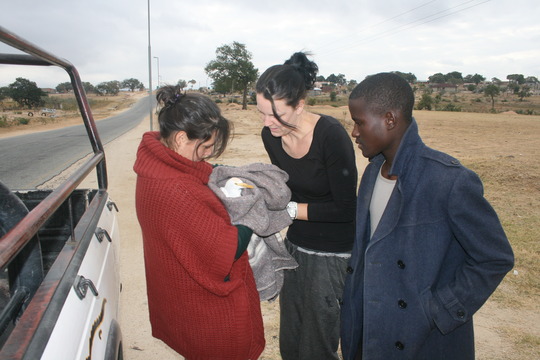 Willington handing over the Egret to Kirsten 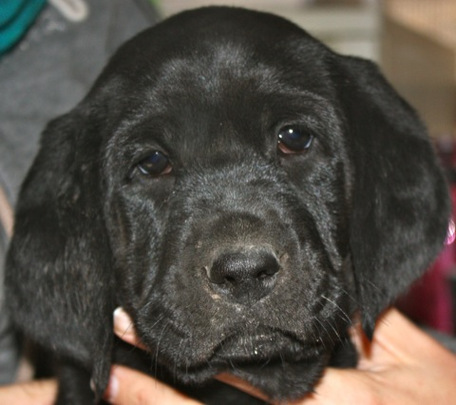 We have 3 new additions to Daktari since our last update....

Firstly we have May, a female Caracal. She's a big hit with our two male Caracals and teases them through the fence that seperates them!

We were called out to rescue Gerri Junior, a Juvenile Spotted Eagle owl who had crash landed and appeared to have broken her wing. After a trip to the vets we discovered that while it luckily wasn't broken, the ligament damage was so severe that she would never fly again. She now lives with Alex and Sam, our other two Spotted Eagle Owls, and they seem to have accepted her as part of their little family.

We also now have another dog at Daktari, her name is Loki and she is a Bloodhound/Labrador cross. She belongs to Risette, our Outreach Manager and goes to visit the children in the schools with her every week :o)

Presley, one of our Pied Crows had started to pluck her feathers out of her chest, we tried all sorts of lotions and potions to stop her doing this but nothing seemed to work, until we made her a sweater out of a sock! It's a funny sight seeing a black & white crow with a green jumper!! It worked a treat though and now her feathers are beginning to grow back!

The Meerkats have been moved into their new enclosure, they have lots of room now and lots of sand to dig in. The volunteers did a great job painting the walls outside, it looks amazing!

Princess Maya, our little Marmoset Monkey has also been moved into a new enclosure. She now has much more contact with the people and sunshine all day, now she's a happy little Monkey :o)

The staff and volunteers at GVI (Gobal Vision International) held a fundraiser for our Outreach Programme. They pushed their Toyota Hilux all the way from their camp to ours - that's 11k on dirt roads!! Everyone got dressed up and us and all our volunteers joined them for the last road, from our gate, to our camp. Then the kids pushed it over the finish line! It was a great day and they managed to raise over £2000 for the Outreach Programme!

The children, as always have been both a pleasure and a challenge. We recently 16 had children from a VERY poor school, they barely spoke English and all thought that poaching was OK. It was a real challenge for our volunteers. These weeks are very stressful, but these are the children who need us the most. If we can change the minds of just one of these children, it could make such a difference for their future. Knowing that there is another world out there available to them, that is only out of their reach if they let it be, could be the push they need to carve out a better life for themselves and for future generations, instead of following in their parents footsteps to a life of poverty or crime.

Please check out our Facebook page for daily updates from Daktari! 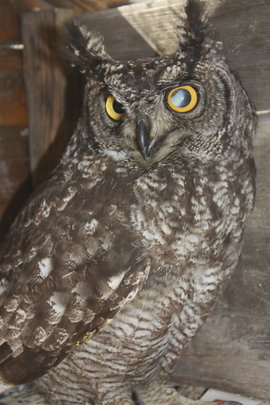 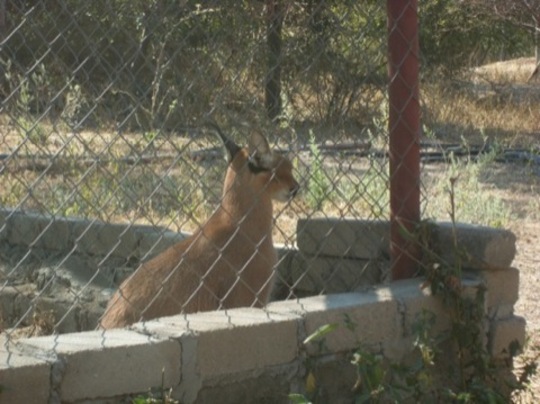 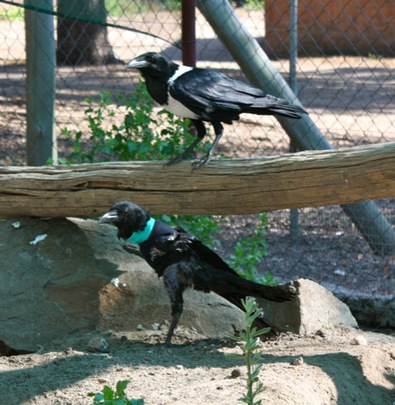 Presley in her very fashionable Jumper!! 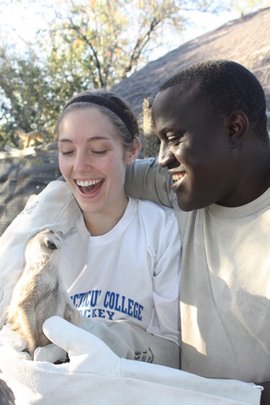 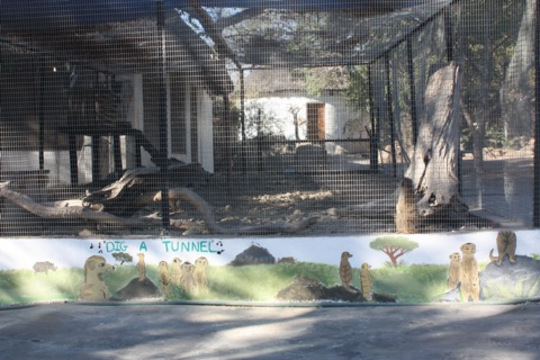 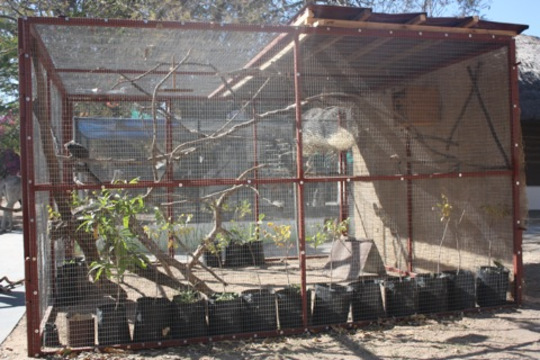 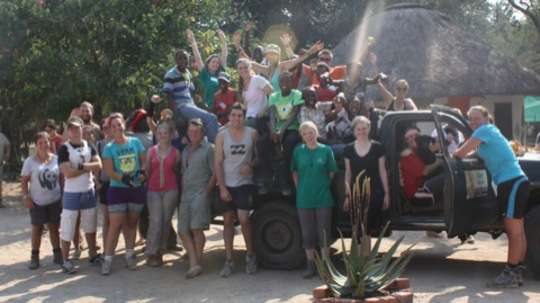 ‹ 1 ... 67 68 69 70 71 72 73 74 ... 86 ›
WARNING: Javascript is currently disabled or is not available in your browser. GlobalGiving makes extensive use of Javascript and will not function properly with Javascript disabled. Please enable Javascript and refresh this page.