Across the board, program participants see the myriad benefits of studying applied agricultural extension: expanding knowledge, securing professional advancement and staying competitive in their field. Most students expressed a desire to give back to their communities with their education, disseminating knowledge and working with different groups of people to promote behavior change.

But the average student salary (just $181) is rarely sufficient to cover expenses, especially for women with families.

“Most of the time we borrowed extra money from elsewhere and prepaid it the next month. As a result, we used to run our life on debt,” said one student.

But the Dowswell Scholarship changes everything. “After being awarded the scholarship, now we are able to live comfortably in the university, because the money helped to cover the gap,” she said. Having been relieved of their financial burdens, students can spend time and energy studying, rather than worrying about how to pay the bills. “After the scholarship we have been able to focus on our studies and improve our performance,” said another student.

Students also expressed dreams for the future of the scholarship program. Some hoped to see the program expand into other countries, allowing students to gain exposure. Others suggested extension of the scholarship’s duration to allow Master’s or Ph.D. level studies.

“Generally, we request that you continue empowering ladies financially, since they have a great contribution to rural development due to their high convincing power and interaction with society,” one student said. “The great percentage of agriculturalists in the village are women, so the interaction with women experts will help them to acquire improved technologies for their production activities and, finally, alleviate poverty.” 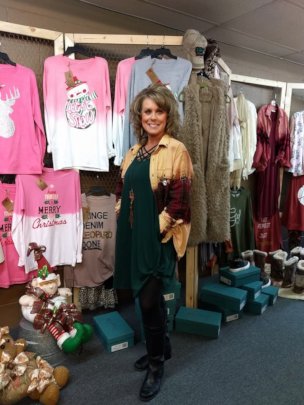 Susie shows off her creations at Mistletoe Market.

When Susie was just 15 years old, her mother taught her how to sew, and her lifelong love for crafts and design was born. Fifteen years later, in February 2012, that passion came to fruition when she founded Fabulous Designs by Susie, a specialty craft business in her hometown of El Dorado, Arkansas.

Before she started her business, Susie ran a successful RV park and raised two children with her husband -- but beyond designing and sewing outfits for herself and her daughter, she didn’t have time to pursue her true passion. Susie says that fifteen years later, when she and her husband decided it was time to close the RV park, she had a life-changing epiphany. She realized that she didn’t want to be an employee; she wanted to continue being an entrepreneur and own her own business. Susie’s husband supported her dream, building her a 12’ x 24’ “sewing house” in their backyard. Here she spent hours designing and making everything from purses to clothing to holiday décor.

While browsing Facebook one day in 2014, Susie saw an advertisement for Arkansas Women’s Business Center’s (AWBC) Mistletoe Market. Though she already had a customer base on Facebook, she wanted to expand her business, so she requested an application and joined the 2014 Mistletoe Market show.

“I jumped and took a leap of faith. I was so scared, but stepped out of my comfort zone,” Susie says. “I created new and different things that came to mind, but there was always worry and doubt that people wouldn’t like my creations and not buy anything.”

After her first show on November 8, 2014, Susie was hooked. At Mistletoe Market, people saw the value in the products that she had spent so much time and effort creating, and she sold almost everything she had made. Susie said she was humbled by the response of her customers, and that she knew immediately that she would participate in the event every year.

Fabulous Designs by Susie was a vendor at Mistletoe Market from 2014 to 2017. Each year Susie brought more merchandise, and each year she almost completely sold out. Mistletoe Market confirmed Susie’s suspicions — she had a large enough customer base to support a storefront.

In February 2017, Fabulous Designs by Susie opened a storefront at 1001 North College in El Dorado, Arkansas. Her love for sewing and fashion soon filled an entire 1,200 square foot building. Susie has expanded into marketing retail — jewelry, shoes, soaps and candles — but she hasn’t steered away from her main passion: sewing. The storefront has opened new doors for Susie, allowing her to maintain contact with her clients year-round rather than just seeing them once a year at Mistletoe Market.

Now that the AWBC holds two markets a year —Spring Market in April and Mistletoe Market held in November — Susie has twice the opportunity to expand her customer base. She enjoys the atmosphere at the events, especially meeting other entrepreneurs with the same passion for running their own businesses.

The Christopher Dowswell Scholarship Program aims to increase the pool of female extension agents by providing modest financial support during their mid-career degree academic program. During the first three years of its existence, the program’s number of scholars has grown to 89. In 2017, the number of countries increased from four to five, as the Distant Learning Program of the Extension Department at the University of Abomey-Calavi (UAC) in the Republic of Benin has been added to the program.

In December, Winrock evaluated more than 40 applicants from these five countries (Ethiopia, Mali, Nigeria, Tanzania and Benin), 29 of whom were selected for awards. Though Winrock received a few candidates for the MSc degree, these candidates were excluded from consideration, as the Christopher Dowswell scholarships are intended for only BSc and Diploma level students.

During a recent meeting, the board of the Sasakawa Africa Association (SAA), the key partner in the implementation of the Christopher Dowswell Scholarship Program, recommended an expansion of the program to all nine countries and 23 universities and colleges where the mid-career extension degree program — guided by Sasakawa Africa Fund for Extension Education (SAFE) — is active. Winrock wholeheartedly supports this strategy. However, the implementation of this strategy depends on our funding base. With the last 29 awards, all funds have been committed for the next calendar year (2018).None of the women receiving awards have dropped out of their academic programs, despite their very demanding family roles. They really deserve our support.

‹ 1 ... 4 5 6 7 8 9 10 11 ... 39 ›
WARNING: Javascript is currently disabled or is not available in your browser. GlobalGiving makes extensive use of Javascript and will not function properly with Javascript disabled. Please enable Javascript and refresh this page.