Thank you for supporting Partners In Health and our work in Haiti.

Though we’ve made significant progress, Cholera is unfortunately still a part of daily life in Haiti. Years after one of the world’s deadliest outbreaks of Cholera, government and international agencies are still working to stop the spread of the disease. Partners In Health is one of these, thanks to supporters like you.

First introduced by UN peacekeeping forces after the 2010 earthquake that struck Haiti Cholera has had a devastating effect on Haiti. 10,000 people have been killed and countless more have fallen ill. That included mothers, fathers, daughters, and sons as well as infants. What makes Cholera a tough illness to combat is the manner in which it spreads and the conditions in which it thrives. Haiti’s environment provides both.

As a waterborne illness, Cholera is contracted through contaminated drinking water. In the absence of latrines or public sewage systems, the world’s poor often drink from the same river or stream used for defecation — infecting water supplies. This means that developing nations and areas affected by natural disasters are often at risk of Cholera outbreaks. In the case of Haiti, this small country has the unfortunate luck of being both a developing nation and a nation routinely affected by natural disasters.

However, there is still hope for Haiti. The number of cases and deaths per year has dramatically decreased. A part of that is due to donors like you.

Relief came to the people of Haiti in 2012 when large scale vaccination programs were launched to protect the people from the harmful bacteria. PIH was among one of the outbreak’s first responders in Haiti. Within several months, PIH had set up 11 Cholera treatment facilities throughout the country and began treating the sick. These vaccination programs were highly successful in reducing the total number of Cholera cases and defying expectations by successfully protecting 90% of adults and 94% of children.

That was until October 4, 2016, when Hurricane Matthew struck the small island nation. As expected with this water-borne disease, after the hurricane hit there was again an increase in the number of Cholera case and deaths. Thankfully, PIH and other relief agencies were there and ready to help the survivors. PIH directly treated 1,682 patients following the hurricane and worked with the Haitian Ministry of Health to help vaccinate an additional 800,000 Haitians.

In Haiti, PIH remains the largest non-profit health care provider, and as such we will continue to work together with our partners there to protect the citizens with quality healthcare, reaching toward the ultimate goal of eliminating deaths and illness due to Cholera. Your support has contributed to the countless lives that were saved from Cholera. We thank you!

Thank you so much for participating in Advent International's campaign to support Partners In Health's maternal health program.  This year, Team Advent organized and conquered a 2-day, multi-activity relay event. Beginning in the scenic Cotswolds region outside of London, participants biked, kayaked and ran their way along the River Thames back to London, all the while raising funds and awareness for women living in poverty in the places where PIH works.

This support is helping to expand access to women’s health care in Haiti, Malawi, even the Navajo Nation, right here at home. That means family planning, safe births, and the regular check-ups every family deserves.

Congratulations to the athletes who completed this meaningful challenge - and thank you for contributing to the event's success and ultimately lifesaving health care for women who otherwise risk their lives by becoming mothers. 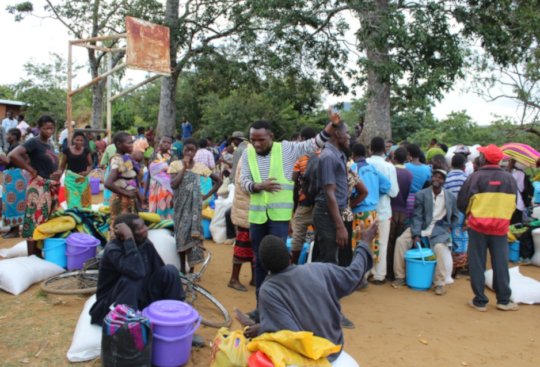 As Partners In Health continues relief efforts in southern Malawi following devastating downpours earlier this year, personal stories are emerging that show not only the flooding’s severe impact on families and communities, but also the vital support that, in weeks since, has provided hope, helped people rebuild their homes, and sustained livelihoods.

Stories like Maliko's. The 60-year-old described the loss of his home in tearful conversations with PIH teams, and framed the March flooding as the climactic result of three months of near-constant rain. This year’s unusually heavy deluge began in January and relentlessly weakened buildings and infrastructure across Malawi’s mountainous Neno District.

PIH teams have dealt with those roads and other challenges while providing relief efforts after the disastrous floods, working closely with national and local government to bring emergency supplies and support to more than 1,000 people in Neno. Thousands of subsistence farmers in the district lost all or part of their homes, as the months of rainfall culminated with 84 straight hours of downpours in early March, overflowing rivers and watersheds. Relief packages have included food, materials for cooking and for repairing homes, financial support, and even temporary, one-room shelters that are designed for expansion so families can build more as they’re able.

On behalf of our patients and colleagues in Malawi, thank you. Your support has provided hope to so many who have been impacted by these devastating storms, and will help them restart their lives in weeks and months to come.

‹ 1 2 3 4 5 6 7 8 9 ... 34 ›
WARNING: Javascript is currently disabled or is not available in your browser. GlobalGiving makes extensive use of Javascript and will not function properly with Javascript disabled. Please enable Javascript and refresh this page.