Remembering the earthquake of 2010

Eleven years ago, a magnitude 7 earthquake and its resulting aftershocks devastated Haiti, robbing our world of hundreds of thousands of people and leveling critical infrastructure. It was one of the most destructive natural disasters in human history.

Haitian survivors have rebuilt and reimagined health care delivery in the years since, which have been defined as much by generosity, determination, and progress as by broken promises, outbreaks, and international abandonment.

In the PIH podcast Voices of Haiti, Partners In Health doctors, nurses, and staff—all Haitians—tell their own stories of the earthquake. Some discuss the first moments and days after the disaster, while others reflect on the months and years that followed. 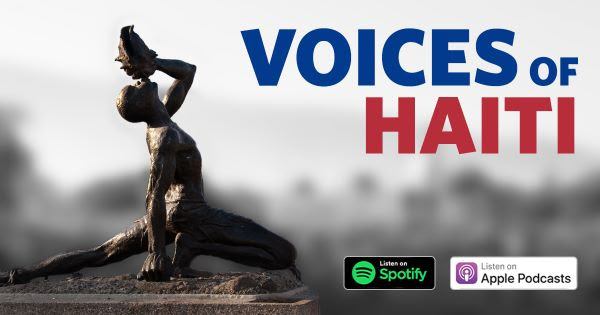 We invite you to take as much time as you need with these stories. Listen and remember with us.

A staff member with Socios En Salud, as PIH is known in Peru, does a door-to-door mental health screening with patient Nancy in a neighborhood near the capital, Lima, after they were connected by the Bienestár app.

Maritza has been a singer for years; but when her mother died of lung disease, the music lost its meaning.

It was a loss that the resident of Callao, Peru—a rural community outside of the capital of Lima—describes as devastating. Maritza, a single mother who shares a home with her daughter, grandson, and 85-year-old father, recalls not being able to sleep or concentrate on things that usually brought her joy. It felt like something was missing.

It wasn’t until she began speaking with a psychologist through Socios En Salud, as Partners In Health is known in Peru, that things began to turn around.

“Today, I feel more relieved,” says Maritza, who speaks with her counselor on the phone. “She understood me, despite the distance, and knew how to treat me.”

Maritza is one of nearly 5,000 Peruvians who have accessed mental health services through PIH since the start of the pandemic. This mental health support comes as part of PIH’s COVID-19 response in Peru, where PIH has provided more than 22,800 COVID-19 tests and offered more than 3,000 people social support, including medicine, food, and housing assistance.

“When we connect people, both physically and emotionally, within a community or a family [with] the resources they need, we will be providing them better opportunities,” says Carmen, director of mental health in Peru.

PIH has worked in Peru for more than 20 years. Its mental health work there has included providing tuberculosis patients with psychological support, establishing a safe house for women living with severe mental health conditions, and training local residents as community health workers, who refer patients to mental health centers and connect them with care.

During COVID-19, that work has adapted to also include group and individual counseling for families mourning the loss of loved ones, as well as an innovative messaging app called Bienestár. The app, run by PIH’s team of local psychologists and community health workers, offers mental health screenings and connects patients with care virtually. It currently serves three of the communities where PIH works.

Catherin, who supervises PIH’s work in the Trujillo community, says mental health is crucial for everyone. That’s because it’s never just one person who is affected. Mental health has ripple effects—on a family, a household, and a community.

“It is essential for a person to be concerned about their mental health,” says Catherine, “because this action can be replicated at home with their entire family and so, little by little, be concerning for overall health.”

Stigma, says Carmen, is also a barrier to accessing mental health care. Yet people have to realize they are not alone in experiencing difficulties. “Emotions are part of being human,” she says. 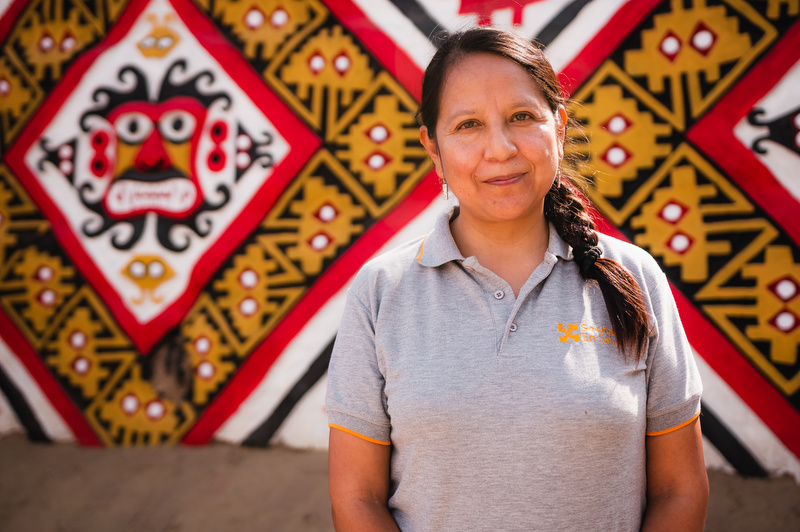 Carmen is director of mental health in Peru.

Carmen has seen SES’s mental health work evolve over the years. That journey has been both professional and personal—especially this year.

“A close relative of mine nearly died from COVID,” she says. “It was actually very difficult for my family. I spent a month dealing with that…we were all devastated.”

Much of that devastation came from the fact that her family, like many others affected by COVID-19, didn’t know how to tell other relatives when their loved one’s condition was worsening.

“With COVID, we need to work on that,” says Carmen, whose relative has since recovered. “It’s not just oxygen, or saturation, or the lungs; it’s also how we deal with our emotions.”

A pandemic and the uncertainty it brings—from work to health care to housing—takes a toll not only on physical health but on mental health. That makes a mental health response to the pandemic all the more vital.

For Maritza, the journey has been difficult. But she is making music again.

“It has been very beneficial for me to have a psychologist by my side,” she says. “Now, I can breathe. I don’t feel pain in my chest. The oppression that I had I was able to lift thanks to the specialist’s help.”

In August, Haiti’s health care system registered a major victory: the first COVID-19 patient to survive intubation and mechanical ventilation returned home to his family after 29 days at the University Hospital of Mirebalais, the state-of-the-art facility that has served as a lifeline for patients from across the country.

Yet even a hospital as well-equipped as Mirebalais can do little to alleviate the psychological effects of crises—from COVID-19 to the devastating 2010 earthquake—that have laid bare systemic inequities and compounded the hardships of daily life.

And as researchers with Partners In Health (PIH) found in a recent study, young people in Haiti are made especially vulnerable by their chronic exposure to stressful life events.

“We are exposed all the time to different types of trauma,” says Father Eddy Eustache, an ordained Catholic priest and the director of mental health with PIH’s Haitian sister organization, Zanmi Lasante (ZL). “Mental illness in Haiti exists on a large scale, and because of the worsening situation, that need for care continues to grow. So, we think the services we provide should be scaled up at the national level.”

Those services began in earnest in the weeks after the earthquake, when “Père Eddy,” as he’s known to friends and colleagues, met with Dr. Giuseppe “Bepi” Raviola, PIH’s director of mental health, to plan a coordinated mental health response.

In addition to the post-traumatic stress disorder (PTSD) it exacerbated, the earthquake revealed just how significant the burden of mental health conditions already was, with high levels of depression, anxiety, and stress have developed over decades of unemployment, violence, and political instability—or what Père Eddy has described as the “poverty package.”

It also exposed the severe lack of mental health care at that time—just a pair of psychiatrists for a country of 10 million people—and spurred the government and partners to act.

In the decade since the earthquake, ZL has expanded its mental health team to include 15 psychologists and social workers, who work in 12 clinics across the country. They’ve also trained 156 community health workers to address depression, anxiety, bipolar disorder, epilepsy, and schizophrenia. ZL has also published research around its long-term mental health response to the earthquake, as it built up a comprehensive, sustained mental health system to serve 1.5 million people.

Still, says Père Eddy, they’re fighting an uphill battle and not least because of the persistent stigma associated with mental health conditions. “There’s a lot of fear and shame,” he says. “And as a result, there isn’t the political will to address it.”

The Burden of PTSD Among Youth

That led to Père Eddy and colleagues to study the effects of the earthquake on the mental health of Haiti’s youth. In the study, published in 2018 in the Journal of Psychiatric Research, Père Eddy and colleagues analyzed data collected about 4 years after the earthquake from a mental health assessment conducted at a secondary school in Haiti’s Central Plateau.

Although the earthquake had centered in Leogane, a city on the southern outskirts of Haiti’s capital, Port-au-Prince, some 90,000 internally displaced persons migrated to the Central Plateau, including many of those who had been injured.

What the study found was concerning. The mental health assessment had included a Stressful Life Events Checklist—a 13-item questionnaire documenting exposure to a broad range of stressful life events, including sexual abuse, armed conflict, and separation from family.

Of the 120 students who had filled out the assessment, all reported at least one stressful life event; nearly three-quarters reported witnessing others being physically mistreated, and 42.5 percent said they had experienced physical mistreatment themselves. Additionally, just over 58 percent reported that there was a time when they felt that their life was in danger, and nearly 57 percent had experienced the death of a loved one.

To the surprise of the researchers, the study found that exposure to an earthquake or other disaster was not significantly associated with having PTSD. Nonetheless, it offered further evidence of the immense burden of PTSD among youth in Haiti.

“The earthquake did not bring mental illness to Haiti,” says Père Eddy, “but it did present to us an opportunity to raise awareness about the urgent need for quality care—to say to the world, ‘Something has to be done.’”

‘Unity of the Body and Mind’

In January, just as the first reports of the novel coronavirus were surfacing in China, Haitians commemorated the 10th anniversary of the earthquake and its more than 300,000 victims.

Reflecting on the legacy of the earthquake, Père Eddy says policymakers must understand the importance of mental health—what he calls “the unity of the body and the mind.” Ignoring mental health, he says, will only exacerbate poverty, feeding a cycle that is sure to continue in the absence of quality care.

“Dr. Farmer described the earthquake as ‘an acute and chronic crisis’ that compounded what was already a very difficult situation,” says Père Eddy. “And as our study shows, that’s true of mental health too. The exposure to stress was not a one-time event; it’s a product of the violence and poverty people live every day.”

Still, he remains hopeful: “We’re taking this opportunity, in the tenth year since the earthquake, to say to all: ‘We want these programs to continue and to grow so that more Haitians can have access to mental health care.’”

1 2 3 4 5 6 7 8 9 ... 35 ›
WARNING: Javascript is currently disabled or is not available in your browser. GlobalGiving makes extensive use of Javascript and will not function properly with Javascript disabled. Please enable Javascript and refresh this page.