Electricity (and a computer lab!) Are Coming to BeeHive

BeeHive School has recently received a generous donation from The ESC Foundation, a small German family foundation.  These funds will be used to install electricity in one of the school buildings.  The building has the offices, library, and a space for a computer lab.  As well as better lighting, the electricity will allow us to set the computer lab back up.  The teachers and students are excited to have the computer program back in the curriculum!

Computer Program
In June of 2008, two MIT students came to BeeHive School and helped set up a computer lab in BeeHive’s old location, a house the school rented.  The students brought 12 computers and a wealth of knowledge.  They set up the lab and taught the teachers basic computer skills, how to operate the lab, and teaching strategies.  Shortly after the lab was set up, Beehive students entered the lab with bright eyes and high expectations.  The program was successful and the students were able to learn basic computer skills such as mouse movements, keyboard typing, and file structure.  They engaged with educational games and learned basic programming.

The teachers also benefited from this lab, developing computer skills themselves.  They participated in teacher training programs and learned how to use computers as teaching tools.

When the school moved to its new location, the computers were placed into storage.  Now that the third building--which contains a room for the computers--is completed, the school is getting ready to set up the lab again and integrate computers back into the school curriculum.

Free online resources, such as Kahn Academy and resources from the British Council, will be incredibly helpful for teacher training, and student learning.  E-mailing the PTA, parents, and teachers will make communication much easier.  Connecting with other schools worldwide will also allow BeeHive School to enrich their curriculum and teach their students about other cultures.

Library & Lights
In addition to supporting the computer lab, Internet, and e-mails, electricity will greatly enhance the library.  The building was constructed with light in mind, and significant amount of light comes in the windows.  Despite that, it will be much easier for the students to read with additional lights on, especially when it’s dark outside.

A photocopier for the office would be also be useful, for worksheets, newsletters, etc, but the school does not have one right now. Unfortunately, in Malawi copiers cost around 800,000 kwacha (more than $2000), so they’re likely not going to be purchasing one soon.  Even so, having electricity will mean that if the school was able to obtain a copier, they would be able to use it.

We will update with photos once the work for the electricity is done!

It’s getting close to the end of October. That means Harvest festivals and Halloween here in the US.  In Zimbabwe it is the onset of the rains, time to plow, prepare for planting – and prepare for final exams!  Exams are written in late November and December.  They determine whether or not students continue on to the next grade.  For Grade 7 children, their exams at this last year of Primary School will determine which Secondary School they are qualified to attend.

Being able to attend school, something we take for granted here in the US, is a life changing opportunity for a young girl in Africa.  Studies show that girls that attend Secondary School have a greatly reduced risk of contracting HIV-AIDS and are often able to stay out of abusive situations.  The more you contribute, the more girls ASAP will be able to help in the coming year.  The money you generously donated will have a huge impact on the life of a child in Zimbabwe.

At the end of December, ASAP will select the new girls to be funded for all three terms of the 2013 school year.  The need is great.  The number of students ASAP can assist depends on your donations.  We will select the most deserving girls and look forward to sharing information about each of these fortunate children in January.  Please continue to give generously!  Thank you again. 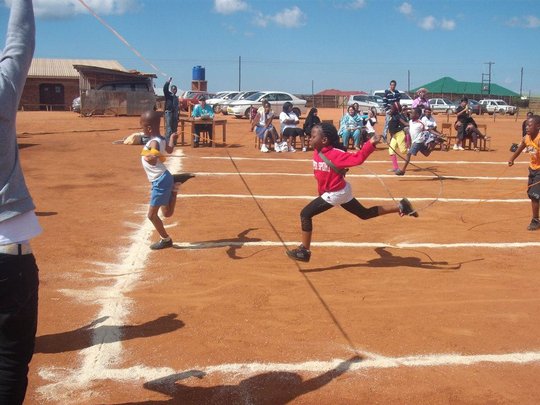 Students race to the finish line
I can't believe it's already time for our next update!  BeeHive School is doing great - the yearly "Sports Day" was a smashing success and the students did just as well in their Cambridge International Exams.  Sports Day is an end-of-term tradition for the school.  The school is broken into four “houses” or teams that compete for the House Cup - a giant trophy!  BeeHive’s Lions, Tigers, Cheetahs and Leopards strive to outperform their peers in this good-natured competition through sporting events, mental math matches, spelling competitions, acts of kindness, good manners and class participation.  During the last week of term, the houses competed in Sports Day.  Events in jump rope, soccer, netball, three legged, potato sack and running races allowed the students (and teachers!) to each points for their houses.  The Lions beat out the others, for the third straight year. Another highlight of the last week of school was the end of term assembly where the new class captains were announced, Academic Achievement presents were awarded, and the House Cup was presented to the Lions. The students may have left the school in early July, but the excitement did not end.  The results for the Standard 7 class came a few weeks later.  Standard 7, the most advanced grade at the school (and also the smallest) took the University of Cambridge International Exam.  The exam covers science (biology, chemistry, physics, and scientific enquiry), math (geometry and measure, handling data, and number) and English (reading, usage and writing).  Each section is based on a score of 0-6, with 6 being excellent, 3 good, and 0 poor. Students, parents and teachers were all thrilled with the results.  The class got an average score of 4.1 for science, 4.8 for English, and 3 for math.  It’s nice to see the hard work of everyone pay off in a quantifiable way.
The school is looking forward to another great term ahead!  We'll be in touch with more exciting updates! 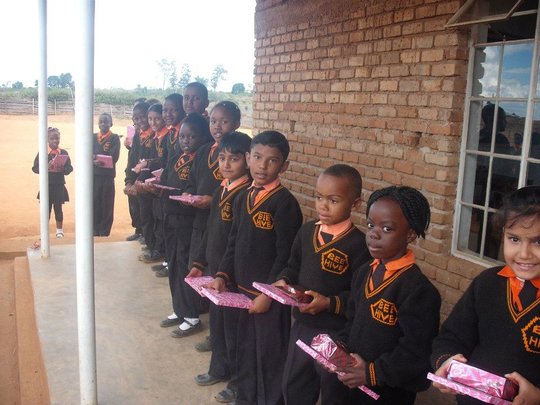 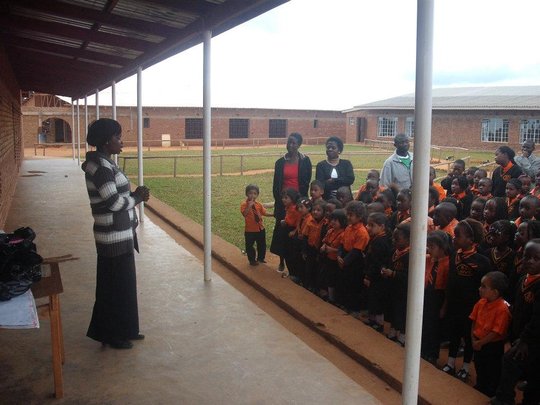 The last day of school - end of term assembly 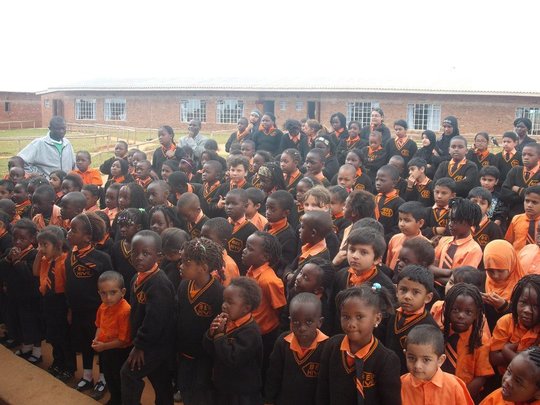 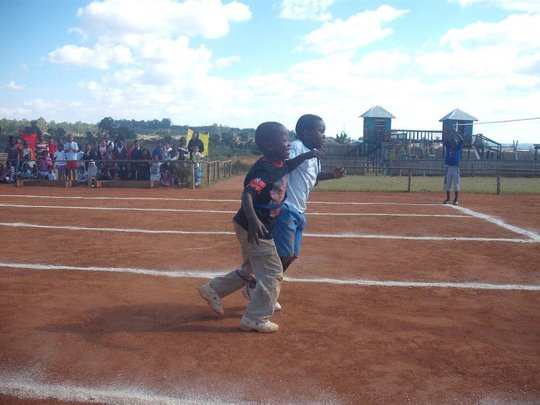 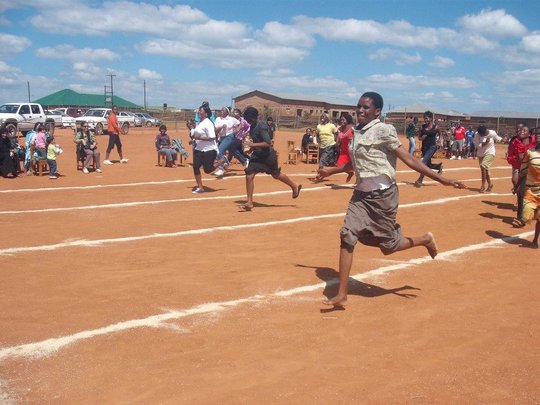 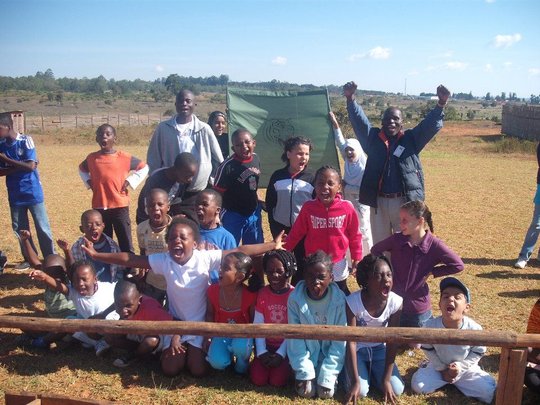 The Tigers cheering on their teammates 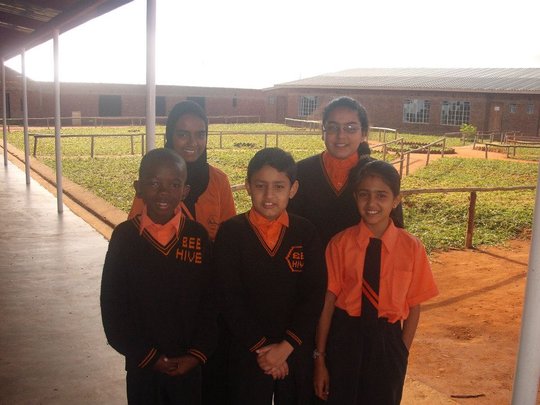 Congratulations Standard 7 Exam Class!
‹ 1 ... 4 5 6 7 8 9 10 11 ... 18 ›
WARNING: Javascript is currently disabled or is not available in your browser. GlobalGiving makes extensive use of Javascript and will not function properly with Javascript disabled. Please enable Javascript and refresh this page.