Dribbling away to a happier life

Name of Child: Udaya Kumar ( Name changed to protect the Identity of the child)

A perfect case in point is Udaya Kumar, a star football player from the slums of Vyasarpadi in Chennai. Udaya Kumar was one of the 5 children, his single mother struggled to raise. Poverty ridden, she worked hard to make ends meet.

Frustrated by his circumstances Udaya began hanging out on the streets with his friends till late night. He quit school when he was12. In a desperate bid to escape from reality he turned to substance abuse and alcohol.

The Change: The situation would probably have gone from bad to worse, had it not been for the timely intervention of the SCSTEDS team. Having realized that sports goes a long way in the development of children, the SCSTEDS team encouraged Udaya to be a part of their football team. After he joined them, he was gradually and gently encouraged to join school. Slowly but steadily he began to show interest in his studies. He also started focussing on his practice sessions and made his way towards the under 18 Tamil Nadu state team!  He further went on to represent India in the Homeless Soccer World Cup held at Sweden in 2011.

He continued his studies and pursued his bachelor’s degree in Visual Communications. Today a hero for the other youngsters at Vyasarpadi, Udaya Kumar is a perfect example that shows the power of sports in moulding a child’s life.

Udaya Kumar's Life Today: Udaya Kumar has recently cleared his service commission exams for the Tamil Nadu Police selection. He is the first youth in the entire slums of Vyasarpadi to get into a Permanent Government job. 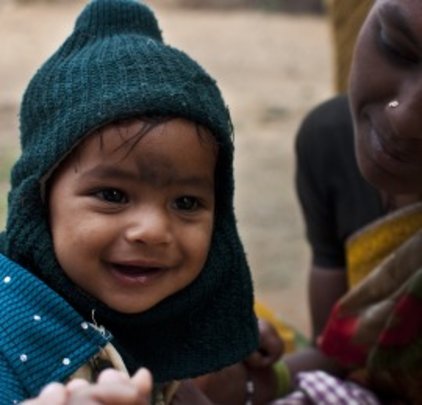 Immunization Programme is one of the key interventions for protection of children from life threatening conditions, which are preventable. Yet, an estimated 11.6 lakh children die every year within one year of their birth due to lack of immunization.

‘Happy First Birthday’ was a CRY initiative to ensure 42,971 newborn children across CRY supported projects across India to have access to the mandatory vaccination dosages that immunize them from easily preventable diseases and any fatal outcomes. With Your support we have been able to ensure complete immunization of 44,207 newborns. CRY and its partners will continue to work with the parents, communities and public health centers to overcome challenges that stand in the way of children receiving immunization.

Ansh a nine-month old little boy lives in a rented home with his mother and father in Tejpur, Indore, Madhya Pradesh. His father works as a tailor and mother is a homemaker. Soon after he was born Ansh had only received the BCG vaccination and no other vaccines because he did not have a vaccination card and neither was he enrolled in a nearby Aaganwadi Kendra. CRY along with the project partner Deenbandhu spoke to the mother and shared the importance of immunisation and the different ways to prevent diseases. Through regular interaction the mother understood the benefits immunisation would have on Ansh and was motivated towards regular vaccination.

Ansh was enrolled in an Aaganwadi Kendra so that he could be regularly vaccinated and he also received his vaccination card. After the enrollment in the Kendra, Ansh’s mother was regularly informed about the vaccinations so that she would not miss any cycle. Now, Ansh is getting his regular vaccines, his weight is increasing as per his age and he is perfectly healthy. Your support can ensure many more children like Ansh begin a healthy start to life.

CRY’s partner Mitwa in Chhattisgarh, has been working on the issue of immunisation in the Bilaspur slums. The project team helps create awareness through meetings and discussions with Mahila Mandal (Women Groups), adolescent girls and Anganwadi workers to ensure 100% immunisation.

One family in the slums did not take their 1-year old son for immunisation. The members of Mahila Mandal identified this family and spoke to the parents to ensure the child receives the required vaccines. During one discussion with the family they found out that the father was against immunisation as the child would get fever post receiving the vaccine.

The Mahila Mandal shared this with the organisation, the team continued to motivate the mother and share benefits of immunisation. Due to continued efforts, the mother agreed to take her son for immunisation without the knowledge of her husband. Today the child is immunised against Measles.

CRY along with Mitwa is building perspective on immunisation and motivating the mothers to come forward and overcome challenges that stand in the way of having their children immunised. Your support can help us give many children a healthy start to life.

CRY thanks you all for supporting the project.

Name of the Child: Ambika (Name changed to protect the identity of the child)

Ambika (13 yrs) was made to discontinue her education from 7th standard, in the year 2011, from the Kalyanpuram Corporation High School by her parents so that she could help the family cope up with the soaring economy.

Ambika is the eldest of four children. Her mother is a domestic worker and her father is a labourer and a person depending on Alcohol. He hardly gives money to the family and least bothers about the members of the family. It is Ambika’s mother who takes care of the whole family. She works in 3-4 households’ right from early morning till dusk. When she comes home it is usually 8.PM and brings food to the family. All the four children wait in hunger till the mother comes home with food. During the day, it is the mid day meal which feeds the children. The father comes home late night and quarrels with her mother. Sometimes the father also beats up her mother and it is Ambika who pacifies and consoles her bleeding mom. One day her mother explained the family’s economic situation and requested her to quit her school to take up a job in a household as domestic worker. Running errands for the house-hold became her duty for the next six months.

Ambika was born and brought up in the slum of SM nagar, Vyasarpadi. The outskirts of SM Nagar are known for dumping garbage. Moreover, the drinking water provided by the corporation is always a mix of sewage water and the water is all the time black in colour. As a result SM nagar is a hub of communicable diseases. During rainy season, the roads of SM nagar are drenched with garbage and sewage water. Mosquitoes and flies raid all the households. Most of the children in this locality all the time have some physical ailments and visit the hospital for medical treatments. The health centre in SM nagar is most of the time dysfunctional and requires constant advocacy and lobbying with the corporation health officils. It is during one rainy season Ambika attended the children collective meeting of SCSTEDS with her friend and was astonished to hear her friend talk about the problem of mixture of sewage water in the drinking water. Till that day, Ambika was thinking that being poor and a slum dweller it was their fate to drink that water. The members of the collective discussed in detail about the ill-effects and ways in which it could be rectified. Finally, the group also decided to draft a petition for submission to the Local Ward Councilor demanding for quality and safe drinking water. Ambika was very impressed with the group activities. She expressed her wish of continuing her education and joining the group. The group cohesion and the member’s interest towards asserting their rights influenced Ambika to a greater extent. Ambika also understood that education plays a significant role in shaping the group member’s personality. So she voluntarily spoke with SCSTEDS staff on helping her continue her education.

The very next day, SCSTEDS staff visited Ambika’s home and spoke with her parents. Her parents were very stubborn in not sending Ambika to the school. Regular counseling by Community workers and project staff was enabled and after 4 months of continuous intervention, Ambika’s parents were convinced. The academic year 2012 was really a dream come true year for her. She has been admitted in class 8 in the Erikarai Government High School. She now desires to complete her school education and pursue her higher studies in Law. Becoming an advocate is Ambika’s ambition in life.

‹ 1 ... 7 8 9 10 11 12 13 14 15 ›
WARNING: Javascript is currently disabled or is not available in your browser. GlobalGiving makes extensive use of Javascript and will not function properly with Javascript disabled. Please enable Javascript and refresh this page.