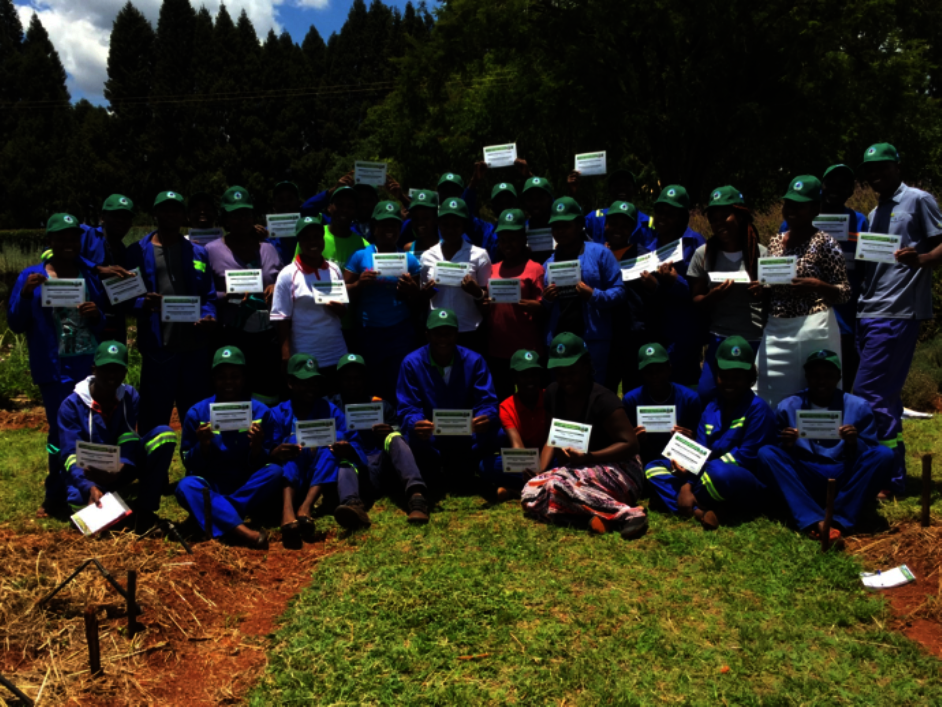 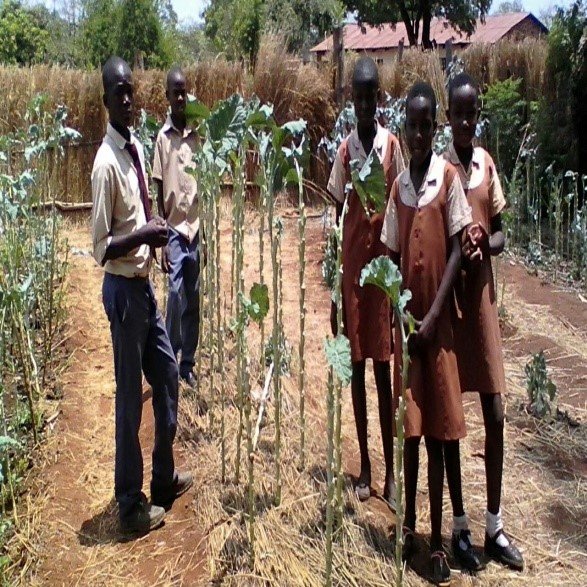 Pupils in their vegetable garden

The pupils of St Michaels and St Johns Primary Schools have shown great interest in learning about Conservation Agriculture and started teaching their families how to apply the principles in their own fields. Much work has been put into educating teachers and the students but the initiative that they have taken has been amazing. Zimbabwe faces many challenges such as lack of rainfall and limited resources. While Foundations for Farming helps by providing technical support and inputs such as seeds and tools like hoes and watering cans, the teachers and pupils have taken all this in and used it as a learning platform not just for the schools but for their communities.

At St Michaels the teachers have shown a lot of initiative in applying the skills that they learnt to educate their pupils. They decided to conduct an experiment together with their pupils on how locally available resources can be used in Conservation Agriculture. Tobacco is a commercial crop grown in most parts of Zimbabwe. The experiment was to investigate the effects of tobacco chaff when used as mulch in a maize plot. The other piece of land was covered with crop residue and leaves as mulch (normal mulch) and they intended to compare the outcomes of these plots. Overall the teachers and their pupils have shown that they are capable of doing anything if they work together as a team.

This hard work has extended not only to students and teachers doing Conservation Agriculture but communities are excited about this project. The communities look up to the schools as learning platforms and a way to learn how to feed themselves and their families.

Please support this project to help the teachers and children of St Michaels and St Johns to flourish in their ability to get better crop yields for their families. 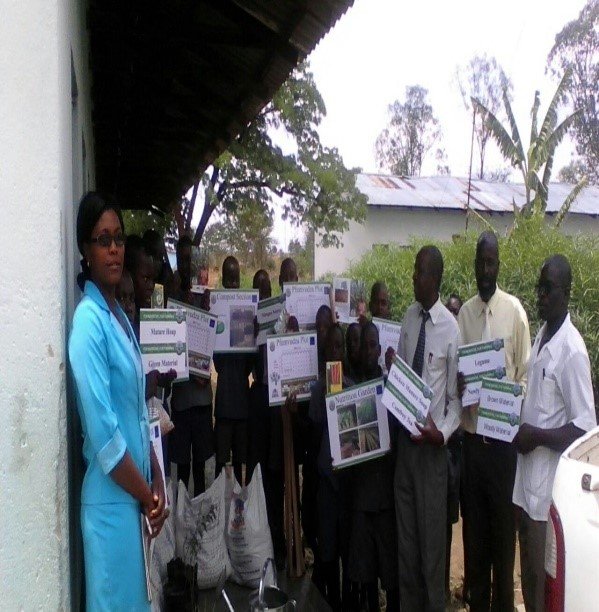 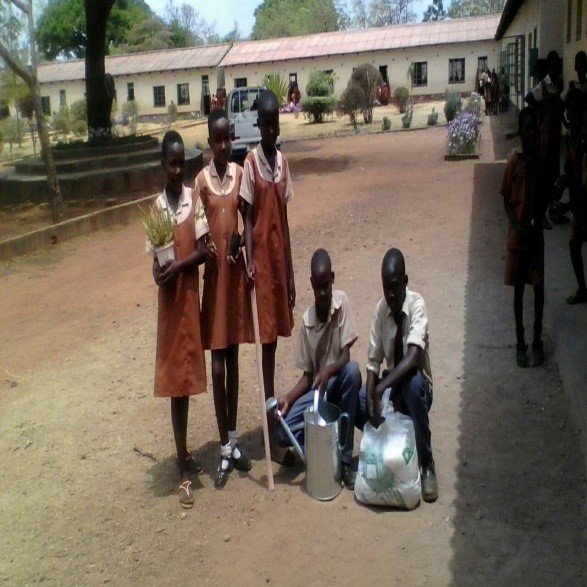 Pupils on the way to their garden 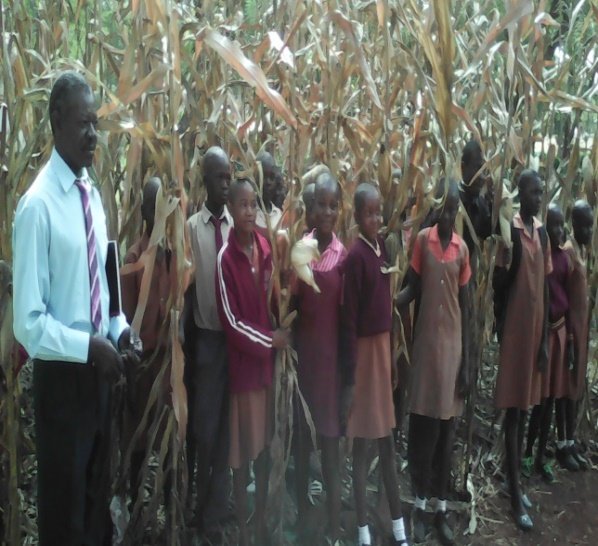 Mr Marima is a grade 6 teacher from St Johns primary school in Murewa district. Mr Marima has been teaching at this school for 5years and he has always had a passion for farming although he never produced anything worth mentioning. Mr Marima has his own small garden in his backyard which he uses for growing vegetables and maize during the rainy season. Mr Marima lives within the school premises therefore space is limited to expand his garden.

When Foundations for Farming (FfF) invited two teachers from the school to attend training in 2014, he immediately volunteered to attend as he always had the hunger and passion to learn more about farming as he grew up in more of a rural setup and farming was the family’s main source of income. Mr Marima and Mr Chipfunde attended a four day training at Foundations for Farming and for the first time he said “his eyes were opened’’.  After the training Mr Marima started implementing some Conservation Agriculture (CA) concepts in his small garden i.e. minimal soil disturbance and mulching. Miraculously the Ministry of Primary and Secondary Education (MoPSE) announced that Agriculture was to be introduced into primary schools as an examinable subject which encouraged Mr Marima as he introduced his class fully to the concepts of CA which up until now he had only been able to do during their Environmental lessons.

Mr Marima asked the school administration to support the initiative by allocating the pupils a piece of land to implement the theory into pratcice. The school already has a piece of land which is about half an acre where the school has been growing maize in previous years. Unfortunately the school never got more than 400kg of maize from this piece of land since they started farming on the plot. This discouraged the school as they committed the little resources they had but harvested very little.

In the 2014-2015 agricultural season, Mr Marima and Mr Chipfunde implemented what they had been taught (CA principles) by FfF on the piece of land they were allocated and the change they have experienced is amazing. They were able to use fewer resources in planting their field (Pfumvudza plot) and on just 0.15 of a Hectare (624m²) the teachers and their pupils were able to harvest just over 400kg of maize from their Pfumvudza plot only. This is more than a 3-fold increase in crop yield! The school administration had never thought that such a small plot could produce a higher maize yield than the larger plot they used to farm on. This has really encouraged the teachers and the pupils. Therefore this season they are planning to grow both maize and beans. After this experience the school administration as well as other staff members have embraced this initiative and are eager to start practicing it in their own fields.

"The maize yield from the schools Pfumvudza plot is expected to improve this season if the rains are favourable. Other than that the teachers are more than willing to see this system of farming being practiced in the entire community as it really is a panacea to food insecurity & poverty’’, said Mr Marima.

ZET invites you to support training for more teachers like Mr Marima in Conservation Agriculture. Thank you for your donations. 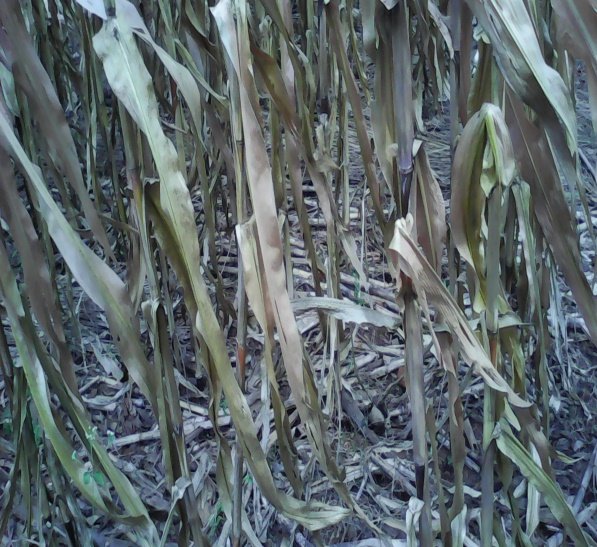 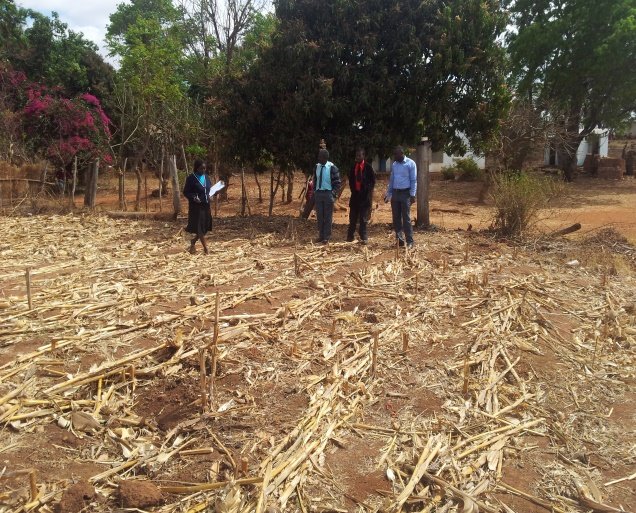 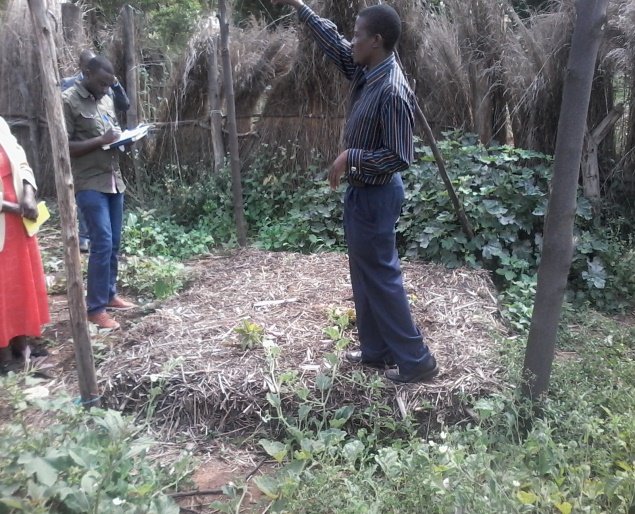 Donating through GlobalGiving is safe, secure, and easy with many payment options to choose from. View other ways to donate
Zimbabwe Educational Trust (ZET) has earned this recognition on GlobalGiving:

GlobalGiving
Guarantee
Donate https://www.globalgiving.org/dy/cart/view/gg.html?cmd=addItem&projid=20928&rf=microdata&frequency=ONCE&amount=25
Please Note
WARNING: Javascript is currently disabled or is not available in your browser. GlobalGiving makes extensive use of Javascript and will not function properly with Javascript disabled. Please enable Javascript and refresh this page.