Annual Report: You've Helped Us Reach 1,324 Children in One Year! 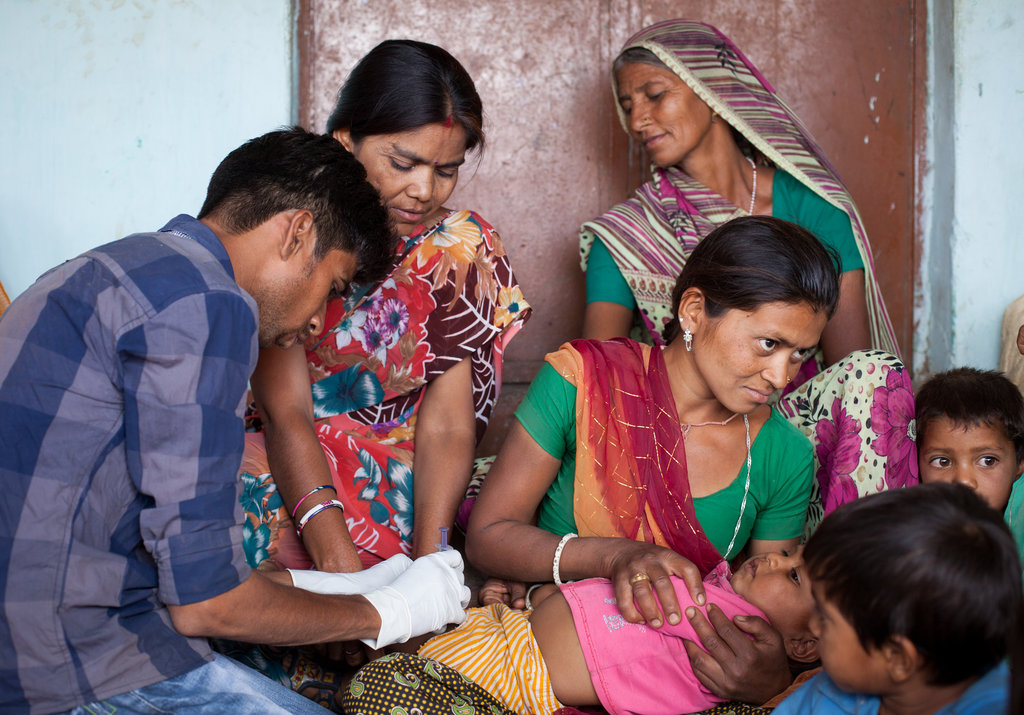 A health worker gives a child an immunization.

Below is an update on our immunization program, which according to MIT researchers and authors of "Poor Economics" (http://pooreconomics.com/), Abhijit Banerjee and Esther Duflo, is "one of the most impressive we have evaluated, and probably the one that has saved most lives." We hope that you are as proud as us to be a part of such a great success. The report below summarizes our progress in the past year, from March 2012 - April 2013:

During the reporting period, 1,308 camps were conducted against the target of 1,422 camps, which means 92% of camps were held. A total of 114 camps had to be cancelled due to reasons as mentioned below:

Apart from the routine vaccinations, 2,429 children were given treatment for illnesses such as fevers, coughs, colds, eye or ear infections, diarrhea and skin infections.

The camps also registered 1,783 women for antenatal checkups, an improvement of 230 compared to last year. Of these total registered women, 1,645 received one dose of tetanus toxoid vaccine and 1,377 women received both the doses. The components of antenatal checkups included a hemoglobin test, urine test, blood pressure measure and counseling on care during pregnancy.

This has been an incredibly successful year for our Health team at Seva Mandir. We have been working hard to make sure that quality health care reaches the communities who need it the most, and we couldn't have done without your support!

Please feel free to comment or rate our report, and share our good work with your friends!

What did Bindu say about your support to her child 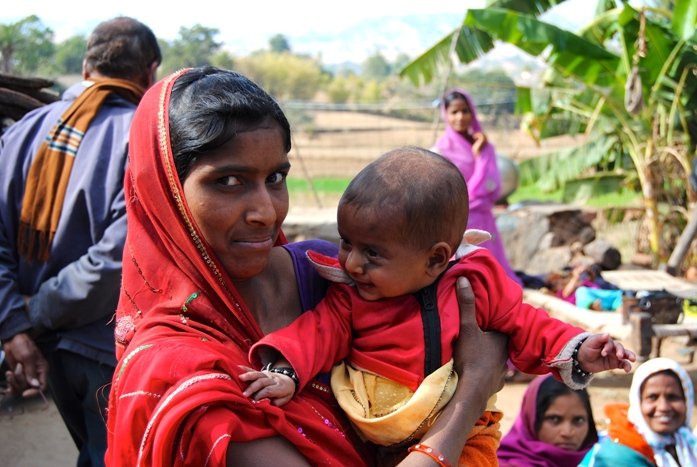 Bindu with her child

We would like to thank you for your support of the Immunization for Tribal Children and Young Mothers program.  This month, we would like to share with you a story of one of the many young women and children whose lives have been impacted by your contribution to this program.

Bindu, pictured here with her child, is one of women who attended Seva Mandir’s immunization camp on the 17th of this month in a village that is part of the Jhadol block.  The immunization camp takes place in front of one of the villager’s houses, across from the village school where the children come and say hello on their lunch break.

Attended by a nurse, the village traditional birth attendant and balsakhi, the immunization camp serves many purposes.  As the women wait for their turn to have their child given life-saving immunizations, they talk to each other about their families and babies.  They share stories about their lives and there is a happy mood among the women.  They also have conversations with the Seva Mandir trained nurse, traditional birth attendant and bal sakhi about healthy breast feeding practices and nutritious food for their babies and themselves to maintain good health.

This Seva Mandir immunization camp is highly valued by Bindu and the other women.  Bindu, who has two children, one 4 months old and one 2 years oldexplains that she brought both her children to the immunization camps to receive their full rounds of vaccinations.  She says she has been able to do this because Seva Mandir’s immunization clinic is always run on the same day of every month, making it easy for her to remember the day she is supposed to attend and ensure she makes it to the camp.  Unlike government clinics, which are open for immunizations on irregular days and are often unattended when they are meant to be open, she explains that she knows Seva Mandir’s camp is reliable – and the other women agree with her.  This makes her walk to the clinic, which is between 2 and 3 kilometers long, and finding someone to take care of her other child while she is away worthwhile as she knows someone will be there for her to ensure her child gets the services he needs.

Your continued support ensures that Bindu and the rest of the women from the 115 camps Seva Mandir runs a month have somewhere reliable to go where they can receive life saving vaccinations for their children.

Thank you for helping us provide this much needed service to rural and tribal communities. 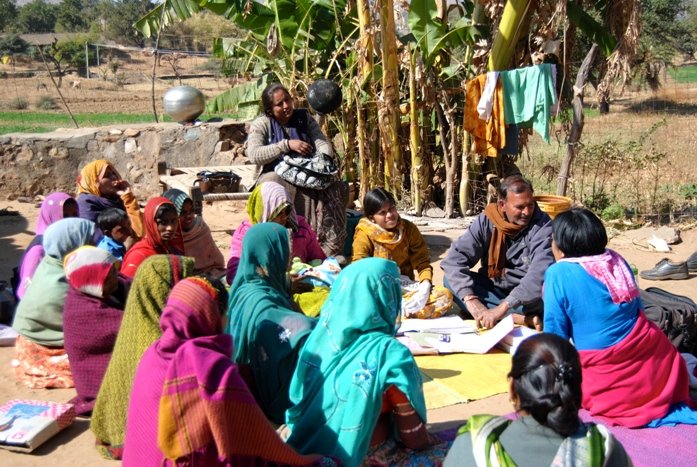 You can help us even more in this holiday season 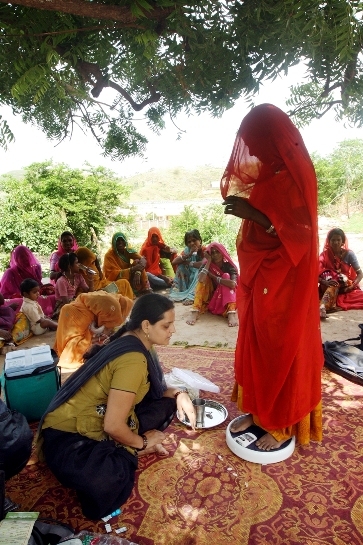 Thank you for your continued support to our project 'Immunization for tribal children and women'.

With your support we are about to begin a new year and are excited about the hopes and challenges it will bring. And at this yearend, we would like to share half yearly progress report of this project. We have attached the progress report for you to know how exactly YOUR support is creating real change. Below is the snapshot of the progress report:

o 610 children were registered in the 661 immunization camps where they receive vaccination for BCG, DPT1, DPT2, DPT3 and measles were provided to these children.

o 987 children were given treatment for diseases such as fever, cough, cold, measles, eye or ear infection, diarrhea and skin infection.

o 905 young women registered in these camps for their antenatal checkup.

We are able to make these progresses because of YOU.

And in this holiday season you can help us make more exciting progresses by doubling the impact of your donations.

From December 1, 2012 at 12:01 am ET and December 31, 2012 at 11:59 pm ET, Global giving has created a 'Recurring Donation Campaign' where all the recurring donations made by you will be matched up to $100 per donor per project. We request you to sign up to a monthly donation by clicking on recurring donation of an amount that you can afford and help us to make such more progresses in coming new year.

We look forward to your support and thoughts on this report. Once again, wish you a very happy holiday season to you and your family. 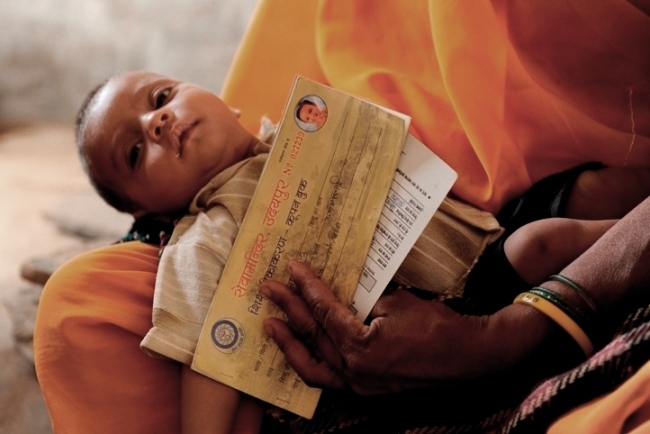 Mother holding her child to get his vaccination. 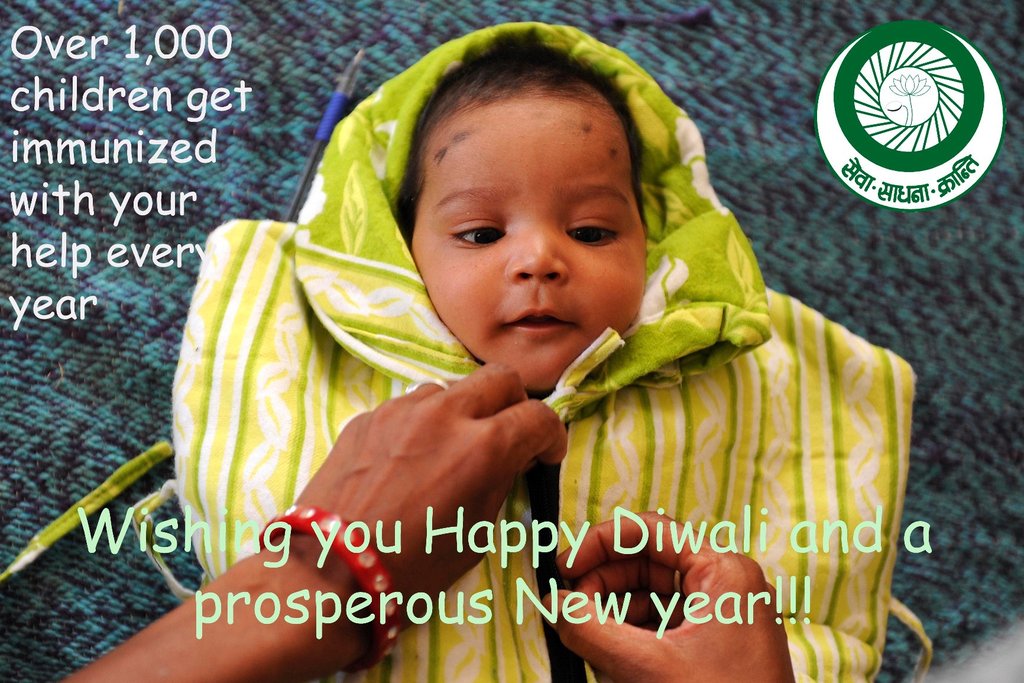 These all children trust your support

I am here again to share with you happiness, light and tranquility on this Diwali from all the 1,000 children and their mothers you are immunizing through this project every year.

Diwali is a festival of lights and candles. It symbolizes the fact that there is more good in us than bad and that we all have to keep working on it. This is what you have been doing for all these little children. The problems in this world are endless, the struggles break us down everyday and yet we all come together to support each other. This is the message from all the children and mothers from our area.

Happy Diwali to all of you and we also wish you a great year ahead.

You helped Narmada's child getting an immunization shot 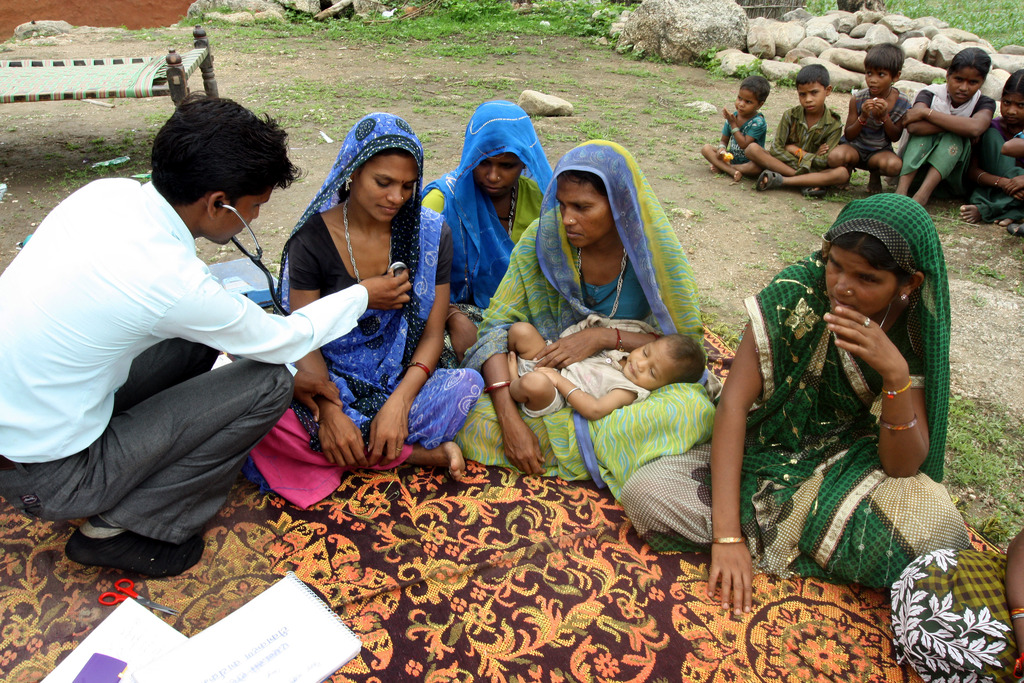 Narmada with her child in Immunization Camp

Narmada is pictured in the photo holding her son Rahul (15 months) as he getting an immunization shot in Seva Mandir's immunization camp.

Narmada is from Balvi village.  Narmada is joyful, open and personable during the interview and happy to share information. Rahul crawls around on the shaded dirt floor chasing a small kitten, un-phased by the immunization shot and medical procedures.

Throughout her interview Narmada mentions the lack of access to government health facilities.  In fact, the government facility is prohibitively far and even for this camp she had to travel 02 km.  During this camp she has left her other child with her mother-in-law in order to make the journey to the camp with Rahul across the hot desert terrain.

We then ask Narmada about the other women in her village and their knowledge and use of immunization camps such as this.  She explains that she tells the other women that immunizations are a necessity. However, many women tell her they will come and never turn up for the camp.Narmada delivered both her babies at the government hospital and the deliveries were done by the Total Birth Attendant (TBA) Devli Bai. For herself, she explains that if the Devli Bai, did not exist she would not get vaccinations or even go to a hospital for delivery.