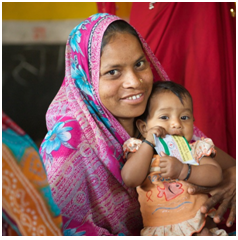 “My child is only of one and a half months old. I have come to Seva Mandir’s immunization camp to get the first course.  We used to face a lot problem before these Seva Mandir immunization camps. We had to walk a lot to go to immunization camps and it was very tough for the pregnant ladies. Now, Seva Mandir health workers come to our village and they have also arranged emergency vehicle for us. Now all the information about government health schemes comes to us through Seva Mandir,” says Geeta from Girwa block.

On the 4th of every month, Seva Mandir holds an immunization camp in a small village in Girwa Block.  The camp is very well attended by pregnant women and mothers with young children.  They know they can count on the regular attendance of Seva Mandir-trained medical staff who administers inoculations and antenatal care competently and hygienically.  Every year, Seva Mandir holds immunization camps in over 100 villages in a program that poverty researchers and M.I.T. Professors Abhijit Banerjee and Esther Duflo have called “the most impressive we have ever evaluated, and probably the one that has saved most lives.” (http://www.sevamandir.org/wp-content/uploads/2013/07/Poor-Economics.pdf)

Seva Mandir provides training, medical equipment, stipends and supervision to over 323 Traditional Birth Attendants and 99 Balsakhis (Friends of Children)from our partner 152 villages in 2013. Together they reached out to 7,003 pregnant women.

Seva Mandir recently organized a training workshop of 4 days at Kaya Training Centre from 4th to 7th May, 2014. More than 50 TBAs attended this training. TBAs were given training on how to perform safe home delivery, about care and precautions during pregnancy.

Here is the full video of training https://www.youtube.com/watch?v=w9oRjYBJR1I

A photo essay on the immunization camp

Thank you for supporting Seva Mandir's immunization camps The generous donations by you will help provide healthcare to many tribal women and children.

Here's a quick update on our immunization programme.

Last year,  immunization camps were conducted in 113 hamlets across the five blocks, focusing on areas where government maternal and child health centers were not operational. This year, 1308 camps were conducted and a total of 1324 children were registered in the camps, against 1267 children registered in the previous year. Apart from the routine vaccinations, 2429 children were given treatment for diseases such as fever, cough, cold, measles, eye or ear infection, diarrhea and skin infection. This year, the camps  registered 1783 women for antenatal checkups against 1553 women last year. Of these 1783 women,1645 received one dose of tetanus toxoid vaccine. Antenatal checkups included hemoglobin test, urine test, blood pressure measure and counseling on care during pregnancy.

Attached is a photo essay on the immunization camp held in Girwa this year by John and Felicia Pheasant from UK, consultants of Seva Mandir who had visited this immunization camp. We do hope you enjoy the Photo essay.

You Added Happiness in Many Lives..... Thanks 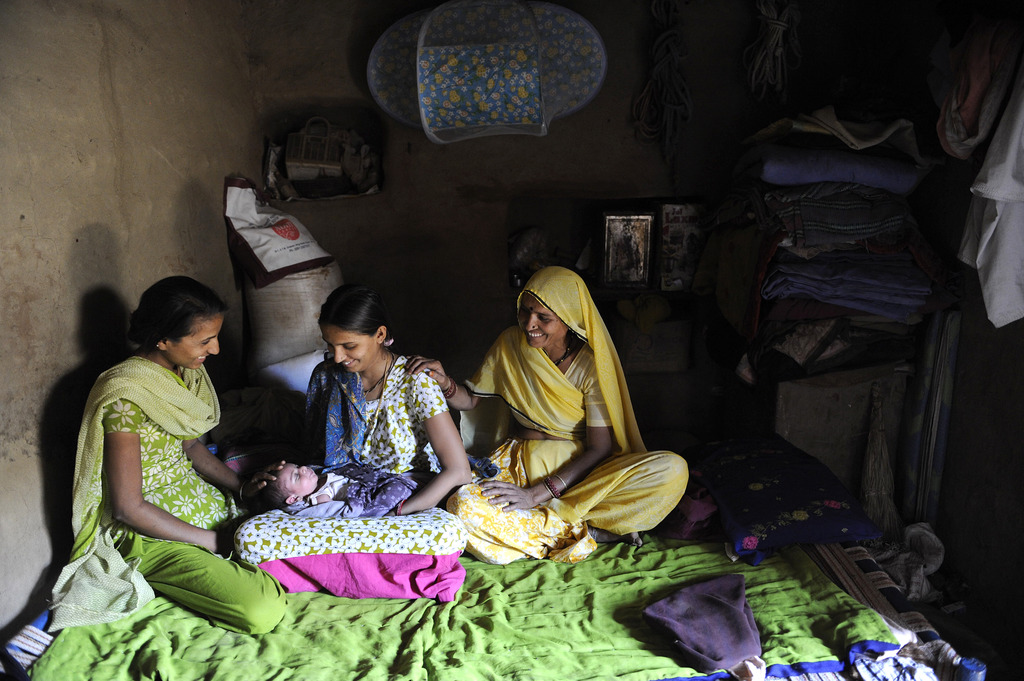 Thank you for your continued support to our project 'Immunization for Tribal Children and Young Mothers'.

With your support we are about to begin a new year and are excited about the hopes and challenges it will bring. And at this yearend, we would like to share our progress report of this project from april to September 2013 so that you come to know how exactly YOUR support is creating real change. Below is the snapshot of the progress report:

Immunization camps are organized by Seva Mandir in 110 hamlets across the five blocks. During the reporting period, 633 camps were conducted against the target of 662 camps, which means 96 per cent of camps were held. This is an improvement over the 90 per cent in the last year (April – Sep 12). There is also a slight increase in the number of children receiving vaccination, against 610 children of the previous year, 686 children were immunized this year of which 375 were boys and 311 were girls. 337 children completed their immunization schedule of which 194 were boys and 143 were girls. 1451 children, of whom 804 boys and 647 girls, were given medicines for common illnesses in which the maximum number of children came with the complaint of diarrhea followed by skin infection and fever. The absence of nurses and problems in reaching the camp site during monsoons has been the major reason behind the cancellation of the camps.

The camps also registered 894 women for antenatal checkups against 905 women in last reporting period. Of these total registered women, 796 received one dose of tetanus toxoid vaccine and 697 women received both the doses. 362 women visited the camps for their third ante natal checkup which is indicative of a positive shift in the behavior of the women towards their personal health during pregnancy. The components of antenatal checkups included hemoglobin test, urine test, blood pressure measure and counseling on care during pregnancy.

Savita Devi, a resident of Hasreta village in Kotra block was reluctant in getting her daughter Laxmi immunized as she believed the vaccines to be harmful which would lead to her child to become handicapped. The Bal Sakhi (Child Caretaker from Seva Mandir) Manju counseled her to visit the camp once where she would be able to interact with the mothers of her own age group. On visiting the camp, Savita Devi witnessed the ease with which the other children were getting the vaccination and also got an opportunity to hear about the positive personal experiences of the mothers. The women from Seva Mandir counseled Savita about the benefits of immunization and cleared her misconceptions regarding the vaccines which instilled confidence in her and she agreed to get her daughter immunized. Individual counseling by the nursing team and the community health workers is the backbone of the program as the women have a number of misconceptions regarding immunization due to which they neither get themselves or their children immunized which can pose a serious threat to the health and wellbeing of the pregnant women and children.

Once again thank you so much for your continued support.

Your Contribution is Creating Changes.. Thanks Hope you are well. I like to introduce myself to you. I am Atul Lekhra. I have joined Seva Mandir early this year and I will now be communicating with you through these project reports. I am glad to be a part of this program and look forward to talking to you about all these wonderful projects you are supporting.

Today I want to share with you two stories, one of Gita Bai of Bhichiwada village and another is of Laxmi Devi from Bhilwara village.

Immunization camps are organized regularly on the 4th of every month in the Bichiwada village. Gita Bai is a regular visitor to these camps as she has three children who are receiving vaccination. She has 5 month old twins for whom she has not missed any vaccine shot. She is very happy that immunization team comes to her village regularly and she can get her children treated at these camps without worrying about travelling to PHC which is a very difficult task. She tells about her last visit to camp where her son got treated for diarrhea. She also feels good that they are provided with lentil by Seva Mandir after every vaccine shot to her child.

This case of Gita Bai highlights the key role played by camps in providing basic healthcare for children for these inaccessible areas of Udaipur district.

On 2nd day of every month immunization camp is organized at Bhilwada village. Laxmi devi, a 35 yrs old woman of Bhilwada agreed to visit this camp after a lot of counseling by TBA (trained birth attendant of Seva Mandir). She had heard about vaccination for children but was not aware about need of vaccination in pregnancy. Initially she was not agreeing for TT shot but after lot of explanation by health workers at camp and also after observing that many of other pregnant women of her village are also taking it, she understood its importance and happily agreed for it.

She also underwent ANC check up including Hb, BP etc. she was found to be underweight and was counseled about the diet she should take during her pregnancy. So these camps are not only providing immunization for children but are also very important centers of ANC check up. These camps are creating general awareness among rural and illiterate people about health and clearing their misconceptions.

Much of this success is also due to your untiring support. It is a great partnership and we hope to continue having you by our side. We really appreciate the trust you have shown in us. Please do let us know if you have any questions.

You can help us save even more lives 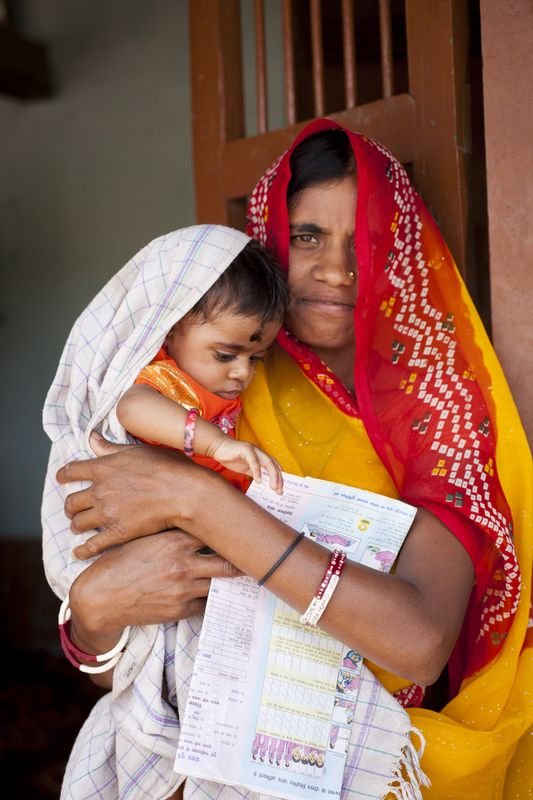