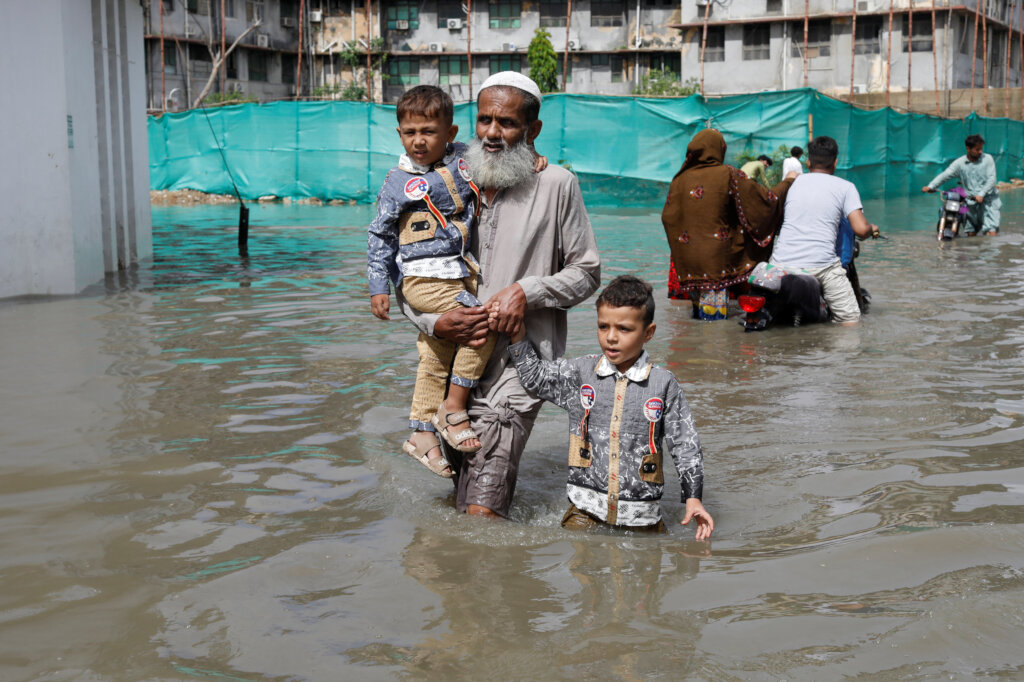 What's Happening and How to Help

We believe that organizations that are deeply rooted in local communities are in the best position to provide long-term support for survivors of natural disasters like these. By funding the relief efforts of local organizations, donations to this fund have the potential to build stronger response capacity so that these organizations are better equipped to face future challenges.

The projects listed below are led by vetted GlobalGiving partners responding to this disaster. You can donate directly to a specific project or to GlobalGiving’s Pakistan Flood Relief Fund and we'll allocate it to where it's needed most. GlobalGiving will post reports about how your donation has been put to use. 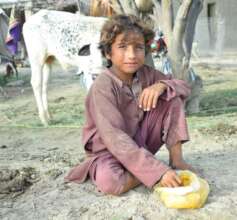 Urgent Relief Fund for Flood Victims in Pakistan
by Al-Mustafa Welfare Society
This year it rained 500% more since the last 30 years, piling miseries in Balochistan and Sindh, with the death toll rising every day. These massive rains have hit areas with the highest poverty rates in the country, washing away entire homes, roads, and bridges. Al-Mustafa is rescuing the victims trapped in water & supporting them with tents, food, ration, safe water, medical aid, passenger boats, etc. Your donation will help us to save and rehabilitate thousands of families stuck in the water. 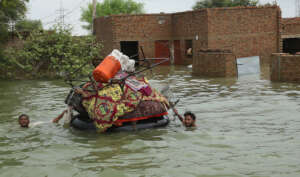 Flood-affected Pakistani families call for help
by Sustainable Development Association (SDA)
This project will provide food for one month to 1,000 flood-affected displaced families and financial assistance in building their homes. Heavy rains have triggered flash floods and wreaked havoc across much of Pakistan leaving 903 dead 184,000 displaced to relief camps and about 50,000 people homelessly. Their livestock and crops are wiped out and they are seeking help to survive. Lets help the displaced families of Tehsil Rojhan of district Rajanpur who are affected the most worst. 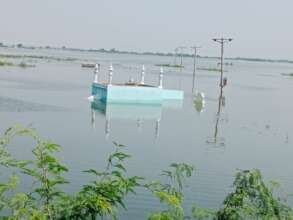 Pakistan floods 2022 Emergency Food & Shelter
by Association for Humanitarian Development (AHD)
Since June 2022, floods in Pakistan have affected over 33 million people and killed over 1,500 people, it is described as the worst flood disaster in country's history. The victims in this situation are facing various difficulties; most of the people have lost their homes, crops and livestock and are in urgent need for shelter, food, temporary tents. Your donation to Association for Humanitarian Development (AHD) will provide Emergency Support for the Floods 2022 in Pakistan.

Pakistan - provision of safe water
by Rotary Club of Chelwood Bridge
We are arranging to send up to 500 of our Water Survival Boxes to Pakistan and these will be distributed by our well-established NGO partners in country. 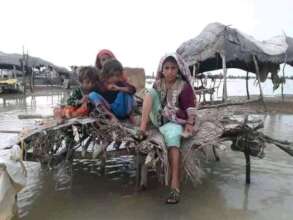 Pakistan Flood Relief
by Dawood Global Foundation - Educate a Girl
Pakistan is the midst of devastating floods in Baluchistan, Punjab, SWAT and Sindh, with horrific impact. More than 33 million people are displaced and without home, over 1,000 have been killed, more than 500,000 houses destroyed and close to 1 billion livestock deaths. This project is to give food rations and medicines to those most suffering.

Relief/Recovery for flood affected in Pakistan
by Association For Women's Awareness and Rural Development
Millions of people have been affected and are highly vulnerable by severe flooding in Southern and northern part of Pakistan. Recent heavy rains in Sindh,KPK and Punjab have killed thousands of people due to urban flooding and have swept away livestock, properties and valuables of worth billion of Rupees. Donations will provide immediate relief to survivors in form of supplies(food, shelter, water, and medicine) in addition to long-term recovery assistance to help residents recover and rebuild. 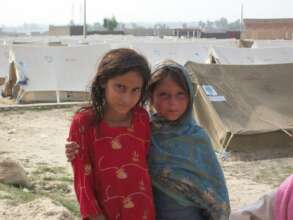 Pakistan Flood Emergency Supplies, and Shelter
by Disaster Aid USA Inc.
Disaster Aid USA has worked in Pakistan previously including the 2010 floods. We have many trusted contacts on the ground, including village and district leaders to local Rotary clubs. We are getting pictures and video in daily of the needs in their area. Real time info. We will first buy what supplies we can in Pakistan and transport to the affect area. Supplies not found locally will be sourced through our network of suppliers and shipped in quickly.

Responding to Floods in Pakistan
by International Medical Corps
Extreme monsoon rains have triggered floods and landslides across much of Pakistan over the past weeks, leading to widespread loss of life, livelihoods and infrastructure. According to the United Nations, the floods have affected 33 million people in Pakistan and 6.4 million need assistance. International Medical Corps is responding by providing the health services, medicines and supplies devastated communities need to get back on their feet.

Donate for Pool Fund for Rain Emergency in Sindh
by National Disability & Development Forum (NDF)
Sindh Province of Pakistan deadly affected during monsoon seasons, people suffer lot during rain emergencies. Due to climate change recent monsoon season in Sindh August 2022, heavy rains destroyed 1000s of villages in Sindh. 1000s people lost their crops, houses, cattle & other livelihood resources. During these days rapid response is required to intervene in food supply, temporary shelters, NFIs so that NDF needs to establish the Pool Fund for Rain Emergency in Sindh to help at urgent base 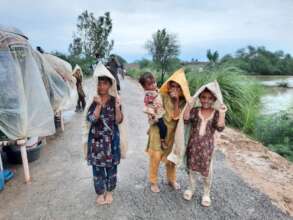 REACHING FLOOD AFFECTED CHILDREN IN PAKISTAN
by Alif Laila Book Bus Society
Pakistan has seen the worst flood in country's history killing over 1,136 causing catastrophic destruction because of heavier than usual monsoon rains and melting glaciers. Millions have been displaced, losing their life stock, land, crops, and homes. It has been categorized as the world's deadliest floods since 2017 South Asian floods leaving the people and children in dire need of humanitarian and medical support. 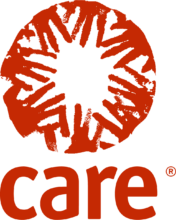 Pakistan Emergency - Catastrophic Floods
by CARE
Catastrophic floods in Pakistan, affecting over 30 million people, have killed more than 900 people in the past few weeks, and the situation continues to deteriorate, with continued heavy rains causing flooding and landslides. The sheer scale of the disaster has led the Government of Pakistan to declare a National Emergency. CARE International in Pakistan, and its implementing partners, are distributing relief items to affected communities including tents, emergency latrine kits, etc. 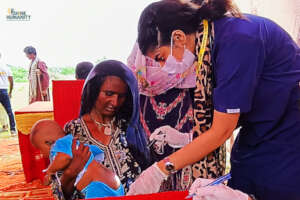 Medical Relief for Flood Affectees In Pakistan
by SHINE Humanity
The severity of floods rains in Pakistan has left millions without homes, food or medical support. To play our part in the relief efforts, SHINE Humanity is arranging medical relief camps in Sindh province, for the flood-affected population. Through these medical interventions, we will be providing consultations, medicines and water purification tablets. 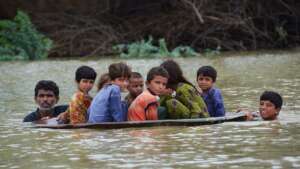 Pakistan Floods 2022: Relief & Rehabilitation
by Fatima Memorial Hospital
Pakistan Floods 2022: an unprecedented natural disaster. Over 30 million people affected. Everything is gone; no shelter, no food, no crops. Outbreak of disease threatens not only health of flood affectees but also livelihoods. Income shocks from damage to crops and cattle, as well as health emergencies, can push entire households into starvation. Fatima Memorial Hospital in collaboration with Nur Foundation is providing relief in the areas of South Punjab and Khyber Pakhtunkhwa. 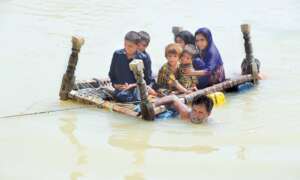 Lets Help to Flood Effected People in Balochistan
by Balochistan Rural Development Program (BRDP)
The recent flood widespread destruction, National Disaster Management Authority reported that the floods have resulted in more than 1100 deaths and 1600 people have been injured. More than 325000 households destroyed, 733000 damaged, 735000 Livestock effected, 2 Million Acres of Crops affected in Pakistan of which 60% are in Balochistan. More than 600 Schools damaged in Balochistan only. 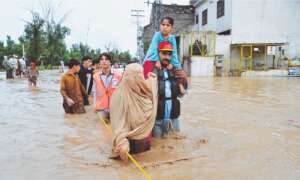 ABKT's Flood Relief Initiative in Pakistan
by Association for Behavior and Knowledge Transformation (ABKT)
Over the last two weeks, the humanitarian situation in Pakistan has deteriorated as torrential rains have continued to create flooding and landslides, resulting in displacement and damage across the nation. The Government of Pakistan has officially recognised 66 districts as "calamity affected,". We need your urgent support to act immediately & help our people with relief efforts as Pakistan is struggling to handle the repercussion of severe rains that have caused massive floods. 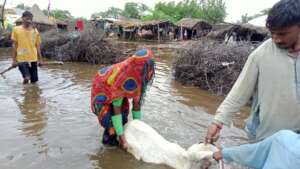 Flood Affectees in Sindh-2022
by Primary Education Project
More than 1000 people have lost their lives whereas 365 just died in Sindh and millions have lost their houses. according to surveys 130 districts of Pakistan are affected by these floods. Primary Education Project Diocese of Hyderabad has identified 3500 families whose children are in 104 schools. PEP-DoH has raised 2500 packages having food and non-food items. PEP-DoH would like to submit 1000 more packages for these families from our global giving family. 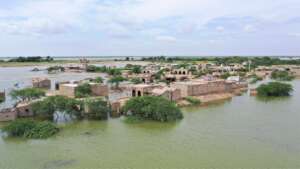 Pakistan Flood Appeal 2022
by Fast Rural Development Program
Over 4.2 million people have been affected by torrential rains and flash floods in all provinces of Pakistan. More than 1200 people have lost their lives with Balochistan having the highest toll of 234. Almost 4,800 people have been injured and about 736,000 houses have been damaged. 3,082 kilometers of roads and 145 bridges are destroyed. The loss of livestock has been estimated up to 793,995. 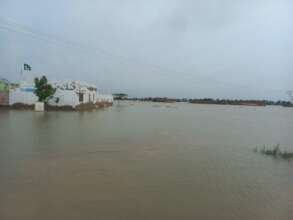 One Dollar Appeal for Flood 2022 Affected Families
by Advocacy, Research, Training and Services (ARTS) Foundation
The aim of collecting one dollar is to minimize sufferings of flood affected 1,161,392 men, women and children of those families who lost their 282,533 houses either fully or partially and living in self made tents on road sides in district Mirpurkhas of Sindh province of Pakistan. Your 1 dollar donation will make enable us to respond their urgent humanitarian emergency needs like cooked/dry food items, clean drinking water, hygiene/sanitary items, mosquito nets, temporary shelter/latrine.

GlobalGiving
Guarantee
Donate https://www.globalgiving.org/dy/cart/view/gg.html?cmd=addItem&projid=56959&rf=microdata&frequency=ONCE&amount=25
Please Note
WARNING: Javascript is currently disabled or is not available in your browser. GlobalGiving makes extensive use of Javascript and will not function properly with Javascript disabled. Please enable Javascript and refresh this page.