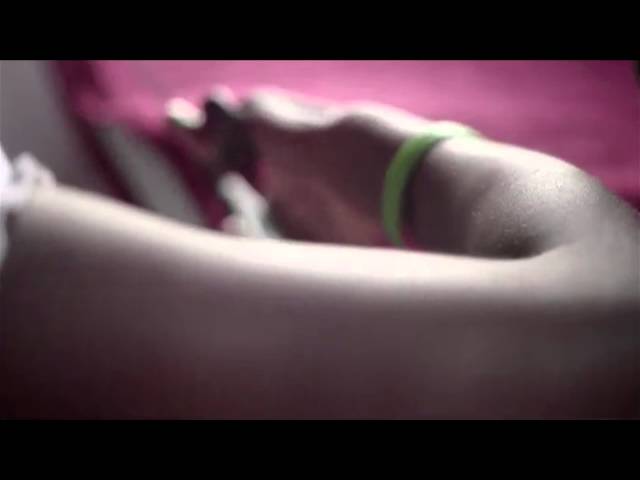 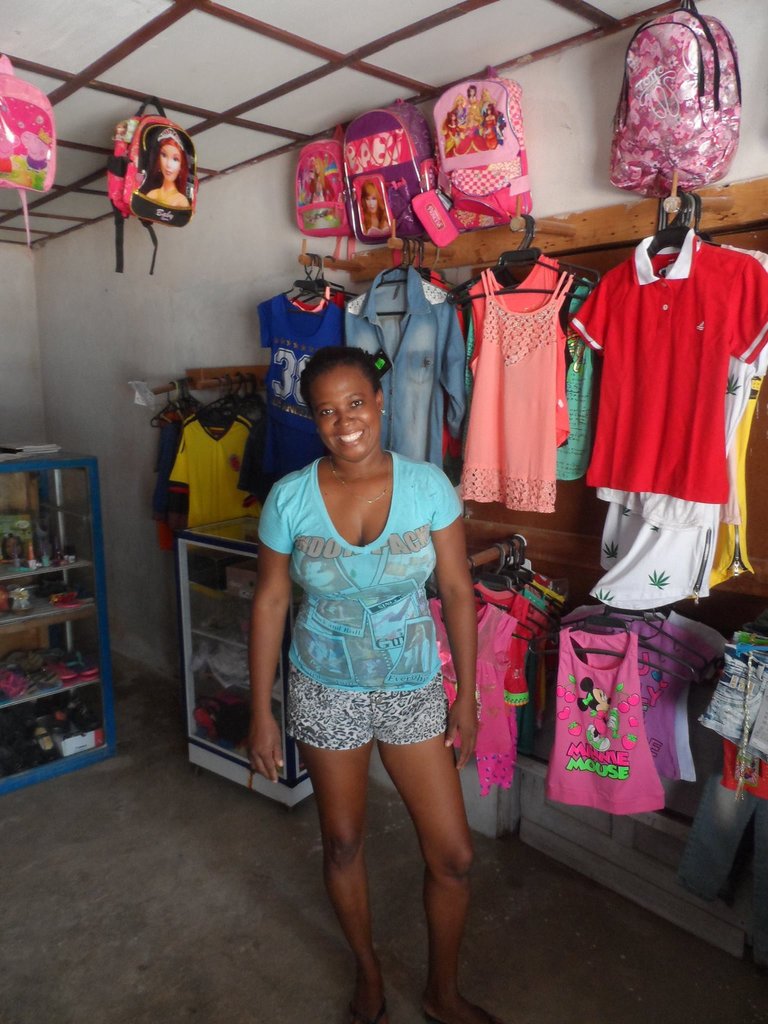 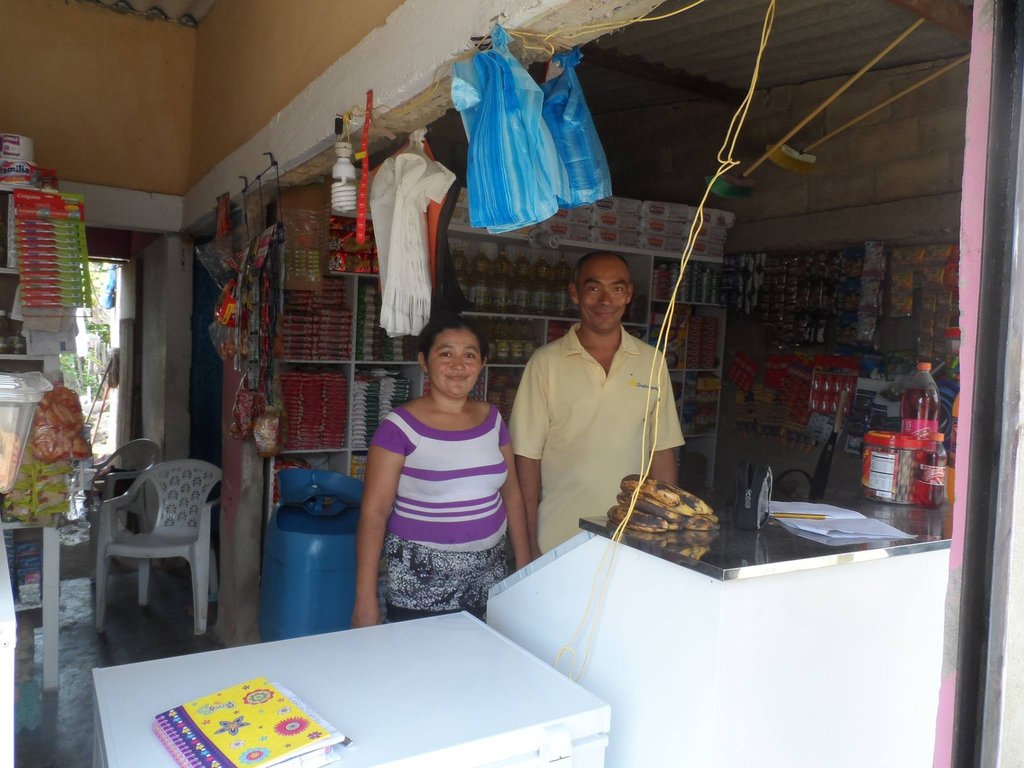 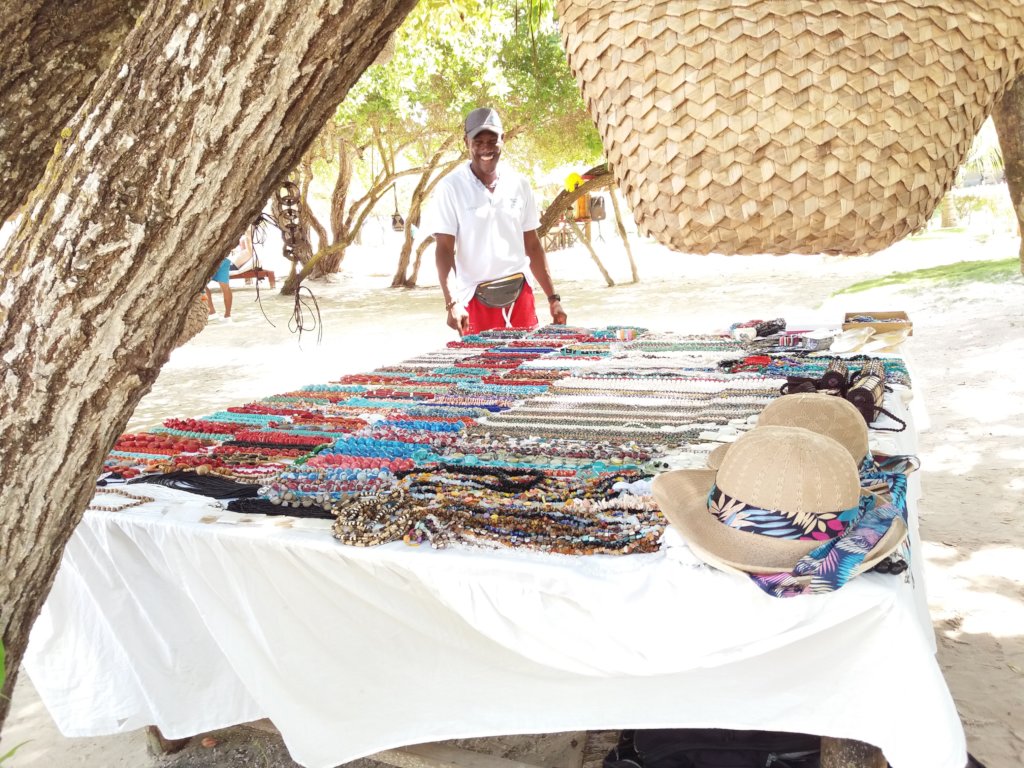 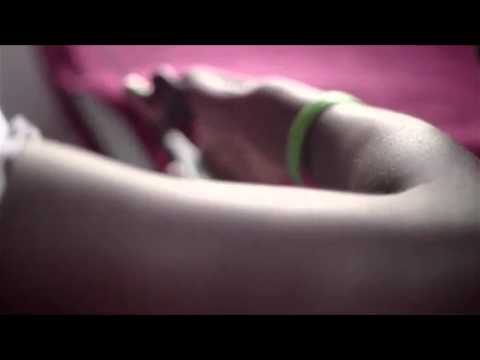 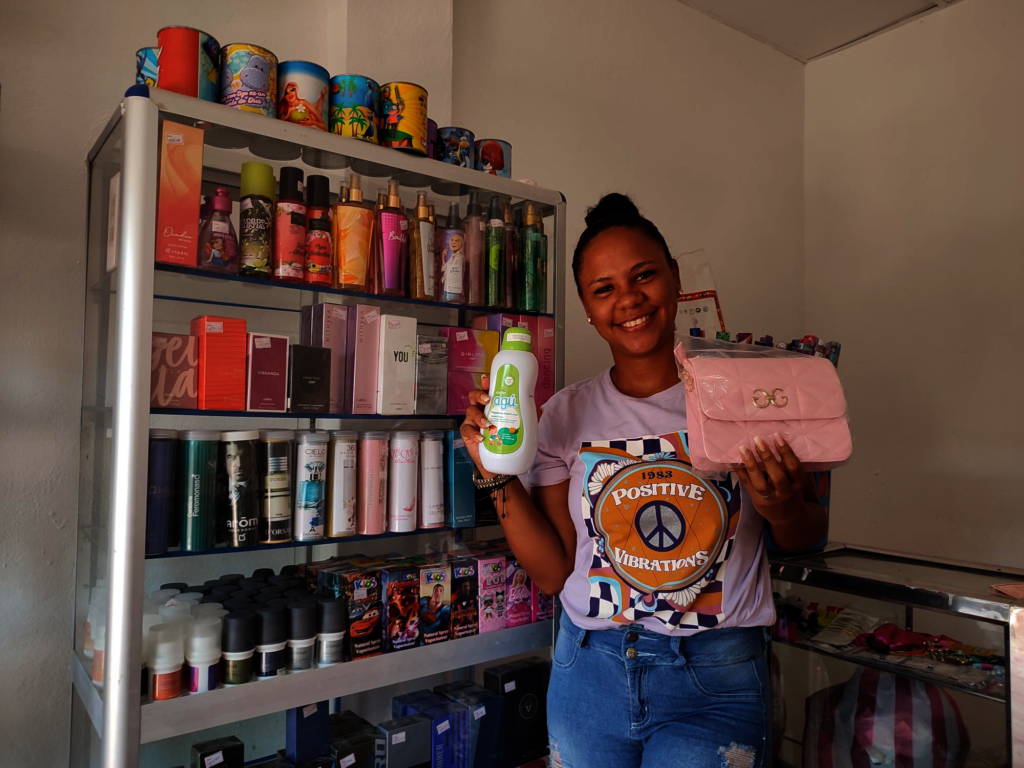 Rosy is a young woman from Baru, a Psychologist, who decided to start a business so that she could improve her income and achieve her economic independence.

Two years ago, when the pandemic started, people were afraid to go to the city, so she took a risk and found a way to bring personal hygiene and beauty products to sell in Barú. She started with a showcase on the terrace of her house.

“Before Covid - 19, I had applied for a job, but that didn´t happen. So, I said to myself, let's move! 2021, was a good year, because, thanks to the profits that the business had left me, I bought 2 more showcases and started selling products by catalog, added shoes, bags and sheets to my products. 2022, has been even better, although it has only been 5 months. Why? Easy, because I already have my own place”, says Rosy excited.

Thanks to the support she receives from her husband, who has been unconditional from day one, this year she wants to concentrate in adding more furniture to her store, since he is a talented carpenter.

At the end of our talk, Rosy highlighted “my business is a goal in my life project. Therefore, I am always thinking about how to maintain it. I have learned to identify the best sale and advertising strategies. I have been using social media to promote it. Definitely, my business means growth to me!” 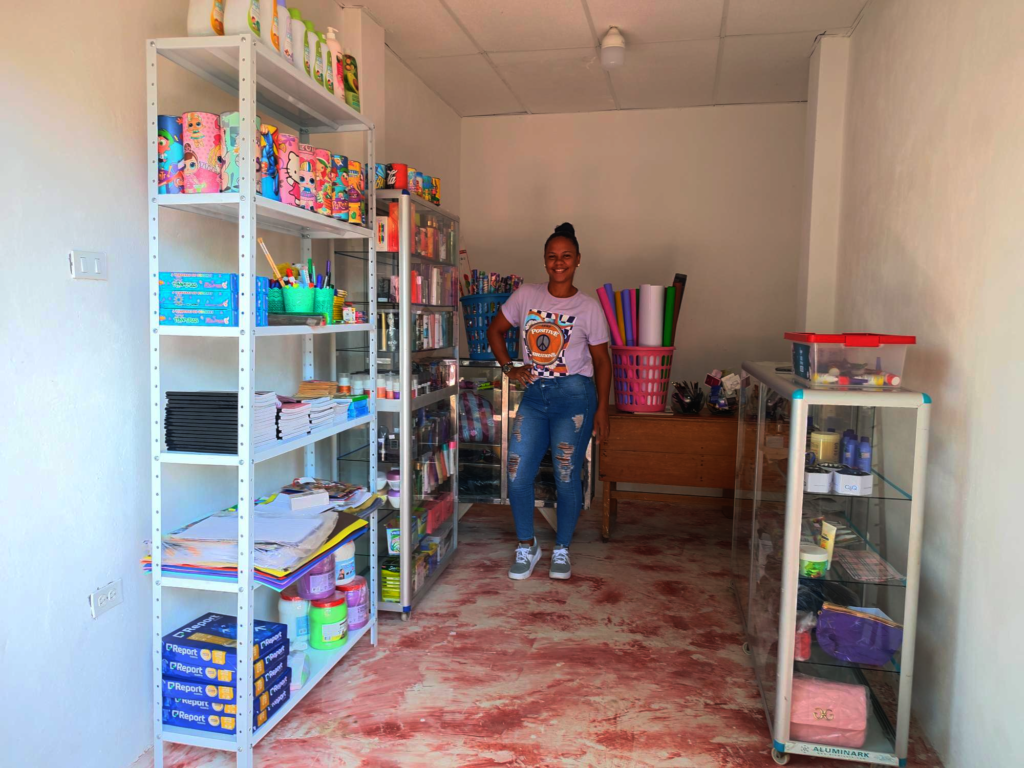 About the year 2021 to the local entrepreneurs 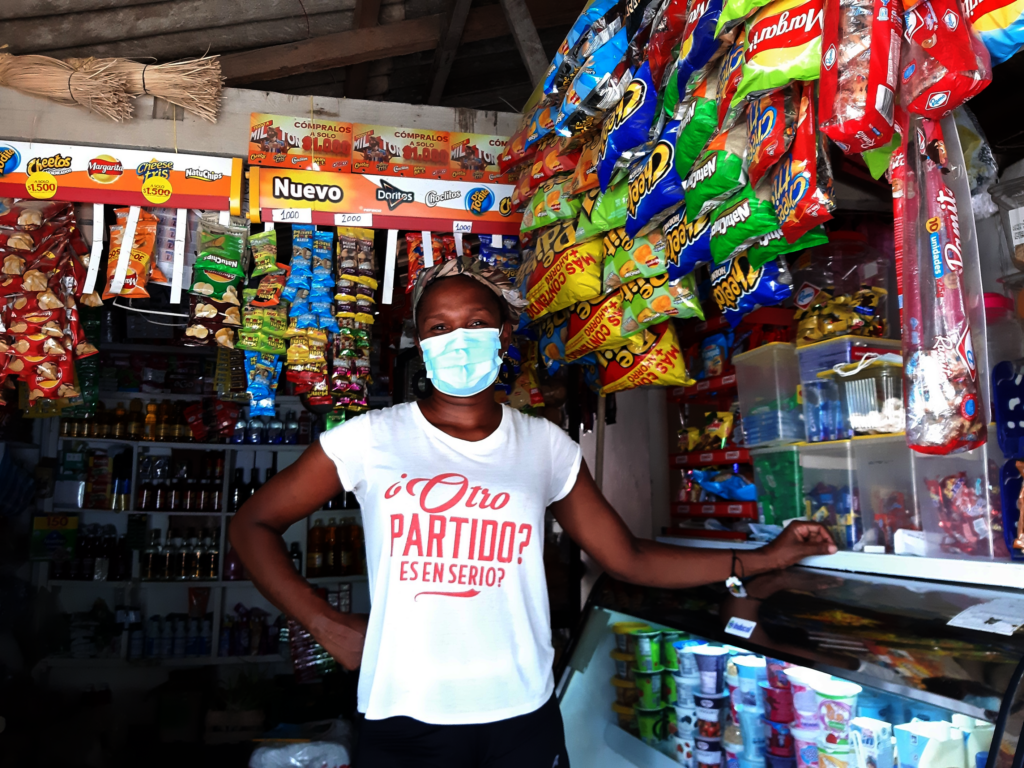 ¡2021 was a great challenge for the Baru Island entrepreneurs!

In January, February and March 2021, they began to adapt to a new way of living: "At that time, everyone just talked about biosecurity protocols, social distancing, hand disinfection and the use of face masks, to be able to do basic activities, such as coming to the store for bread", says Yoleida, one of the project’s participants.

It was like living in an alternate reality. However, every business started to adapt and at the end of March and during April, there was hope again among the community. According to the local media, 29 hotels in the insular zone of Cartagena (including Baru) had reactivated and this immediately reflected in the local economy of the island.

Then, between May and June, the third peak of the pandemic was declared by the Colombian Ministry of Health, to reduce the speed and number of infections. This, without a doubt, was a small setback for the local businesses.

Fortunately in July, the long-awaited vaccine arrived to revive hope, and although at first there was a bit of resistance and many myths surrounding it, the community started believing in the vaccine’s benefits.

According to the Cartagena District Health Administrative Department reports, in August 2021, 100% of the population over 18 years in Baru was vaccinated.

Between September and November, despite the threat of a fourth peak of infections, the reactivation was complete, so when December arrived, the island received hundreds of tourists, and business profits went from 10% to 30% and 40%.

Baru island entrepreneurs (example of strength and resilience) are confident that the local economy will be strengthened, as they all went back to work on their businesses. 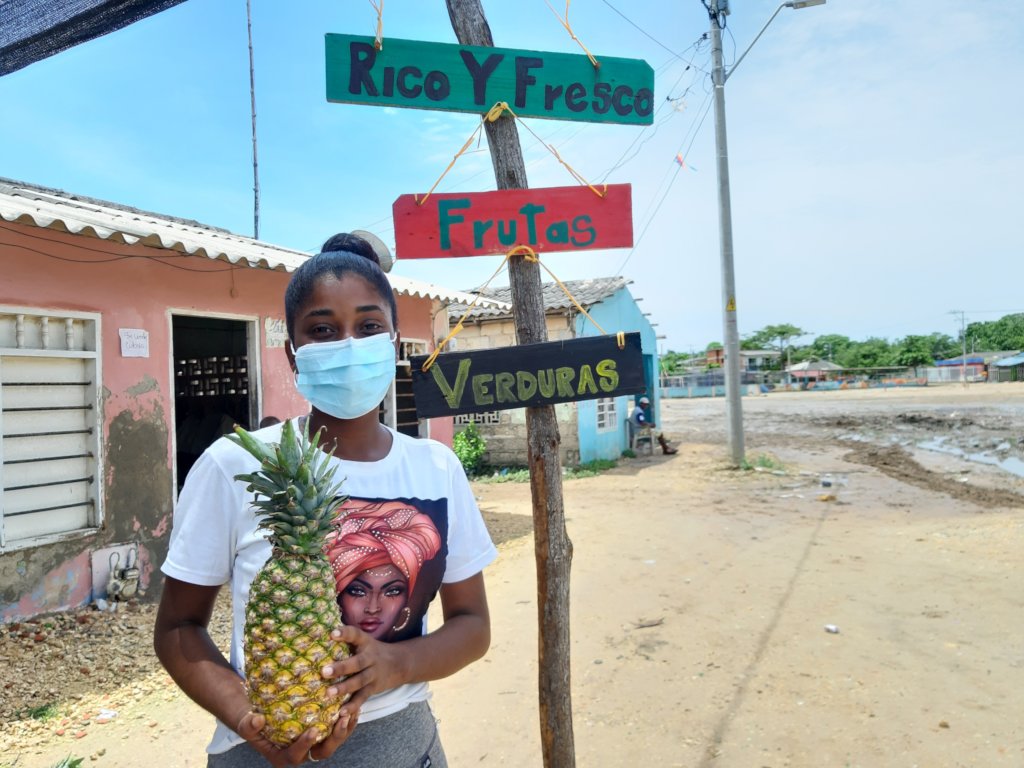 Zulimar was born in a family of entrepreneurs. Her father owns a hardware store, her mother a grocery store, and her older sister sells clothes and shoes. They inspired her to be independent and two years ago she started her business:

“I realized that the owners of the grocery stores in Baru had to go several times a week to Cartagena to buy fruits, vegetables and meats, and there I saw an opportunity. This is why, I visited each one of them and proposed to bring the fruits and vegetables they needed to their stores, saving them the trouble of having to spend at least half a day going to the city to shop. This is how “Rico y fresco” (Delicious and fresh) was born.

I started by selling fruits and vegetables, and then I included beef, pork, and chicken, so I had to purchase a freezer to maintain the cold chain and preserve the food. In a few months I expanded my services to the Rosario Islands and began to handle a lot of inventory, so recently I rented a place to store all the orders, but also to sell to the final consumer in Baru who need to buy fruits, vegetables and meat to prepare their meals.

I see myself in the future as a great merchant. I want to do things better every day, and that is why I have started to organize the accounting of my business, keeping a daily log of expenses and sales, to be clear about my profit”, concluded Zulimar. 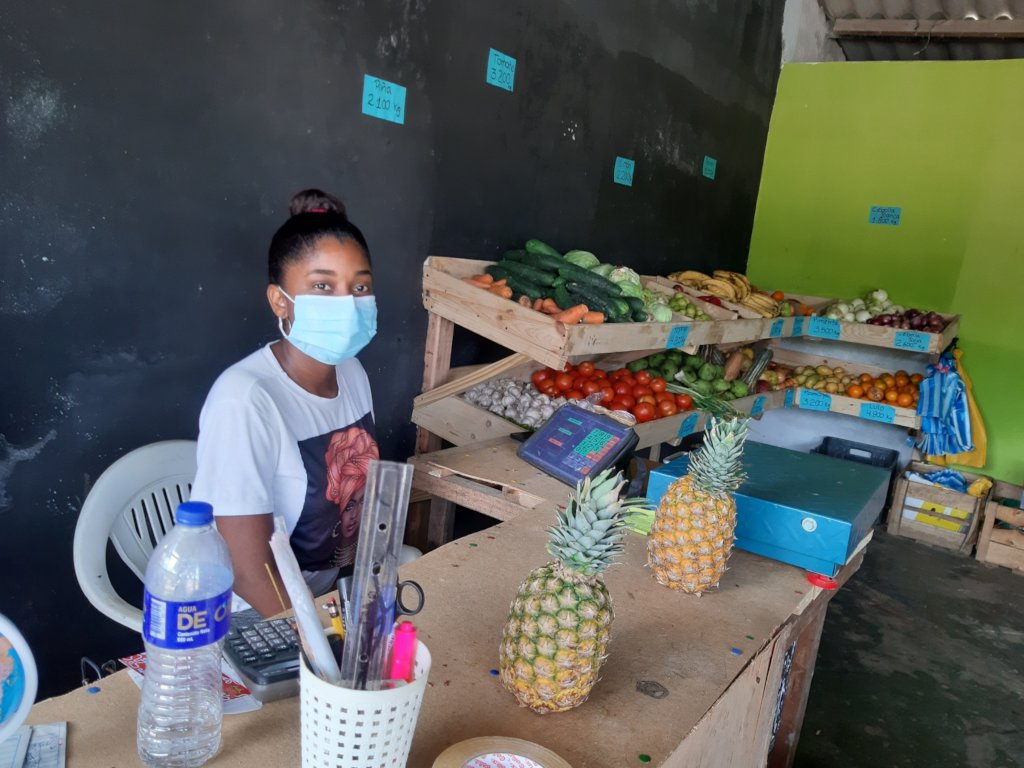 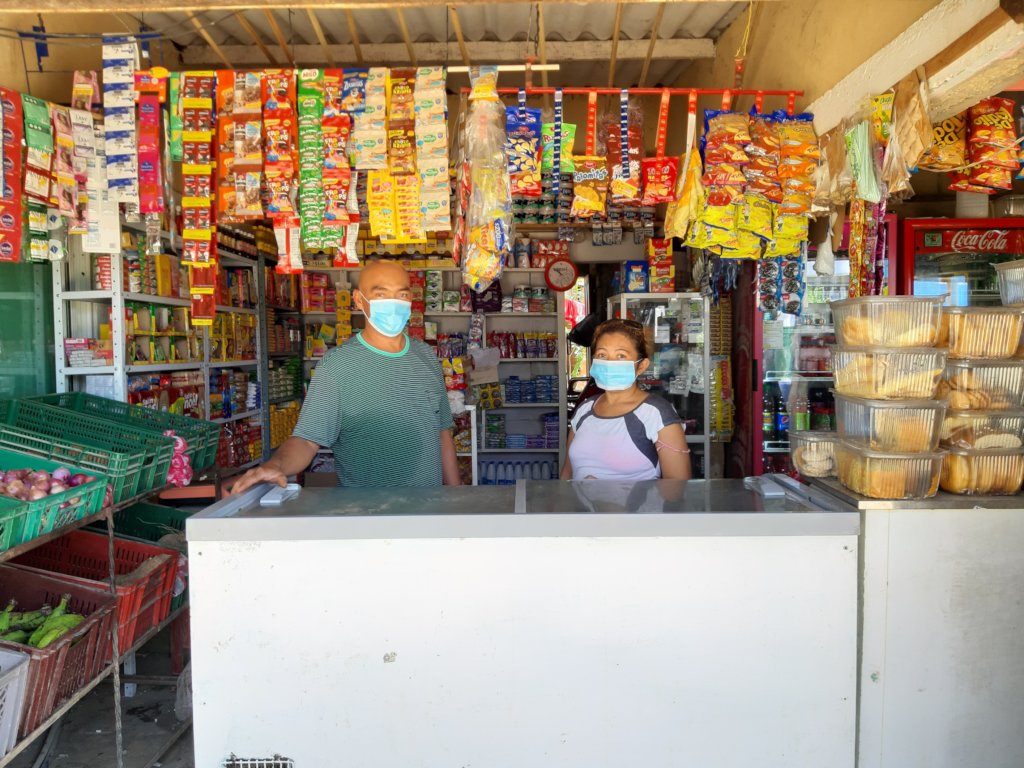 Martha and Roger in their grocery store

Martha and Roger are married and they are partners in their grocery store called "The mustard seed."

“They say that the fifth year is the crucial year for a business and they say so, for a good reason! " declares Martha.

It was the year 2019. The year in which their store would reach its fifth anniversary, when a wave of family events took place and made Martha and Roger almost abandoned their business.

"We got very demotivated, lost interest and the necessary strength to continue, so we made the worst decision of our lives without knowing it: we rented the business, including all our inventory. We signed a one-year contract, and to summarize what we went through, during that time, they only paid us 2 months of rent, sold all the inventory and only occasionally stocked the business but with bad products, which made our customers leave" Martha relates, with obvious disappointment on her face.

“After several months of dispute that included lawyers, at the end of 2020, we got our store back. It hasn´t been easy, but we understood that our business is like a son to us and it is our duty to make it grow and prosper as strong as the tree that the little mustard seed becomes. That is why we currently sell more than 200 products and included new ones, according to what our customers need. We included the service of money orders, thanks to an agreement we made with a collection company. We came back stronger than ever, with a great lesson learned: not to give up despite the obstacles", Martha concludes while she gratefully welcomes her customers. 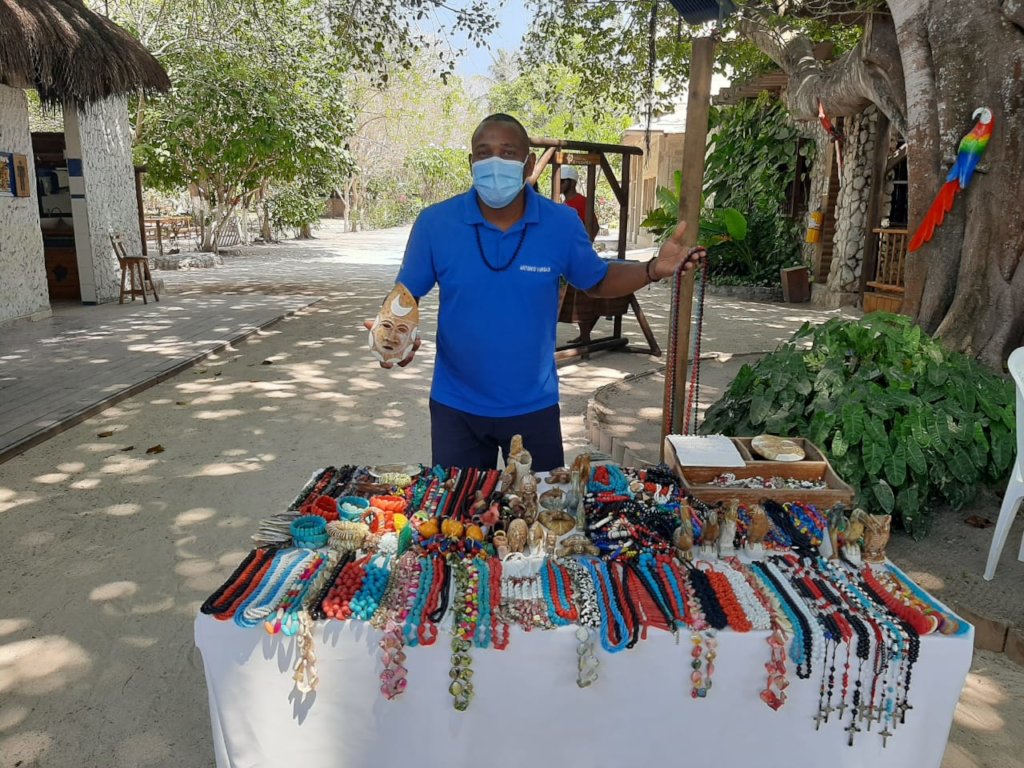 Antonio, back on business

In March 2020, because of the global pandemic due to COVID-19, the entire tourism sector in Colombia, including islanders, suspended their activities and services.

Shops, hotels and restaurants were temporarily closed, affecting owners, employees and independent workers such as Antonio, an artisan by vocation, who for more than 15 years has sold his handicrafts inside the hotels of Baru.

“In December 2020, after 9 months of crisis and desperation, the hotels began to open and their owners called us again to start selling our products as before. But first, they trained us in biosafety protocols, and they gave us face masks and alcohol to disinfect our products and tables”, says Antonio.

“At the end of December 2020 when I served my first client, it felt like me again; I felt as if my soul returned to my body and for a moment, it felt as if everything was just like before the pandemic. My family and I prayed a lot for this moment to come, we never lost faith and we knew that sooner rather than later, I would go back to work”.

“Sales are still far from being the same, but every day is better and I am convinced that as long as we all follow the protocols, we can control the virus. Every day we take one more step to defeat it. Thanks to the arrival of vaccines in our country, in the name of God, from now on, everything will be better”, points out Antonio.