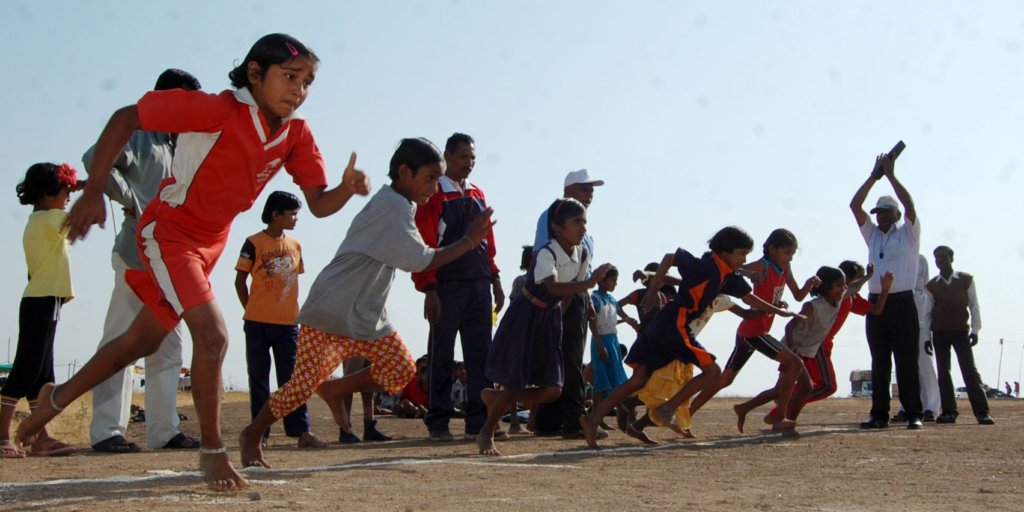 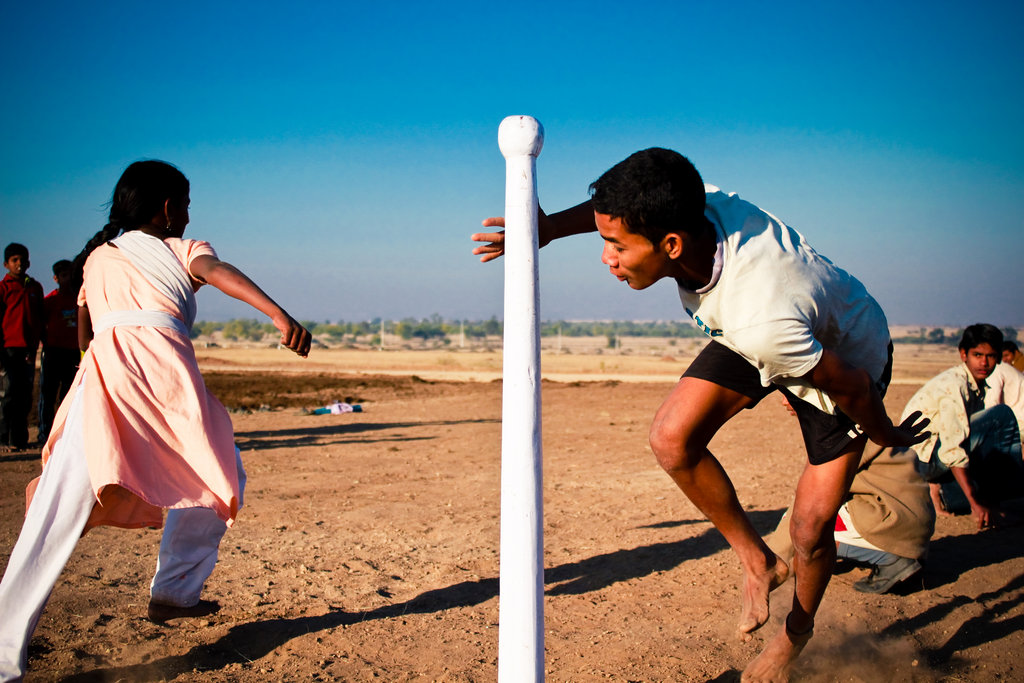 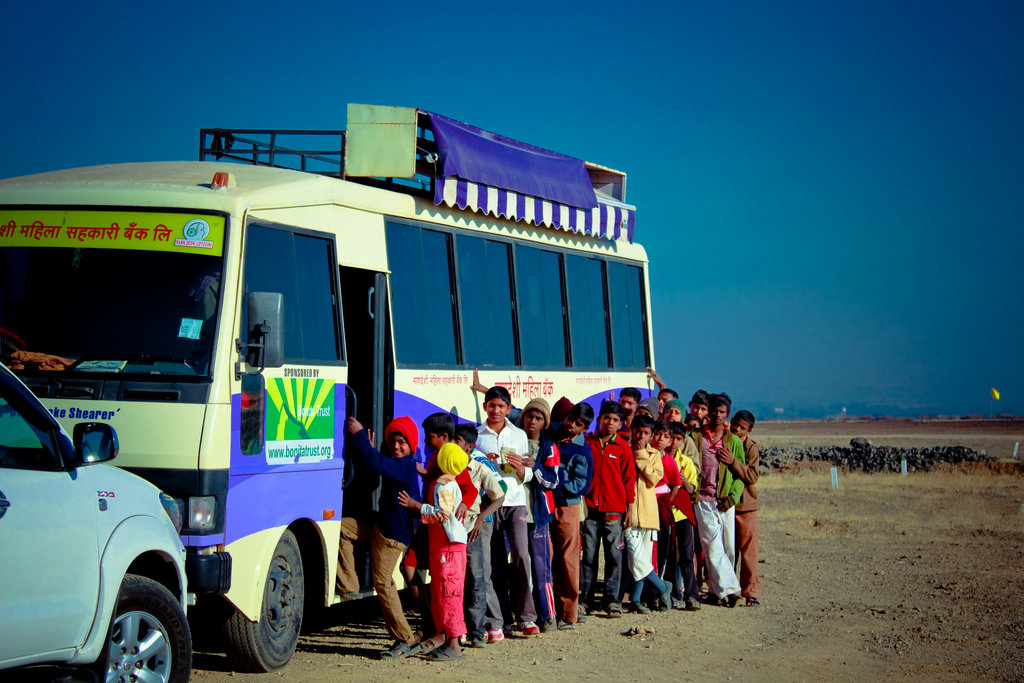 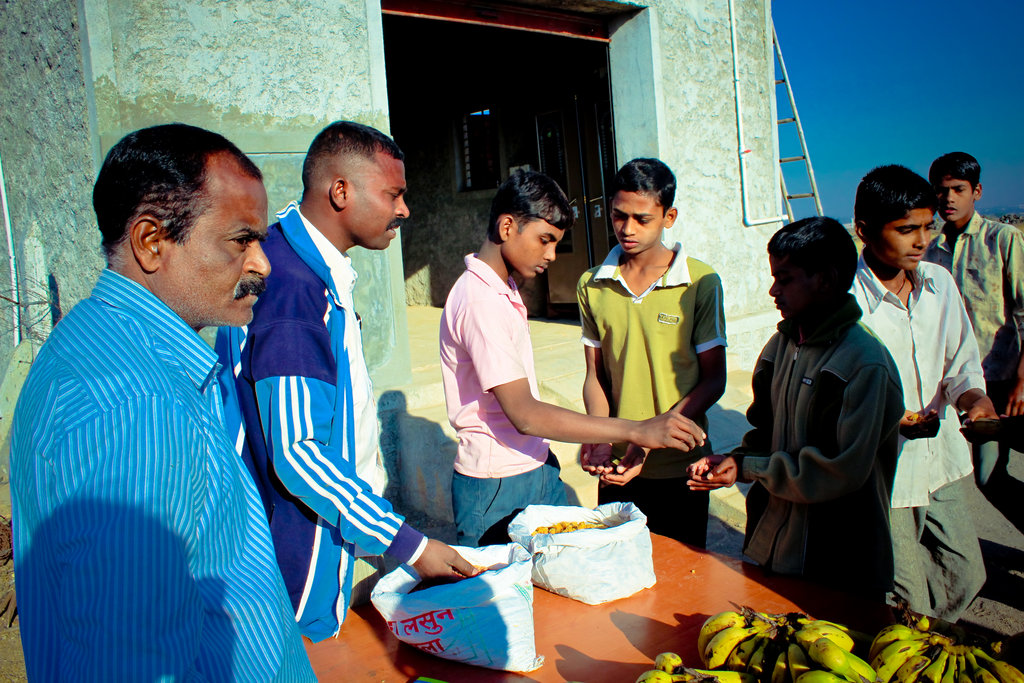 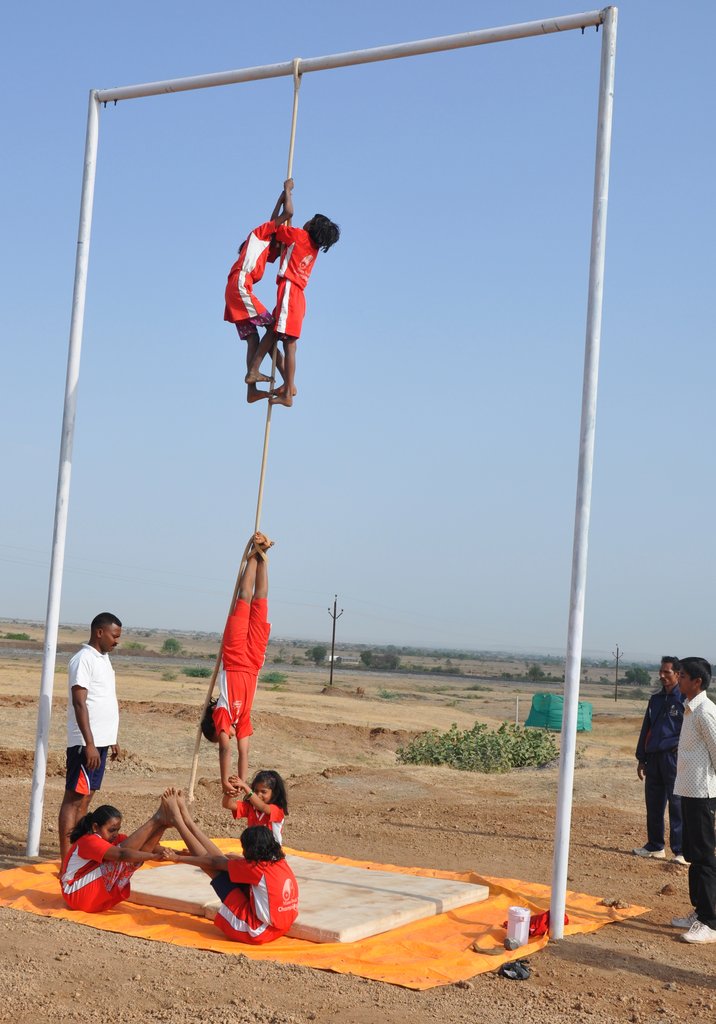 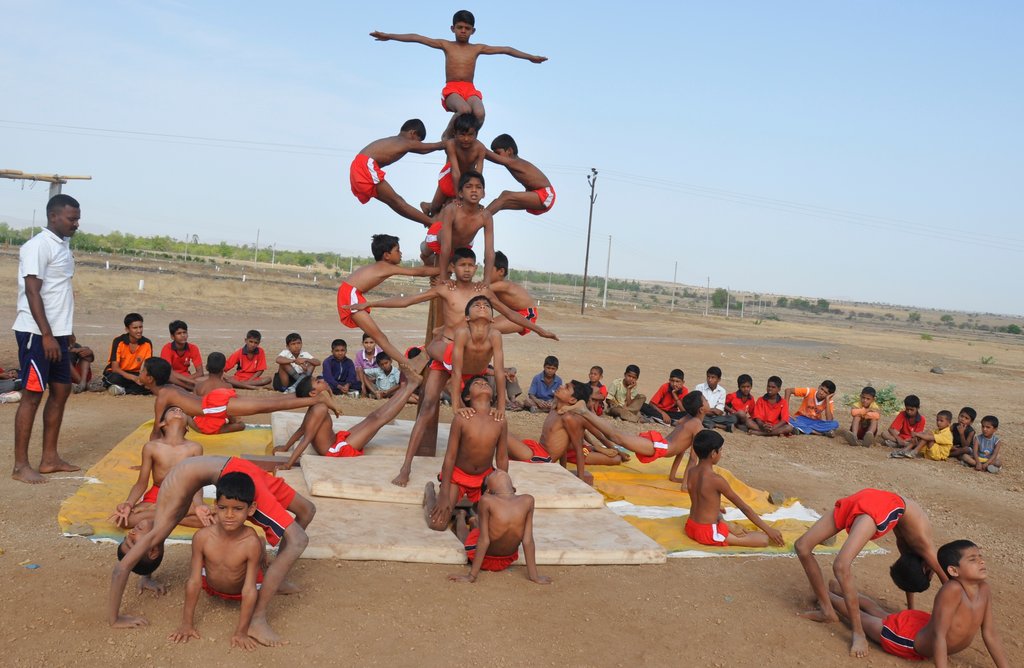 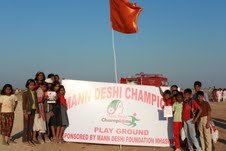 Reacting to the needs of rural children, who live in families with low income, Mann Deshi Foundation launched a sports program in December, 2010, called ‘Mann Deshi Champions’.  Over 5000 children registered and benefited from this program.

The goals of this program are multifold. In general, poor children in India will not have access to any sports training due to lack of finance and availability of facilities in rural places. As this program is free of charge, lack of finance will no longer be a hindrance for the children. Mann Deshi provides the land with the facilities and organizes teachers, who trains the children in various disciplines such as football, volleyball, running, badminton, long jumping, and various other fun games to increase overall fitness.

A free bus service is organized to bring children from the town and the surrounding villages to the training field.

Skill development. Children quickly acquire physical, but also social skills, as they learn to form a team, interact with other team members, submitting to rules, set ambiguous targets and fight to achieve them – all while having fun with their friends from school.

Clothing. Most children do not own shoes or sport outfits, therefore Mann Deshi provides sport shoes and clothes for all children who regularly attend the training sessions.

Medical treatment. In addition, each child receives a regular, basic medical examination (a problem often faced is worms, therefore de-worming is a critical treatment Mann Deshi offers in order to prevent the children from loosing nutrients and energy).

Meals. In order to supplement the often insufficient meals the children receive at home, each child is provided with a nutritious meal after the sports session, usually containing fruits, nuts and jaggery.

On behalf of Mann Deshi Thank you to Global Giving & donors for donation & helping make a different in the lives of children. 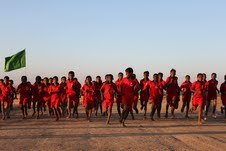 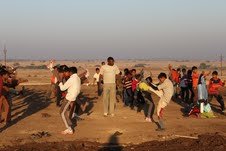 It is our pleasure to share that 28 young athletes between 8 and 12, issued from the Mann Deshi Champions program, were chosen to for the Balewadi national sports school, this selection was national level selection, from Maharashtra 270 were selected out of that 28 were selected from Mann Taluka alone. These kids were getting training and coaching and guidance at Mann deshi champions ground. I would like to take this opportunity to tell you the story of Kajal, one of the girls selected from our program. She is only ten years old, but runs 800 meters in less than two minutes and thirty seconds.

Kajal comes from a very poor family.  For six months out of the year, she lives and goes to school in Mhaswad, but for the six remaining months, she migrates with her parents to the sugarcane plantations six hours away. While her parents work on the fields and cut the sugarcane, she takes care of her younger siblings. While in school, her physical education teacher quickly recognized her talent and wanted to train her year round, requesting that her parents not take her to the fields during their period of migration. She was soon able to train with other kids that were honing their skills with the goal of entering the state selection of athletics.

For the past five months, 35 children have been staying at the Mann Deshi Champions field, training hard to be selected for the district level. In previous years, children from our area were rarely good enough to make it to the selection. This year, for the first time, 28 out of 30 children participating in the Mann Deshi Champions Program were selected to represent the Satara District. The 28 young athletes are now competing at state level, and will hopefully go on to compete at a national level soon.

We are so proud of all of our Mann Deshi Champions, and they prove to be a continuous source of inspiration. Most of the children are coming from poor backgrounds, and it’s heartwarming to see them accomplish their goals and dreams. 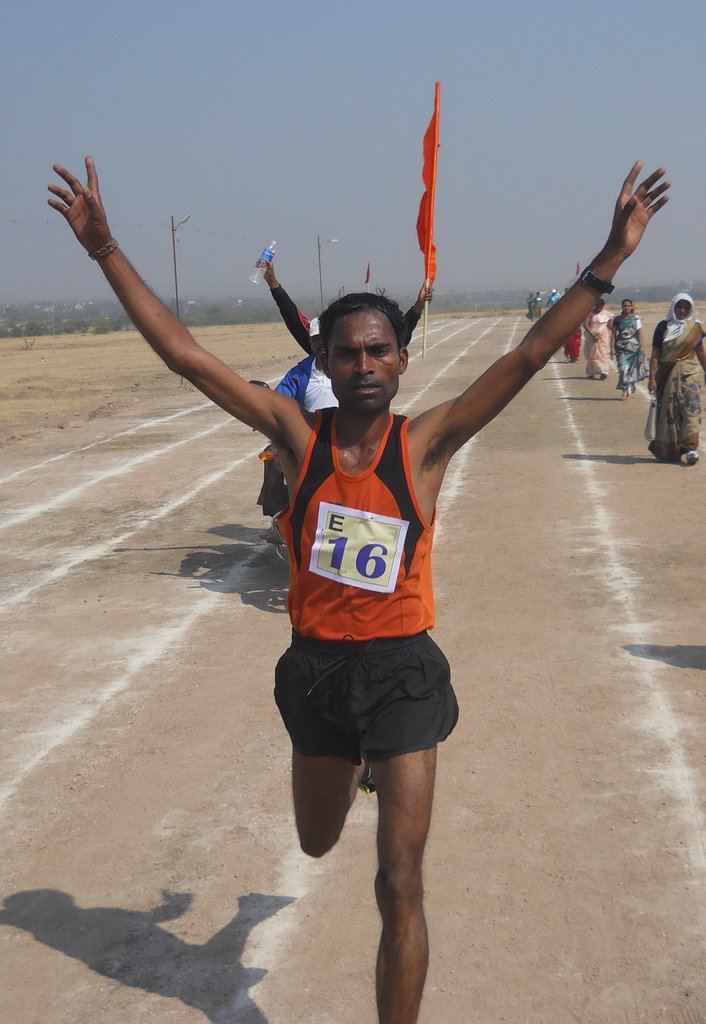 D.T. Dhebe raises his arms after winning the 10km

3000 runners compete at the Mann Deshi Mini-Marathon, in Mhaswad, Maharashtra

On Sunday, January 22nd, the village of Mhaswad, in the district of Satara, Maharashtra, hosted the 1st Mann Deshi Mini Marathon.  3196 competitors hailing from all over the district ran distances ranging from 1km to 10km. The event was organized by the Mann Deshi Foundation, an organization based in Mhaswad, which works for the empowerment of the underprivileged in the rural communities of Maharashtra.

The Mann Deshi Foundation has launched the Mann Deshi Champions Sports program, providing the children of Mhaswad and neighboring villages with sports facilities and training in a region that offers few opportunities in athletics. “We find sports to be imperative to the full development of the children and we want to offer them access to safe infrastructures, often inaccessible in rural India. There is a strong link between sports involvement and youth development. It promotes their social development and team working, and increases a child’s feeling of self worth and confidence through the membership of a team. We didn’t expect the overwhelming support we have received.

After sending out letters to schools in the area, we were amazed to see more than 250 kids from Mhaswad register for the program in the first month alone.” – says Mrs.Chetna Sinha, Founder of the Mann Deshi Foundation.

The twelve races all ended with a lap around the brand new Mhaswad running track, which was built by the Mann Deshi Foundation in December 2010. The runners were joined by more than 1000 supporters for the award ceremony, and all of the winners were welcomed on stage with spectacular cheers. The trophies and certificates were handed out by the mayor Vaishali Lokhande, Doctor Vasant Masal, the deputy mayor of Mhaswad, members of the Municipal Council, and trustees of the Mann Deshi Foundation. In addition, former athlete Shri Ramesh Tawde, and M.L.A. Jaykumar Gore were present to congratulate the winners and address the audience.

This will not be possible to organize a huge competition without the support of our donors.  Look forward for your regular support. 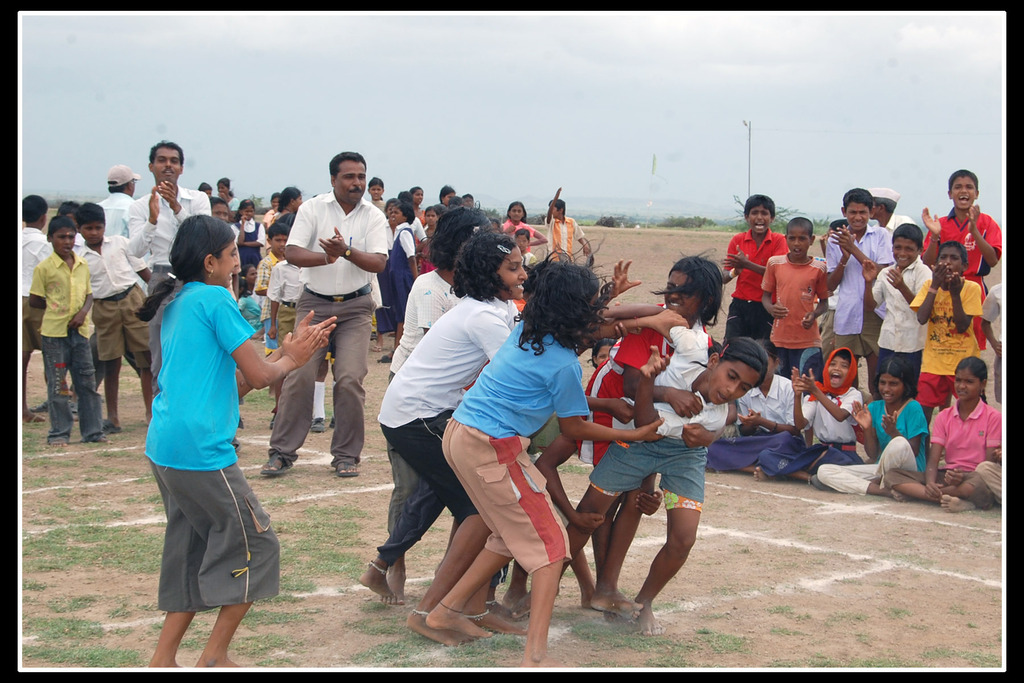 Mann Deshi Champion is under the expert care of our sports camp coaches, kids not only learn individual, sport-oriented skills, but also develop individually and collectively, learning teamwork and building character and life skills through sports.

In November, 2011 MDC has organized Marathon event (800 mtrs) where 350 children’s (both boys and girls) were participated from all over Satara District.  Out of this 100 children’s were selected for 10 days camp which was arranged in January, 2012.  In this camp children’s were given advanced training by expert coach.  All the arrangements for their food and lodging were itself made by Mann Deshi.  After this training out of 100 children’s best 40 players were selected.  And these 40 players are getting advanced skills training from Mann Deshi Champion.  Mann Deshi has also sponsored T-shirts, Shoes, Sports kits, Sweaters and blankets to the talented under privileged player.

Mann Deshi Champion is planning to send 10 best players out of the 40 above for “Krida Prabodhini Academy, Balewadi, Pune” to create champions at national level.  Krida Probodhini will provide both short term and long term training programmes ranging from 15 day courses to residential yearly training.  The distance learning program will involve 100 days training at Balewadi.  It will adopt a few top players who will get free training in the academy including free stay, free traveling and free equipment.  Krida Probodhini also develops their own team with the selected candidates and sends them in to participate in various tournaments.

Next, Mann Deshi Champion is planning to initiate instruction on “KUSHTI” a traditional Indian wrestling for rural girls and boys.

Thank you to all the donors and supporters.  Mann Deshi appreciates its donors support.

Thank you very much again ! 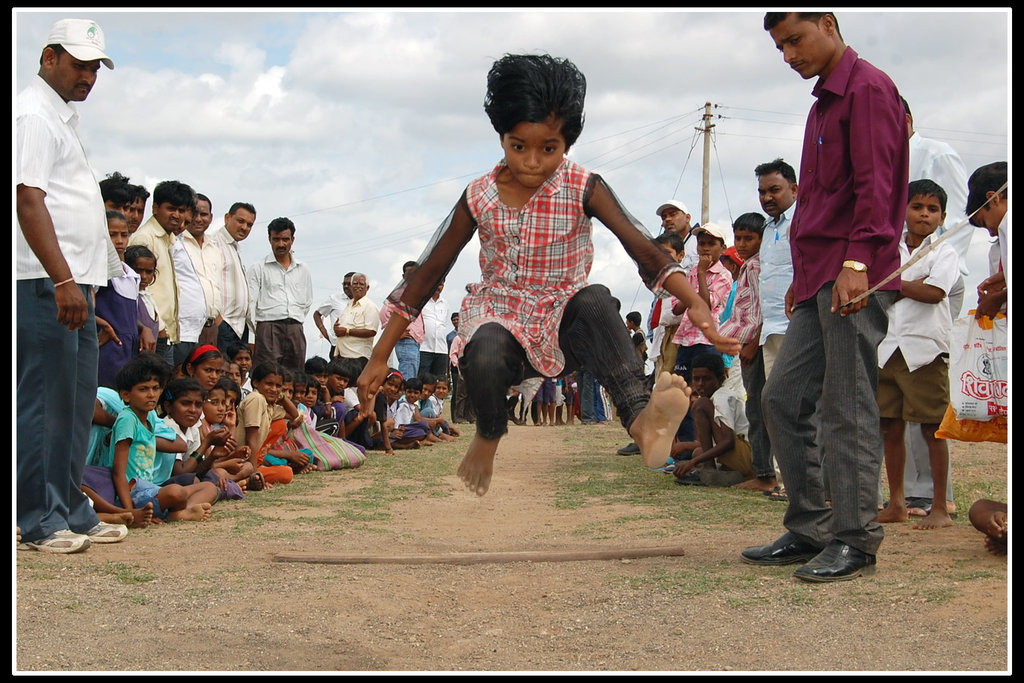 Project to provide children from Mann Deshi Champions with shoes and sport materials:   Be In Their Shoes – BITS:

Marcel, together with Emilia Galiano (intern from Italy, Johns Hopkins University), create an own project through an idea to collect donations from their entire network in Brazil, Italy and other countries, and use this money to buy shoes to the children and give them safety and motivation to practice sports at Mann Deshi Champions program.

They developed a public website (beintheirshoes.blogspot.com) where they publish all the information about the creation of the idea, the structure of Mann Deshi Foundation (and Mann Deshi Champions), the instructions to donate and funny things to make the project successful.

After three weeks of the launch of the project they collected USD 5.035 dollars coming from Brazil, Italy, Germany and United States. The website received more than 3500 page views in the English version and more 3000 views on the Portuguese and Italian versions. Through all the Social Networks like Facebook and Twiter and also through e-mails list they spread out the idea and provided considered exposure to Mann Deshi and through a different reality faced by these children in Mashwad.

After every USD1.500 dollars donated, they defined a funny activity to do with the children: (i) in the first activity, besides jumping and making fun, they provided chocolate for all of them; (ii) in the second target they danced an American song (Party Rock) with the children and gave them pineapple juice; (iii) in the third target (after achieving USD 4.500 dollars), they danced a bollywood song (Dhinka Chika) and bought school notebooks for everyone.

Besides the shoes for 185 children, they were able to buy 185 pairs of socks, goal net, volleyball net, football balls, karate, badminton, baseball and football general equipments.  This sports equipment will be used by the children participating to the Mann Deshi Champions Program: they will keep the shoes and the socks, while the rest will be kept in a storehouse in the practice field.

The project went over the expectations and brought repercussion worldwide.   Thank you to all the donors and supporters.  Mann Deshi appreciates its donors support.

Thank you very much again !

Support another project run by Mann Deshi Foundation that needs your help, such as: 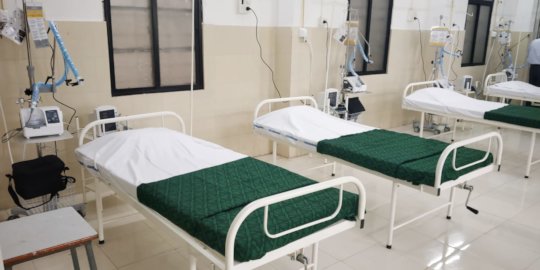 GlobalGiving
Guarantee
Donate https://www.globalgiving.org/dy/cart/view/gg.html?cmd=addItem&projid=7404&rf=microdata&frequency=ONCE&amount=25
Please Note
WARNING: Javascript is currently disabled or is not available in your browser. GlobalGiving makes extensive use of Javascript and will not function properly with Javascript disabled. Please enable Javascript and refresh this page.