#GivingTuesday (and other days of the week) 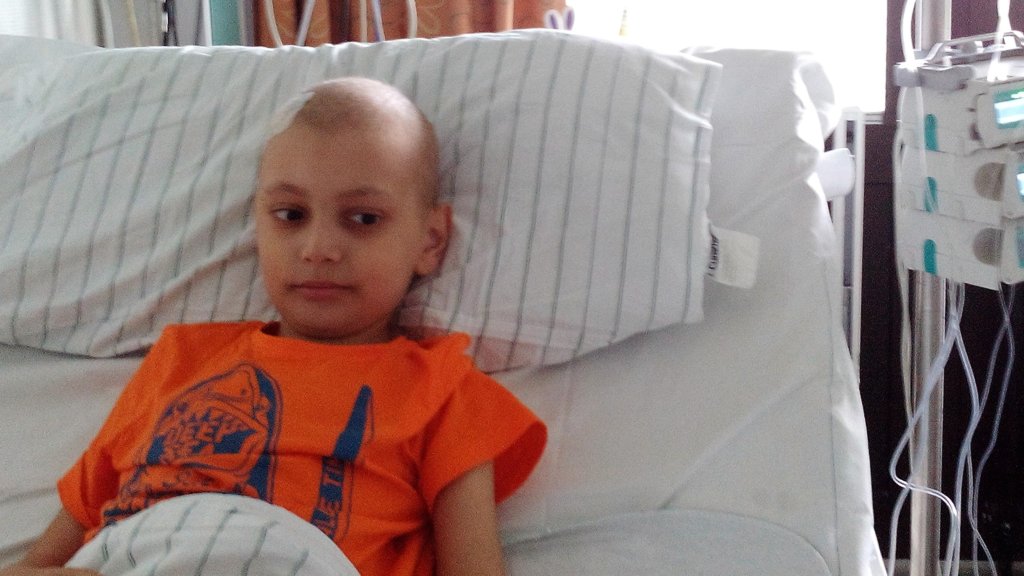 A week from now, on November 29th #GivingTuesday will celebrate charitable giving during holiday season.  Many stories from causes, volunteers, donors and beneficiaries will be heard in an effort to give voice to those of us who are less fortunate and to lessen their burden.

This is our project's story.  Narek is an Armenian boy who needs help to afford chemotherapy for brain tumor.
Here is a letter from his mom:

Good day,
I am writing in hopes to find your support for the treatment of my son Narek.
Narek is now 11 years old. He was born perfectly healthy and was enjoying his childhood like all other children. He began practicing chess at the early age of 4 and attending chess academy at the age of 6 and soon ensured 3rd category qualification. At school he was an excellent pupil with excellent marks. He especially adored math and Armenian studies. Narek was distinguished by his exemplary conduct and knowledge.
Narek was diagnosed with IV category brain tumor (meduloblastoma) in November 27, 2015. Forecasts of doctors were not encouraging and an immediate surgery was necessary to save the child's life. We were recommended to perform the surgery in Germany or Israel due to its complicated nature. A number of clinics refused to perform this kind surgery, but we managed to find a German clinic willing to perform it.
We were able to find the preliminary required sum amounting to 23000 Euros with great efforts and traveled to Germany. The surgery went well and the main body of the tumor was dissected. Doctors recommended passing intensive courses of chemotherapy and radiotherapy due to metastases found at inoperable sections of the brain.
We were able to commence the chemotherapy by the support of our friends and donations amounting to 14000 Euros, but unfortunately it was not enough to complete the course. We then referred to several German charitable organizations which kindly provided us with 33000 Euros to continue Narek's treatment. Narek needed platelet and blood transfusions every time after intensive chemotherapy sessions. After two courses of chemotherapy the results came back better than expected and metastases reduced by over 50%. We were sent to Cologne Clinic to pass radiotherapy course.
A 45-day treatment gave excellent results reducing metastases by 50%, but there were still some small formations left which the doctors promised to treat by yet another course of chemotherapy costing 42000 Euros. The Clinic refuses continuing the treatment without the due sum paid while time works against Narek and any delay can bring to the re-occurrence of the condition. The doctors say my son will not get the chance of second treatment if we lose this one. Currently I am in a desperate situation. The 10 months of suffering and struggle of my son may vanish because of that sum. Narek wasn't able to speak for about 8 months after the surgery. He is still confined to a wheelchair, but he is a strong boy and you could tell by the look in his eyes that he struggles for his life each and every moment. Please, help Narek overcome this last ordeal. He needs this support more than ever.
We have applied to several funds, but got no response. I am not able to look into my son's eyes when he asks about when he is to start the next stage of the treatment and return to his homeland to his friends and relatives whom he misses tremendously.
Narek`s mother, Lilit

If you would like to help Narek's family, we will be very grateful for your support on any day of the week, but especially during #GivingTuesday!  Thanks to Bill & Melinda Gates Foundation, 50% match to your donation (up to $1,000) will be made during that day while funds last.  So save the date - November 29th - and join us in our celebration of Narek and other brave kids and families!  Thank you so much! 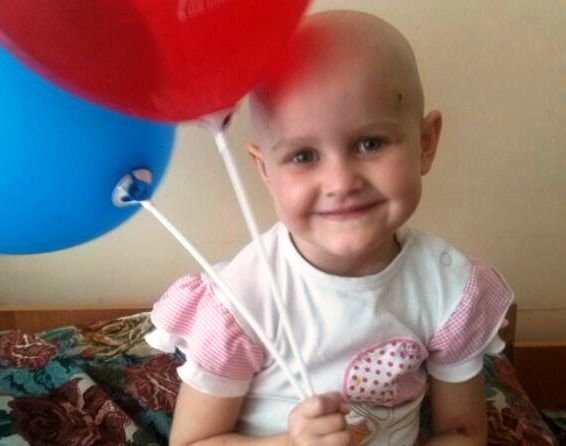 Last time, we told you about Adelya, a 12-year old from Russia who traveled to Houston as a last chance to save her life.  We are happy to report that Adelya was able to achieve remission, and although she remains in a fragile state, she can now be considered a candidate for a bone marrow transplant from a donor.  We are very hopeful that with the help of her family, friends, donors, and supporters Adelya will win this battle!

Another young patient who needs bone marrow transplant is a four-year old Uliana from Ukraine.  Uliana has always been a very healthy girl. Unfortunately, this summer her happy childhood has been interrupted by a sudden onset of leukemia. Uliana spent several months receiving treatment at her home town, but then her family had to take her to Italy for high-dose chemotherapy and bone marrow transplant. This is a risky procedure, and transplantations are not available for children with leukemia in Ukraine. Uliana's 9-year old brother will be her donor. The family raised most of the required amount of 65,000 euros. However, they still need to raise 20,000 euros more to proceed to transplantation. Please consider supporting Uliana and children like her!

A convenient way to show your support is to sign up for recurring donations that will be made automatically, every month, for as long as you would like.  Thanks again for your incredible help and kindness! 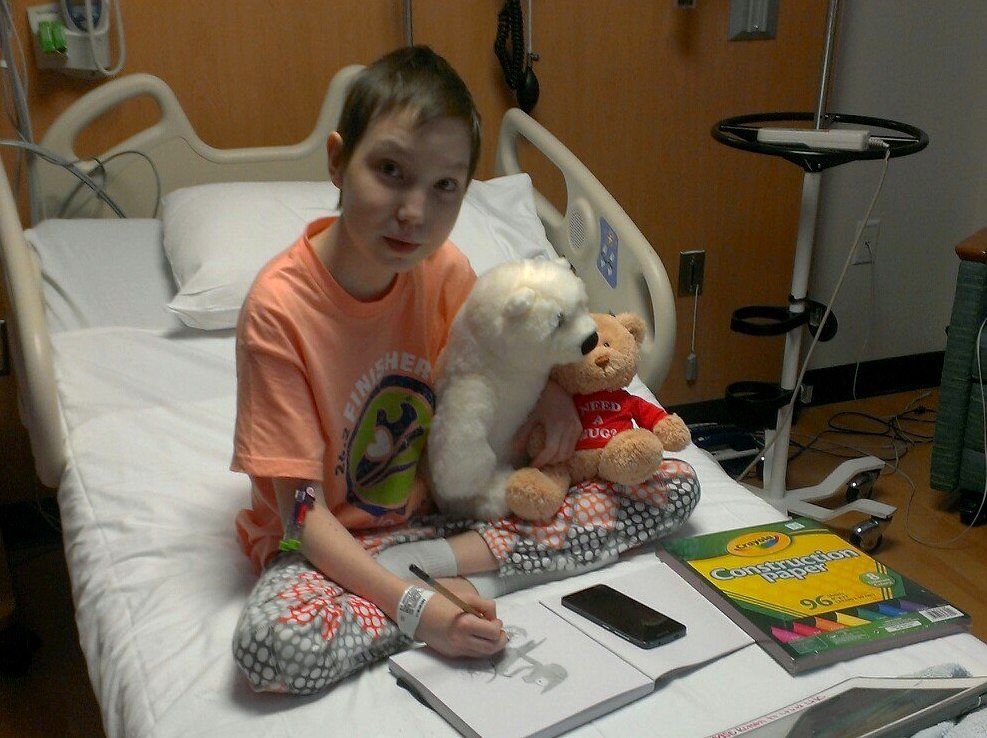 Recently, we met a new patient here in Houston.  Adelya came here from Ulyanovsk in Russia.  She is 12 year old, but she looks much younger. Four years ago, Adelya was diagnosed with high-risk leukemia. She was hospitalized at Blokhin Institute, the leading cancer hospital in Moscow, Russia. After a year of treatment, she was discharged in a stable remission. Unfortunately, within a year, she was diagnosed with secondary leukemia that required more therapy and bone marrow transplantation. In 2015, Adelya had a relapse. After additional treatment she went into remission again, but it was very short, and the test results in February 2016 confirmed a second relapse of acute myeloid leukemia. This time, Adelya was not offered any further treatment.

Adelya's family began looking for the hospitals abroad that may be able to help her. They came across MD Anderson Cancer Center in Houston that agreed to accept Adelya. In April Adelya arrived to Texas, and she was hospitalized immeediately.  She will have a long and difficult treatment ahead of her and the family needs our support.  Here is what her mom Zulfia had to say: "I admire Adelya's maturity, wisdom and willingness to fight. For the last 4 years she has spent most of the time in the hospitals and clinics, not having an ordinary life of a child of her age. We believe that all the good things are ahead of us and we will find the way to beat cancer, so she can enjoy the future."

I hope you can join us tomorrow, June 15th, and donate to help Adelya and other little patients like her who had to face cancer so early in their lives.  You can donate starting at 8 am CDT (16:00 Moscow time) and receive a bonus of 50% (on donations of $1,000 or less).  Thanks again for your generous support!

Support Arina's family in their fight!

Last time we asked for your help for Ostap, a young boy from Ukraine.  Fortunately, his family had an outpouring of support and were able to raise all the needed funds on their own.  We used your donations to help two other children, 8-year-old girls from Russia: Almira from Buryatia, who needed to travel to Germany to ensure her leukemia remains in remission and Nina from Stavropol, who had to travel to Israel to receive an accurate diagnosis and begin treatment for lymphoma.

Our most recent patient is Arina from Krasnoyarsk, Russia.  For the last 6 years she has been suffering from neuroblastoma, an aggressive type of pediatric cancer.  In 2009, she had the initial surgery and chemotherapy for a large abdominal tumor. Unfortunately, she relapsed just a few months later. The retesting of the tumor showed that the diagnosis was not correct and she did not receive the right therapy. The treatment was restarted, and Arina needed to undergo 8 more intensive chemotherapy cycles, followed by a maintenance regimen. Yet, disease returned again and spread to Arina's brain. More chemotherapy followed, which helped control cancer, but also made it more difficult for Arina to recover after each cycle.  Seeking alternatives, Arina's parents learned about a novel way to fight neuroblastoma that was available in Germany and decided to take a chance. Although Arina had a hard time tolerating immunotherapy, after six months she finally achieved remission. Upon return home to Krasnoyarsk she was able to start school and enjoy a normal life. Regular visits to Germany for evaluations allowed her doctors to detect even tiniest changes in her condition. Most recently, Arina was found to have an small but active lesion in her head. Due to its difficult location, it is not easy to treat, but the doctors are hopeful. They are offering Arina to undergo bone marrow transplant from a donor, which may give her a chance for a sustained remission.  However, the cost of treatment is very high, and Arina's family is doing all they can to raise the money.

One great way to help patients like Arina is to sign up for recurring donations - that way we can ensure that no matter when a patient needs help, we have the funds to help them.  You can sign up at https://www.globalgiving.org/projects/help-children-with-cancer-access-treatment/?show=recurring

Thanks again for everything you do! 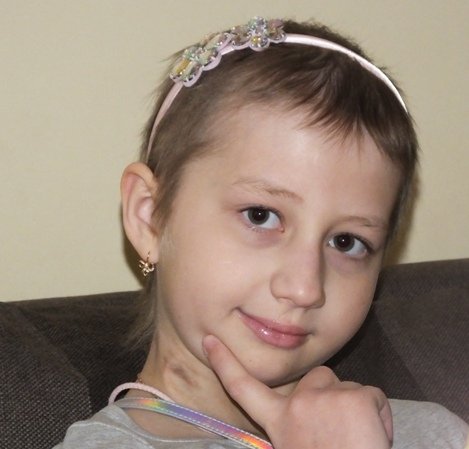 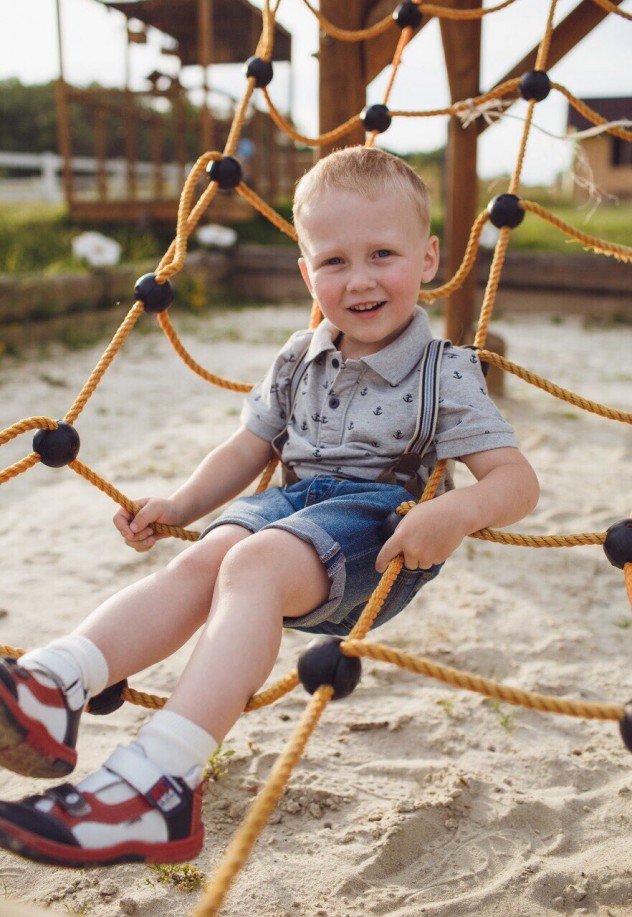 Dear friends, thank you so much for your support for Andrii, a 10-year-old lymphoma patient from Ukraine. Thanks to your generous donations and a $5,167 grant from the First Hand Foundation, Andrii received the leg surgery. He can walk now with the crutches. The treatment will continue. Thank you once again for supporting Andrii!

At this time, we are extending our support to a 3-year-old Ostap from the Ukrainian city of Ivano-Frankivsk. In mid-September, the strange bruises have appeared around Ostap’s eyes. At first, his parents thought it was a result of blood vessels broke but showed Ostap to the doctors anyway. Unfortunately, doctors could not detect the cause. The boy was given medicines to strengthen his blood vessels. The bruises, however, did not go away and started to come off more and often. The parents were desperate as many tests and visits to the doctors varied in opinion. In December, parents had decided to check in with a German hospital in Nurnberg where one of their ex-classmates worked. Ostap had the blood test followed by the bone marrow biopsy and was diagnosed with neuroblastoma. He was taken into the hospital and on December 4 the chemotherapy began. Please support this family as they scrambling for resources to pay for the full course of treatment, including possible bone marrow transplantation. Thank you for your consideration!

Looking into the approaching year 2016, we wish you and your loved ones a wonderful holiday season and a healthy and peaceful year ahead. Thank you for staying with our project and helping children and families in need! 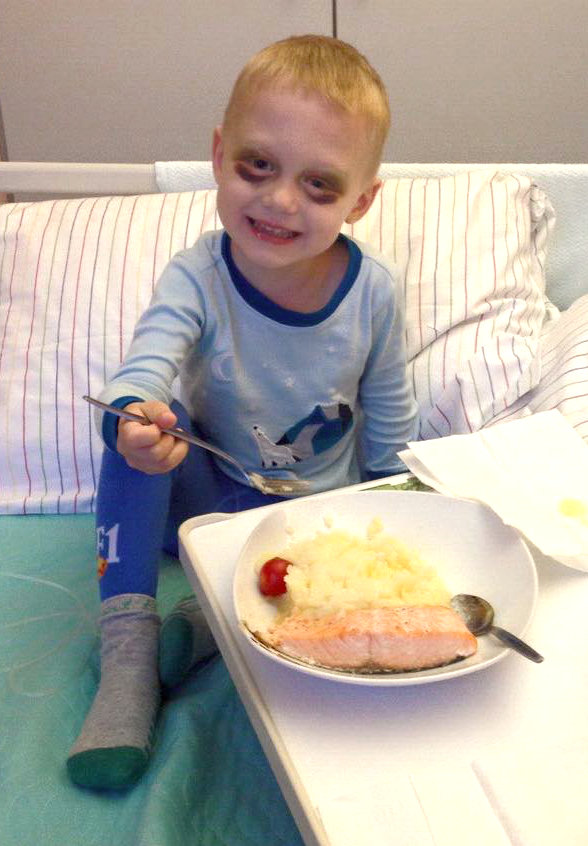 Ostap in the hospital