by Buds of Christ Charitable Trust 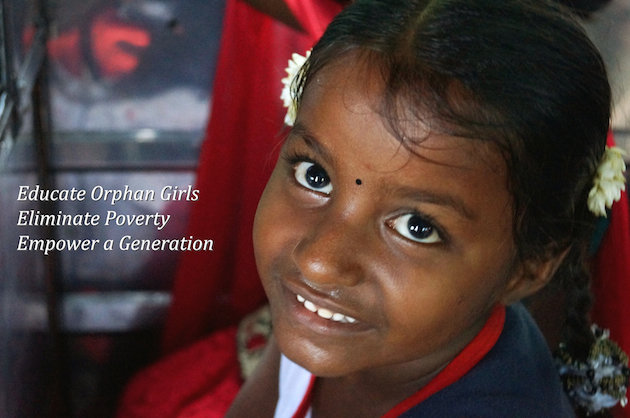 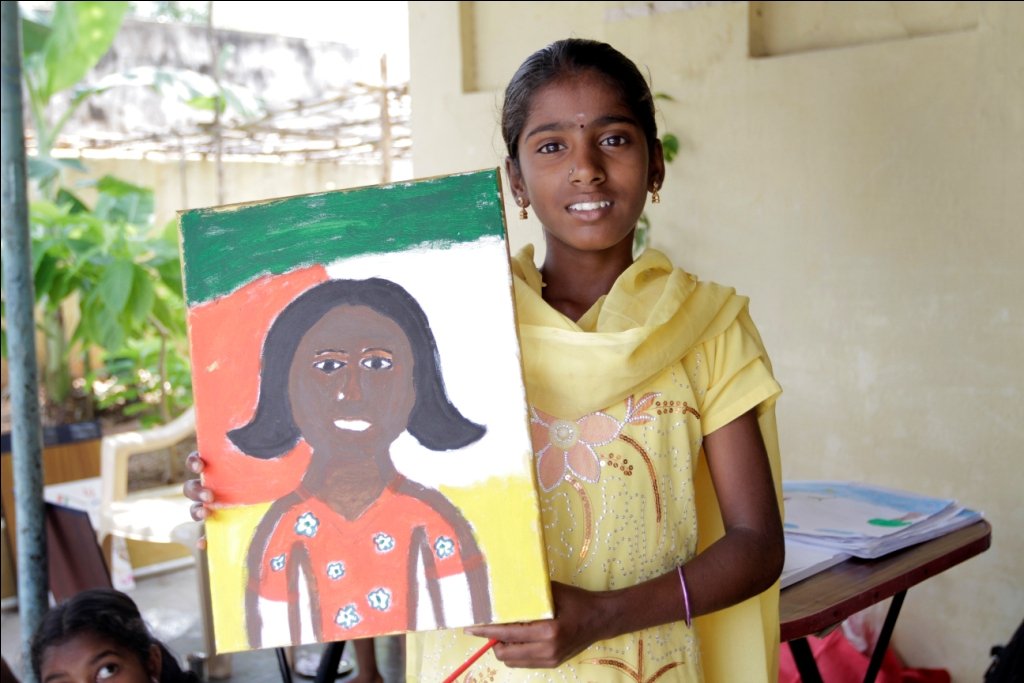 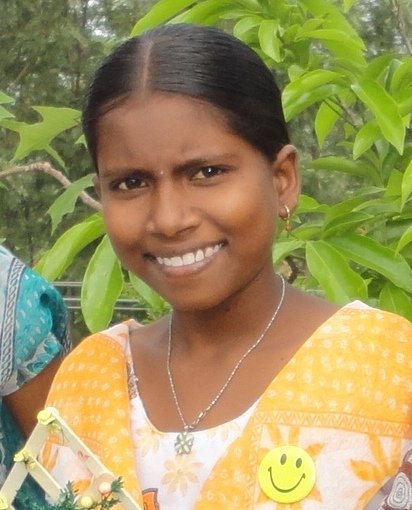 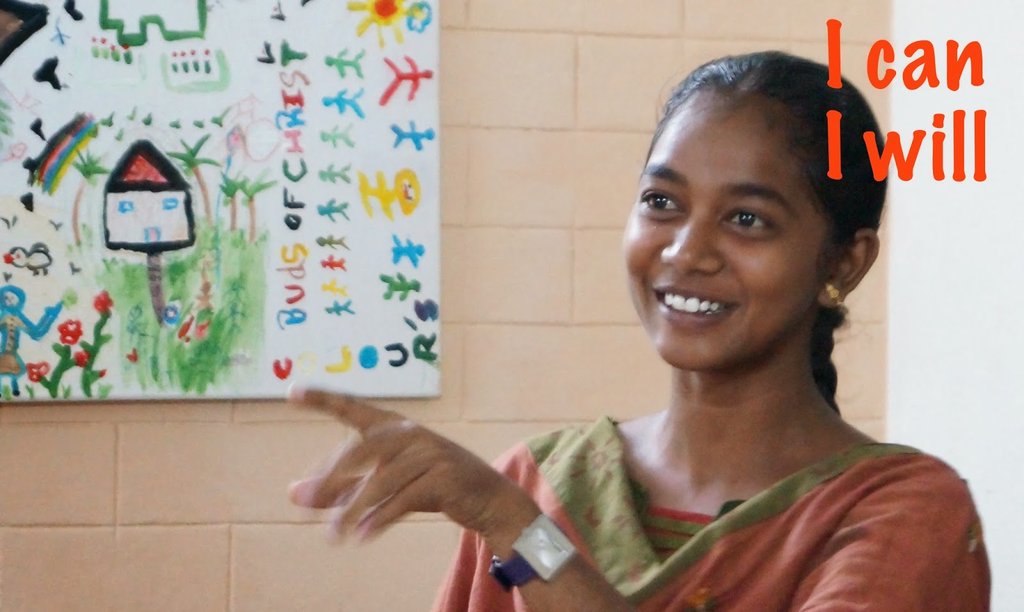 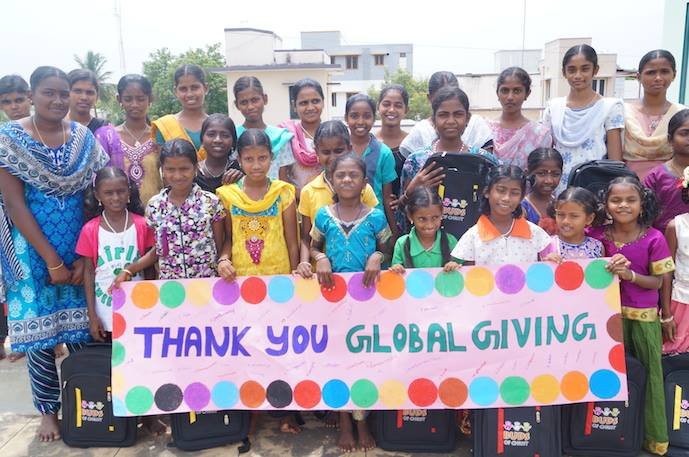 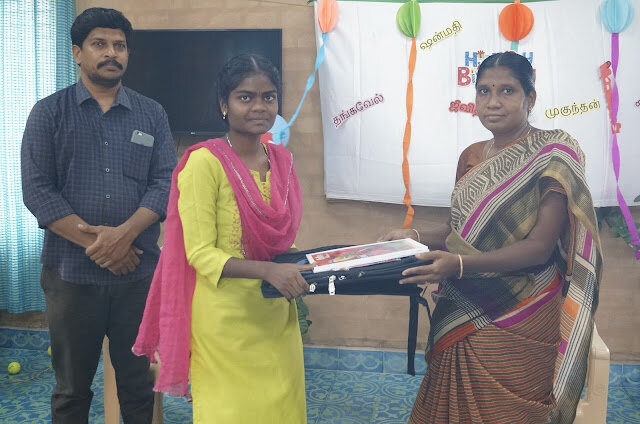 “Education is for improving the lives of other and for leaving our community and world better than we found it.”

Buds of Christ organised Education support program for boys and girls on 7 October 2021. 16 children from class 9th to 12th participated and received school bags and notebooks. The event started with a moral story on Being Focussed on the Vision for life shared by Mr. Jeyapaul Director of Buds of Christ. Following that Communication skill was taught to children as part of Life Skills Education.

The reason for Buds of Christ to enhance the skills of children on Life skills goes with the quote that “Education is not just about going to school and getting a degree. It’s about widening our knowledge and absorbing the truth about life".

This was followed by life experience sharing by the Program Chief Guest Ms. Kaleeswari, Commercial Assistant from TamilNadu Electricity Board. She shared her life history and motivated the children to be eager for studies. She also mentioned that there were tough times in her life as she did part time job and studied. She added, “ There are lot of jobs available but only we have to study with a focus and determination to achieve that.”  She encouraged the children to study well and made them to realise the importance of education. She then distributed school bags and notebooks to the children. The event concluded with note of thanks and children were motivated and encouraged about their studies.

Anu on the formation to be a Fashion Designer 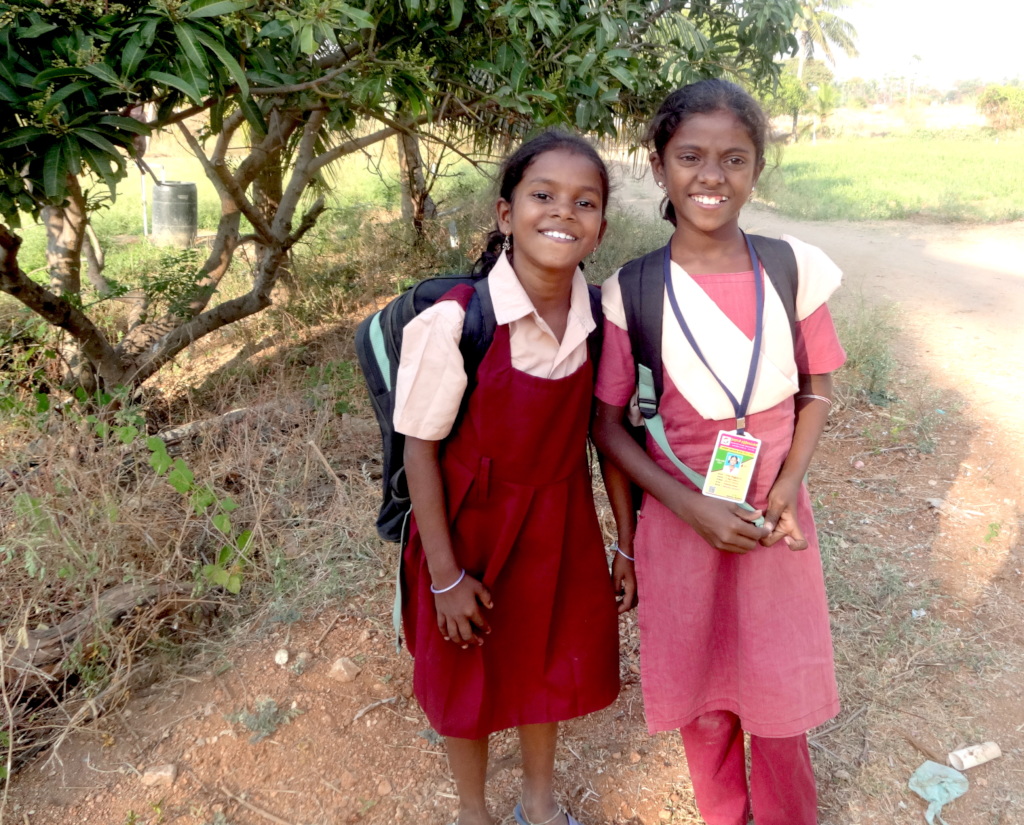 Anu and Thiru are two orphan children who are looked after by their maternal grand parents. Though their grandparents are very aged, they work hard to support the family. It has been a 9 year journey for Buds of Christ with Anu and Thiru. On our first meeting with the children at their home; they were silent and did not even welcome us, as it was new for them to see people outside their family coming to their home. Their mother had just passed away due to a chronic ill health, when we visited them and the house was all filled with sadness. Earlier a year before, the children lost their father and it had been very hard time for them to take one loss after another.

The visit was to know the family, understand the support we can render to the children to live a quality and productive live. After multiple visits, the children started conversing with us through drawing. In their picture they had represented the loss of their mother and slowly we started inviting them to the centre for support groups and the children started meeting similar children (Who have lost their parents and were also affected by chronic ill health condition) and found a supportive group among them. They started meeting their friends once in 15 days, they used to have song sessions, dance, story telling and treatment education session. Later as Anu grew to her adolescence, she was guided to set her goals. She had interest in styling and creative in her drawings and paintings. During the first lock down, she also enrolled into the tailoring class and was able to sew chudidhars and even saree blouse for her grandmother and neighbors. On seeing this passion, Buds of Christ had guided her to apply for the graduation course in Fashion designing. Its a great achievement for the family, especially her grand mother to see her grandchild enter college in this academic. We also join in the joy of the grand parents in helping her realize her dream.

Its such Anus and Tirus, we have been working for the last 11 years at Namakkal and Salem. We thank all our supporters through GlobalGiving in making this Education a dream come true. 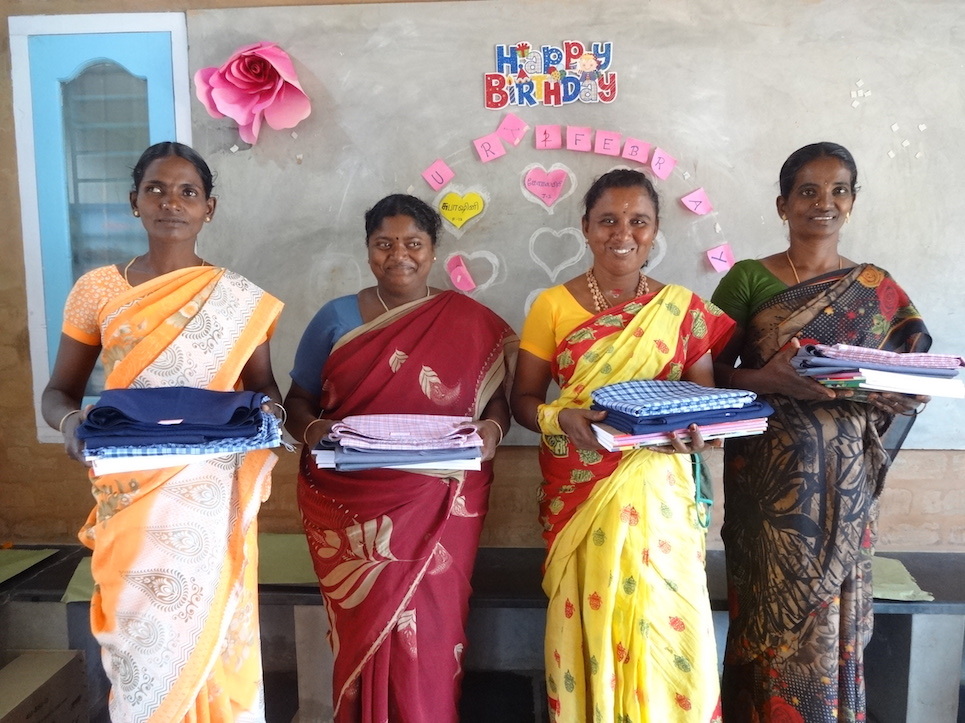 The educational support for the needy girls has been provided in both namakkal and Salem. With the recent announcement of the government to reopen the schools for classes 9th to 12th , the girls under our care were provided with school uniforms. As most of the care takers are daily wage workers the support has been a big help as after corona most of them have lost jobs and the income they have been getting in their new jobs are meager.

An orphan girl under the care of her grand mother was very happy on recieveing the uniform set and also expressed that she was excited to go back to school because of the thought of wearing a new uniform.

For Deepika who belongs to the scheduled tribe it was a moment of joy to receive the new uniform set as her mother would not have been able to buy especially towards the end of the academic year.

Getting back to school after Corona 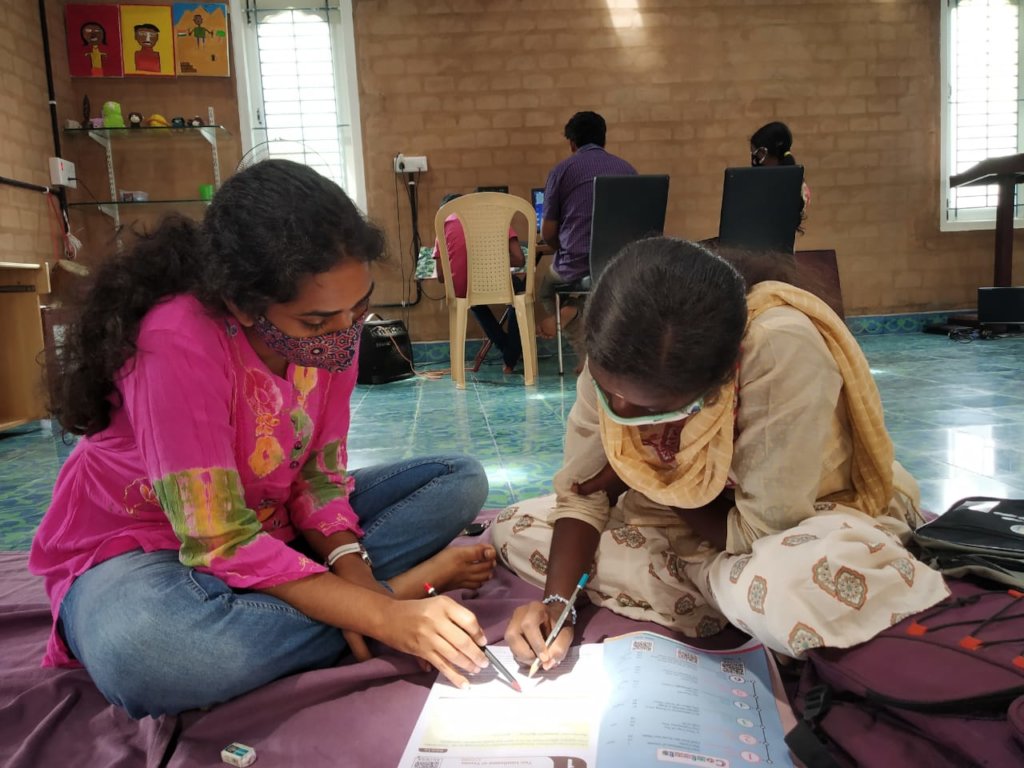 The Corona Pandemic affected the schooling of our children whom we support due to complete lock down. As most of them are under the care of grand-parents and extended families in the communities ,it has been a challenge to encourage them to study from home. Few girls who are located near the centre were able to access the online classes at our centre computers and also guided through our volunteers. But some living in remote areas, lack of transport made it more difficult for them to even avail the service at the centre.

Now with the treatment and the vaccines, the state government has announced the re-opening of schools from classes 9th to 12th. The public exams have been scheduled to be organized in the month of May. The field team of Buds of Christ has been following up the children and encouraging them to get back to school learning. The children and the care takers had been taught of all the precautionary measures of keeping oneself safe from Corona by wearing mask, using sanitizer or soap and maintaining social distance. Regular phone follow-up and masks are also provided to children.

Buds of Christ have also planned to provide uniform support currently for children in classes 9th and 11th standard. The school kits will be provided to all the children who will be attending school to encourage them and also ease the burden on the care takers.

We thank GlobalGiving friends and partners who have been helping us shape a better future for the young girls in rural areas of our target district and we look forward to your continuous support. 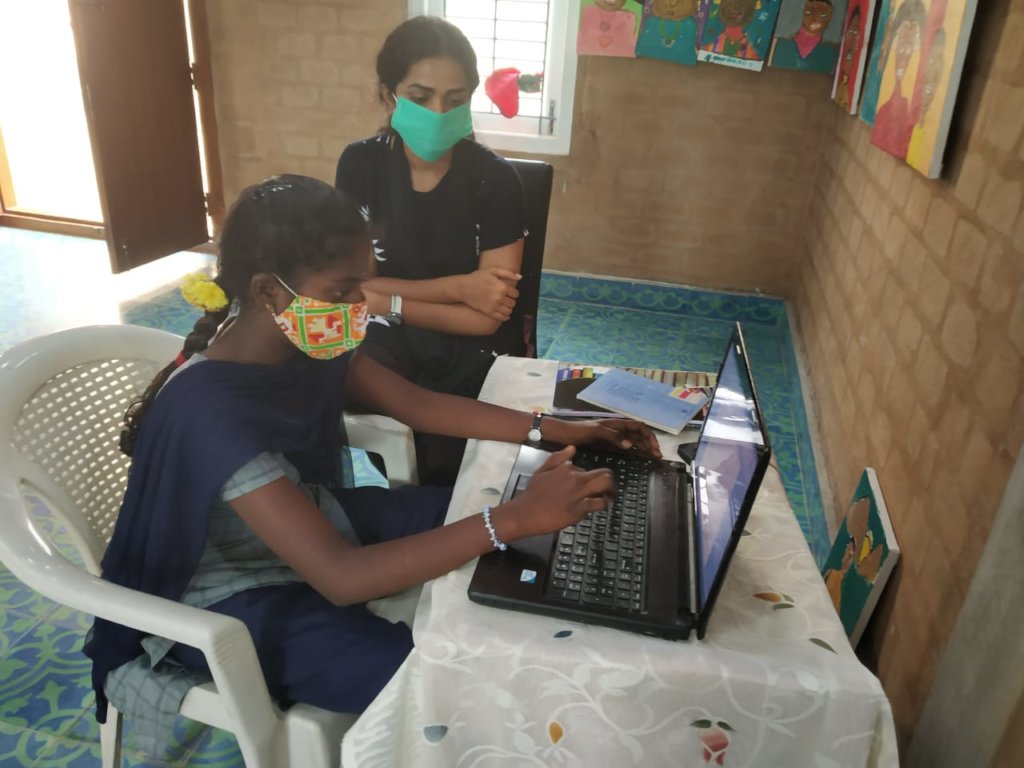 Barathi, Masters in Clinical Nutrition in her journey with Buds of Christ 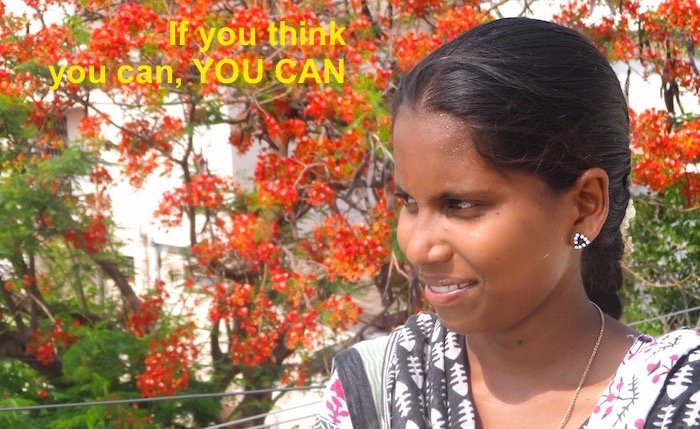 if you think you can you can

Buds of Christ focuses it’s work on empowerment of girl children with holistic development, which includes ensuring children are in schools or colleges, equipping them with life skills, encouraging to participate in sports, arts and cultural activities.

Buds of Christ encourage girl children to complete high school and attend college.  As most of them belong to poor economic household and under the care of widow mothers and grandparents; the family may need them to work to provide much-needed income and often girls in rural conditions are often the least encouraged for higher education and married early by the families.

Barathi is a successful child who has overcome all the challenges that came in her way and her pillar of support has been her mother who had BIG dreams for her daughter. Her father died due to a snake bite, when she was 10 months old and it was her mother a widow who has been managing the family. Her elder sister got married early against the family wishes, but all the challenging situation did not deter the interest Barathi had towards her future. Her mother works as a daily wageworker in the garbage cleaning contract work and has been supporting the family with the income and so her journey of completing her Masters degree in clinical nutrition has not been an easy pathway.

When we met Barathi in 2010 she was in her 7th standard and was going to school, just like any other normal child in the community. Their house did not have an electricity connection and Barathi and her elder sister used to study only on streetlights. With the intervention of Buds of Christ from there, the electricity supply was initiated within a span of two months. Barathi has been part of Buds of Christ, since then and has been supported with uniform, stationery, notebooks and the school kit every academic year. After class 12, she chose to do her studies on Bachelors in Nutrition and Dietetics and shine as class topper when she completed her degree.

In addition she was regular in attending the life skills sessions organized every weekend at the Centre. The sessions also developed her personally from a shy person to be a confident and assertive person. Through the sessions she also was able to develop a vision for herself. From then, she had an aspiration to do a course in the medical field and her dream has become a reality through the guidance and support from Buds of Christ.

In 2020, Barathi has completed her Masters in Clinical Nutrition from the Periyar University and is waiting for her results. She is also the first graduate in her family.

Donating through GlobalGiving is safe, secure, and easy with many payment options to choose from. View other ways to donate
Buds of Christ Charitable Trust has earned this recognition on GlobalGiving:

GlobalGiving
Guarantee
Donate https://www.globalgiving.org/dy/cart/view/gg.html?cmd=addItem&projid=12193&rf=microdata&frequency=ONCE&amount=25
Please Note
WARNING: Javascript is currently disabled or is not available in your browser. GlobalGiving makes extensive use of Javascript and will not function properly with Javascript disabled. Please enable Javascript and refresh this page.