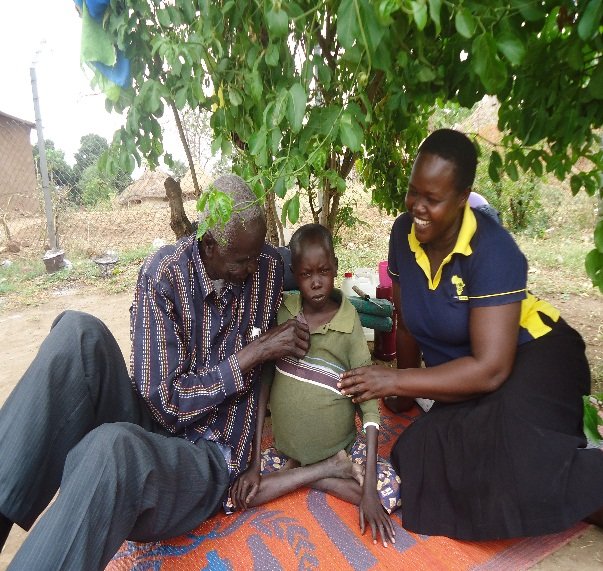 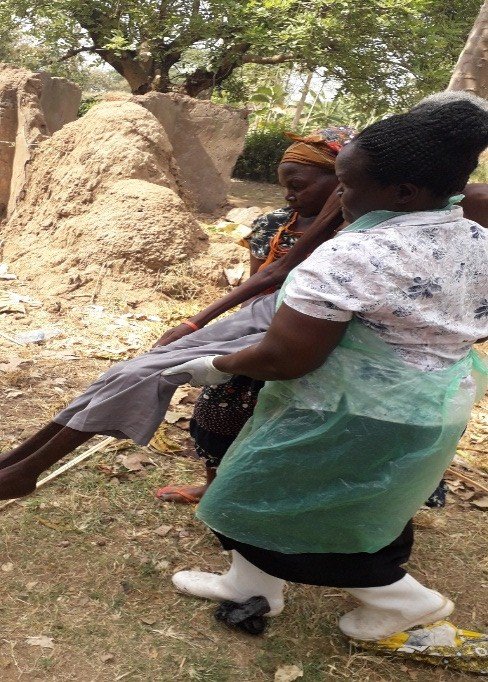 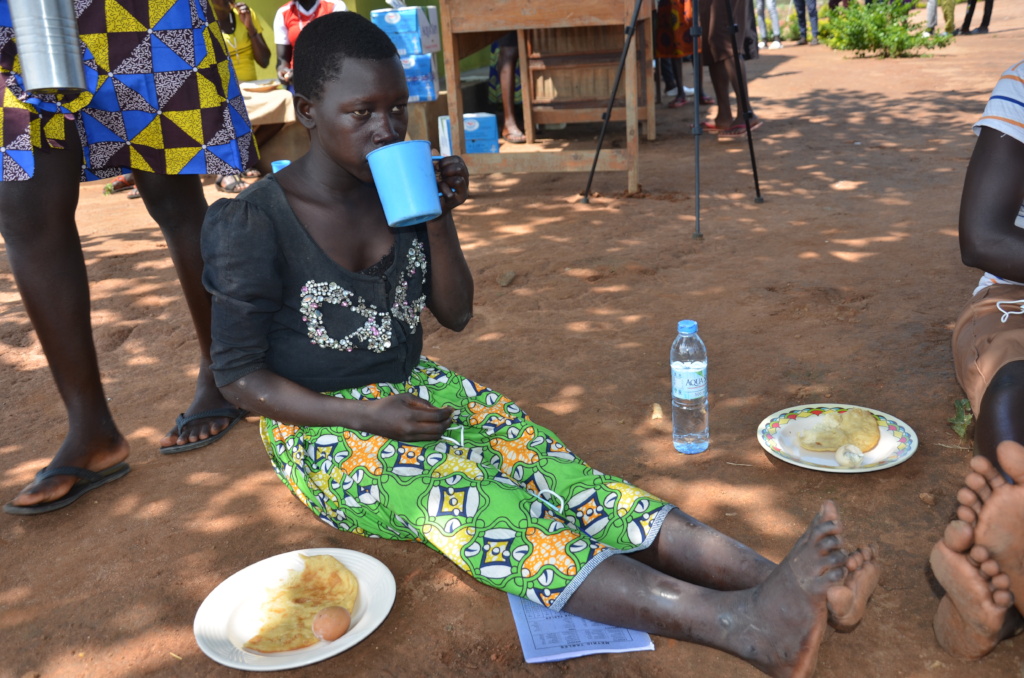 Mary having breakfast during the training

Mary is a 15 year old south sudanese refugee living at Boroli Refugee settlement of Adjumani. She suffers from Epilepsy and is also deaf, she is a total orphan and under the care of her grandmother. Because of her health conditions, she was not able to continue with education and the grandmother feels overwhelmed with caring for her given she is also poor and with no source of livelihood. We recently enrolled Mary in our Agriculture program where she is currently receiving training in goat raring and will be receiving one female goat which Mary and the grandmother hope will support them to earn income. We are also continuing to provide the needed counseling support to Mary and grandmother where we use the grandmother to translate to her in SIGN LANGUAGE since she is able to communicate to her in sign language. We are looking forward to a better life for Mary and the grandmother. Your generosity has made this possible and we will continue to economically empower children with chronic illnesses to restore their hope and improve on their quality of life.

Hope for Daniel and Norah

For now 3  months, the hope of living longer with HIV/AIDs and becoming doctors specifically padeatricians for Daniel and Norah have been revived. We your generosity, we have been paying a motor cycle to take Daniel and Norah to hospital to pick their ARV drugs that are given on monthly basis. We also provided them with all school requirements and tuition fees. We made arrangements with the school that Daniel and Norah together with 4 other children who are living with HIV/AIDs and studying in the same school be provided with nutriotious porridge each morning before they take their medication. We provided soya flour mixed with silver fish, peanut paste and millet. They are now enjoying their studies and copying up well with their ARV medication.

Daniel and Norah of ages 12 and 14 years respectievly lost both of their parents to HIV/AIDs and are also both living with HIV/AIDs. The two kids do not know where the their father comes from since the mother brought them to her home while still very young and when the mother died they continued to stay with the grandmother. Unfortunately, the grandmother does not love them and has often called them LIVING CORPSES who dont deserve any care because they will soon die like their parents. The grandmother denies these kids food, soap and sometimes makes them sleep outside on the verandah. Infact currently, our organization is working with the local leadership because we would like to rent for them a small grass thatched house where they can peacefully stay. Daniel and Norah are severely traumatised because opf the stigma to the extent they had abandoned walking to hospital to pick drugs or take their ARV medication because they wanted to die.

We cannot thank you enough for restoring hope to Daniel and Norah. There are more than 25 other Daniels and Norahs in Katakwi district where we recently opened our new office. Sharing about our project with your network will go along way to help spread the word out there and help orphaned children living with HIV/AIDs live healthy lives.

David Elungat poses for photo with Daniel and Nora 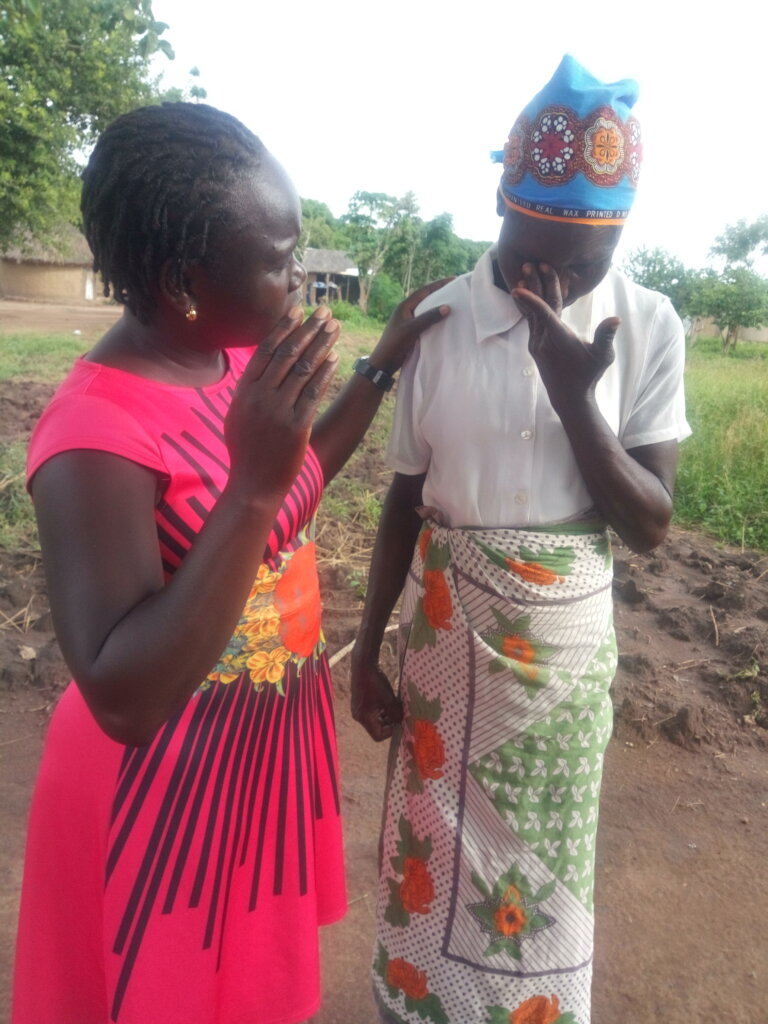 For the last three months, our counselor has been walking a journey of healing with Gladys, a south sudanese refugee single mother of three children who has been living with HIV/AIDs for the last 10 years. Despite counseling from the hospital and being enrolled in ARVs, Gladys has since been living in denial, a situation that caused alot of stress on her children too since she often refused to take ARVs questioning why she has to keep taking drugs when she is fine. The children had to constantly beg her to take the medication.

For our counseling jpourney with Gladys, its been three months of constant home visits, creating an environment for her to talk and share her experiences. The journey has not been easy but with prayers, Gladys was able to reach to terms with her sitaution. While this initially brough back the memories of the rape back in south sudan and how that ended her hopes of raising her three children aged  10, 15 and 17 years, continued talking and enabling Gladys share the pain has eventually yielded results.

According to one of her daughters ''Mummy now takes her ARVs on her own even without being reminded. We no lonmger have to beg her to take her medicines. We thank God for this change. Atleast we are now less stressed because we know that she will now be able to live longer when she adheres to her medication'.

This testimony of Gladys would not be possible without your love, compassion and sacrifices. Thank you for the kind donations taht is enabling us reach many more women living with HIV/AIDs and who have lost hope in life.

We are forever grateful for you generosity

In the midst of total COVID 19 lockdown, women and girls with palliative care needs continue to experience challenges accessing the necessary medical care, psychosocial support and mobility devices. For Joan (Not real name), there was a ray of hope, relief and excitment when a team from Voice for Humanity Uganda visited and supported her with cratches since one of her legs was ampitutated three months ago. To Joan, who is 14 years old and a refugee from south sudan, she had lost hope of continuing with her studies because she did not have any ways to go to school or even go and interract with friends in the neighborhood. Her story is a long and painful one that she could not share it all as the team is still developing trust and friendship with her. She was referred to Voice for Humanity Uganda by a womens refugee leader from Pagirinya refugee settlement who had witnessed the long suffering of Joan and when she had we could support, she was able to refer her for immediate help with the ctaches to help Joan move. Its your financial sacrifices that briong smiles and hope to refugee women and girls who are gpoing through pain, sufferning from chronic illnesses. 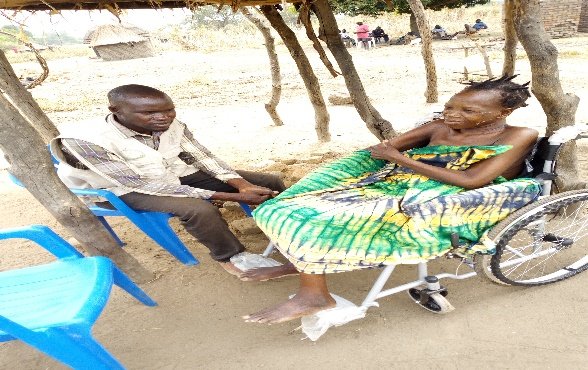 Mary (not real) name was cited by team of Peace Hospice Adjumani (a local organization that responds to the palliative care needs of persons with chronic illnesses and a partner of Voice for Humanity in this project)  while offering their routine services of palliative care in Adjumani Hospital. Even from a distance, she looked helpless and week.

Mary is a 46 years old woman, a widow with 3 children living in Minia village of Biyaya parish Adjumani town council in Adjumani District. Mary lost her husband in 2016 due to hypertension. Hereldest daughter is 17 years old and the main care taker of Mary in her current health condition while her youngest child is 10 years.

In 2010, Mary was hit with a log on right breast by the brother in-law in a fight over land that she was cultivating for which she was being denied access to by the brother in-law. Mary’s breast got inflamed and started bleeding.  She then sought medical help in various private clinics and public hospitals including Adjumani hospital with no improvement. In 2015 doctors in Adjumani hospital referred her to Lacor hospital in Gulu for biopsy, but after waiting for a month she was told the results got lost, they again requested for another sample which was taken and again sent to Lacor hospital, in two weeks’ time she was told sample taken was from a wrong site, Mary had used all the money she had, she gave up and went home.  While at home she became too ill and she was brought by neighbors to Adjumani hospital. A sample was taken again this time, the result came back in two weeks and a diagnosis of cancer of right breast was made with metastasis to the bones.

On 16/06/2020, as the team of peace hospice was in surgical ward, they cited Mary who looked helpless and week, while clerking she had severe and overwhelming pain; the team initiated her on oral liquid morphine. She was not told the meaning of cancer, but she kept on saying the brother in-law bewitched her because of the land. Her main concern was wheel chair because of failure to walk, lack of food for the children and school fee plus life after her death.  She was later on discharged from the hospital. While at home, due to failure to walk, Mary had been confined inside the house, plastic chair design acted as a bed and at the same time used as toilet. Mary spends both day and night on the chair in one position to the extent she developed a week limb.

Your donations received through GlobalGiving enabled Voice for Humanity Uganda and Peace Hospice Adjumani to procure A WHEEL CHAIR for Mary which has put a smile and restored hope not only to Mary but the whole family. The wheel chair was delivered to Mary on 23/01/2021. The family was excited and said they shall wheel their daughter in church the following day, it has reduced the burden of lifting her for toileting, and she can now eat without the fear of burdening us, we are able to enjoy her company and stories under the mango shade (said the daughter). Mary was overwhelmed with happiness on seeing team deliver to her the wheel chair. In her own words Mary said “I have not seen the outside environment for over six months, even the ray of sun burns my face, but life has come back again, may the Lord God protect Peace hospice and Voice for humanity, such that they may reach to other patients with the same services, if i die, I shall die a happy women she adds”. 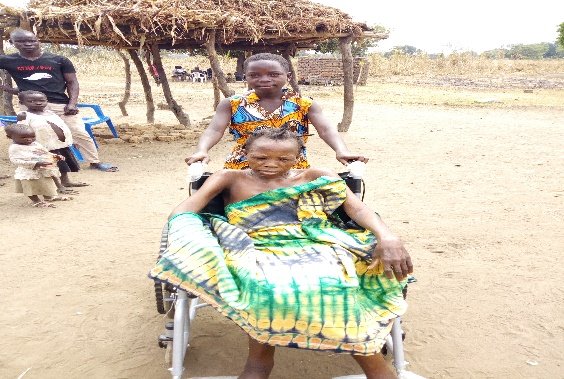 Mary being wheeled by her daughter

GlobalGiving
Guarantee
Donate https://www.globalgiving.org/dy/cart/view/gg.html?cmd=addItem&projid=49528&rf=microdata&frequency=ONCE&amount=25
Please Note
WARNING: Javascript is currently disabled or is not available in your browser. GlobalGiving makes extensive use of Javascript and will not function properly with Javascript disabled. Please enable Javascript and refresh this page.