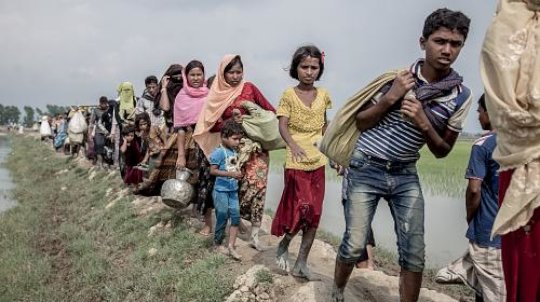 COX’S BAZAR (August 20, 2018) — As refugees from Myanmar complete one year in Bangladesh, their return to Myanmar with safety and dignity still remains a major concern for CARE and other humanitarian organizations. Many, including the refugee population, have already voiced their concerns for not being more involved in the return negotiation process.

“CARE calls out to all parties involved to ensure refugee returns are voluntary, informed, respectful, and conducted with safety and dignity. The key principle of ‘non-refoulement’ must be upheld and returns should commence only if there are no significant ongoing security risks in the area of return,” stresses Zia Choudhury, country director of CARE Bangladesh.

Since August 25, 2017, over 700,000 people from Myanmar have fled to Bangladesh[1], following an escalation of violence in Myanmar’s Northern Rakhine State. An estimated 919,000 refugees are now living in Cox’s Bazar, Bangladesh, close to the Myanmar border.

In response to the recent agreement on the return of refugees signed on November 23, 2017 between Bangladesh and Myanmar, CARE is urging both the governments to ensure safe return of the refugees.

Given the extreme levels of violence refugees have experienced, returns in the near future will be extremely challenging. “We will go back if our homes are rebuilt like they used to be before they were burned down; if we are given citizen rights as Rohingyas and as Muslims, and if we are given the freedom of movement,”says Omar a 22-year-old refugee living in Potibonia, Cox’s Bazar.

Most of the refugees who fled Myanmar since August 2017 are traumatized and lost everything. Many lost their family members.

“It was a Thursday night, and we heard some distant gunshots. But we didn’t bother much and went to sleep. Then in the morning they came and started burning down all our houses. We only managed to escape with our lives. People who couldn’t leave their homes were burnt alive. I don’t even know how many people died, so…so many,” tells Khatiza (40), a refugee living in Cox’s Bazar.

CARE urges both the governments to ensure that the challenges associated with safe returns are recognized in the ongoing negotiations. One way of doing this could be to consult with affected communities to make their voices heard. Also a transparent process should be followed at all times so that humanitarian agencies are aware of all major developments regarding safe and successful returns.

The speed and scale of the influx of refugees has resulted in a critical humanitarian situation. The vast majority of refugees are reliant on humanitarian assistance for food, shelter, health and other life-saving services. Despite this, most refugees are reluctant to go back since the situation and quality of life back home in Myanmar would be worse in comparison.

“We feel safe even if we leave the doors open, but back in Burma (Myanmar), even locking the doors failed to make us feel safe. We are able to live here with peace,” shares Fatema, 27 years old.

“We couldn’t move freely, we had difficulty even going to the market for basic supplies,” adds Elias, 22 years old.

CARE has been active on the ground since the early stage of the refugee crisis and directly reached nearly 250,000 people by providing support and services as to health and nutrition, shelter, water and sanitation, site management, protection of women and girls against gender-based violence (GBV) and distribution of food and non-food items.

“CARE’s work with refugees globally underlines the importance of ensuring that all returns must be based on well-informed voluntary decisions and international standards must be upheld at the time when a voluntary return of refugees becomes possible. Security must be ensured at the area of return before returns are commenced,” says Choudhury. 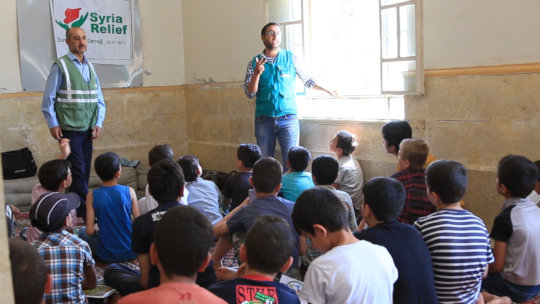 Hundreds of thousands of civilians are at immediate threat of displacement and their lives could be endangered by a large scale military offensive on Idlib. The area is home to 3 million people, two thirds of whom are already in need of aid. And nearly half of the population has already been displaced from other parts of Syria and lives in difficult conditions. They might not have a place to go, no refuge from bombs and airstrikes. If those men, women and children have to move again in search for safety, they will slip more into vulnerability and will be at risk of diseases, not to mention death. We could be witnessing a humanitarian catastrophe unlike anything we have seen in Syria since the beginning of the conflict.

CARE works in Idlib through Syrian organizations that have been our partners for years. Syrian aid workers are at the front line of the response, distributing much needed food and non-food items, clean water, clothes, blankets, cash, rehabilitating collective shelters, and extending psycho-social support to thousands of people in need. But CARE does not stop there. Since the start of the year, CARE and its partners have reached more than 300,000 people, extending support to the most vulnerable for their basic needs but also working with people to restore livelihoods, particularly agriculturally based ones, protect maternal health, and repair small infrastructure.

We are in the process of positioning stocks and assistance to respond to the immediate needs of 75,000 people at the onset of mass displacement. We are planning to distribute food baskets, ready to eat food rations, non-food and shelter items for newly displaced people, hygiene items, clean water and jerry cans, emergency latrines, cash, as well as providing psychosocial support.

CARE is at the front lines of the refugee crisis in Syria, and we thank you again for your generosity.  As we deliver on our mission by providing assistance, we encourage you to fight with CARE through your continued support. 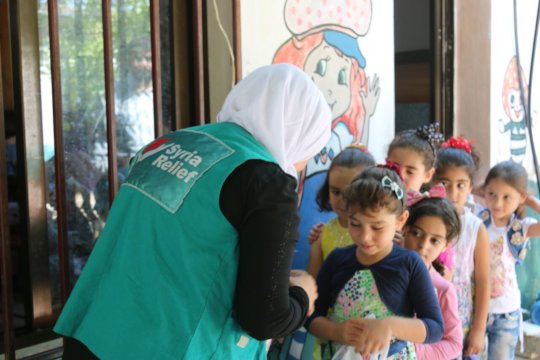 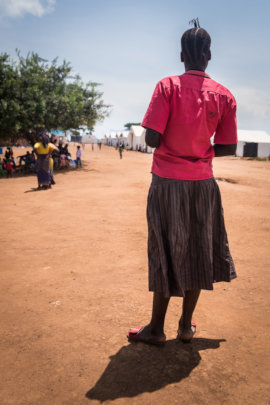 There are now 65 million refugees in the world today. Every minute, 24 people around the world are forced to flee their homes. That’s 34,000 people a day who leave everything behind in the hope of finding safety and a better tomorrow. Experience Regina's story written by Kerstin Blidi.  Because of generous donors like you, CARE is able to help the millions of refugees like Regina around the world.

"Regina arrived at Rhino Camp, a settlement of South Sudanese refugees in Arua district in north west Uganda, in July 2016. She had fled her home in Yei, South Sudan, with her five siblings and two of her children, the youngest only 2 months old.

Traveling without her husband, life has been difficult for Regina. “Being both a single mother of two young children and a refugee is challenging and at the beginning I did not know what to do. I did not know how to take care of the house and how to get food for my children,” she explains.

But things improved for Regina, and nowadays she earns a small income from knitting and embroidery. Regina joined a women’s group established by CARE. The group knits and sews together, and sells their products to both refugees and host communities in the area. Now Regina can feed her family and buy school uniforms for her children.

Each week, the women also put aside a little money as a special welfare fund to help if someone’s child falls ill and needs medical attention. While medical treatment is free, transport to and from the clinic requires money. The village saving and loan group, which is organized by CARE, also puts something aside to distribute as loans for new initiatives the women would like to try. In this group, women also do different activities together and discuss their well-being.

For Regina, the benefits are social as well as financial. Many of the forty women who make up the group are single mothers, alone in Uganda with their children. They meet every Sunday after church in order to knit, to sew, and to chat about issues that affect their lives including gender based violence.

This is the second time Regina has been a refugee in Uganda. Rhino Camp was her childhood home before returning to what was then southern Sudan when she was 8 years old. Her father died a year later leaving her mother to raise the family alone. Regina finished school and worked as an assistant at a local clinic. Thanks to her education, she also counsels her friends and colleagues at Rhino Camp, in an effort to reduce the stress and trauma experienced by many through their country’s war and the long journey to safety in Uganda.

Things have improved for Regina but she holds little hope of returning home to South Sudan soon. “With the money I earn, I would like to go back to school and extend my medical skills so that I can serve the community,” she says. “But I am not hopeful of going back to South Sudan. When there is war, there is no hope.”

‹ 1 ... 6 7 8 9 10 11 12 13 ... 29 ›
WARNING: Javascript is currently disabled or is not available in your browser. GlobalGiving makes extensive use of Javascript and will not function properly with Javascript disabled. Please enable Javascript and refresh this page.