For the third year in a row, Syria has remained the deadliest place to be an aid worker, according to an analysis done by CARE International. A devastating 57 aid workers have lost their lives since the beginning of this year, including 18 in Syria – the largest humanitarian death toll for the third year running - and where a war has been raging since 2011.

"Syria continues to be one of the most challenging places to deliver aid in the world. Syrian aid workers, who are at the forefront of the response, constantly put their lives on the line to deliver life-saving assistance,” says Nirvana Shawky, CARE’s Regional Director for the Middle East and North Africa.

“While the people of Idlib are wholly dependent on aid delivered to their communities, heavy artillery and shelling since late April has resulted in an unacceptable loss of life of humanitarian workers and the wider civilian population. All parties to the conflict must meet their responsibilities under International Humanitarian Law to protect all civilians, including aid workers, and ensure they are able to deliver vital assistance to people in need,” Shawky explained.

In the new report by Humanitarian Outcomes - an independent research organisation that provides global data on aid-worker security - national aid workers continue to bear the brunt of the violence compared to their international colleagues.

According to Des Clarke, CARE Afghanistan’s Country Director: “This attack reflects the increasing dangers of humanitarian work and the ever-present risk for aid workers across the country. Additionally, conflict as well as a drought-driven acute hunger crisis combine to negatively impact millions of Afghanis. As we mark World Humanitarian Day, we remain committed to our mandate whilst ensuring the highest obligation for our duty of care to our teams. Aid work by definition is dependent on aid workers,” Clark said.

The specific risks faced by female humanitarians are of great concern. Sexual violence against female humanitarian workers occurred in eight percent of violent attacks last year, according to findings by Humanitarian Outcomes. But the number of reported incidents – just 21 since 1997 – suggests that both victims and organisations may be vastly under-reporting the problem.

Rosalind Crowther, CARE South Sudan's Country Director says: "Throughout the world, women play a vital role in every aspect of crisis response, and particularly in preventing, responding to, and working with survivors of gender-based violence

“South Sudan continues to experience the greatest number of major attacks on aid operations and we know that every time the rules governing fighters’ conduct in war are broken, human suffering intensifies. Ultimately, attacks on aid workers hurt the world's poorest,” Crowther continued.

UPDATE: Tens of Thousands of People in North-East Syria at Risk as Winter Approaches 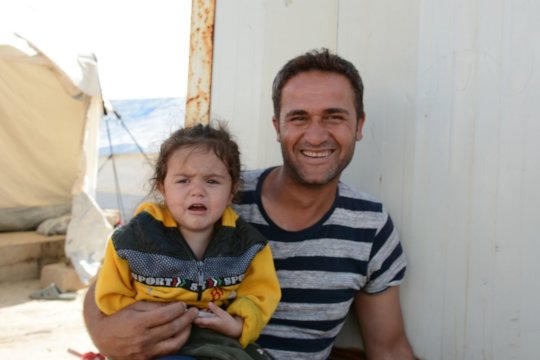 As temperatures plummet across the Middle East, CARE warns that tens of thousands of people, including women and children, in north-east Syria are at risk of facing harsh weather conditions without needed protection. Over 100,000 people are still displaced, out of which more than 15,000 are living in collective shelters, according to the United Nations, with few possessions or clothing, making them more vulnerable as the winter approaches.

“Many of the places where people are sheltering are old schools, unfit for hosting displaced families. Doors and windows are broken and there is nothing to shield people from inclement weather. The poorest, who are going to collective shelters, only have the clothes they are wearing and, sometimes, a small amount of money that is only enough to buy them food for a few days,” says Aleksandar Milutinovic, CARE Syria Country Director.

The influx of displaced populations into Hassakeh City has resulted in a shortage of available places for rent. The ones left are overpriced, which most cannot afford. Many families have stayed with relatives, but report that after a while, they have no other choice, but to go to collective shelters because of the expense and loss of privacy the hosting families have to bear.

“We are distributing winter clothes for children, mattresses, blankets, floor mats and plastic sheeting that people use to block the cold wind, but these do not come close to covering the huge needs. Some of the classrooms have been deserted without maintenance since the war started, and are in need of rehabilitation. We have had rainfall over the past week and with open doors, broken windows and no carpets or blankets in collective shelters, these buildings are cold,” says Baran*, an aid worker for CARE in northern Syria.

The lack of maintenance has also meant that collective shelters do not have functioning water and sanitation facilities, leading people to have to leave their shelters in search of these facilities. They sometimes go to mosques, while other times, people have opened their homes for the displaced to use the toilet. This practice poses a safety risk to women and girls, who sometimes have to walk distances by themselves at night.

While most winter clothes distributions by humanitarian actors have thus far focused on children as a priority, women and men are also in need of warm clothes, having quickly fled their houses in light clothing when the military operations began in early October.

“There is a shortage in fuel in the area and kerosene heaters, which are what most families use in the winter because of their affordability, are now unavailable. People are unable to pay for fuel to keep them and their families warm and there are many women and small children among the displaced. There is an urgent need to provide winter clothes, heaters, fuel, and cash distributions for the winter,” Baran adds.

*Names have been changed to protect identities.

New findings by the UN Refugee Agency’s Global Trends report show that the world’s developing regions are hosting 84 per cent of all refugees. According to the UNHCR’s latest figures, Germany is the only European country in a list of the top 10 refugee host nations, meaning some of the poorest countries in the world carry the heavy burden of a growing global refugee crisis.

“We have a small number of poorer countries who have been left to do far too much just because they are neighbours to a crisis. This unequal share is exacerbating the global refugee problem, as inadequate conditions in host countries are pushing many to embark on dangerous journeys while women, girls and other vulnerable people are put at risk to abuse and exploitation. We would like to see the wealthier countries taking more responsibility by increasing financial support to countries that welcome high numbers of refugees; as well as offering safe asylum and resettlement options to vulnerable groups,” she explained.

Data from the Global Trends report shows that the number of people fleeing war, persecution and conflict exceeded 70 million in 2018 - the highest level that the UNHCR has seen in its almost 70 years.  Findings also show that the proportion of women and girls in the refugee population was 48 per cent in 2018 while children represented about half of the refugee population.

“I was recently in Jordan – a country that hosts the tenth largest refugee population - and the second largest relative to national population with 72 refugees per 1,000 people. In Jordan, it is clear that enabling refugees’ access to labour markets will not be easy. Like Turkey and Lebanon, which are among the highest refugee-hosting countries in the world, due to the crisis in Syria, Jordan has a weak economy and high unemployment levels. This forces refugees to seek employment informally, increasing the exploitation and the aggravation of refugees’ precarious situations – especially women and girls,” she noted.

CARE International experts have warned that the Syrian refugee crisis could grow exponentially worse following the recent surge in violence.

Michael Fuhrer, CARE’s Managing Deputy Regional Director for the Middle East and North Africa, said: “The Syrian conflict has caused the largest displacement crisis in the world. Hosting 5.4 million Syrian refugees has caused great strain on countries in the region for the past eight years. To tackle the protracted nature of displacement and its consequences on both refugees and hosting countries, we need to think beyond the humanitarian response and support long-term, strategic solutions for Syrian refugees, even though Syria faces an uncertain future.”

Aid agencies and authorities in Uganda - the largest refugee hosting country in Africa- are also facing enormous challenges in maintaining and stabilising existing services for refugees from neighboring countries faced by conflicts in East Africa.

Delphine Pinault, CARE International Country Director in Uganda, warned that a lack of support for host communities could reduce their willingness to share land and resources and increase tensions between communities.

She said: "In 2018, only 57 per cent of Uganda’s Refugee Response Plan budget was funded. The contributions in 2019 are not even reaching 20 per cent of the necessary funds. If the funding does not increase urgently, the consequences could be drastic, with more children out of school due to cuts to education programmes. We are also noticing a lack of capacity to prevent communicable diseases such as Ebola; worsening sanitary conditions and adverse impacts on environment. Additionally, we are particularly concerned about the minimised response to Sexual and Gender-Based Violence which is exacting a heavy toll on women and children, who account for 83 per cent of the refugee population," Pinault explained.