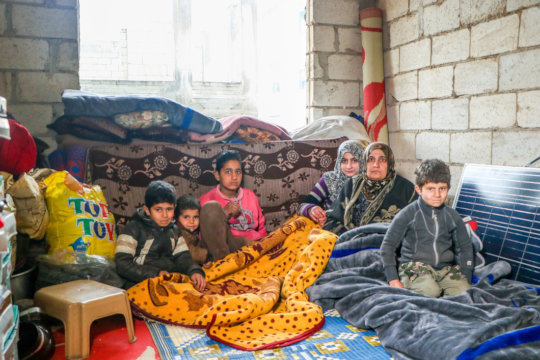 Nesreen and her children. IHSAN/CARE

Syrians who have already endured almost a decade of war and displacement are now facing unprecedented levels of hunger leaving millions of people acutely vulnerable to Covid-19, international agencies warned today ahead of a key annual conference on the crisis.

Covid-19 restrictions, the collapse of the Syrian pound, and the displacement of millions of people have led to an unprecedented number of families in Syria who are no longer able to put food on the table or make enough money to afford basic necessities. A staggering 9.3 million Syrians are now going to sleep hungry and more than another 2 million are at risk of a similar fate – part of an overall rise of 42 percent in the number of Syrians facing food insecurity since last year.

Hosted by the EU and the UN on 30 June, the Brussels Conference aims to raise funds and agree on policy changes that will help Syrians inside the country and in the region. The agencies Oxfam, Humanity & Inclusion, CARE International, World Vision International, International Rescue Committee, Mercy Corps, and the Norwegian Refugee Council warn that unless funding and humanitarian access are increased, many Syrians, including those living as refugees in the region, will be pushed to the brink of starvation. Almost a decade of war has thrown Syrians into a spiral of despair and destitution that keeps worsening every year. International assistance is needed now more than ever.

In the northwest, a Turkey-Russia mediated ceasefire faces a bleak fate, with fighting and aerial bombardments reported since May. Home to over 4 million people, many of whom have been displaced multiple times, Idlib and northern Aleppo governorates face a potential catastrophe if there is a Covid-19 outbreak. Many live in squalid makeshift overcrowded camps or sleep out in the open. Water is scarce, and the health and civilian infrastructures are decimated. In recent weeks, a new wave of violence in southern Idlib has forced hundreds of families to pack up their few belongings and leave their homes and tents once again.

In the northeast, the first cases of Covid-19 were confirmed over a month ago, and with it concerns over a lack of preparedness remain high. Lack of Covid-19 testing capacity, chronically understocked health facilities, and the main water pumping station - servicing 460,000 people - regularly being out of commission, continue to be the daily reality. Like in the northwest, taking measures to prevent the spread of Coronavirus is especially difficult in the many overcrowded camps and informal settlements across the region.

In government-held areas, as in neighbouring countries hosting refugees, Syrians are facing the reality that the threat of Covid-19, the inability to work and the spiraling economic decline in the region is making their situation harder than ever.

International agencies are calling on global leaders to scale up financial support in comparison to previous years for Syrians in their country and those displaced in the region so that they can have a chance not only to survive, but to rebuild their lives in safety and dignity. We also call for the United Nations Security Council to renew the Syria cross-border resolution for northwest Syria for a period of 12 months and to re-authorize access to northeast Syria to ensure that vulnerable people are able to receive lifesaving assistance. More access to those in need is crucial right now so that the humanitarian community can support families as they struggle through the pandemic and the economic crisis that is sweeping across the country.

Americans can make a difference right now – there is no better time to give. Syrians are in urgent need of support from the international community, and increased funding will make the difference between life and death for hundreds of thousands of innocent children and families. Start helping Syrians today.

UPDATE: Support Syrians on the Run

Washington, D.C. (February 25, 2020) – The Global Emergency Response Coalition announced today the launch of an emergency appeal to help Syrians currently experiencing life or death conditions. The lives of nearly 1 million people have been uprooted in Northwest Syria over the last three months, an escalation of a nearly decade-long conflict. Syrians urgently need our help – children are dying from extreme cold and families are out of options. The Coalition is imploring the American public to donate to help save the lives of children and families.

An alarming situation has unfolded in Northwest Syria since December. Over 900,000 citizens have fled continued violence – many multiple times – but closed in by shuttered international borders on one side and the ocean on the other, families are stuck in an increasingly dangerous and desperate situation. This is one example of many among one of the largest humanitarian crises of our time -- Syrians have endured continued violence, deteriorating living conditions, inadequate health care, destroyed schools, and human rights violations for nearly a decade.

“We must do everything in our power to save the lives of Syrians in distress,” said Gwen Young, Managing Director of the Global Emergency Response Coalition. “Winter in Syria is especially brutal as temperatures plunge below freezing – people are dying from abnormally cold weather that is exacerbating already extreme conditions. Some 80,000 people are living outside, exposed to the elements and lacking the shelter they so desperately need for protection.”

Women and children are bearing the greatest brunt and make up over 80 percent of the displaced individuals. They are enduring disproportionate levels of suffering, including gender-based violence and malnutrition, both intensifying along with harrowing conditions on the ground.

The Coalition, including CARE, International Rescue Committee, Mercy Corps, Oxfam, Plan International USA, Save the Children, and World Vision, first joined forces in 2017 to bring attention to and increase funding for the East Africa Hunger Crisis. In 2019, the Coalition relaunched to help save more lives by inspiring donors in the United States and quickly getting them involved when disasters strike. Right now, the Coalition’s members are on the ground in Syria working together and with local partners to provide immediate assistance, including basic needs like shelter, food, water, and protection.

“The humanitarian system in Syria is already strained and desperately in need of additional international aid and support,” explains Young. “Our unique partnership leverages each member’s strengths and amplifies efforts to deliver stronger results. Collaborating and coordinating to raise funds and support for Syrians inside and outside of the country ensures that children, families, and communities at risk receive the lifesaving assistance they need.”

Americans can make a difference right now – there is no better time to give. Syrians are in urgent need of support from the international community, and increased funding will make the difference between life and death for hundreds of thousands of innocent children and families. Start helping Syrians today.

CARE International called on world leaders to seize the opportunity of the first-ever Global Refugee Forum to deliver bold new solutions to uphold the human rights of refugees and support the communities generously hosting them.

"The Global Refugee Forum provides a first critical test of world leaders' intention to bring about a more sustainable and rights-based approach to the way we respond to the needs of refugees," said CARE Canada's Vice President for Global Partnerships, Jessie Thomson.

"The brunt of these crises is too often born by women and girls and other vulnerable groups who are frequently left in limbo for decades, with no solutions in sight. For the first time in years, we have an opportunity to transform the way we respond to the rights and needs of refugees, but we need the political will of governments around the world to deliver on the ambitions set out in the Global Compact on Refugees."

The Global Refugee Forum was hosted by the United Nations Refugee Agency in Geneva from 17-18 December, and was attended by states, international organizations, refugees, civil society, the private sector, and experts. It was the first global conference since the adoption of the Global Compact for Refugees in December 2018 – a global deal that promotes greater international cooperation in support of refugees and the communities that host them.

85 per cent of the world’s 70.8 million displaced people are in developing countries already struggling with resource constraints and inadequate public services. Amid increasingly prolonged conflicts around the world and increasing incidence of permanent displacement due to factors related to climate change, the length of time a refugee spends in exile often stretches over decades.

"No one chooses to be driven from their home and community," noted Thomson. "Next week, world leaders face a historic opportunity to continue the shift towards a more sustainable and collaborative approach that can enable displaced people realize their rights, regain their self-reliance, and support the communities that have generously welcomed them."