BACK TO WORK WITH NEW BIKE DESIGNS AND PROSPECTS 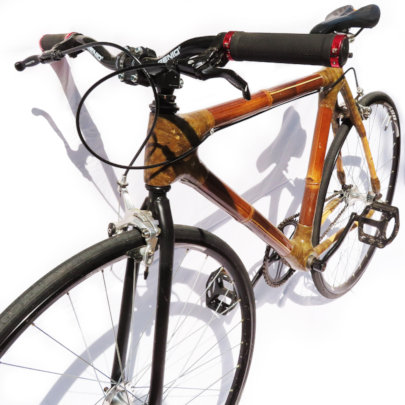 We’re pleased to advise that we reactivated our Bamboo Bikes Social Enterprise appeal at the end of October and during the last 3 months, our local team of artisans, led by our amazing bamboo bike designer, Deni Nugraha, have designed and built 3 new bamboo bike models: Balance bike, BMX and single-speed (fixie) road bike. We’ve been lucky to have a very talented volunteer French Mechanical Engineer, a professional in CAD-Geometrical modelling design, who has created all our designs in detailed computer illustrations in all views, including 3-D isometric views.

Whilst we’ve only sold 10 bikes in the last 3 months, 2 of which were hand carried to UK and 5 shipped to Bandung in West Java, where they are being fitted with electric motors as part of a government trial for Denpasar City, we recently had a visit by some senior Indonesian Government officials from Jakarta who toured our bamboo bike workshop and were very impressed with the high quality and unique aspects of all of our bikes, accessories and small bamboo handicrafts. We do expect that this visit will result in further communication from relevant government departments and do hope for Indonesia-wide exposure!

We are presently in the process of recruiting a qualified marketing and communications professional who will take a major role in promoting our bamboo bikes and unique handicrafts, not only in Indonesia but also internationally, as we presently have serious enquiries from the UK and USA.

We are still in urgent need of ‘seed’ funds to support our marketing and sales staff and build up a stock of bikes wit the target of developing high sales demand so that we can rapidly train more local graduates and other unemployed youth as top level bamboo artisans with the potential to develop small community owned bamboo businesses whilst still in the East Bali Bamboo Bikes team. 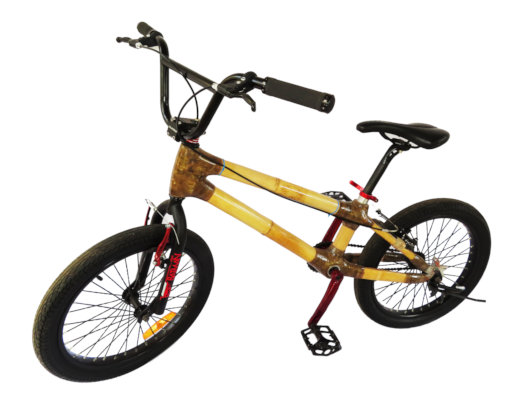 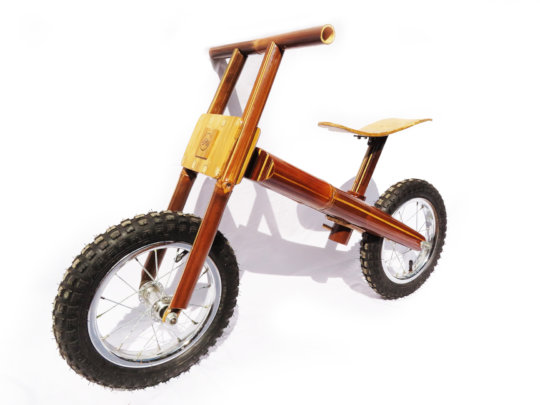 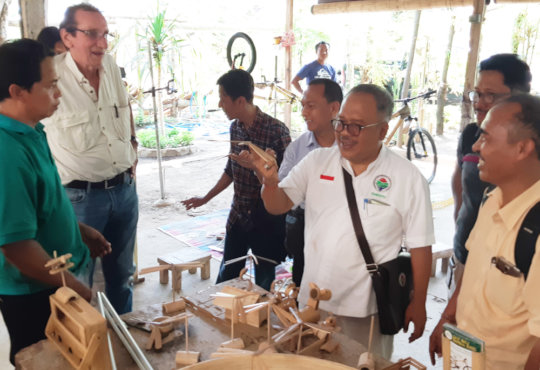 Government visit to see our other bamboo products 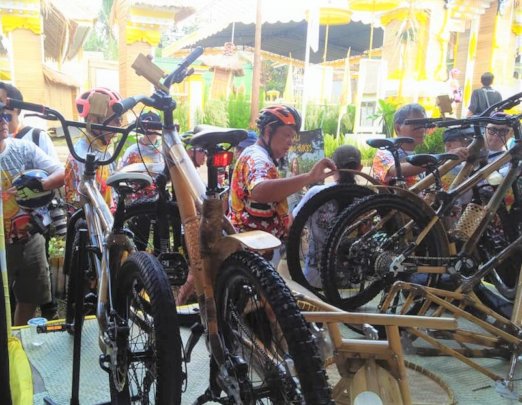 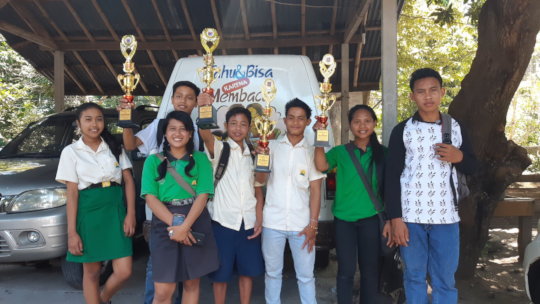 On 30th October, 8 of our studentscompeted against 128 other students from Karangasem Regency schools inIndonesia’s Literacy Day 2018 competitions,held by the EducationDepartment ofKarangasem Regency in Amlapura, the capital city.

The students were so excited to participate in this competitions and the most important thing is this event can help them to broaden their knowledge and experience and motivate them to always put their best effort in every occasion, and they can have fun – and next time come FIRST!

We are almost at the end of the first school semester (December) where our students will have a chance to challenge themselves in the First Semester exam, doing the best to prove that they have studied hard and learnt well for the past six months.

Our teachers are now preparing the exams. The resultswill help the teachersto evaluate the students’ performances & achievements and give extra tuition where needed.

One of our teachers said, “We always give our best effort to encourage students and to optimize their potentials; the exams help us a lot to monitor and evaluate our work, since we value process, we believe in the students’ hard work and we always appreciate whatever the results are. Our students always have high motivation, that is what we really want to support”

Did you know that the 27th November is GivingTuesday? Have you decided the charity you want to donate to? Consider us! At this annual event, GlobalGiving is dividing $150,000 in matching funds among its Nonprofitpartners. Please donate now to help us get a bigger share of the matching funds – and double your donation! 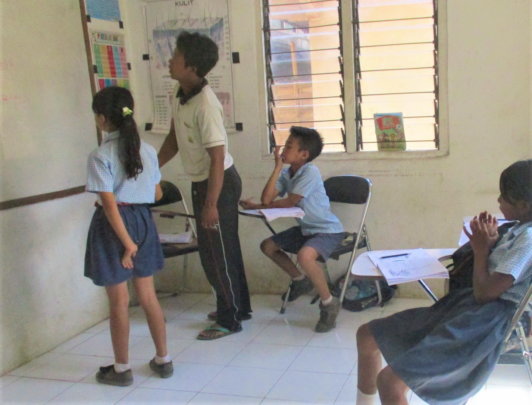 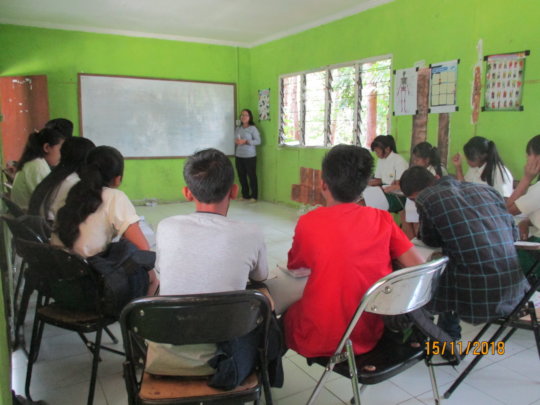 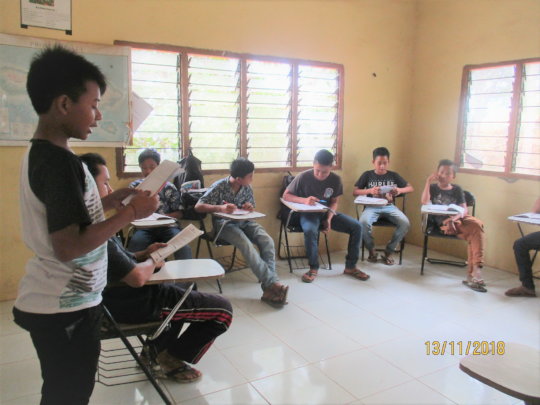 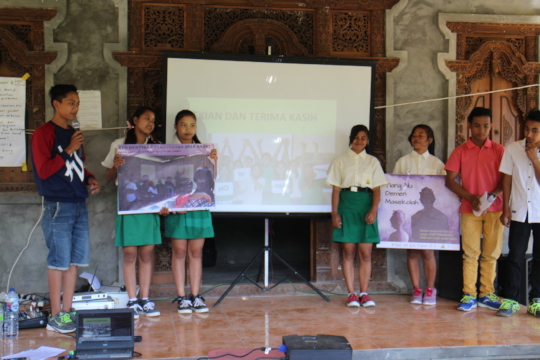 Students presentation about school drop out

In the last few months, all EBPP students have been busy with their school activities, and we are proud that all students who took the national examinations passed with good marks, giving all other students enthusiasm to continue their studies at a higher level.

In addition to academic subjects, they also have many extra-curricular classes, their favourite being EMpower Spark & Ignite lessons when all junior and senior high school students learn and discuss about traditional gender norms, gender equality, patriarchy, sexual harassment, school dropouts, early marriage and its effects. After six months of study, discussion, brainstorming and interviews with their community members, they held a campaign by organizing a presentation attended by the local community and some local government representatives from various offices. In the presentation, students presented the results of their campaigns to tackle the existing problems young people face, such as sexual harassment, dropping out of school due to marriage and gender equality. In addition, they also formulated school regulations on sexual harassment which are expected to reduce or even eliminate sexual harassment that occurs in schools. In this campaign, students used several media such as PowerPoint presentations, posters, videos and songs to deliver their messages to the public. All media campaigns came from themselves with a little help from the teachers. This media was also quite successful in conveying the messages; especially their own-written song entitled "Stop Harassment", which many people and children imitated after the presentation ended.

In addition to Spark & Ignite lessons, the junior and senior high school students also had their EMpower course, where the key topics for the last 4 months focused on Microsoft Word, Excel, Power Point, Internet, Career Orientation and Reproductive Health. The topic that most interested the students is the Career Orientation Program by making a field visit to a cashew factory (East Bali Cashew) and a Resort (East Bali Immersion) located at the northern side of their village. They were very enthusiastic about participating in all these activities, evidenced by 100% attendance and their many questions and discussions in the lessons after their visits.

In addition to their academic and EMpower classes, they were also preoccupied with the preparation for EBPP annual celebration of Indonesia's Independence Day which is celebrated on 17th August every year. This year’s celebrations were very lively, with 22 Pengalusan students performing the traditional Balinese dance: "Jangger collaboration" and 6 others presented traditional dance "Gopala". After that, they sang songs entitled: “The Pain of Evacuating our Homes (related to the 5 months of evacuation during Mount Agung eruptions)”, “Our Home” and “Thank You”, a special song written and composed by EBPP students and teacher collaboration to thank our wonderful donors, without whom they would not even be getting an education. Meanwhile, four Jatituhu students performed a traditional Balinese dance called “Puspanjali” and twelve students presented a song called “Indonesiaku (My Indonesia)”. In addition to the creativity arts activities, there are many physical competitions where several students from all 6 EBPP schools compete, such as tug-o-war, completing maps, coin hunt, etc. All these activities were very entertaining to the community, the students and the local audience of about 200-300 people.

On August 5th and 9th, another catastrophe struck. Earthquakes with RS magnitude 7.0 and 5.9 respectively, centred on the sea of Lombok! These had devastating impacts on the village of Ban. More than 350 houses and temples were damaged of which 133 houses were totally destroyed, 20 of which were in Jatituhu and 4 in Pengalusan. This incident saddened all of the Pengalusan and Jatituhu students whose houses were destroyed by the earthquake. To help the community, EBPP, once again conducted fundraising, to build temporary housing so that the community have a little comfortable place to stay until they get government assistance to build new homes. GlobalGiving kindly donated $5,000.

Although many natural disasters have occurred, the Pengalusan and Jatituhu students’ spirit of learning never faded; in fact they and their communities showed great resilience. They are very grateful to get help from all the donors, as learning and continuing school is a must for them. Thank you to all the Global Giving donors for helping us. Without your help these motivated children cannot continue their studies at school like now. 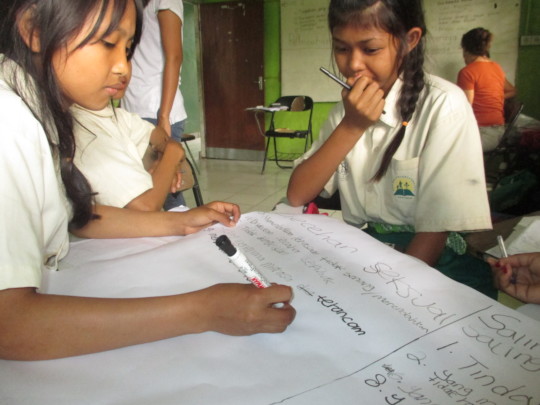 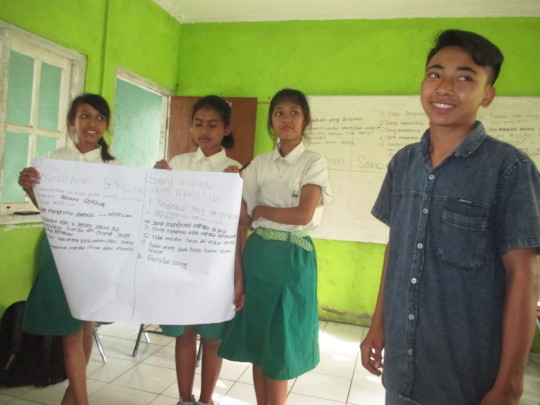 Showing what they think about sexual harassment 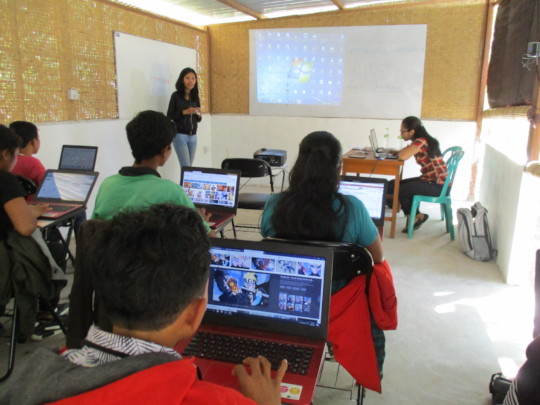 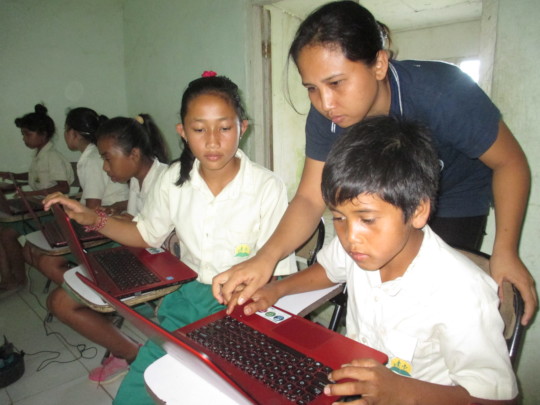 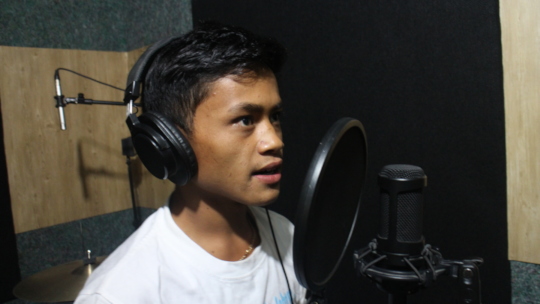 Song recording to deliver the messages to public 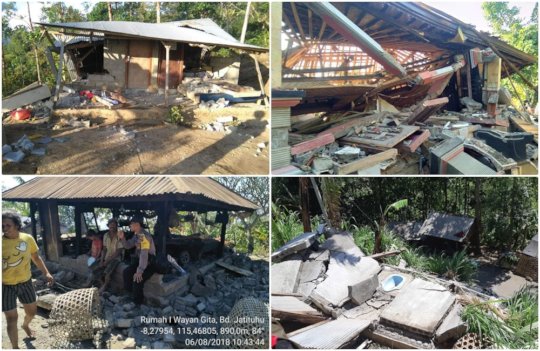 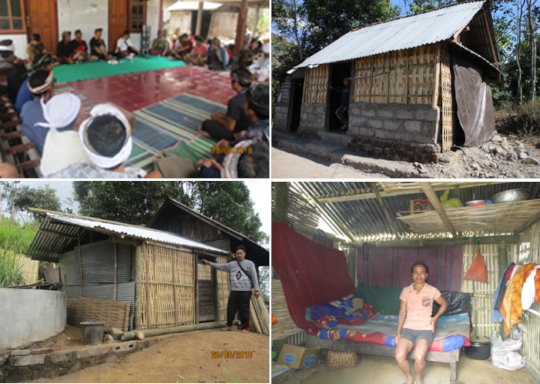 Temporary homes for earthquake victims
‹ 1 ... 7 8 9 10 11 12 13 14 ... 18 ›
WARNING: Javascript is currently disabled or is not available in your browser. GlobalGiving makes extensive use of Javascript and will not function properly with Javascript disabled. Please enable Javascript and refresh this page.