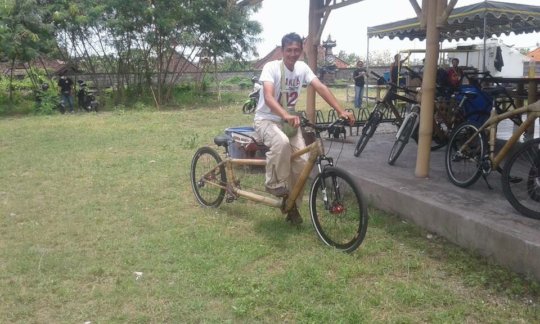 Just over 2 weeks after our last report, violent earthquakes and tremors in the earth’s crust below Mount Agung indicated an imminent eruption of the Agung volcano, resulting in the government instructing on 21st September that all those living within a 12km radius of the volcano, which included all of the 19 hamlets in our village of Desa Ban, evacuate immediately to safer locations. Our Daya Bamboo Workshop, only 6km from the crater, was immediately evacuated and all our tools and equipment loaded onto the back of our pickup trucks and taken north to our relocated EBPP HQ at the Tianyar Timor house of Komang Kurniawan, EBPP Chairman and Team Leader, 15km from the crater, near the Amlapura-Singaraja coast road. The attached photos show our team moving the large copy lathe, also given a temporary new home at Komang’s house.

Fortunately, on the 3rd of October, our bamboo bike building was able to resume in a borrowed EWABI workshop in Canggu, just 4km from EBPP Denpasar office, as six of our Bamboo Bike team, who are from Pengalusan and Cegi hamlets (located on Mount Agung slopes 2,000 metres below the crater), evacuated their families to Government camps in Gianyar and Denpasar, and were eager to work! Deni Nugraha, our Bamboo Bike Team Leader, restructured the team, collected all the equipment needed from East Bali and the team continued building bamboo bikes!

After completing five bamboo Mountain Bike (MTB) frames for EWABI, our team built a bamboo tandem bike, designed by Deni and ordered by EWABI, which when completed was ridden around some of the key Denpasar landmarks to promote bamboo bikes, as shown in the photos.

Following the tandem, our bamboo bike team started initially building MTB’s which we will market and sell under our Vebacon social enterprise company, branded as “East Bali Bamboo Bikes”, and promote on our new website, (presently under construction), with orders already coming in from a UK customer, who will promote in England later this month and also a potential order from an Australian cycling club, who have asked for bamboo ‘city bikes’, which we are presently building. The key difference between the MTB and the city bike is the gears, whereby most city bikes are single speed, and the first we have built includes a small bamboo luggage rack at the rear, as shown in the photo.

Mount Agung Eruption Update: Mount Agung started erupting on 25th November with huge ash and gas clouds reaching as high as 7,000 metres above the 3,142 metres crater, prompting further immediate evacuations, due to the dangers of the ash falls and many lahars (thick cold volcanic ash slurry gushing down dry riverbeds throughout our village) for communities which had been allowed to return home on the 29th October. Whilst our team continues living with the uncertainties of if/when they will ever be able to go home, they continue building bikes in Canggu/Denpasar and hope that bamboo bike sales will increase their income so that they can offset the huge losses they have incurred due to rapid sale, at less than cost price, of livestock to save the lives of these helpless animals and income from cash crops, which are completely lost.

We sincerely thank all of our GlobalGiving donors who have helped make our community-based bamboo business vision a reality and hope you will join us in further developing the bamboo bike and other businesses to empower our Desa Ban communities, which we hope will very soon be led by EBPP schools high school graduates and foresee, depending on the Mount Agung situation, the bamboo bike business expanding to all of our communities. Towards this end, we are updating our “Build a Bamboo Workshop” campaign to seek seed funding for our Social Enterprise where all profits will support EBPP field activities, not only bamboo projects, but also for total community empowerment through bamboo based livelihoods business development. 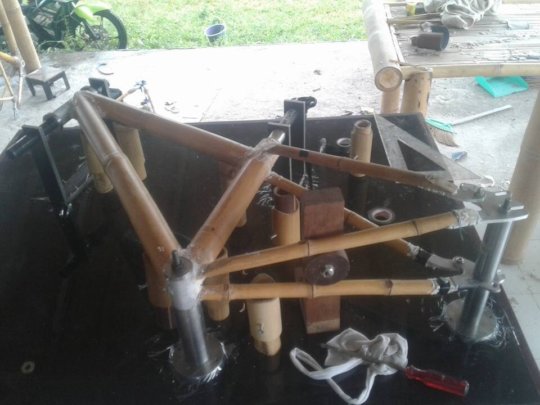 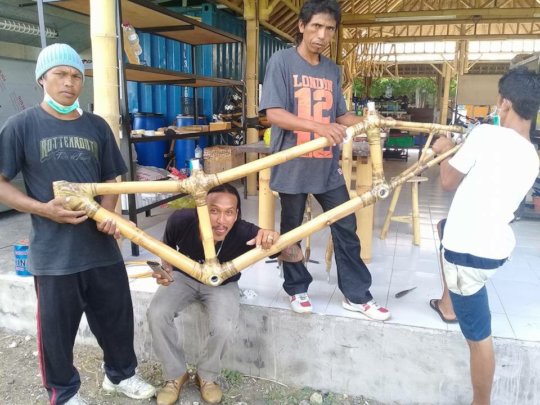 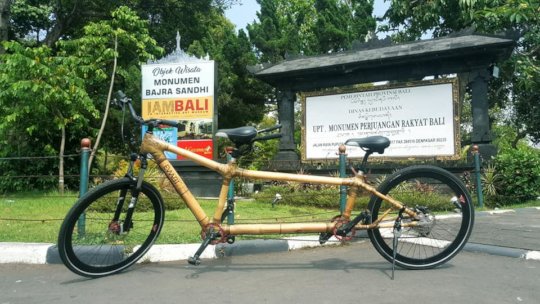 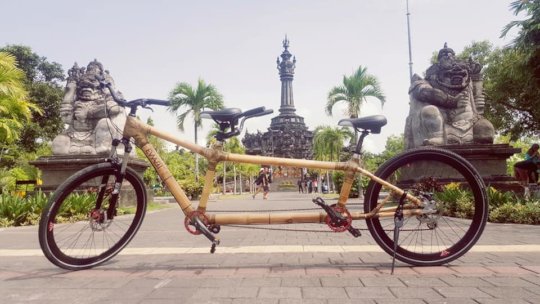 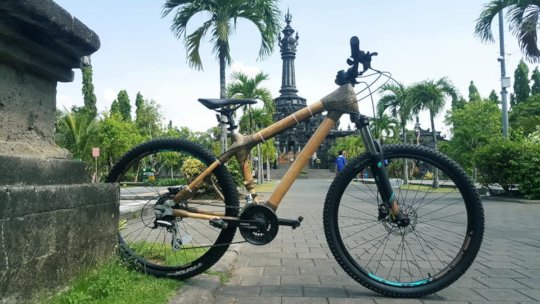 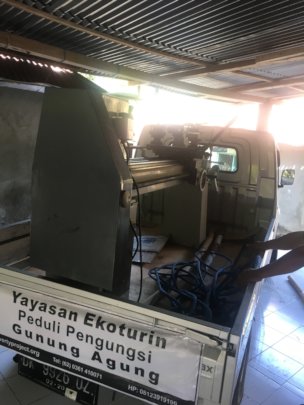 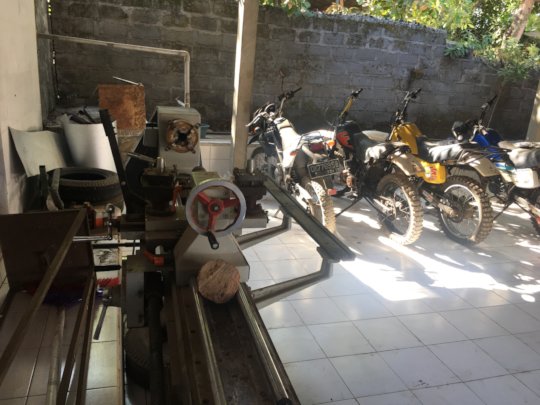 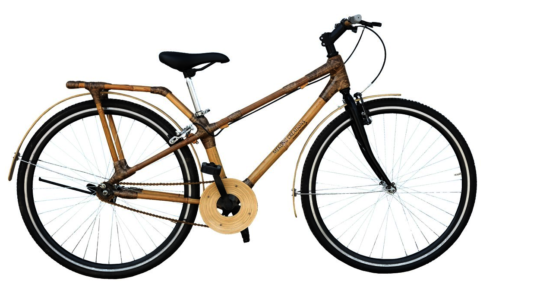 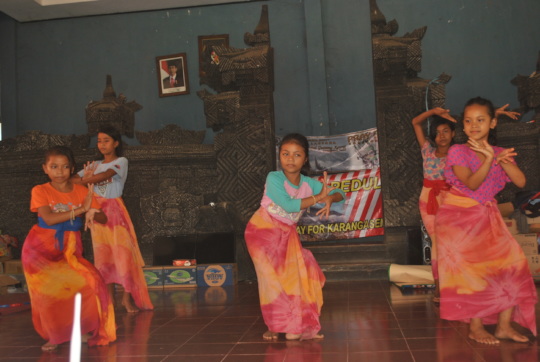 With the pride and excitement of the festive celebrations and Jatituhu students’ achievements in competitions and on stage during our Indonesian Independence Day event still resonating in Jatituhu community, the children all got down to more serious studying at school at the end of August, with some of our GlobalGiving sponsored primary students now in junior high school.

The happy atmosphere in Jatituhu abruptly turned to fear on the 13th September when Mount Agung (one of Indonesia’s dozens of active volcanoes) started rumbling and the government announced the danger level of Mount Agung had risen to II (alert) from I, meaning there was a potential threat of eruption. Living only 9 kilometres from Mount Agung crater, minor earthquakes were not unusual, but this eruption alert drove panic into the communities, with elders recalling the devastation of the last Mount Agung eruption in 1963, when they’d no roads, transport or communication.

The government advised all the 19 Desa Ban communities to be ready to evacuate if the threat level increased. Five days later, on 18thSeptember, they raised the alert level to III, standby, causing worry and confusion as they saw clouds of thick black smoke coming from the crater!

On 22nd September, after continuous and stronger Mount Agung earthquakes, at exactly 8.30pm, the alert level was raised to IV, indicating an imminent eruption, and everybody living within 12km of Mount Agung crater, including all the residents of Desa Ban, were ordered to immediately evacuate to safer locations. All the people were confused; they didn’t know where to run or what to do! This grave and urgent situation caused panic and all the Jatituhu residents just ran to unmade public roads and followed their neighbours down the mountain slopes, arriving a few hours later at emergency shelters prepared by the government in the adjacent regency of Buleleng, over 35 km from Jatituhu School. The next day, reality set in and, apart from the worry of leaving all their possessions at home during the panic exodus, their main concern was for their livestock of cows, pigs and goats left in their pens; as we know, their animals are their only wealth at home so they had no alternative but to go back home to take care of and feed them!

The difficulty of living in refugee camps was a new experience for our students and to fill their spare time, Jatituhu students took the initiative to entertain other refugees by performing Balinese cultural dances."We are very proud of the students of Jatituhu; although they are struggling in the refugee camps, they also have the initiative to entertain others," said the government committee at the refugee camp. Our students also enrolled at the nearest schools from their refugee camps during the evacuation period. EBPP team regularly monitored and gave the necessary assistance to make sure all our students can attend to the schools to continue their education

After a month, on October 29th, the government declared the earthquake activity at Gunung  Agung had dropped dramatically, and lowered its status from level IV to level III, permitting the people living outside the radius of 7.5 km from Gunung Agung, including Jatituhu, to go home! Nevertheless, all people are to remain vigilant, because at any time, the status could rise again – and erupt without warning.

Coincidental, two days preparations could begin for Galungan Day, which falls on November 1st, and Kuningan Day on 11 November, the most important religious ceremonies for Hindus in Bali. During this period, the schools took 2 weeks off for the ceremonies, which also gave time for EBPP team to prepare everything to restart our schools activities on 13thNovember. The EBPP team started to clean up the offices in Dusun Ban which had been abandoned as it was in the hazard zone, as well as moving the office equipment from the temporary office, at EBPP Chairman’s house in the adjacent village of Tianyar Timor during evacuation period.

Now, starting this week, 13th November, our 12 sponsored students and other Jatituhu School  students can return to study as before. Even though the situation is still on alert status, with frequent earthquakes, all the students are highly motivated and aspire to be successfully continued to higher education and hope the knowledge they gain can be beneficial and can bring a better future for all the residents of Jatituhu. 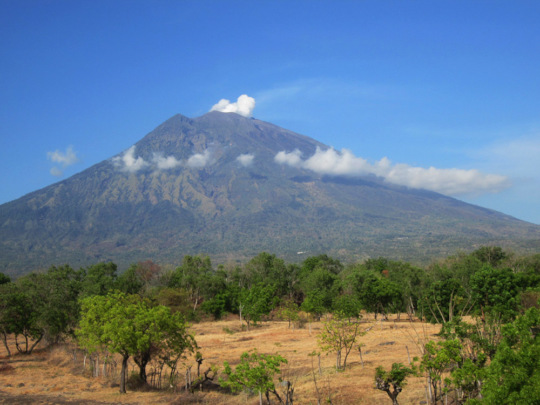 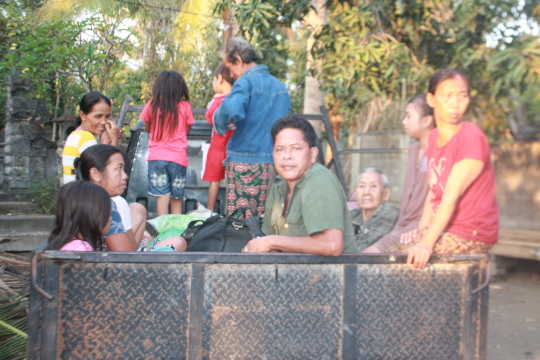 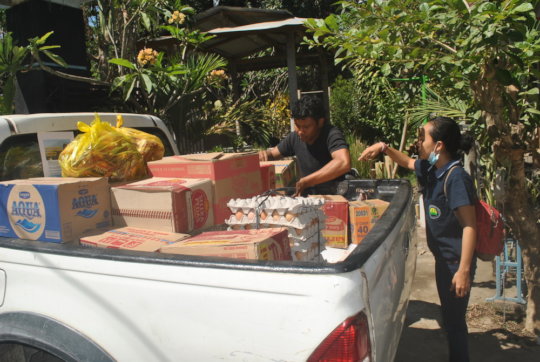 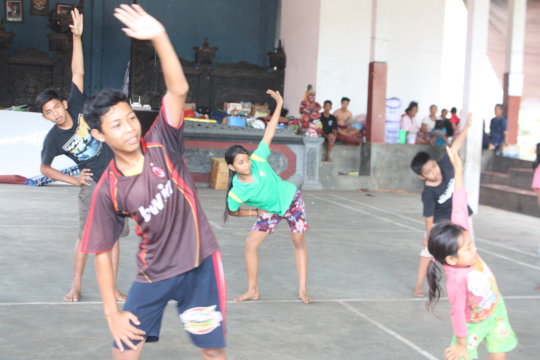 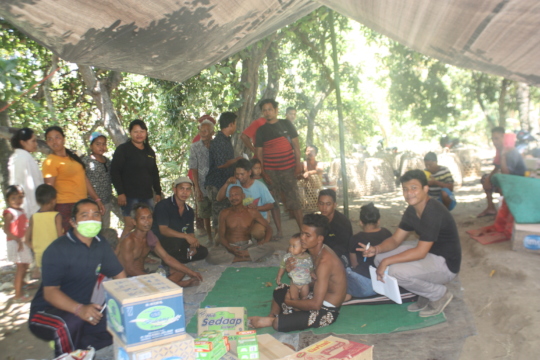 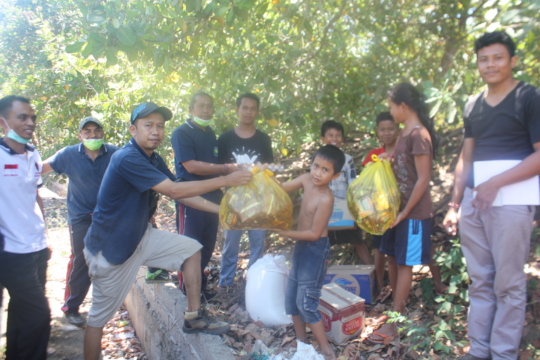 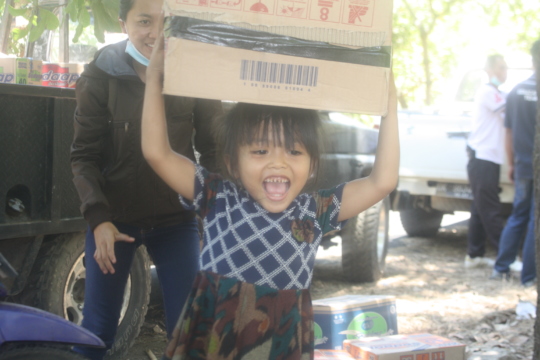 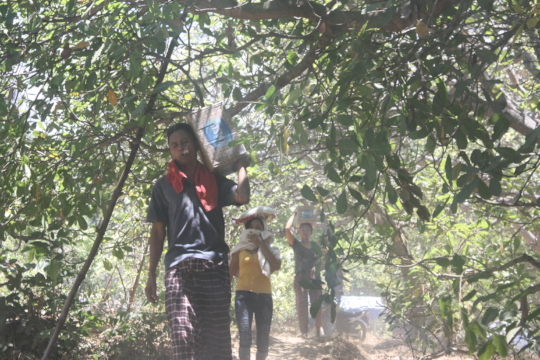 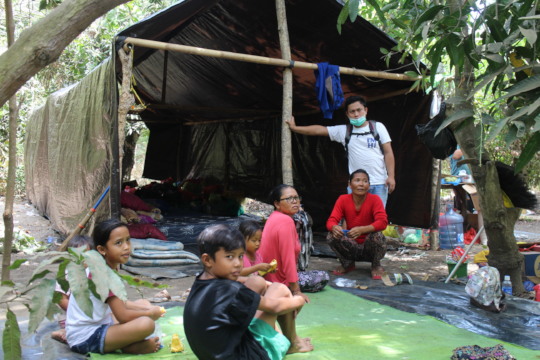 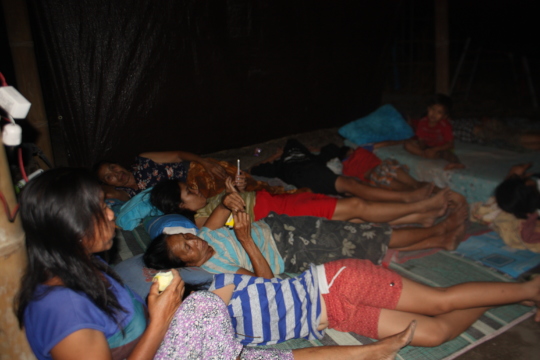 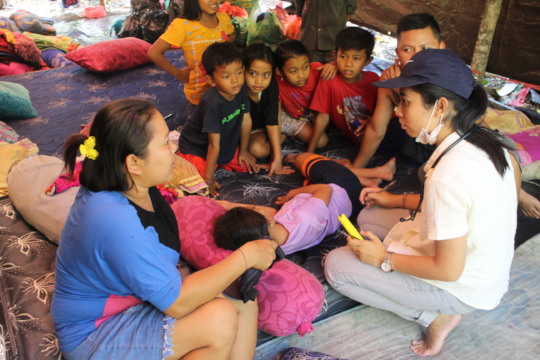 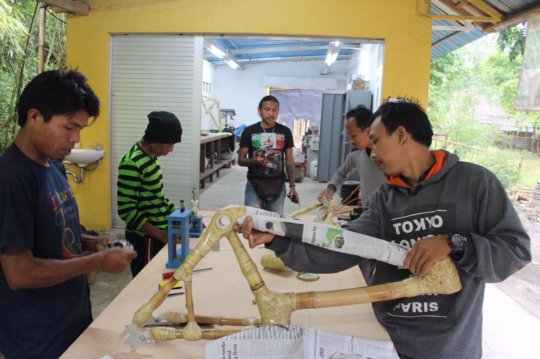 In recent months, our bamboo workshop has been developing towards full capacity, operating six days most weeks, with our bamboo bike building team now increased to 9, with the addition of 2 EBPP high school graduates from our Cegi School class of 2011.

Below is an overview of the bamboo workshop developments to improve the quality and capacity for producing bamboo bikes and other bamboo products, including new facilities added and additional resources needed.

A key essential for all bamboo poles before use is to ensure that as soon as harvested, they are cleaned and treated to preserve the bamboo and prevent termite infestation, and then dried to a moisture content of 6-8%. Here was where we experienced difficulties due to our often very humid and cloudy days at our Daya Bamboo Workshop area. I should clarify that Daya, at an elevation of about 950 metres above sea level, is in the valley between Mounts Agung and Abang, with temperatures that can range from an overnight low of 12 degrees Celsius to a high of 32 degrees in the same day, and due to its valley location, has quite high humidity and gets more rain and cloud than the remaining 18 hamlets of our mountain village.

To solve this problem, we built a 4m x 6m ‘drying room’ from matt black painted corrugated zinc sheets to absorb the heat, built pallet-type drying racks inside to stack the bamboo and installed a dehumidifier with fans at the rear to absorb the humidity and increase the temperature – resulting in achieving the desired moisture content of the cut bamboo poles after treatment in a just a few days – whereas before building the drying room, it could take weeks and not achieve the low moisture content required. Now, we can dry the bamboo and maintain the appropriate moisture content until the poles are needed for the next bike!

Our bamboo workshop team can now produce more bamboo bike frames each week but not enough! The main time consuming factor is sanding the epoxy & hemp joints, which can be significantly reduced by equipping our workshop with special pneumatic sanding and other tools and a powerful enough air compressor, for which we are now seeking further funds.

We achieved these results through the amazing support of our Global Giving Crowdfunding donors and we sincerely hope you can now help us reach our funding goals to fully equip the Bamboo Workshop, and offer prospects for sustainable livelihoods for local youth showcase the unique properties and benefits of bamboo as one of the most sustainable and eco- friendly resources on the planet. 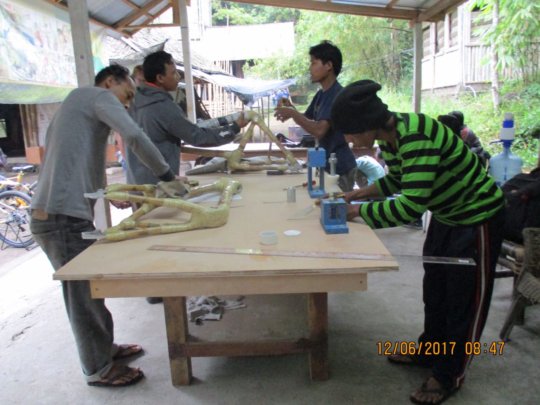 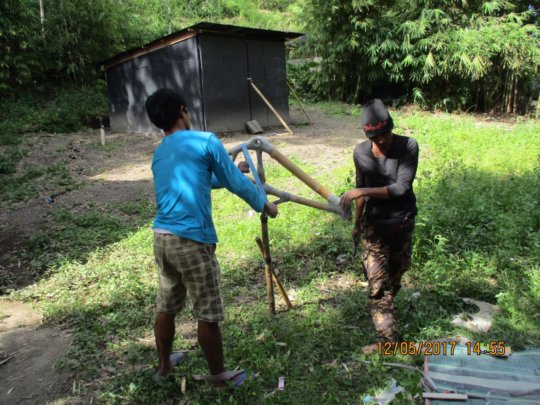 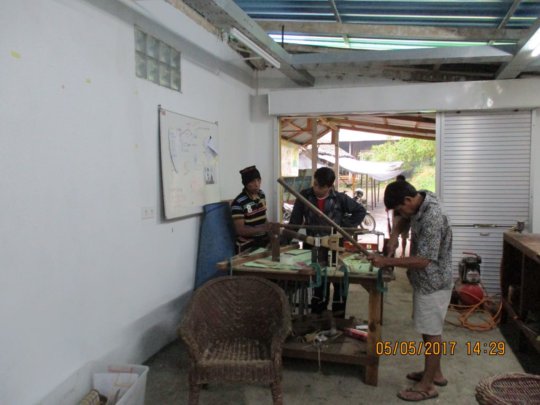 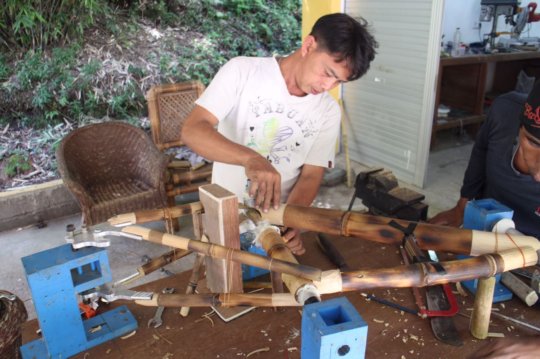 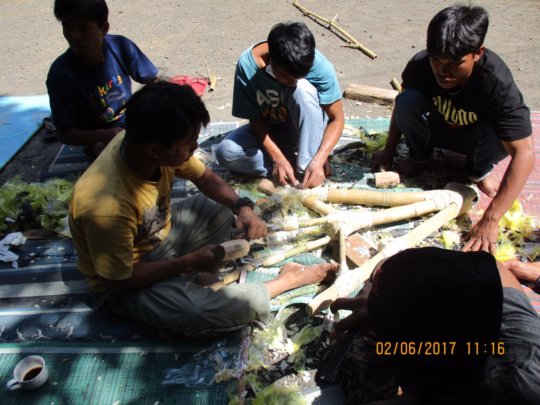 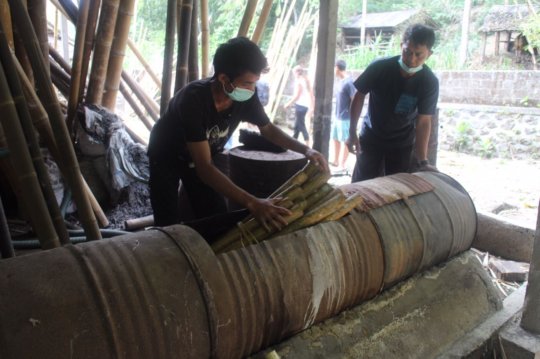 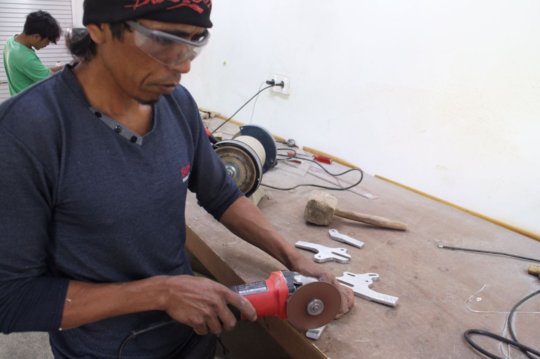