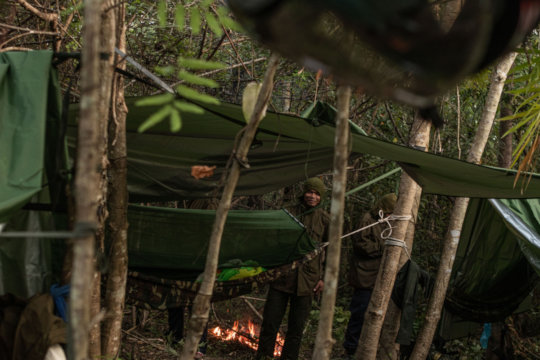 ‘The longest patrol I’ve done is seven days…sometimes we have to go 48 hours without sleep’. Long patrols are a tough physical and mental challenge, explains ID, one of Wildlife Alliance’s rangers, but they bring the team closer, allowing them to form stronger bonds.

Working in the forest for days at a time relies on complete self-sufficiency. All food, cooking equipment, and camping gear is distributed between the team and the task of cooking is rotated. Not only this but confiscated illegal gear is sometimes required to be taken back to the station for evidence. At any one time, the team could be carrying up to 15 chainsaws on their motorbikes whilst also on patrol.

However, being self-sufficient is just the tip of the iceberg when it comes down to effective long patrols. Tracking down illegal poachers and loggers in dense rainforest requires rangers to be sharp. Often teams will go out without a lot of intelligence, meaning they have to rely on their ability to follow signs of recent illegal activity. ‘’Over time you start to notice things. For example, I learned how to distinguish between a trail made by a truck full of timber and one that’s not. The dryness of the prints indicates how fresh they are,’’ says ID.

As the rains from Cambodia’s wet season sweep in, a whole new set of challenges presents itself. The rains can wash out existing trails and paths, making even traveling a few hundred meters a significant challenge. Despite this, there is a silver lining to the wet season. The tracks created by offenders are easier to distinguish and offenders don’t go deeper into the forest.

Despite the challenges, long patrols are an integral part of Wildlife Alliance’s work by its rangers to protect almost 1.5 million hectares of the Cardamoms Rainforest Landscape. 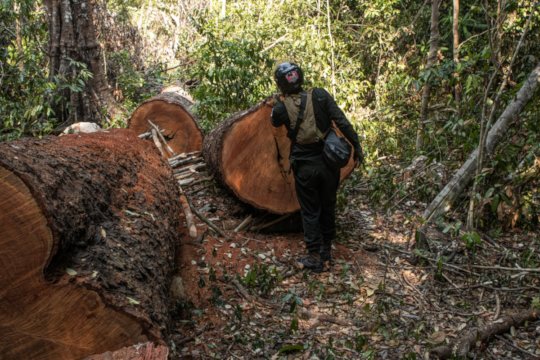 Aftermath of illegal loggers cutting in a PA 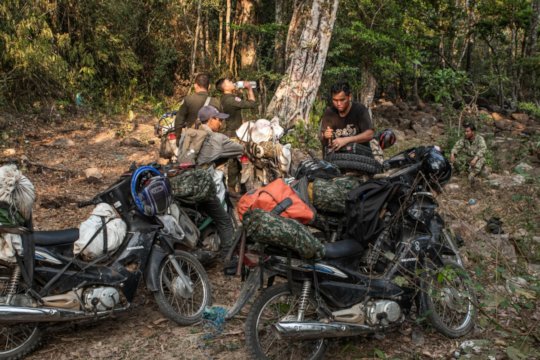 Rangers load up their motorbikes for a long patrol 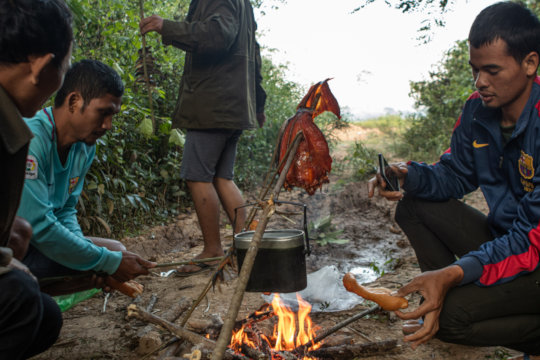 Roveang station rangers cook after a day of patrol
May 26, 2020 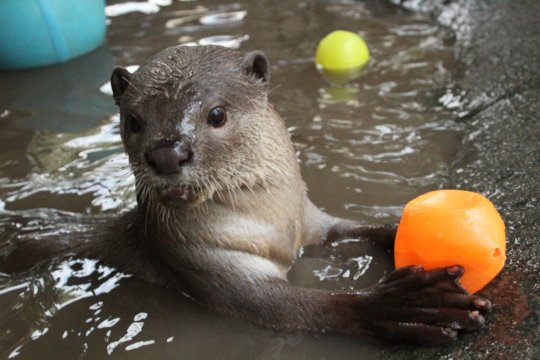 If we can ever appreciate the importance of enrichment for captive animals, now is certainly the time. Locked indoors? Going stir crazy within the same walls day in and day out? Sick of seeing the same scenery, the same housemates, every day?! We’re all in the same boat. We’re all feeling it. So this can give you some perspective from the animals who are permanent residents at Phnom Tamao.

Enrichment comes in all shapes and sizes. What works for one species, or even one individual, may not work for another. This means we have to be on our toes and constantly coming up with new ideas or reinventing old ones. Especially at the moment, when funding is tight due to the downturn in tourism, the team is having to get creative to keep costs down, but ensure our residents are being kept happy and fulfilled. Over the last few months they have been very busy! One example of cost-cutting and recycling; trimming branches back in a pre-release gibbon enclosure, which ensures the occupants cannot escape, resulted in the re-branching of a silver langur enclosure. The silver langurs are smart though, and it’s very difficult to entice the entire troop into the satellite enclosure, an adjoined smaller enclosure, at the same time enabling the staff to access their larger enclosure safely without their presence. After much coaxing with some feeding enrichment, the team was successful and took the opportunity to not only re-branch their enclosure but also hang some new ladders and swings, and even re-position some of the existing structures, for a change of scenery.

Given the additional soap and cardboard packaging we’ve recently experienced with an increase in our personal protective equipment (PPE) due to Coronavirus, we’ve started putting this packaging to use with our juvenile primates by providing them with feeding packages. Imagine opening your Christmas or Birthday presents to find the inside filled with tasty treats! It normally doesn’t take them too long to figure out how to bust in, and once they’ve quickly devoured the inside, then they normally turn their attention to pulling and chewing the boxes to pieces, so this is an activity only provided under the strict supervision of the Keepers to ensure no one starts swallowing the packaging!

Even something as simple as cleaning out a pool can often be a great source of enrichment for some of our residents. The elephant pools are drained at least once a year and cleaned out. This takes the team a few days, to drain the water, allow the sediment in the bottom to dry out as much as possible, and then with manual labor be scooped out. There’s normally a tire or two at the bottom that also needs to be pulled out, which we think the eles delight in when they throw them in, knowing they’ll have to watch some poor human servant lug them back out with much difficulty. The pool is then filled with water that is either pumped or trucked in, during the dry season, from the nearby Tonle Bati lake approximately 8kms away. The eles often delight in the clean water for days afterward. Seen splashing about and throwing their tires in, to the horror of the Keepers watching on! 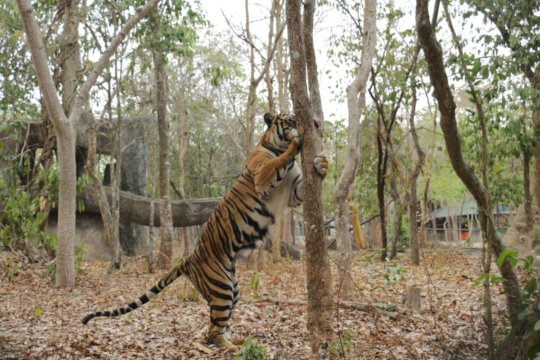 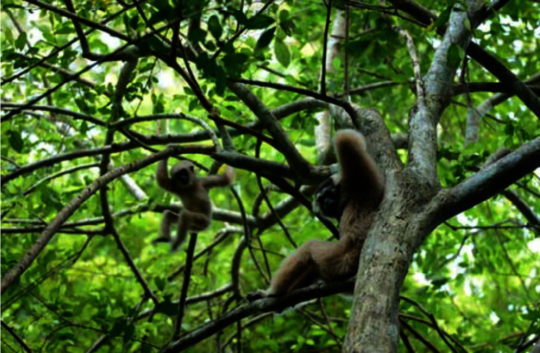 Our program with APSARA and FA, the relevant departments of the Cambodian Government, to restore wildlife back into the forests of Angkor, which surround the magnificent ancient temples, progresses well. Baray and Saranick, the first pair of pileated gibbons born at PTWRC and taken to Angkor on June 29, 2013 and released on December 12 and their baby, Pingpeeung or Spider, born on September 3, 2014 continue to do well. Spider is growing well and is becoming more independent, traveling confidently through the trees on her own, although she never strays far from her family. The second baby, Chungruth, (Cricket) born to the pair on July 6, 2017 is also well. Although we are continuing to feed our released gibbons to ensure they remain in safe areas during the early stages of this project, they are reverting well. Baray sometimes eats the flowers planted in the garden of the Angkor Zipline, but our relations with this company are good. Although Sarin, one of our excellent staff who care for and monitor our animals in Angkor, mentioned recently that Saranick was looking a little fat, we were happily surprised when she produced her third baby on March 30. We have named the new arrival Konteslong (Water beetle) to continue the insect theme of our wildborn gibbons. Mother and baby are doing well!

The second pair of gibbons, Bayon and Tevy, which we brought to Angkor in 2014 are also well. The small problems we were seeing during feed time, when Tevy was clearly concerned in the proximity of Bayon, have been resolved by hoisting a second food basket into the trees 20 meters away. At other times there does not appear to be a problem between the pair. Aping (Tarantula), born on June 30, 2016 is well and growing fast. Tevy gave birth to her second infant on August 2, 2018, who we call Kandop or Grasshopper, is also well.

The young gibbons we brought to acclimatize at Takao Gate, on November 28, 2018 have settled down well. Female Pompoi was nervous and at first displayed signs that she was frightened of people, is becoming more relaxed. Male, Borey, is less nervous and the pair get on well together.

Mr. Rith, our second keeper in Angkor and the son of Sarin, saw 4 or 5 of the silvered langurs we captured from an island off the coast in 2018 and relocated in Angkor, still close to Lake Santamea, the area where we originally released them. Our released muntjac are also still seen now and again.

The most interesting news from Angkor is with regard to our otters, which we released towards the end of last year. You will remember in my last Newsletter of 2019, I mentioned that their behavior had changed and they were traveling less, preferring to remain close to home, near their old release enclosure. They stopped moving around the forest, spending most of their time in the hole they dug outside the enclosure around 20 meters away, within the roots of a large tree. They also stopped entering the cage for food via the door, preferring to use the hole they dug under the fence. We subsequently closed the cage door for safety reasons. We continue to feed both live and dead fish twice each day, to provide nourishment and ensure we have a modicum of control. The female started to appear at the pool with the male less frequently and sometimes left early from feeding. On February 23 we saw two otter pups in the pool with the adults for the first time. They looked to be around 6 weeks old. They were seen again twice before the end of February. On the last occasion, the female bit the hand of Sarin when he was taking photos of the pups! He was obviously getting too close! The lakes nearby were mostly dry, as APSARA has closed the waterways for maintenance purposes, but channels have been opened again and during March the lakes close to our otters’ residence had filled again. By the end of March the two pups accompanied their parents every time they went to feed.

There is a growing interest within APSARA, the governing authority in Angkor, concerning our work here and this seems to have increased, thanks to the patter of tiny feet of our new arrivals. Whether this transcends into a greater general interest within the government towards the conservation of wildlife in Cambodia, only time will tell, but to find out we must press on... 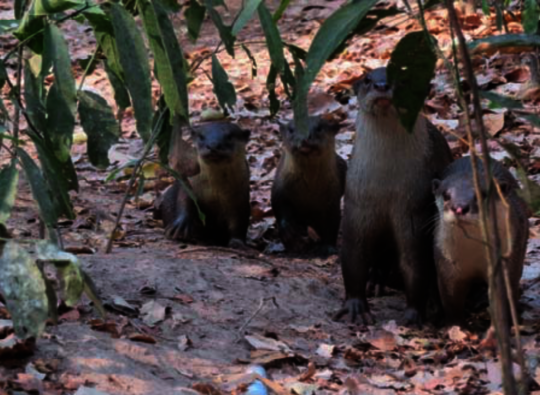 Proud parents!
1 2 3 4 5 6 7 8 9 ... 101 ›
WARNING: Javascript is currently disabled or is not available in your browser. GlobalGiving makes extensive use of Javascript and will not function properly with Javascript disabled. Please enable Javascript and refresh this page.