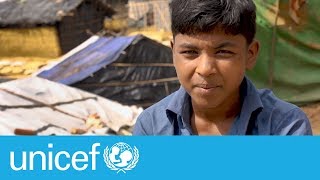 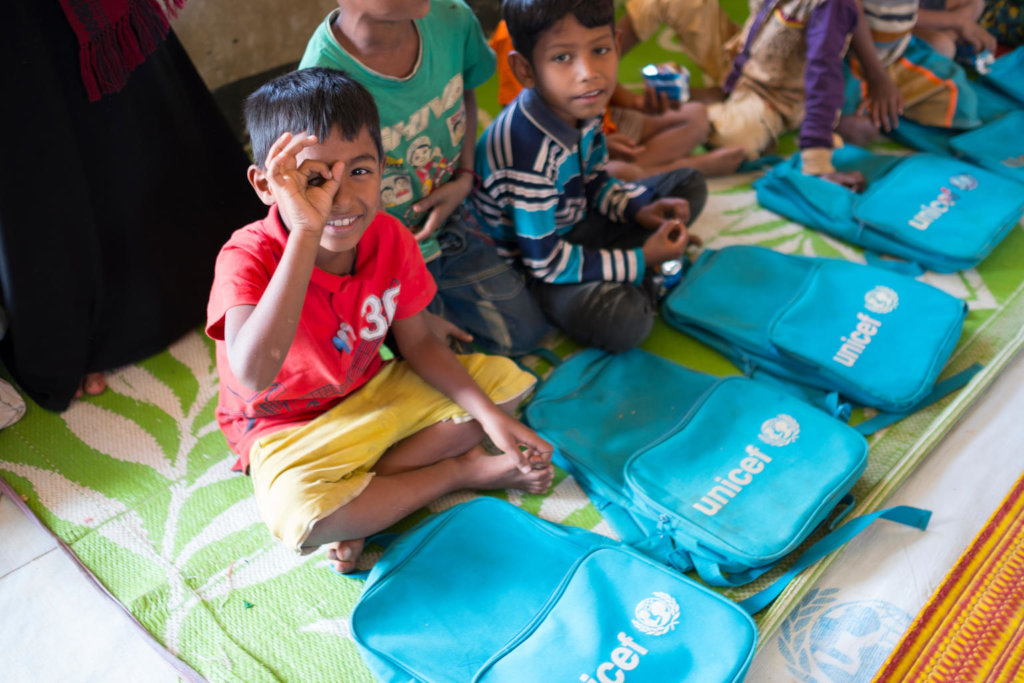 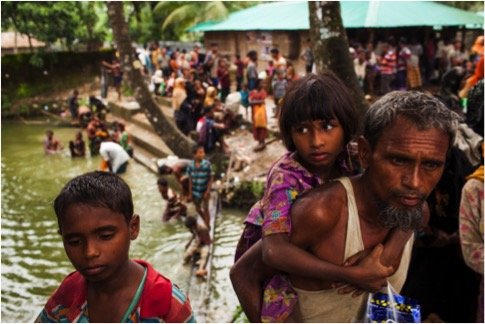 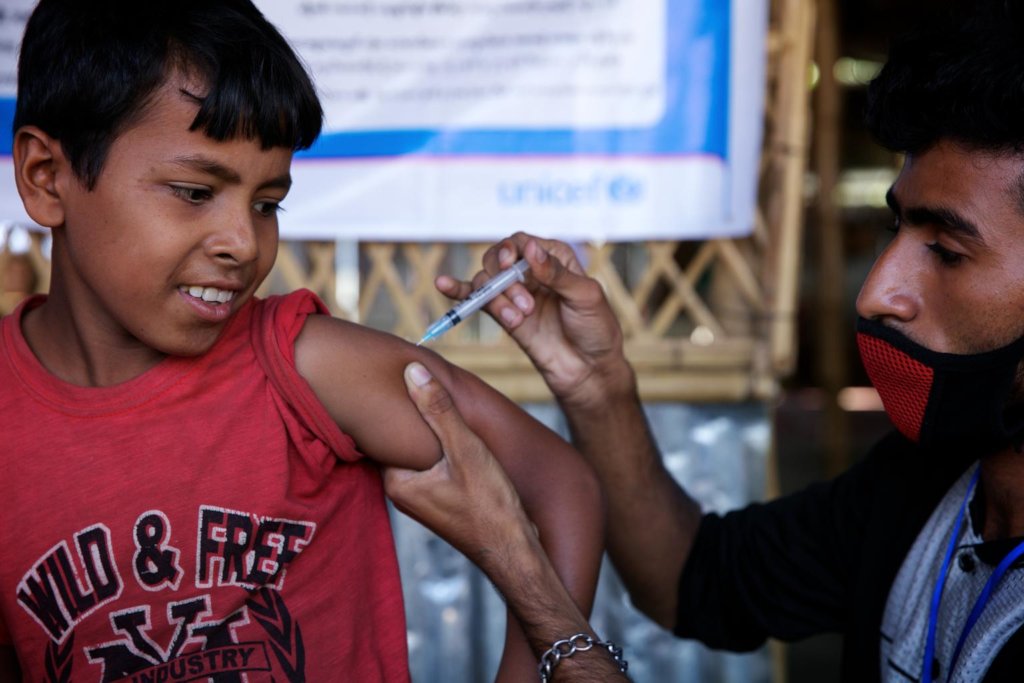 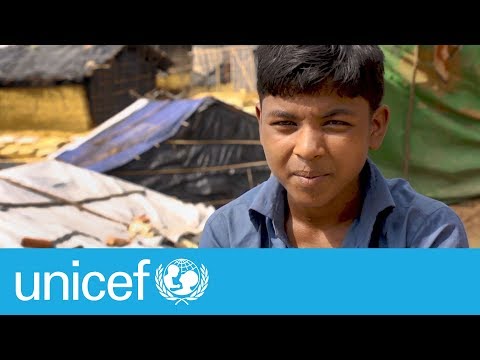 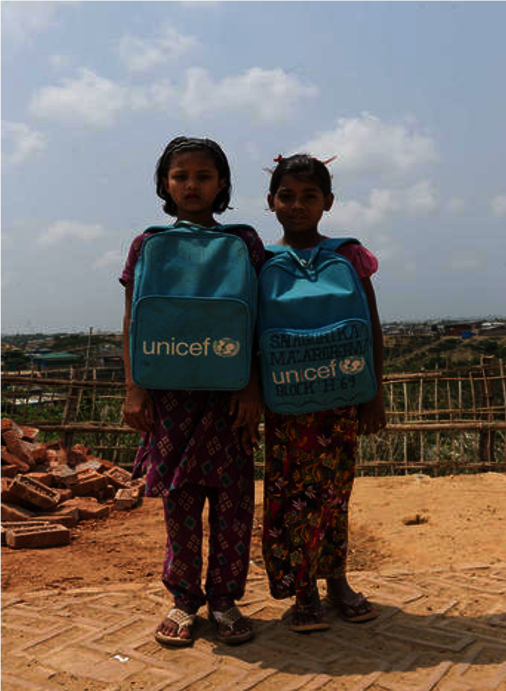 In August 2017, when hundreds of thousands of refugees from Myanmar fled to Bangladesh, the world took note. Of particular concern was the fact that out of the 730,000 Rohingya refugees flooding Bangladesh’s beaches and paddy fields, almost 60 percent of them were children. Today, around 910,000 Rohingya have settled in Cox’s Bazar District in southern Bangladesh. Life for these refugees, especially for children, is characterized by uncertainty. Despite having access to some basic services, Rohingya children remain highly dependent on short term aid and live in precarious conditions, particularly in the cramped camps where living conditions are difficult and dangerous.

In 2019, UNICEF noted an increase in child exploitation within the Rohingya refugee camps. In Bangladesh, Rohingya children are not registered at birth. Consequently, with a lack of legal identity these children are unable to secure refugee status and often become appealing targets to criminal groups for labor and sexual exploitation. Girls in particular are at risk of commercial sexual exploitation and gender-based violence.

UNICEF is also concerned by the number of children who are unable to obtain an education.  Although UNICEF has been able to provide access to learning for nearly 213,000 Rohingya children ages 4 to 14 through 2,167 learning centers, there are still 25,000 children who are not attending any learning program. Furthermore, 97 percent of children aged 15 to 18 years old are not attending any type of education facility. UNICEF fears that these children run the risk of becoming a “lost generation” if there are unable to continue to receive an education while displaced.

Thanks to your support, UNICEF is working closely with partners to provide essential water, sanitation and hygiene (WASH), health, nutrition, education and child protection services to the Rohingya refugees.

In 2019 UNICEF and partners achieved the following results for Rohingya refugees:

In 2020 UNICEF desires to continue to scale up its response amongst the Rohingya refugee population. In particular, the quality of education requires further improvement and while access to water has improved, there are still persistent issues with quality. Your continued support will allow us to continue to maintain the livelihoods of Rohingya children in the coming year. Thank you for your partnership and for all you do to create a better world for children. 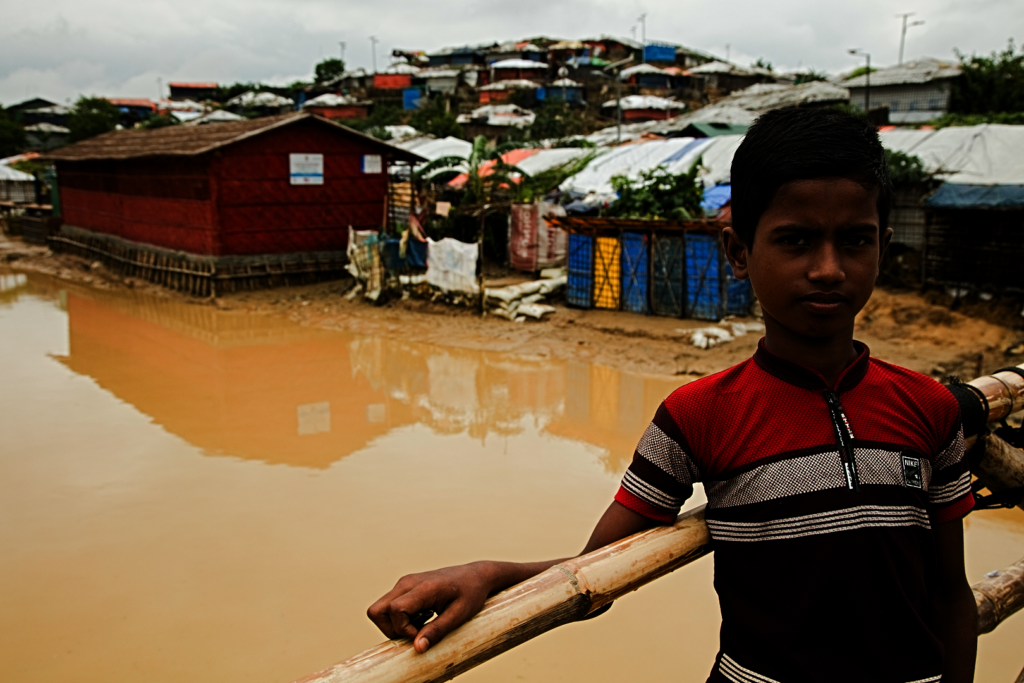 Thanks to your generous support, UNICEF continues its efforts to provide Rohingya children and their families with the life-saving interventions they need. UNICEF helped to avert major disease outbreaks by focusing on prevention, social mobilization, service coverage and quality improvements in health, nutrition and water services. The education sector reached over 90 percent of Rohingya children aged 4 to 14 living in camps with education. Additionally, integrated vocational and life skills programs are reaching 12,500 adolescent boys and girls in camps and host communities. As part of the sector-wide approach to water safety, piped water networks were constructed to improve the quality and sustainability of drinking water. Additional water networks planned and will reach 80 percent of the population, with your support.

In the first half of 2019, UNICEF and its partners have:

Update: 2 Years of the Rohingya Crisis 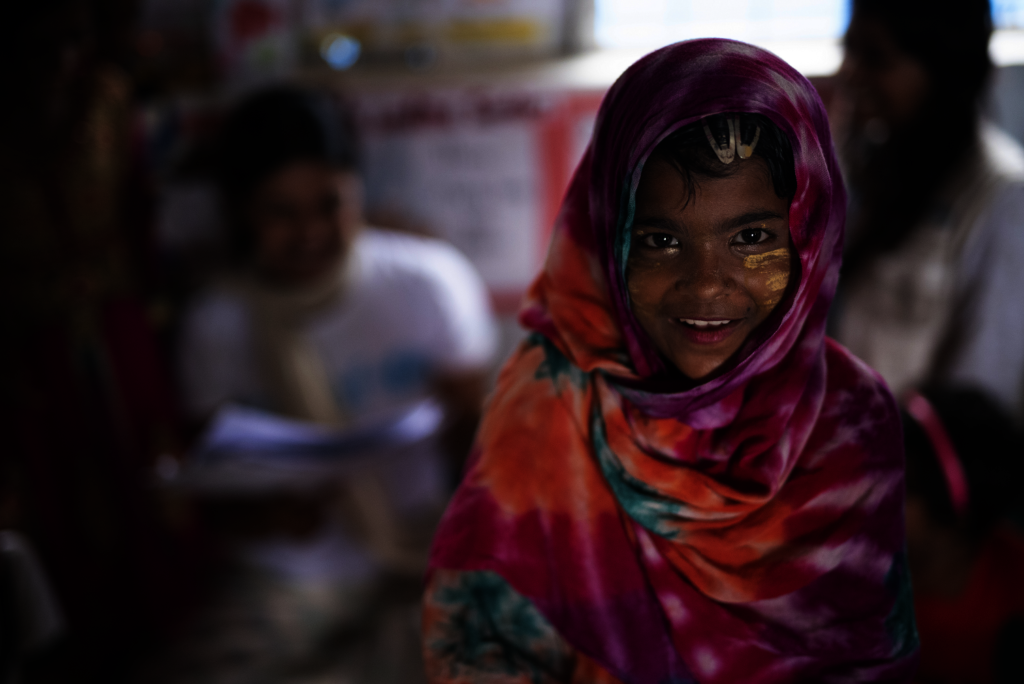 As you may have heard, Sunday, August 25 marked 2 years since the Rohingya crisis first began. Over the past 2 years, more than 900,000 people fled violence in Myanmar and sought refuge in Coz Bazar, Bangladesh.

Thanks to your generous support, UNICEF continues our efforts to provide Rohingya children and their families with the life-saving interventions they need. Although the conditions in Cox’s Bazar are still challenging, Rohingya children and their families remain in the district due to continued violence in Myanmar. Following and attempted initial repatriation by the Myanmar and Bangladesh Governments last November, none of the refugees settled in Bangladesh expressed interest to voluntarily return to Myanmar. Given the area’s high level of risk for natural hazards, the capacity to prepare for and respond to sudden-onset disasters will also be supported throughout the country. Program targets for 2019 include: 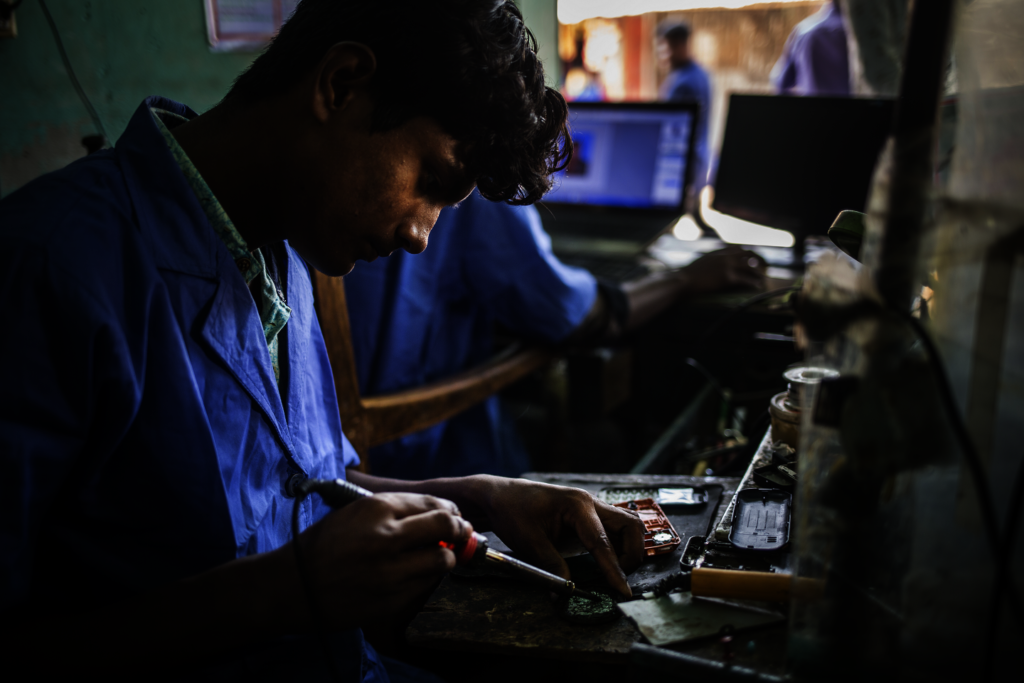 Thanks to your generous support, UNICEF scaled up efforts across all program areas in Cox Bazar, Bangladesh to provide Rohingya children and adolescents with opportunities for a better future.

Since August 2017, more than 900,000 Rohingya, fled violence in Myanmar and settled in Cox’s Bazar. Rohingya children witnessed the horrors of this conflict with many ending up the target of grave violations. Arriving in Bangladesh by the hundreds of thousands, the needs of children and their families were massive and ranged from psychosocial support to access to basic social services such as water, health, nutrition and education.

Due to your support, UNICEF has been able to work across sectors to ensure children and their families are afforded a better future. Examples of such interventions are:

As the humanitarian needs in Cox’s Bazar develop, and the lives of children are affected, UNICEF and its partners will continue scaling up activities in Bangladesh thanks to gifts like yours. These interventions provide families with emergency assistance, both for the short-term and long-term. Thank you again for your ongoing support as UNICEF continues to provide relief for the 500,000+ Rohingya children who have been forced from their homes. 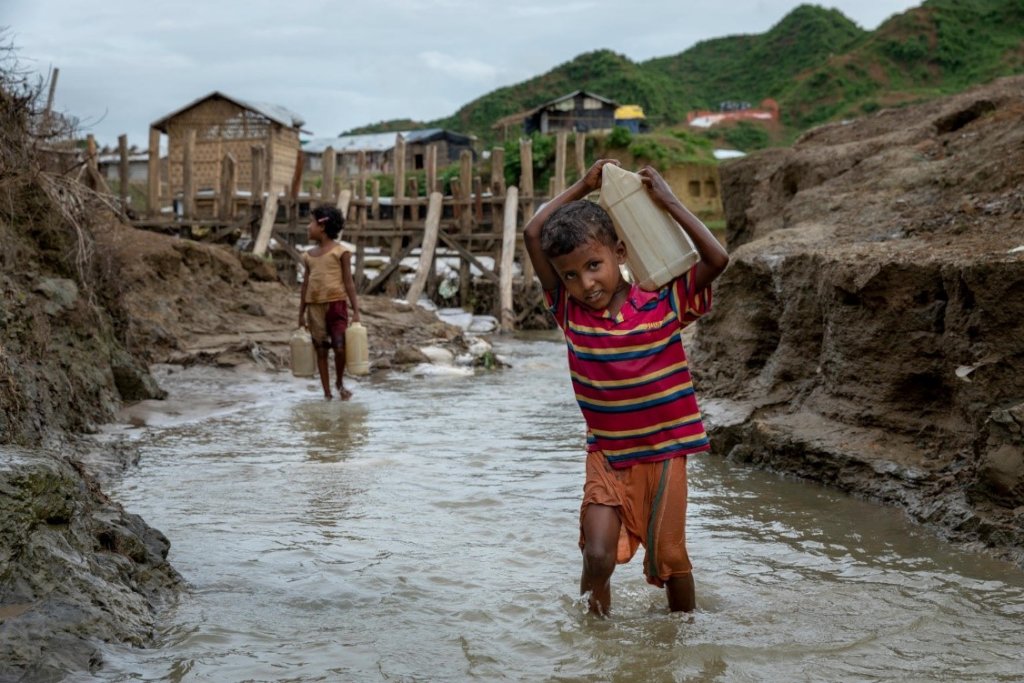 Thanks to donations like yours, UNICEF has been supporting the Rohingya Refugee Crisis since the beginning of 2017 with a steady stream of supplies such as trucks filled with emergency water, sanitation and hygiene supplies, for thousands of children. Other supplies include detergent powder, soap, containers to transport water, along with sanitary napkins, towels and sandals.

UNICEF’s current response includes an emphasis on expanding support to the Bangladeshi community in Cox’s Bazar district along with preparedness and response to other emergencies nationwide.

Thanks to your support, UNICEF’s actions are focused around four key strategies in Cox’s Bazar:

Your continued support is helping children at a time when they need it most. Thank you for putting children first.

GlobalGiving
Guarantee
Donate https://www.globalgiving.org/dy/cart/view/gg.html?cmd=addItem&projid=31416&rf=microdata&frequency=ONCE&amount=25
Please Note
WARNING: Javascript is currently disabled or is not available in your browser. GlobalGiving makes extensive use of Javascript and will not function properly with Javascript disabled. Please enable Javascript and refresh this page.