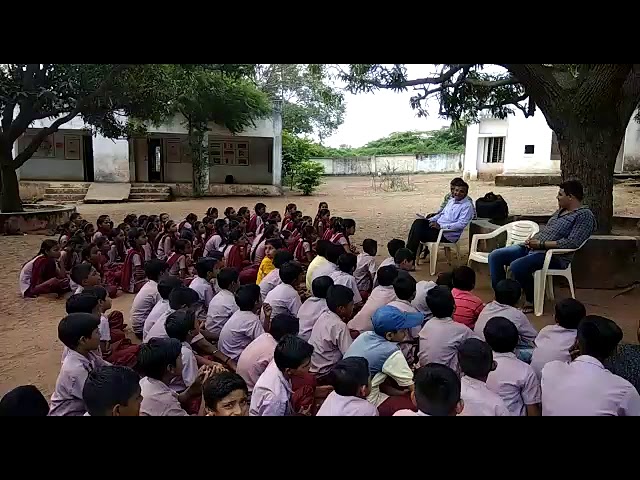 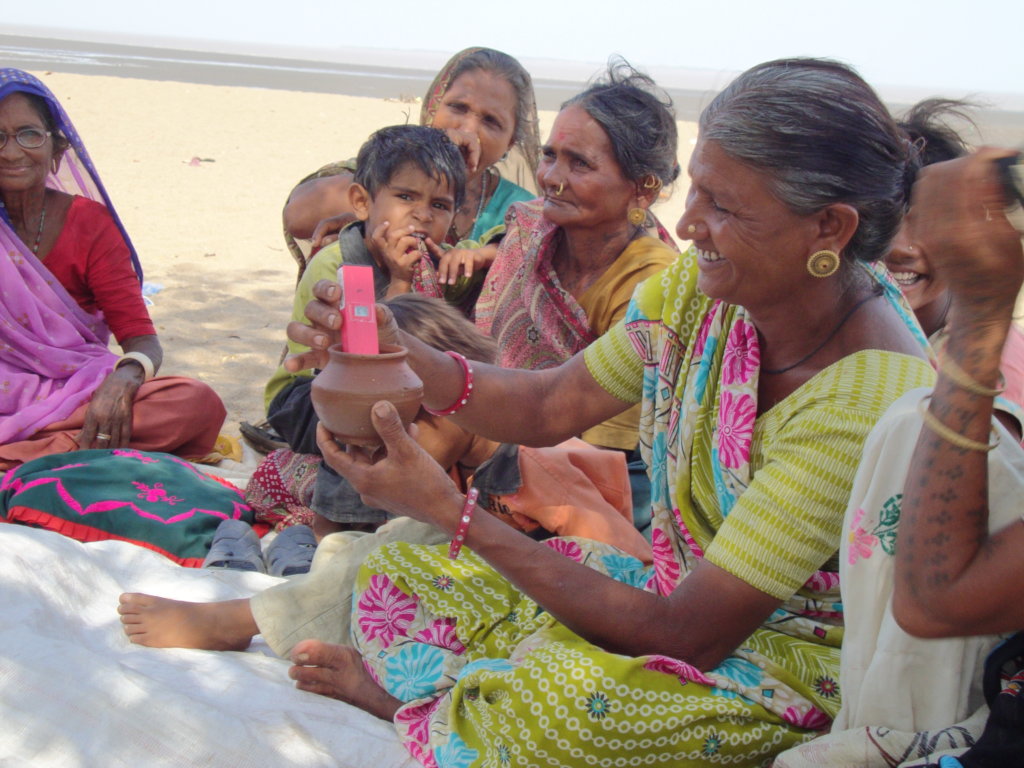 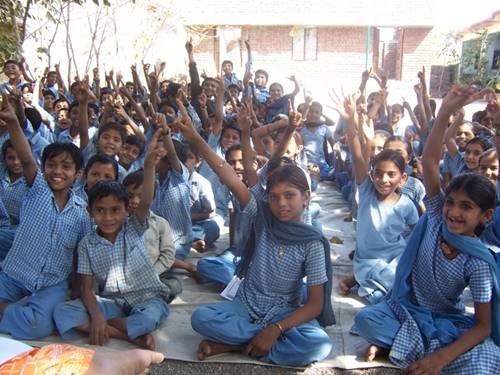 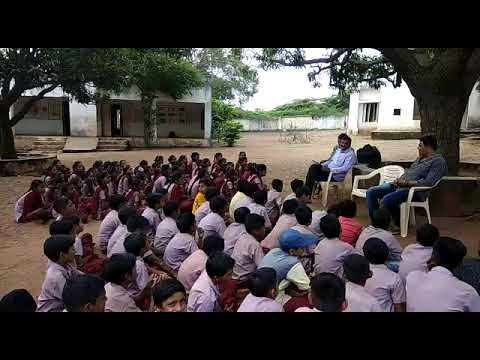 Responding to the 2nd Covid wave in our areas 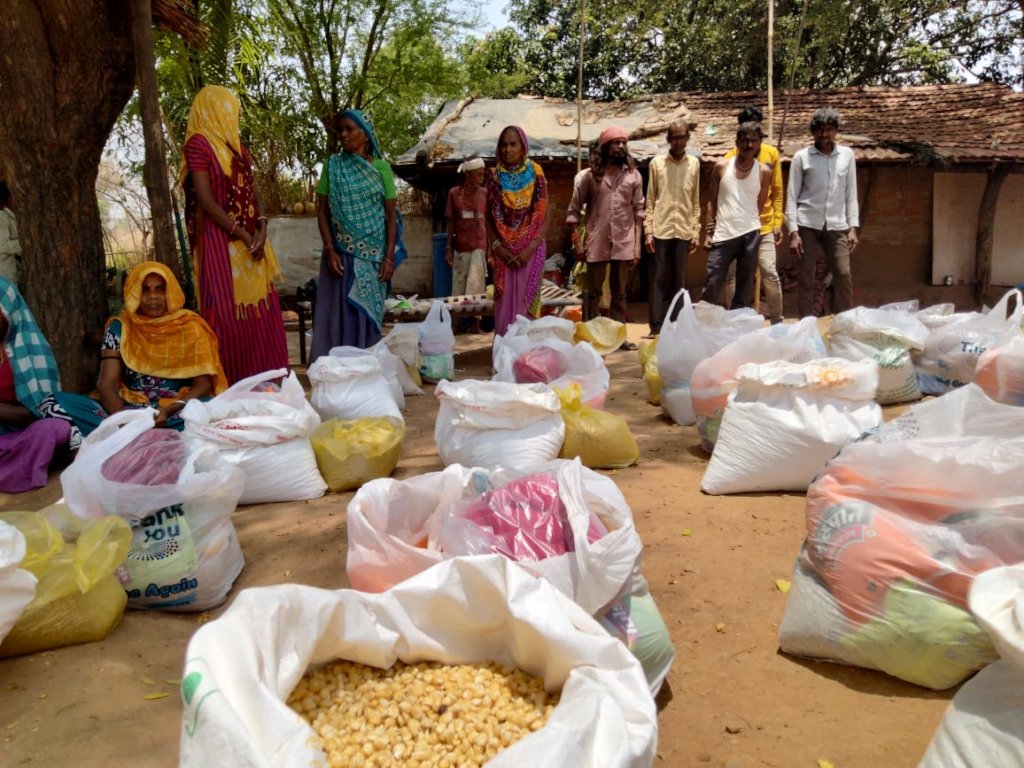 Ration kits to the most vulnerable

The second wave of Covid magnified the impact on rural communities. Those on the margins, who had barely started tying some threads were once again faced with a situation, more complex than before. Contact with community leaders & institutions, Panchayats and local Government about the local situation brought out the despair and dismal situation in rural Gujarat. In the second wave, Utthan applied its learning’s from the first wave response while combatting the challenges of its own team affected by Covid and impacted by the loss of near and dear ones. RCRC Survey[1] of January 21, showed that in Gujarat the number of HHs earning less than Rs.5000/month had increased from 49% to 73%, amongst the 3 highest increases across 11 States. In our work areas 38% households were still cutting back on food consumption in coastal districts and 25% in tribal districts. The situation of work under NREGA brought out from a 53 village Utthan survey in 1st week of May 21, showed that NREGA works had been initiated only in 30% villages. SHGs and group processes had broken down in the face of COVID and the aftermath of Cyclone Tauktea, loss of livelihoods resulting in loss of savings, non-repayment of existing loans; so, these options for credit support were not available to women farmers.

Utthan efforts to respond to the situation

-          170 women farmers from whom grains were purchased for the ration kits made an income of Rs.15,09,000. Comparatively, women got a 16% benefit by selling at their farmgate with no worry of drudgery and price negotiations. This amount was thus infused back into the local economy, into women’s accounts.

-          7805 kitchen garden relief partners supported another 23000+ families through sharing of excess vegetable produce in first phase and the 2075 partners in second wave are expected to share with 6000+ families.

-          Approximately 70% of kharif support relief partners of first phase returned double the seeds provided as relief. Decentralised Seed banks were set up to store these seeds for next season. 800 of the women farmers provided Kharif crop seed & input were supported through the seed return back from 1st wave support wherein relief partners returned double the seeds provided as relief into decentralised Seed banks. It is expected that women farmers supported in 2nd phase will similarly return double the seed quantum as solidarity to continue this cycle.

-          Work to support survivors of violence was continued by the Justice Committees of Federations. 16 interviews were specifically done with different categories of women to build our own understand of the impact of Second wave of Covid on Women & Girls and accordingly devise strategies.

Utthan’s networks helped several coordinated efforts on ground and in dialogue with stakeholders esp. Govt. Close connect was maintained with RCRC esp. for coordinated efforts, learning and exchange, advocacy on covid impact on rural India at national level and Gujarat chapter level. Three rounds of intensive data collection for Multi state surveys to Monitor rural lives during the pandemic as part of a national network, Rapid Rural Community Response to Covid-19 (RCRC) to inform our work and various stakeholders in addition to Utthan’s own surveys. Positive discussions were held by RCRC Gujarat with the Nodal person Covid response, MoHFW. Utthan also came together in the Inter Agency Group, Gujarat for Joint Needs Assessment in the aftermath of the Cyclone. Meeting with the TDOs were held to understand Govt.’s action plan who shared that their assessment of damage is ongoing. Efforts through WGWLO & MAKAAM strengthened responses with women farmers. 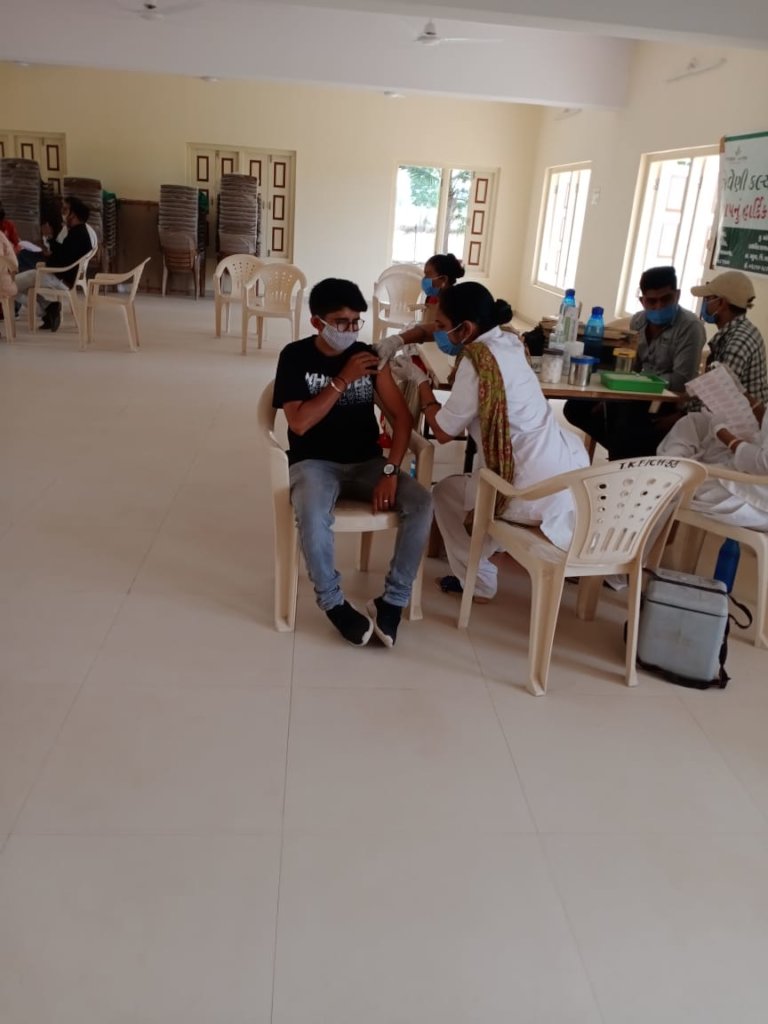 Utthan is vaccinated - take your jab!

The second wave of Covid in India has magnified the impact on rural communities.

Those who had barely started tying some threads are once again faced with a situation, more complex than before. With our experience of response in the first wave, our team has already initiated efforts with community leaders & institutions, Panchayats and Government.

Utthan switched to a mix of at-office work from home since the last 20 days approximately but since last 10 days we have moved totally to working from home, with some exceptions. (We currently have 4 active Covid cases amongst a team of 29. Till date, 7 members have recovered from Covid.) Our first steps have been to talk to community leaders about the local situation which brings out that the despair and dismal situation in rural Gujarat is shocking and disturbing.

Our team and capacitated community leaders have made several endearing efforts in personal capacity. Locally, community leaders, caste/religious groups, Panchayats etc. have also taken some steps. We have done a quick survey of 100 villages and are seeing that the very first need is

- to prevent spread by stepping up awareness on covid appropriate behaviour

- training of village cadre to organise and roll out this effort 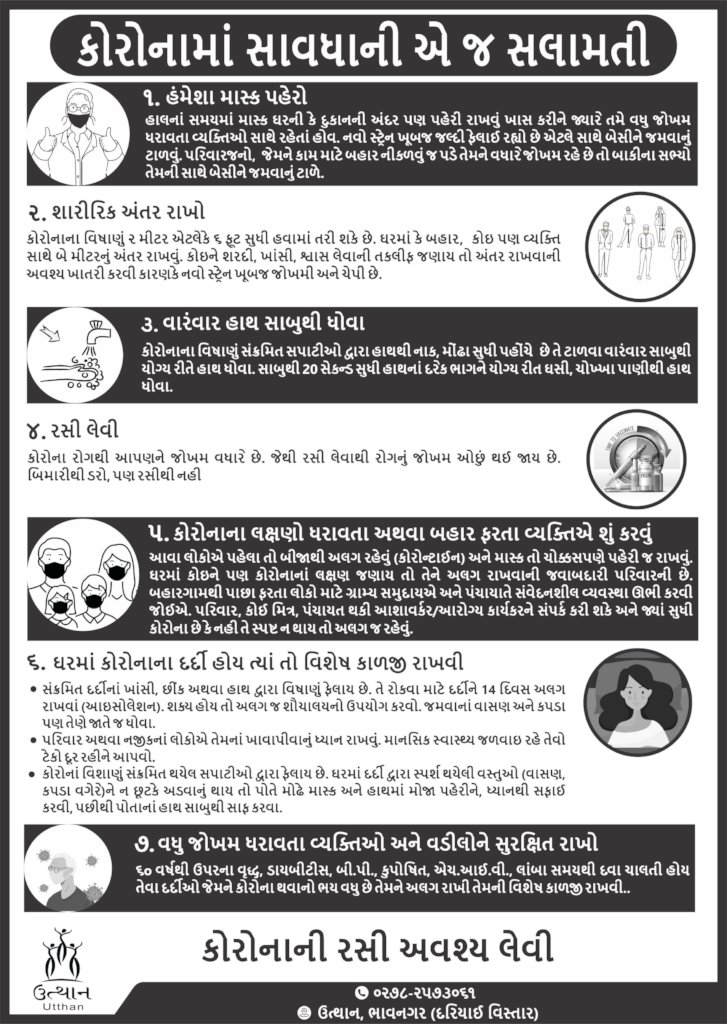 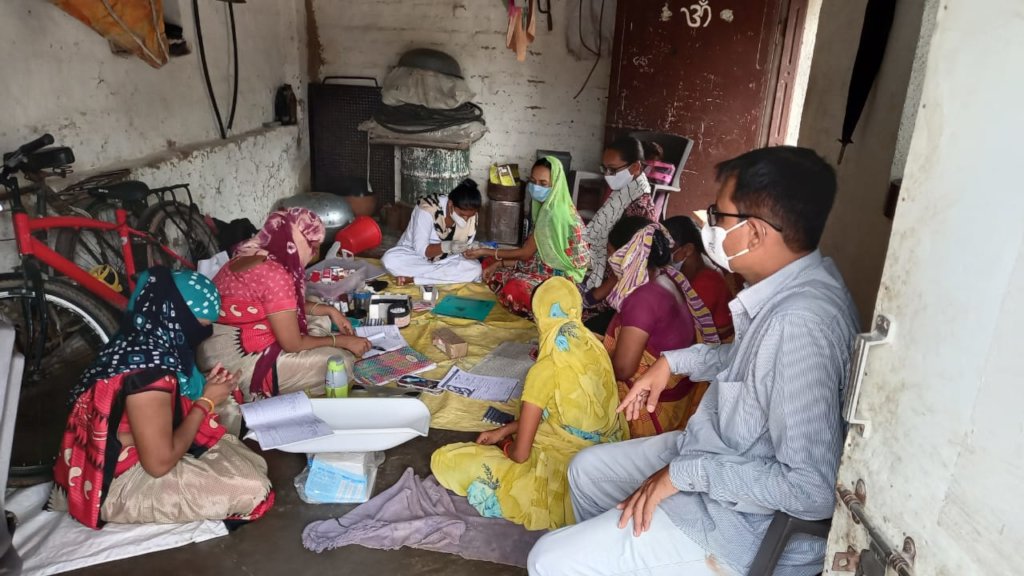 VILLAGE NETWORK BUILDING FOR COVID PREVENTION & RESPONSE: Utthan adopted a strategy of ‘Capacitating local leadership to create a Village network’ towards fulfilment of following objectives with an outreach to a population of 30000 persons through this effort.

This has been done in 20 villages in depth and basic awareness work is being done across 100 villages. The 20 villages chosen include those where there are either some positive COVID cases, poor standards of safety practices, lack of knowledge on COVID/prevention, need to better influence key stakeholders. Except in Bharuch, these are villages where Utthan has a field presence and there is some local leadership to propel the effort.

Implementation: The initiative was implemented by Utthan’s existing team members and Saathi Fellows in collaboration with local village institutions. The village comittee continues to make efforts in monitoring prevention practices. The Activities included 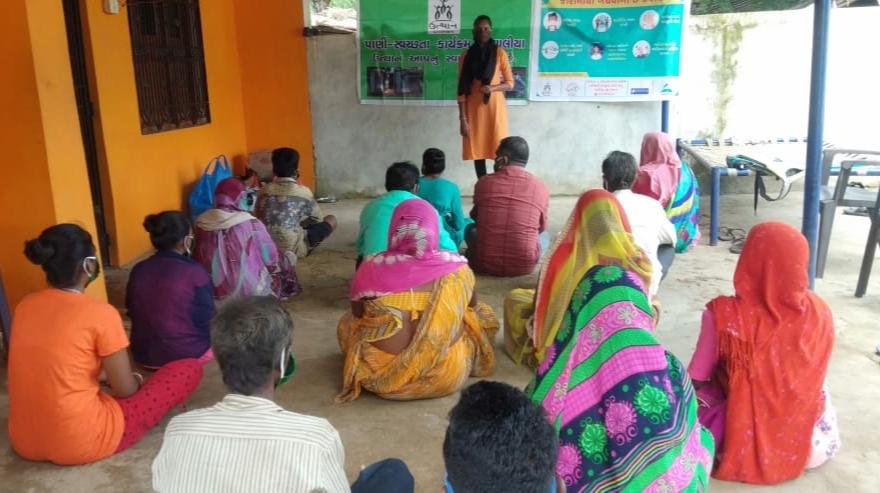 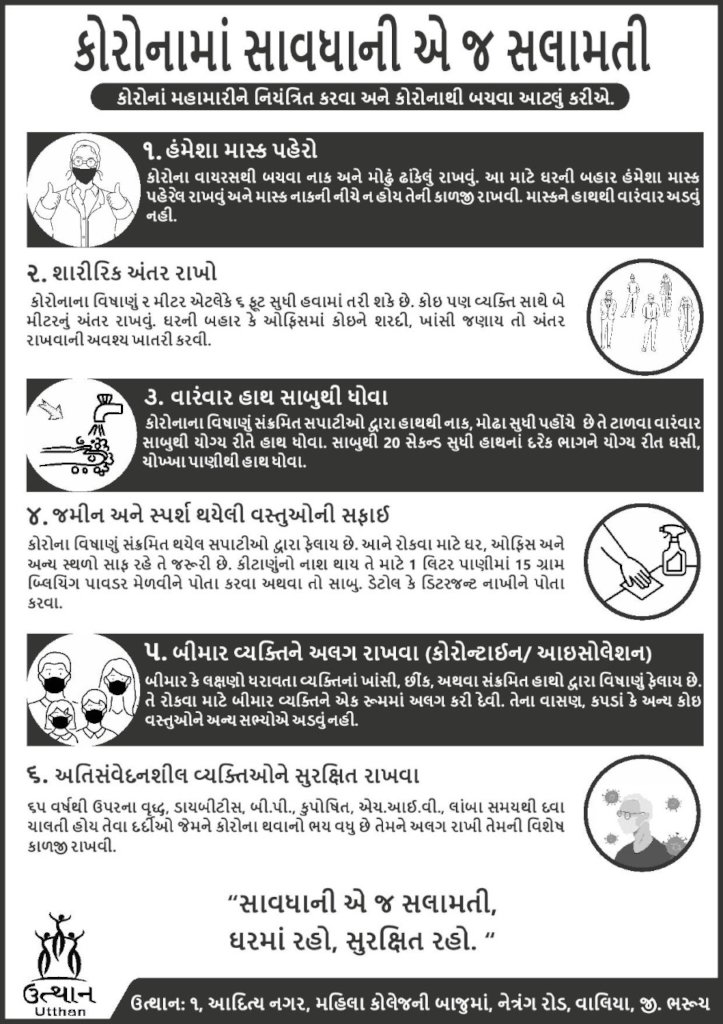 Riding over the Crisis -The COVID aftermath 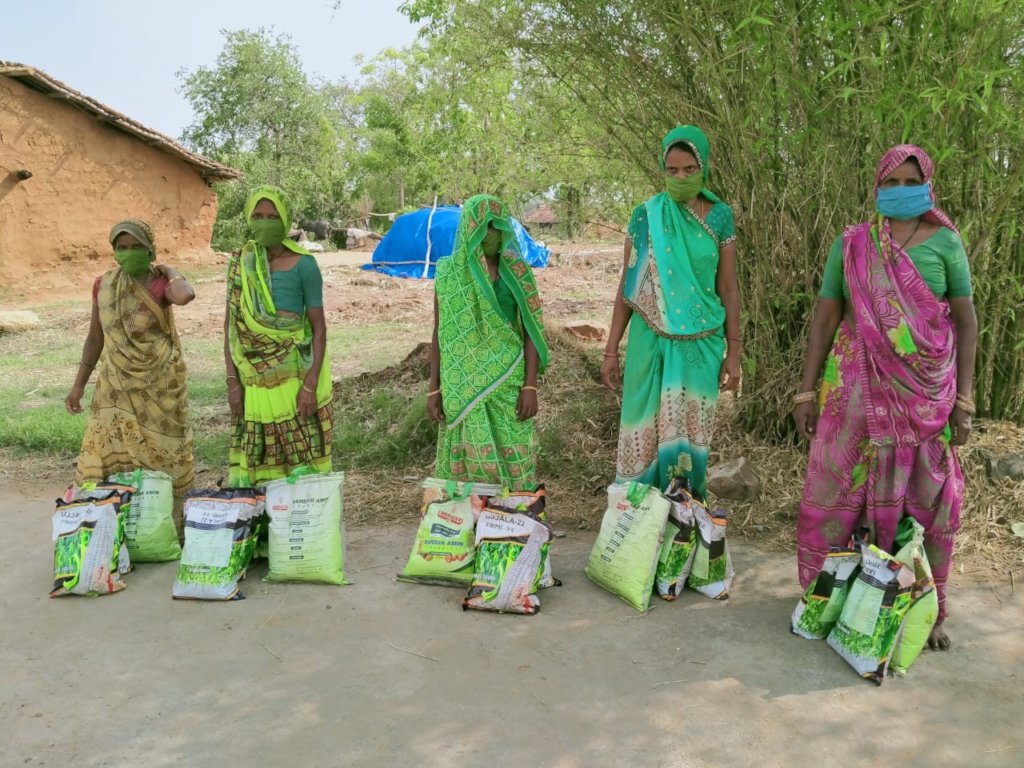 Agriculture is the largest source of livelihoods in India. 70 percent of its rural households still depend primarily on agriculture for their livelihood, with 82 percent of farmers being small and marginal. The Coronavirus lockdown has adversely affect the agriculture sector and farmers from rural India.

Farm activities in Gujarat are at its peak between April to June as it is the kharif season. It is also the time when farmers begin sowing the rain-fed crops, such as- wheat, pulses, maize and bajri. Utthan's continuous contact with the communities brought out that many villages did not have easy access to quality sustainable seed varieties. The lockdown has created disruption in supply chain of agricultural resources like seeds, pesticide and mobility of the farm produced goods. In some villages, they need to travel far from their village to procure the seeds which becomes very risk as the mobility were restricted. Women farmers, Women headed households, pregnant women, dalits, minorities, backward castes and nomadic/denotified tribes as well as people with disabilities are the worst hit.

Suryaben laments that she could not keep aside any grains for seeds to sow during the monsoon this year. “Many of my family members had to return to the villages as their work in the city stopped and everything got used up.”

Like Suryaben, families whose income is dependent on a mix of labour work in agriculture, construction and fisheries have lost their only means of livelihood. NREGA works were not initiated before the third week of April in villages. Return of reverse migrants to their native villages has increased the demand of food among these families. For few families, the situation was so adverse that to fulfil families’ requirements of food, they had to take loan with the support of Women’s federation for household consumption. They didn’t have money to purchase local variety of seeds for upcoming Kharif season.

In response to this crisis, Kharif Kits (Seeds for monsson sowing) were distributed to 1197 families across 55 villages, 684 in coastal areas and 513 in tribal area. Villages were selected from existing area of intervention where Utthan’s has direct or indirect presence. Small and marginal farmers and reverse migrant were selected for Khari Kit support. In selection of relief partners, preference was given to single women, women headed households and families having members with disabilities.

PEOPLE IN NEED HAVE MULTIPLIED,  WE REALLY NEED SUPPORTERS TO MULTIPLY TOO! 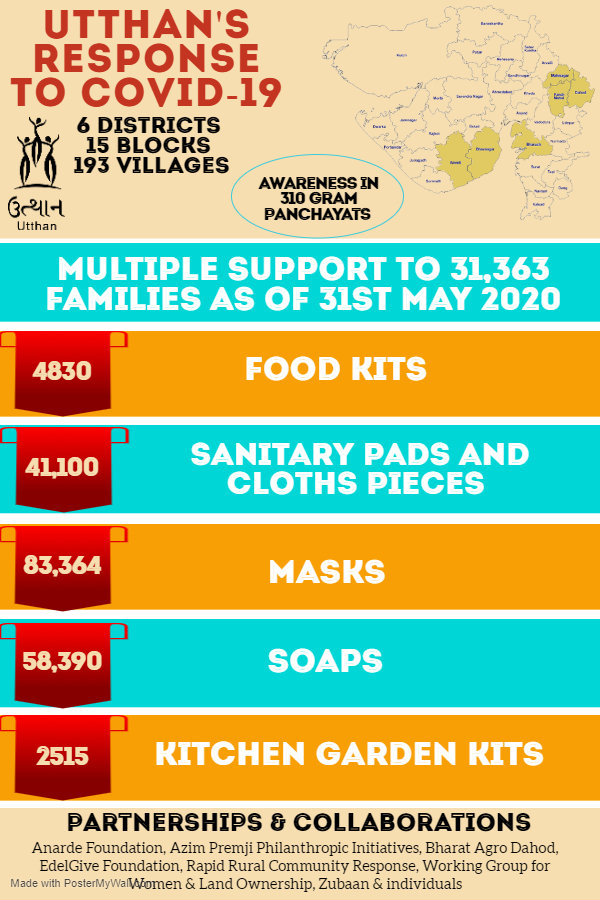 Responding to the crisis May 20

Stay Safe, Be Responsible
While we await clearances to India Projects, Utthan's team underwent a training to improve their skills in Socio Behavioural Change & Communication (SBCC). This helped team to understand SBCC models and clearly understand the steps of behavioural change.

We will be relooking at the design of our SBCC components for this Project so that we can further maxiimze impact.

Thank you to all our donors for their trust in Utthan's projects!

Currently  - all our strength and solidarity to health sector who are the forefront handling the Covid pandemic. Keeping the situation in mind Utthan has currently suspending village level events and engagement in the interest of our team and communities.

While we work on home, we use this time to relook at our work, what can work better, what is that we want to do differently, what may be the immediate needs when things get back to normal.

GlobalGiving
Guarantee
Donate https://www.globalgiving.org/dy/cart/view/gg.html?cmd=addItem&projid=27498&rf=microdata&frequency=ONCE&amount=25
Please Note
WARNING: Javascript is currently disabled or is not available in your browser. GlobalGiving makes extensive use of Javascript and will not function properly with Javascript disabled. Please enable Javascript and refresh this page.