Kindergarten education for 30 children in Kosovo 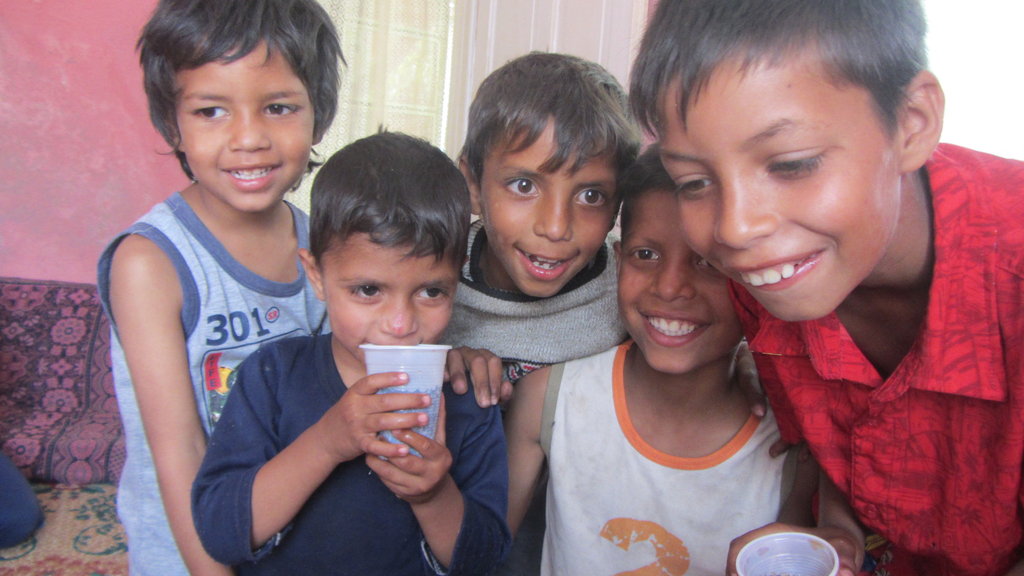 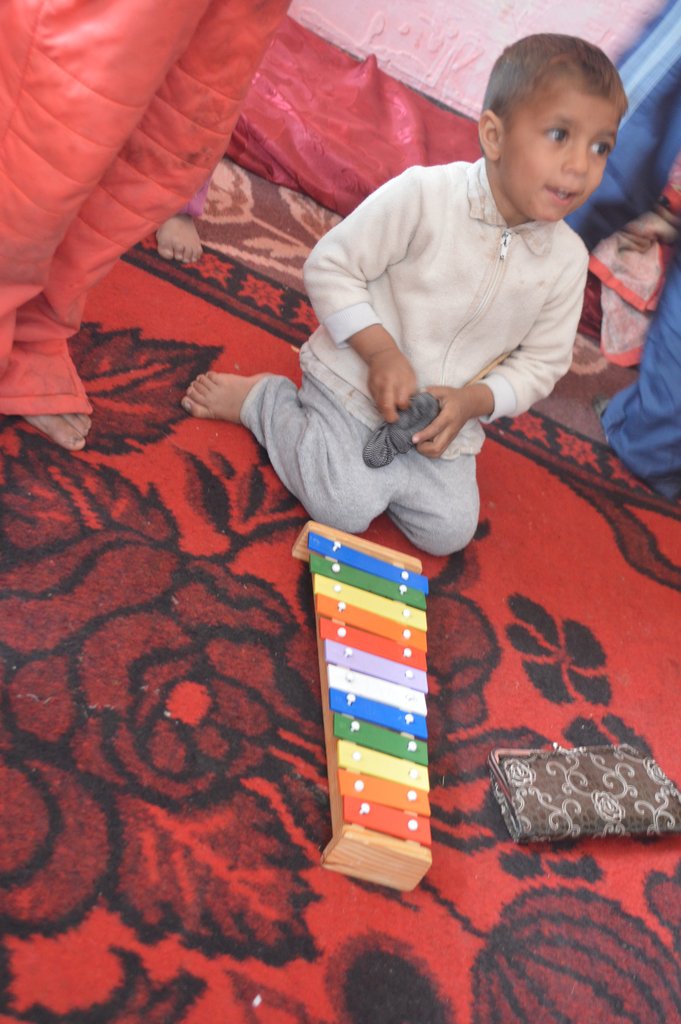 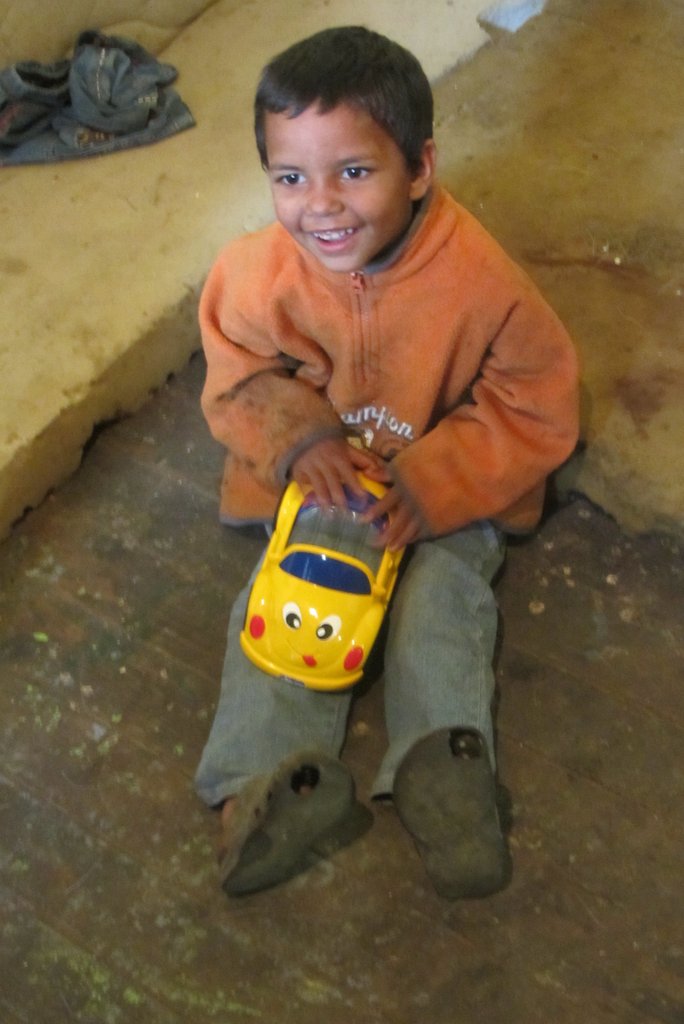 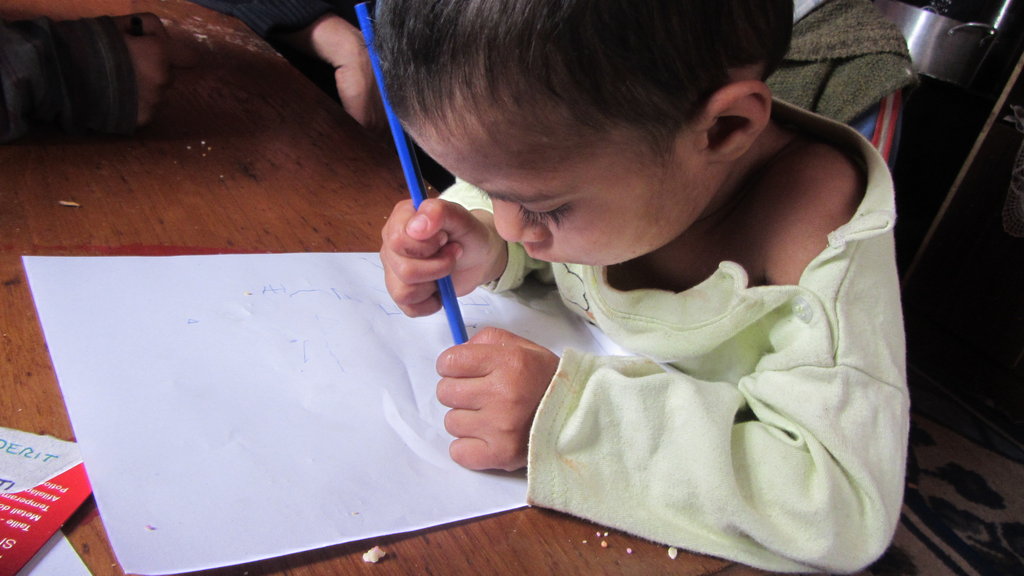 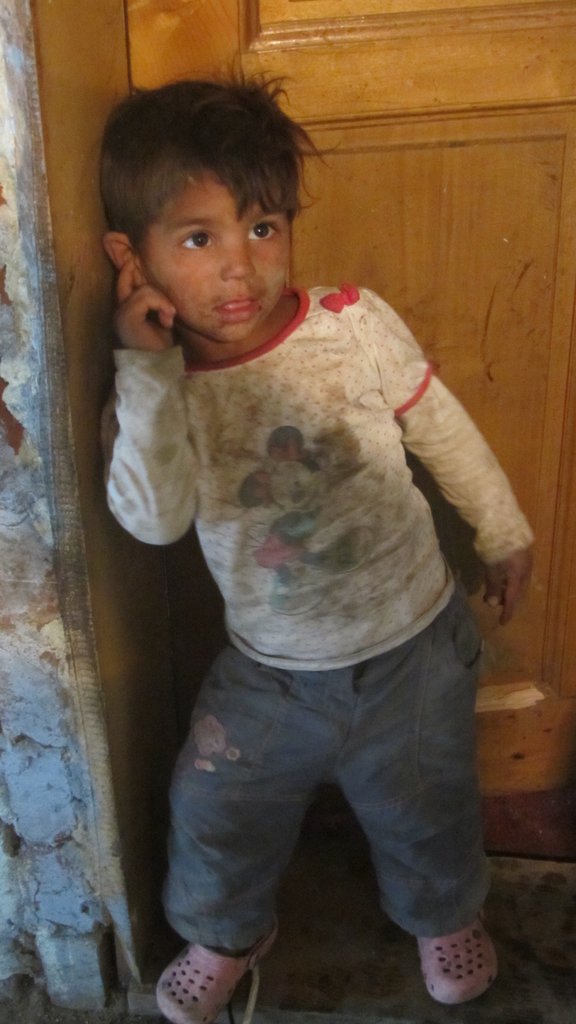 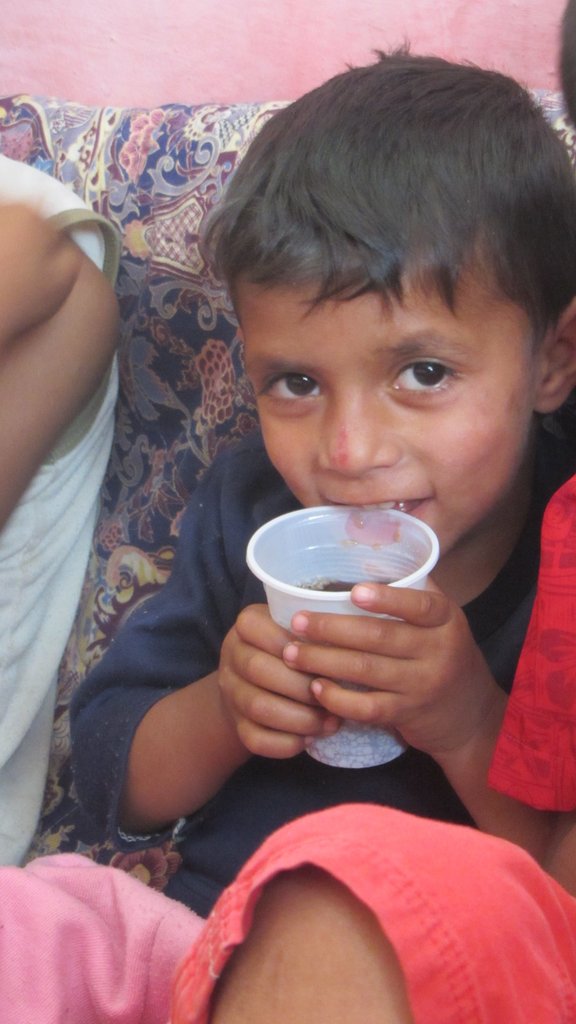 Goal reached! The pre-schoolers of Fushe Kosove say thank you :-) 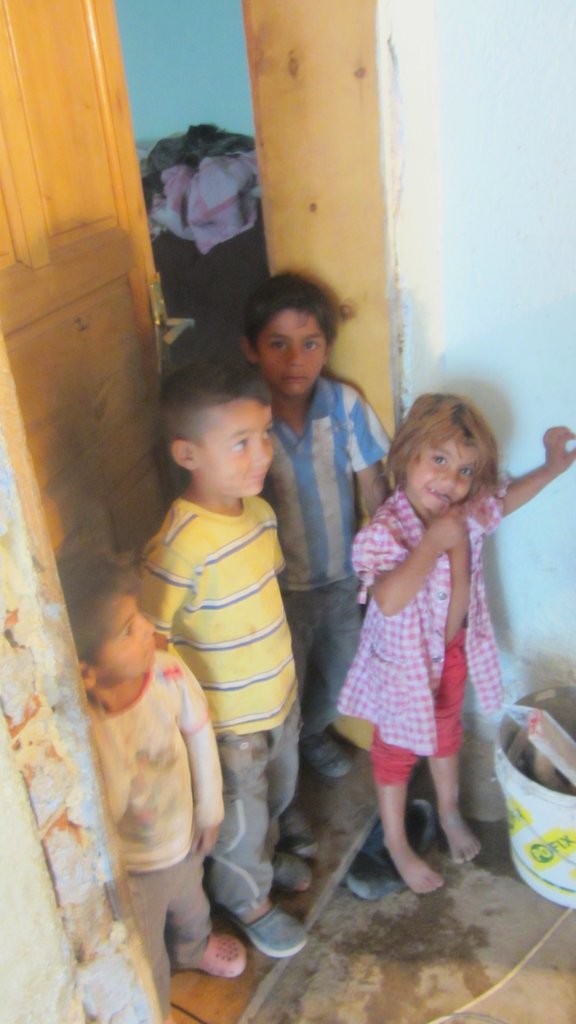 This week we reached our fundraising target meaning the kindergarten in Fushe Kosove is now fully funded for its first academic year; thank you!

Sometimes the changes brought by invisible things like education are hard to show. But at other times you can’t help but notice the difference – like the transformation that your donation brought about in the life of 4 year-old Magbule.

She is one of the children now attending the kindergarten you enabled us to open in this desperately poor community. In the summer, before we started fundraising for the kindergarten, I went to visit her house, because her brother was sick. The first picture shows her then.

When I walked into our new kindergarten less than half a year later, I found an almost unrecognizable child learning her first letters, as you'll see in the photograph of Magbule at the end of this report.

Talking to Magbule’s mum, Fana, she confirms how revolutionary this experience has been for her daughter. ‘My husband didn’t go to school at all and Magbule’s the first person in our family to go to kindergarten.’ We often hear about the significance of people who are the first in their family to go to university, but I can’t help thinking that the first time someone in a family experiences pre-school education might be an even more important step.

Fana sees the pre-school as just the beginning - ‘I want her to know things and to do well at school.’ She thinks Magbule is getting ready for that ‘she already knows what a teacher is, and when she gets up in the morning she talks about going to ‘school’ – she doesn’t call it ‘kindergarten’’.

Magbule’s dad, like most men in the community where Magbule’s growing up, earns a fragile income for his family from going through garbage to collect recyclable scrap. It doesn’t bring in much money for the family to have a nutritious diet, or for toys for Magbule and her brothers. When she’s asked what she likes most about the kindergarten Magbule smiles a dimpled grin. ‘The dolls. And…’ referring to the healthy snack your money pays for the children to have each day, ‘…the bananas.’

Magbule’s mum tells me about the commitment of the kindergarten team – ‘there were a few days when she didn’t go because her brother was ill, but one of the Changemakers came round with her teacher to find out why she hadn’t come to classes and it was a good reminder to us about how important it is. We made sure someone looked after her brother so I could take her to the centre the next day.’

I asked Fana if I could share the photographs of Magbule with people who’d given money to make her daughter’s education possible and whether there was anything she wanted me to write. She gestured outside her house, where her husband was pulling together a load of dirty bottles to sell at the recycling depot. ‘Please say thank you,’ she said. ‘They’ve made it possible for our kids to go to kindergarten and not to be out there in the street.’ 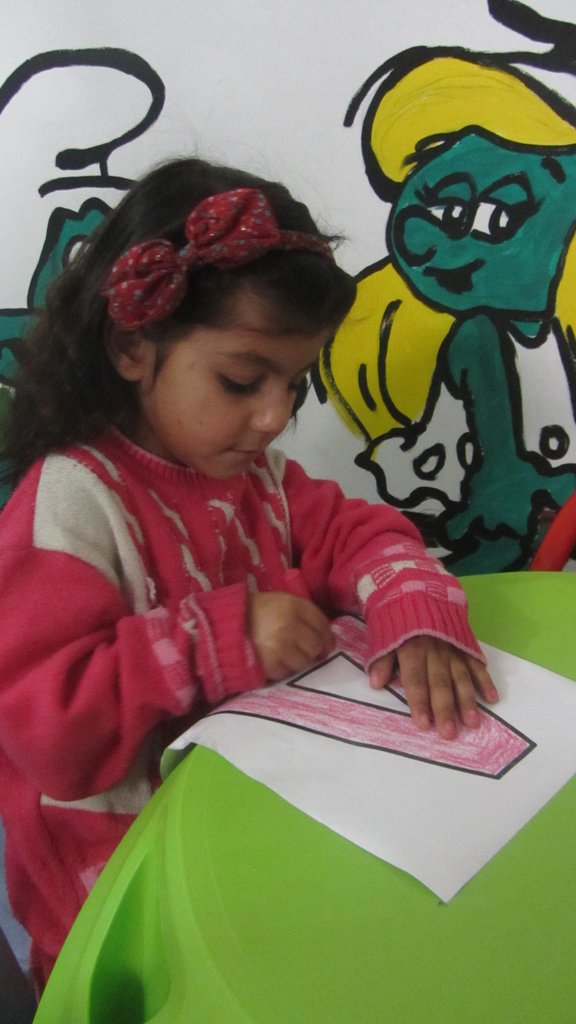 The waste-picker's daughter at pre-school 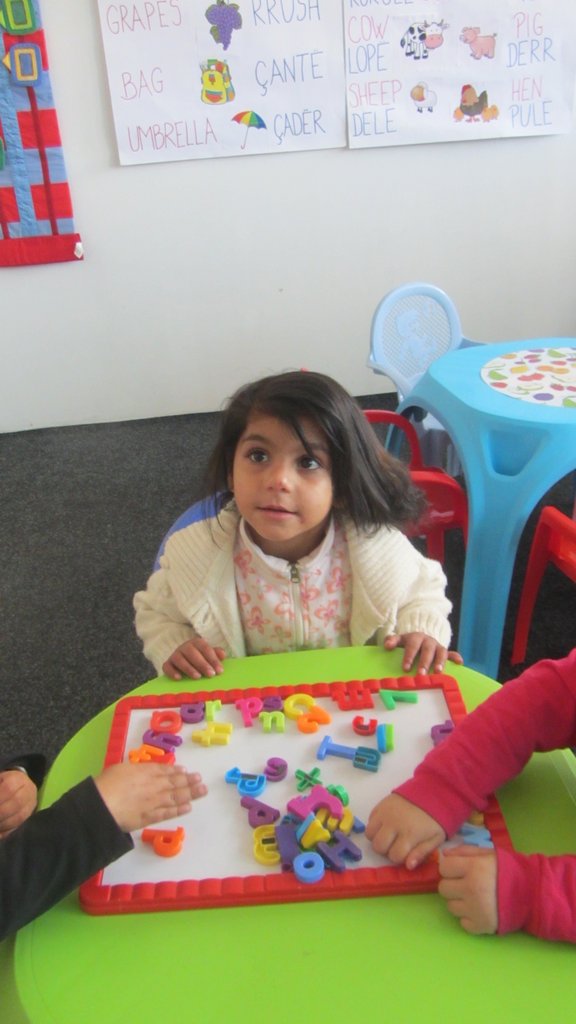 Off the rubbish heap and into pre-school

Elhame is a giggly four year-old who lives in the Roma, Ashkali and Egyptian community of Fushe Kosove, just outside Kosovo’s capital Prishtina. She likes it when her mum puts her hair in pigtails, but when she chases her brother the elastic bands slip out and her hair flies wild.

Elhame was born into a one-room home, shared with her parents and five brothers and sisters, with no running water. Like most men (and some children) in this community, her father goes out every day with his wheelbarrow to scavenge for scrap metal and other recyclables, and the small income he earns from this is what keeps his family. Elhame’s mother works hard looking after six children. She can’t read or write – like 96% of her community, she didn’t finish compulsory schooling.

Growing up in such circumstances, Elhame’s chances of getting to school, and thriving there, seem fragile. But her parents are determined that she’ll get the education they missed out on. When they heard that there was the chance for Elhame to get to kindergarten, they went to register her.

Why? Elhame’s dad shrugs as if it’s a stupid question

‘If she goes to kindergarten she’ll be smarter: she’ll play, she’ll learn; she’ll achieve something.’

Thanks to the money donated to The Ideas Partnership by GlobalGiving donors, Elhame’s kindergarten opened its doors in November. It has already given the chance for over thirty children to have their first encounter with the alphabet, with story time, with plasticene.

Having walked through the cold muddy streets of Fushe Kosove, past children who are barefoot and kids off to help their dads going through the garbage, it feels like a miracle to enter a warm room filled with primary colours and children singing. This is where Elhame learns every afternoon. It’s also here that, along with her classmates, she has had a healthy snack every day, giving valuable calories, proteins and vitamins to supplement the meagre diet that her father’s scavenging provides. With help from her boundlessly energetic young teacher, and assistants from her own community, Elhame has already learned her first nursery rhyme and one of her pictures is ready to go up on the wall.

This is just the beginning, but by the time she leaves our pre-school Elhame will be prepared for primary school; used to turning up every day for lessons, familiar with the building blocks of formal learning, and – just as her dad predicted – ready to succeed.

Support another project run by The Ideas Partnership that needs your help, such as: 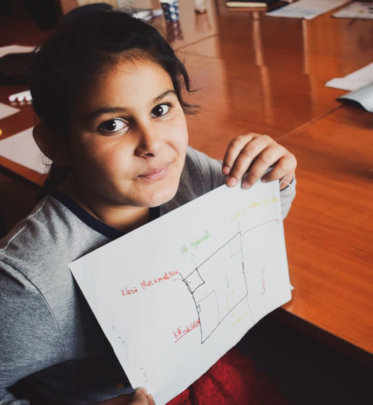 A new centre for new opportunities
Find a Project

GlobalGiving
Guarantee
Donate https://www.globalgiving.org/dy/cart/view/gg.html?cmd=addItem&projid=18139&rf=microdata&frequency=ONCE&amount=25
Please Note
WARNING: Javascript is currently disabled or is not available in your browser. GlobalGiving makes extensive use of Javascript and will not function properly with Javascript disabled. Please enable Javascript and refresh this page.