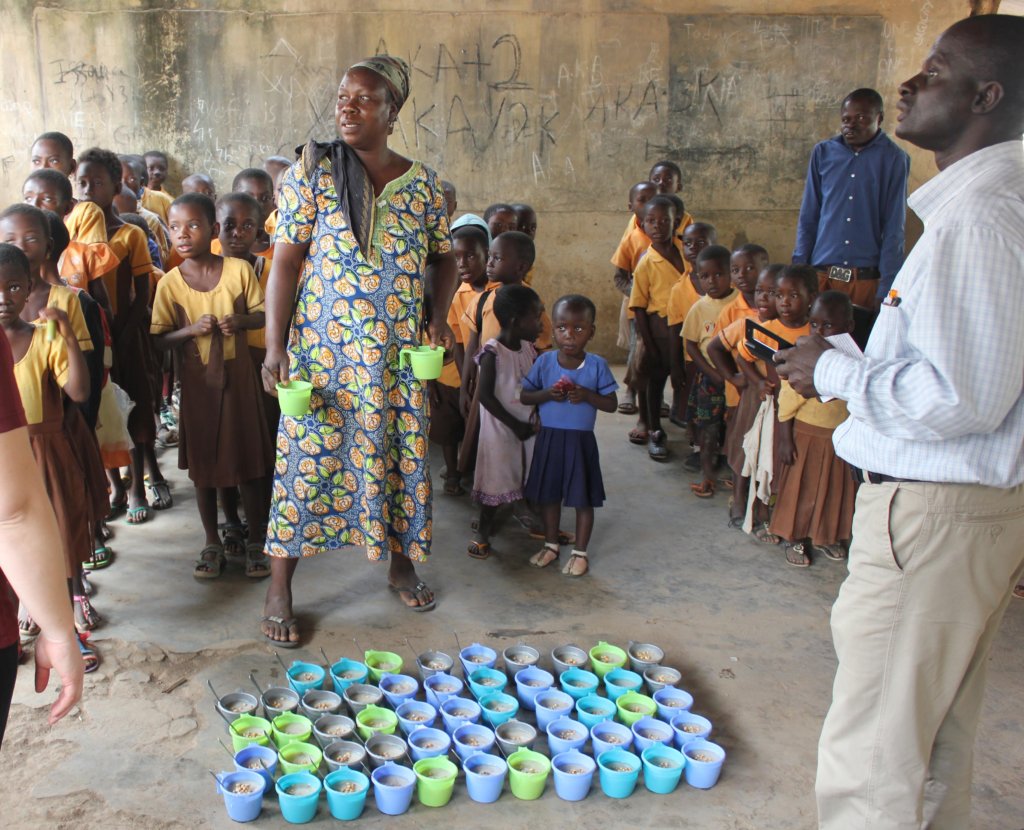 Students line up for porridge at Bedabour D/A

Bedaabour is a rural village of about 1,000 people within the Atwima Mponua District in the Ashanti Region of Ghana. There are two schools in the community, both of which benefit from the Quality Protein Maize (QPM) feeding program: Bedabour District Assembly (D/A) Basic School and Bedabour Islamic School.

Bedabour D/A School is a public school supported by the District Assembly. The government initially provided meals for the pupils under the Ghana National School Feeding Program, but the program was cut due to limited state funding.  So in early 2013, Self-Help introduced the QPM school feeding program to fill the gap, and the community initially embraced it knowing its importance. As the program started, the chief of the community supported it by donating QPM and funds for milling so the maize could be turned into porridge. This went on for some time, but the support ceased when the chief became ill.

The school feeding program follows a partnership model whereby the community is responsible for donating the maize, milling it, and preparing it into porridge daily, and Self-Help provides the additional inputs such as sugar, cups, spoons, training, and support with construction of a proper kitchen. The community members were used to the chief taking care of everything on behalf of the community, and for a long time, no one else stepped up to donate the maize or milling fees during his illness. Without the community’s support, the program began to falter. There was apathy and lack of commitment.

In 2014, the neighboring Bedaabour Islamic School joined the school feeding program. The school saw significant improvements in both enrollment figures and academic performance, which they attributed to the feeding program. Both parents and teachers were committed. The strong performance by the Islamic school caught the attention of the community, and many parents began transferring their children out of the public school and into the private school, regardless of the family’s religious affiliation. The D/A school was therefore losing many of their pupils in the lower grades in particular to the Bedaabour Islamic School.

The D/A school PTA realized something had to be done before the school collapsed, so in March 2015, the PTA chairman met with the school staff and Self-Help representatives to discuss the challenges the school was facing. They decided to call a full PTA meeting so that members could contribute to raising up the school’s image and getting the QPM feeding program back on track. All teachers and most parents attended the meeting to discuss the issues, and by the end of the meeting, solutions were found.

Realizing that the quality of their children’s education, and therefore their futures, were at stake, all present agreed to support the feeding program in one way or another:

All of these actions were necessary to get the feeding program back on track, but the community didn't stop there:

The commitment and spirit of togetherness that the PTA is now demonstrating towards the feeding program has brought about a lot of improvements at the Bedabour D/A School. Enrollment has increased, malnutrition has decreased, and the children are healthier and good looking. Truancy is low since every child wants to come to school and eat QPM prepared breakfast.

Thank you for your support of the school feeding programs in Bedabour community.  This initiative is much more than a breakfast and source of nutrition: it is a catalyst for engaging parents in the nutritional and educational well-being of their children. With your continued financial support, we will be able to help the PTA chairman achieve his dream of regularly adding more nutrients to the porridge. 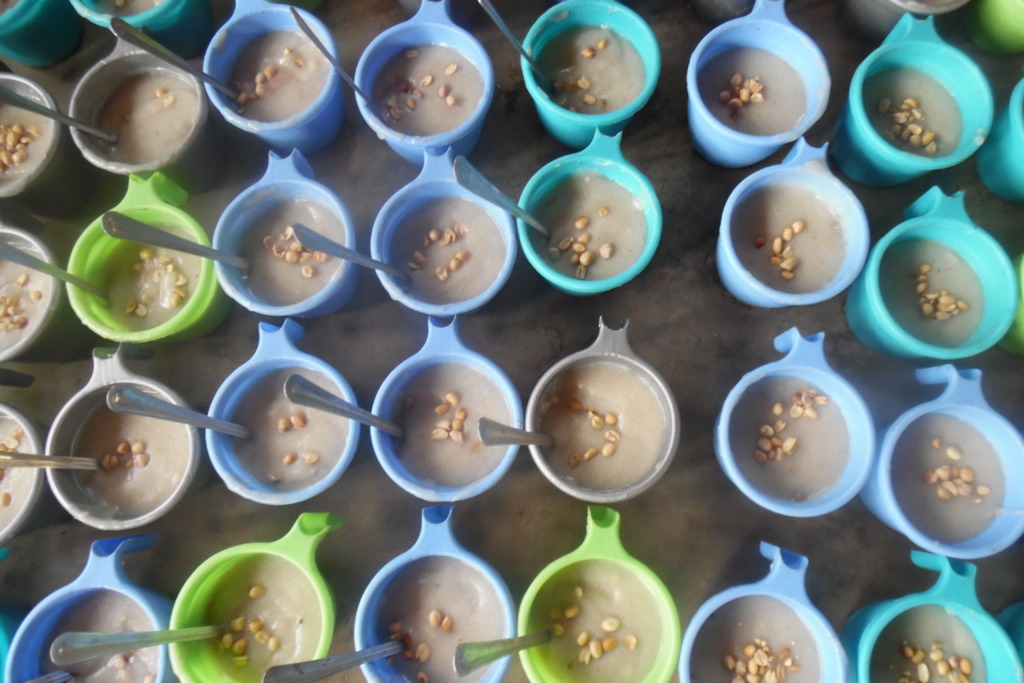 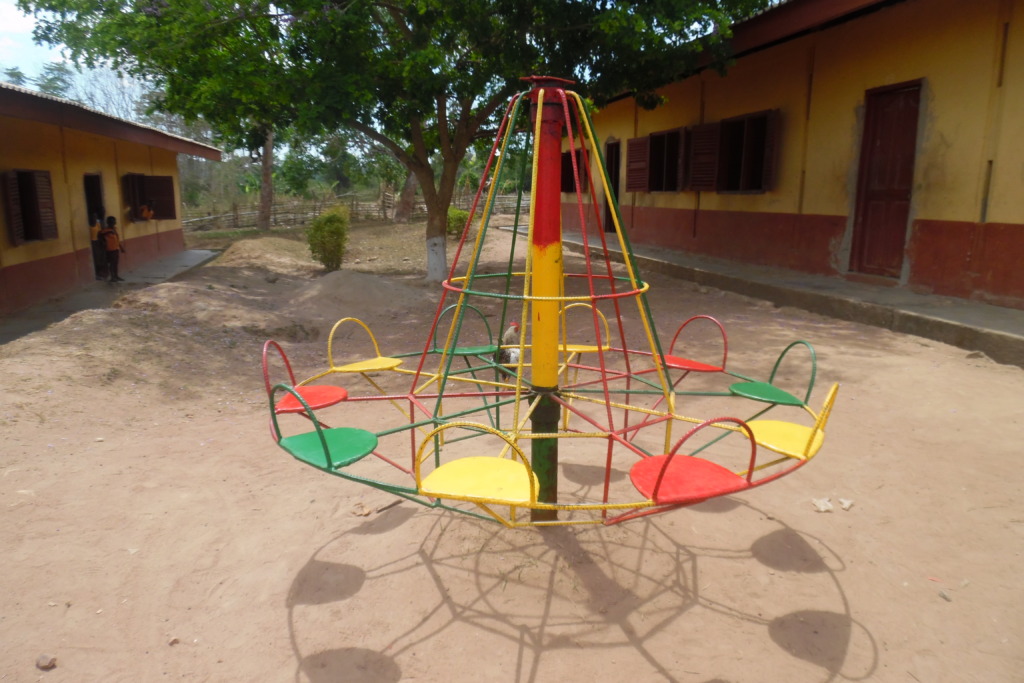 A new merry-go-round brings joy to the children 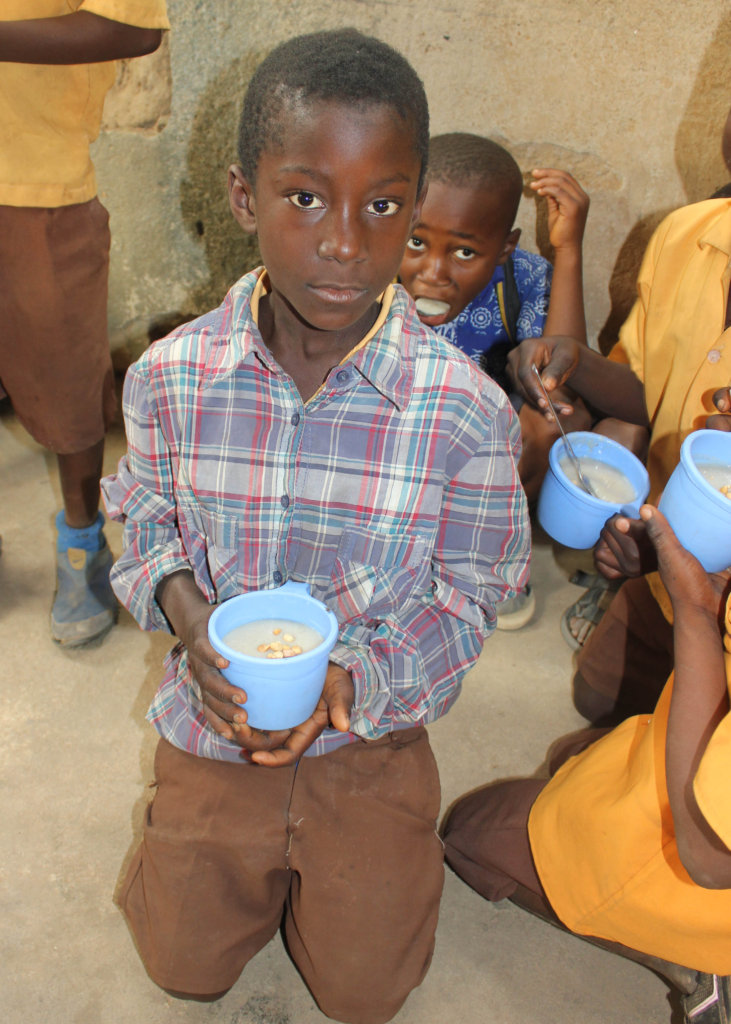