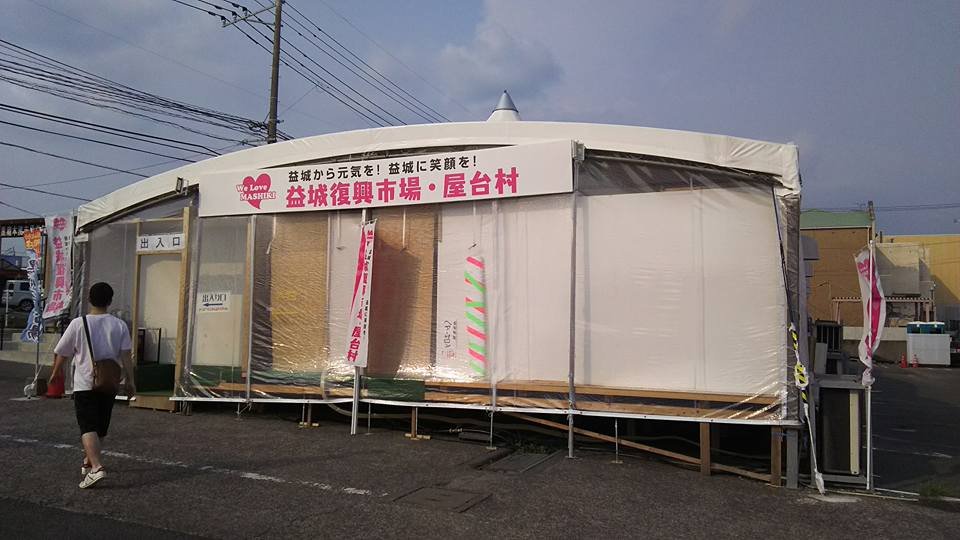 In August 8, 2016, the Kamaishi Kitchen Car team was in Mashikicho, Kumamoto Prefecture, to discuss about the future support plan to the Kumamoto Kitchen Car team, since people in emergency shelters are moving into temporary houses. As of this date, 641 people are still in 10 Mashikicho shelters, 130 people in 4 Minami-Aso Village ones, and 53 people in Nishihara Village ones. They will be moving to one location during October and then to temporary houses by the end of this year. Given this situational changes, the project will soon shift its strategy from providing food at emergency shelters to more extensive collaboration with diverse NGOs and local Social Welfare Councils (Shakai Fukushi Kyogikai) to serve food at temporary houses, build communities for disaster-stricken people, and continue to offer psychological cares. The Kamaishi team tries to support these shifts, especially because they learned that this shifts is extremely important in a difficult way.

One disaster-stricken former restaurant owner plans to start operating his kitchen car from October, while the Kumamoto team has two kitchen cars donated by the Kamaishi team. It seems that those who developed a temporary food village, called “Yataimura” which is shown by pictures, may not be able to operate the place for a long time due to several problems they are facing. They may be willing to shift to kitchen car operations or join the new efforts of community building supported by the Kamaishi team.

Here is what the Kamaishi team has discussed with diverse local partners.

The Kamaishi team could not visit Mashikicho in October due to the shortage of fund. But being grateful to a grant offered by GlobalGiving, it can start making more support to local people and make periodical visits to Mashikicho. The team was extremely thankful to those who made the team’s important support to disaster-stricken people in the Kumamoto Earthquake Disaster. 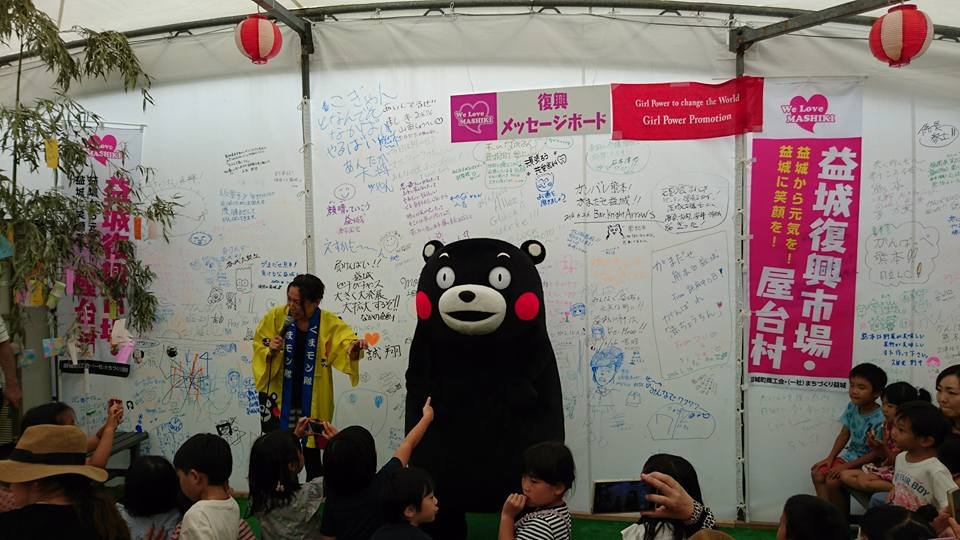 Kumamon in a Yataimura event 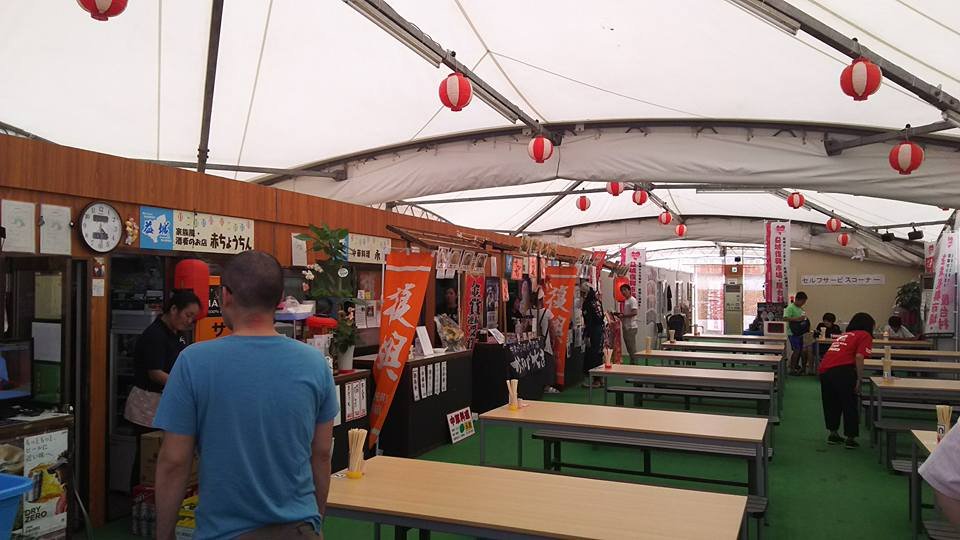 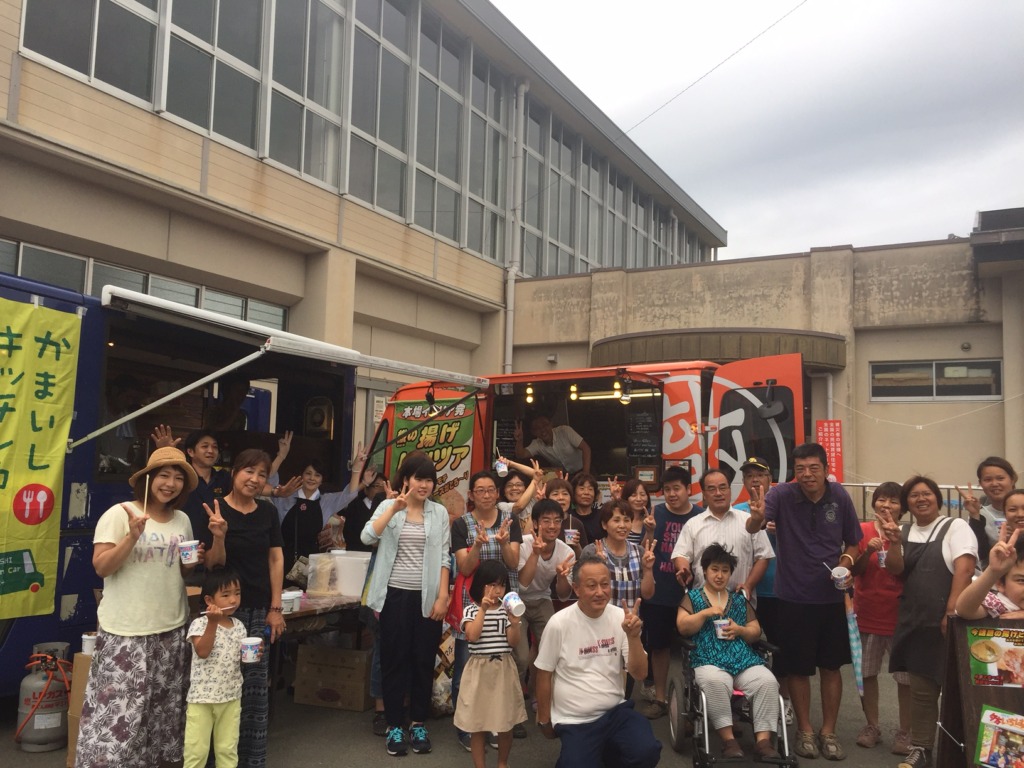 Three Kamaishi Kitchen Car (KKC) members including the Head of the KCC project, drove one kitchen car and one air-conditioned roomette about 1,750 km from Kamaishi City to Mashiki Township (Mashikicho) in Kumamoto Prefecture in June. They carried ingredients good for 800 servings of food and also specialty and other food products good for 400 servings entrusted by companies and local government offices in Tohoku to carry to develop cooperative relations between two disaster-stricken areas. Since they have experienced the East Japan Earth Quake and Tsunami of March 2011, they really know the pain and unserved needs of disaster-stricken people.

In Mashikicho, the School Lunch Supply Center was completely destroyed, and will not be rebuilt for two more years. Since children are purchasing bread and lunch boxes from convenience stores, mothers started expressing their concern about the health conditions of their children. Thus, when they arrived at Masikicho, as the first service of the kitchen cars, they started offering 200 serving of food at Hiroyasu Elementary School (see Picture 1) which was used as an emergency and temporary shelter. There, about ten high school and university student volunteers constantly help people in the temporary shelter and kitchen car operations.

Then, they operated at the Children Life Education Care (LEC) Center, where 100 emotionally disturbed children live and receive treatments. Due to the disaster situation, no summer festival was scheduled, disappointing them. Although they are usually not allowed to interact with outside people, because of KKC’s earlier involvement with the LEC Center, three KKC members were given a special permission to offer heart-warming interactions with the children by serving Ishinomaki Yakisoba, shaved ice, and decorated chocolate banana (see Picture 2). People operating the Center expressed their gratitude, saying that they have never seen children smiling and expressing joy this much after the earthquake disaster. Given the reward of children’s smiling faces, KCC members willingly promised to come back to contribute to ease the stresses of children.

Three KCC members also created one night of people’s gathering at Nishihara Village, where food serving by unlicensed people has been banned because of food poisoning incidents. In cooperation with a local NPO, the KCC members invited 200 local residents, served Tohoku specialty food, and held a small concert. Since the village has no restaurant operating now, villagers found an unusual opportunity of eating outside and getting together with others. They felt really relieved from daily stresses living in the disaster-stricken situation. The KCC members promised to come back to organize another similar event at their next visit.

The first day of the KCC’s Kumamoto operation on June 16 started by explaining how the KCC was operated in Kamaishi City to officials from Mashikicho and demonstrating the actual cooking and serving of “Kamaishi Noodle” to 150 participants. Also, ten disaster-stricken restaurant owners who have been informed of this session from the Mashikicho Shokokai (Mashikicho Commerce and Industry Association).

Then later, the Head of the KCC project met the Mayer of Mashikicho and a Prefectural Assembly Member from this district. He read a message from the Kamaishi City Mayor who expressed to offer support and help to Mashikicho to overcome difficulties caused by the disaster. And they all discussed about potential future cooperation.

In the evening, a special session was organized particularly to explain the kitchen car operation to the ten disaster-stricken restaurant owners. This session explained how to operate kitchen cars and develop the support system and what necessary costs and available subsidies from the government are. Then, they went inside the KCC-provided kitchen car and the Kumamoto-team-operated “Fried Pizza” kitchen car. The next day, these ten owners helped actual operation by serving “Ishimaki Yakisoba,” “Fried Pizza” and “Shaved Ice.” Those restaurant owners, for the first time after the disaster, had a chance to actually cook food for their customers. They were so pleased with their experiences that they expressed their hope to start operating kitchen cars as soon as possible. As a matter of fact, a few owners were planning to start their business by borrowing a space in a newly established complex for “Temporary Redevelopment Market.” Despite so, they wished to start using a kitchen car, simply because the new restaurant space is very small, because the Market is expected to last only for one year, and greatly because the location is too far away from where their old customers live. In this sense, a kitchen car does not require any space other than a parking spot and can operate where their old customers live. Fascinated with the idea of developing a venture, already five restaurant owners have already requested some support from the several levels of governments and the Mashikicho Commerce and Industry Association.

One kitchen car brought this time from Kamaishi City was loaned for free to the Kumamoto Catering Association to be used for training. This also means that KCC still continues to support Kumamoto kitchen car operations, while they do not have to drive 1,750 km from Kamaishi to Mashikicho. A roomette car actually had a spacy room with an air condition facility (see Picture 3). This was also loaned for free to a young restaurant owner with a child as their living quarter, rather than being used as a restaurant. Through e-mails and telephone, the KCC is offering advises, even to help to write up a business plan.

In the first week of August, four people from the KCC on their own kitchen cars loaded with food visited Mashikicho to help the restaurant owners to develop their business plans as well as to give on-the-job training, while they continued to offer food to emotionally disturbed children at the LEC Center as well as to people in Minami Aso Village. Since some people started moving into temporary housing and since the number of people remaining in a temporary shelter is declining, good planning for locations and the amount of food to be prepared had to be well planned.

So far, the KCC has been extremely successful not only to serve the needs of local people by providing food and psychological care, but also to stimulate disaster-stricken restaurant owners to start planning to operate their own kitchen cars, possibly being financially supported by government offices and the local Commerce and Industry Association. The KCC is pioneering to reactivate disaster-stricken local economy. However, a question is how long can they continue to help, since they are finding it difficult to obtaining funding for their operations. Although they received donations for food to be delivered to disaster-stricken people in Kumamoto, they are financing some portion of served food by themselves, suggesting that they are financing most of their operations including traveling by themselves. Unless they find some sources of financing, this operation may not last long, despite enormous unmet needs of local people in Kumamoto. 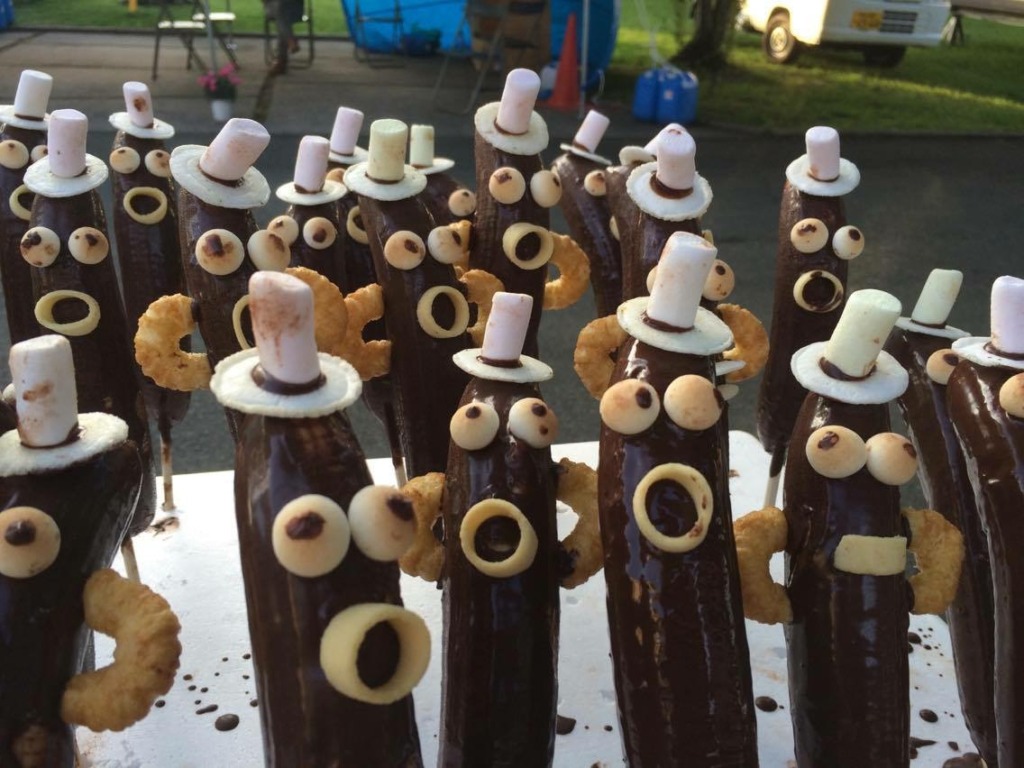 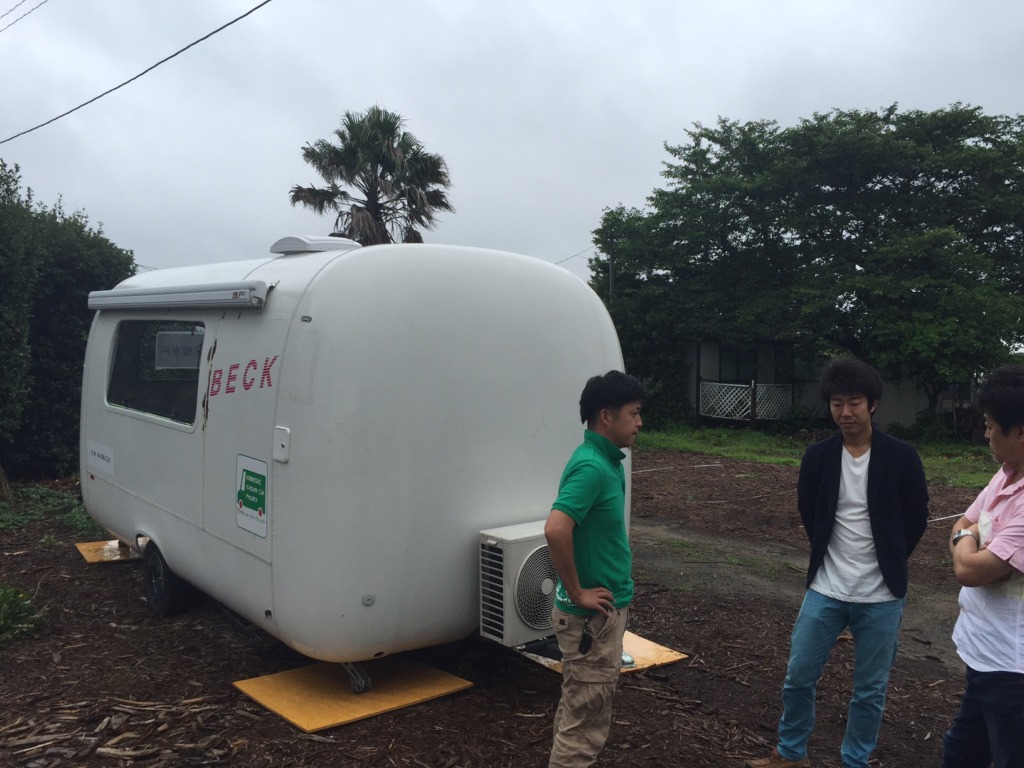