Help Stop Slash and Burn Farming in the Congo 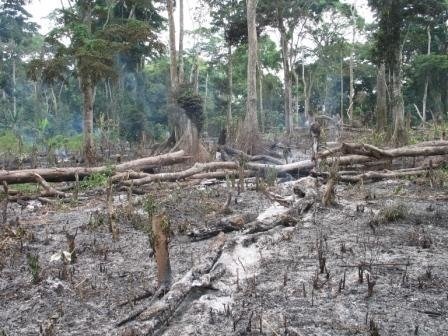 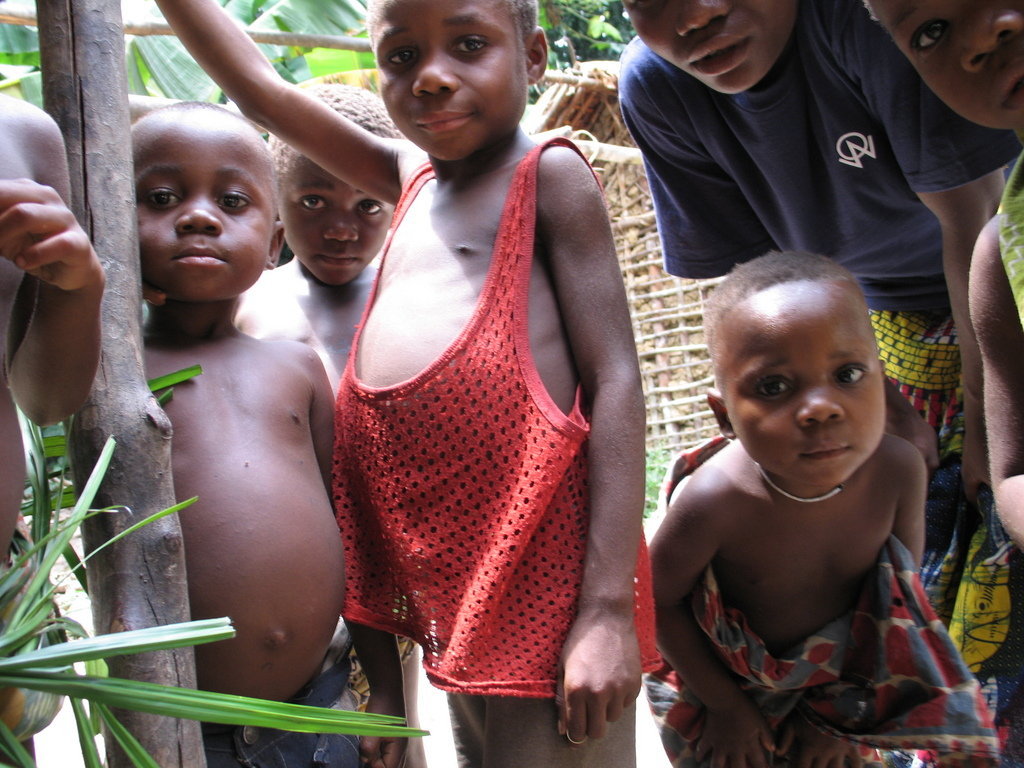 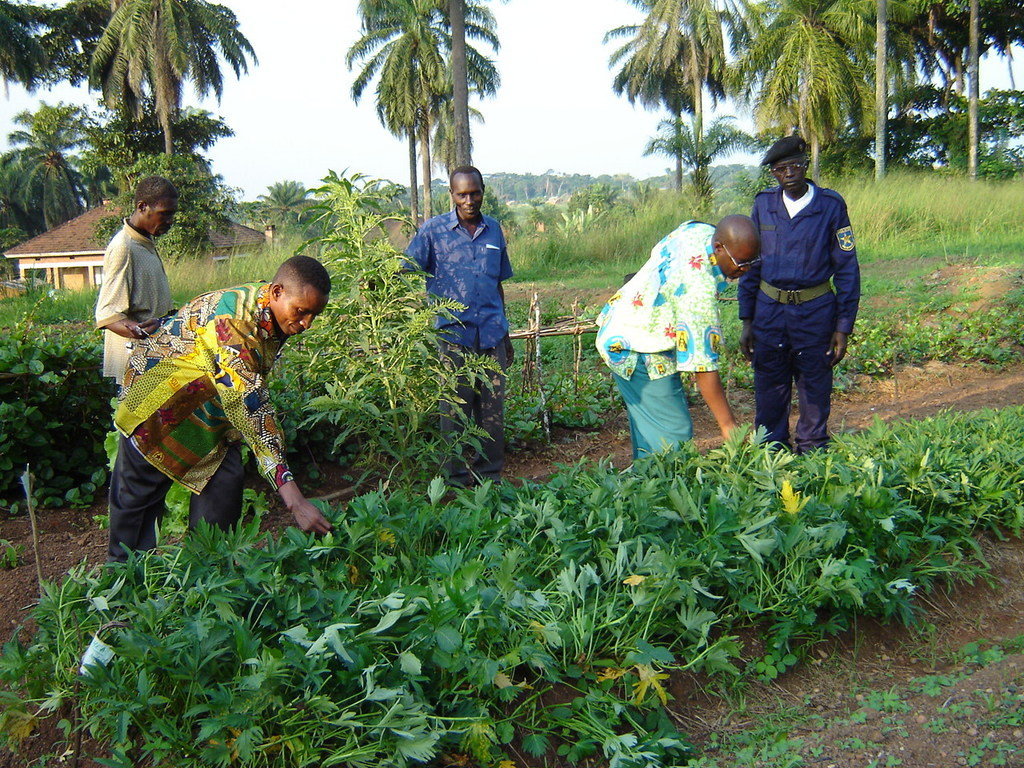 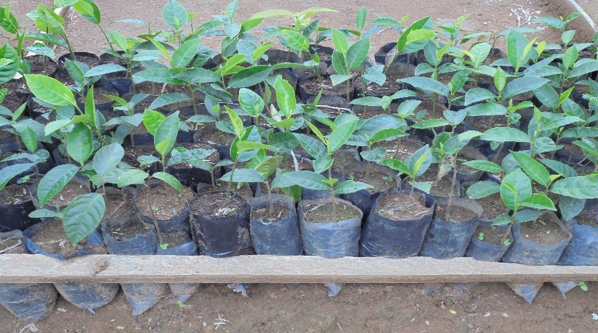 The success of the agroforestry program has contributed to a noticeable decline in slash and burn agriculture within the Reserve. After a recent trip to Epulu in July, we saw no evidence of farmers expanding beyond the 32 designated agricultural areas and encroaching into the forest. The farmers have noticed an increase in food production of their plots by utilizing the techniques that preserve and lengthen the life of the soils.

Because of the program’s success OCP is looking to expand to Mungbere and Wamba where at least 100 farmers are anxiously waiting to join the program. Expansion to these areas will give us greater coverage that is evenly distributed throughout the Reserve. Building excitement for the program and trust with OCP opens the door to create dialogue about the conservation of the forest and the animals.

The expansion of this program is only possible when areas are secure. The increased guards and patrols in the northern sector of the Reserve have opened up the opportunity to provide the agroforestry programs to that previously unpatrolled area.

The support of people like you from around the world makes the challenging work of protecting wildlife possible! Join us to help save the animals, plants and people that live in this unique forest. 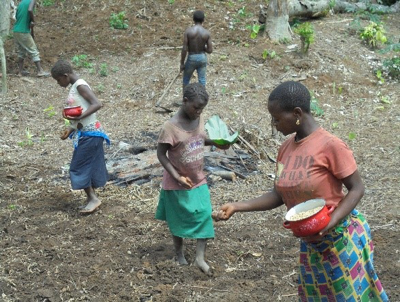 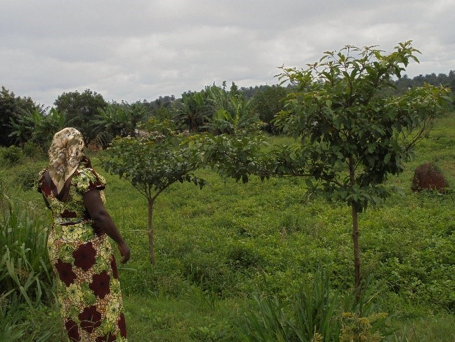 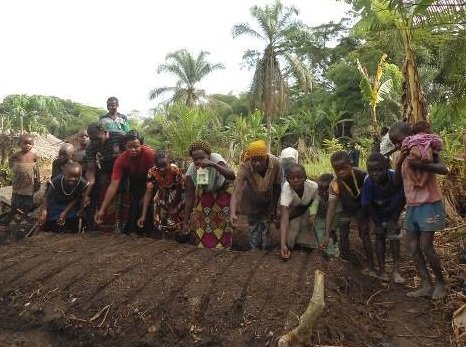 OCP has been assisting communities throughout the Okapi Wildlife Reserve to improve their food security. The agroforestry program has gained popularity among the farmers in more remote areas of the reserve, allowing OCP educators to make inroads to areas not previously receptive to conservation efforts.

Since the success of the program depends on secure areas, the increase of patrols has allowed more farmers to commit their participation. However, the poor road conditions still hinder outreach and education, especially during the rainy season. Because of the programs high demand, OCP is trying to surmount the difficult conditions in order to bring sustainable farming practices to more farmers living in and around  the reserve, thus reducing the rate of conversion of forest to agriculture and helping preserve the critical habitat needed for the endangered okapi.

OCP also operates 11 demonstration gardens to pique the interest of passers-by and teach them about crop selection, crop rotation and row planting to improve their crop yield. Caring about the needs of people opens doors for conversations about why we care about them and their communities – we need their help to conserve critical okapi habitat. Because we work to improve the livelihoods of the communities around the reserve, they are directly involved in helping preserve okapi habitat – as a result 95% of the forest cover remains intact in the Ituri basin.

The support of conservationists from around the world makes the challenging work of protecting okapi and this unique forest teaming with biodiversity possible! 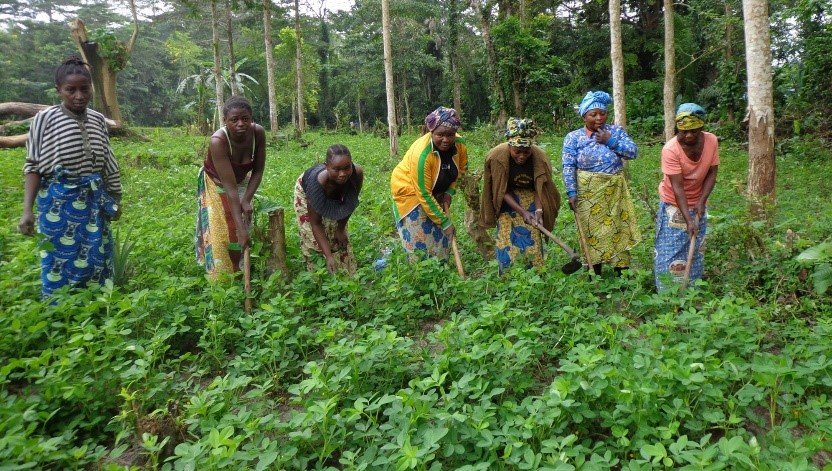 Planting in the Reserve 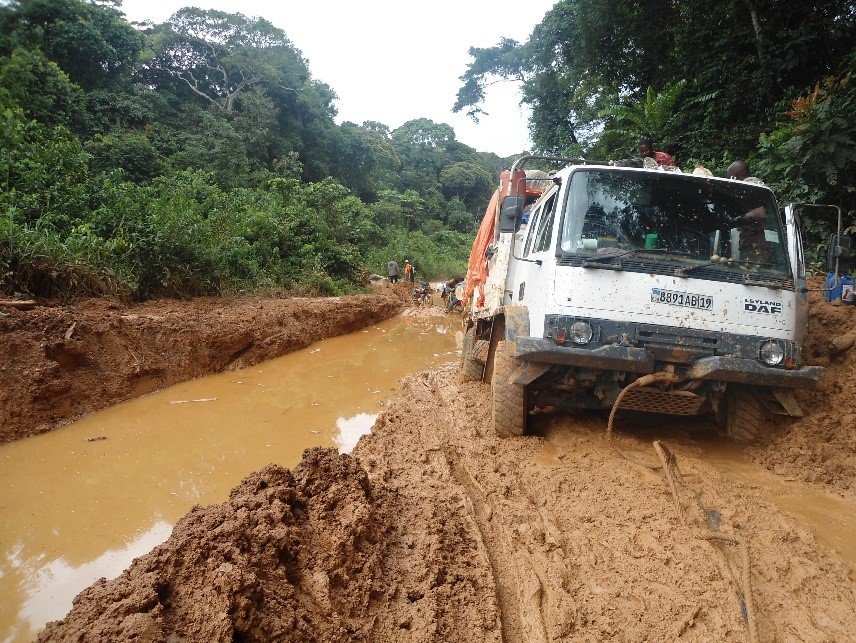 Road Conditions within the Reserve 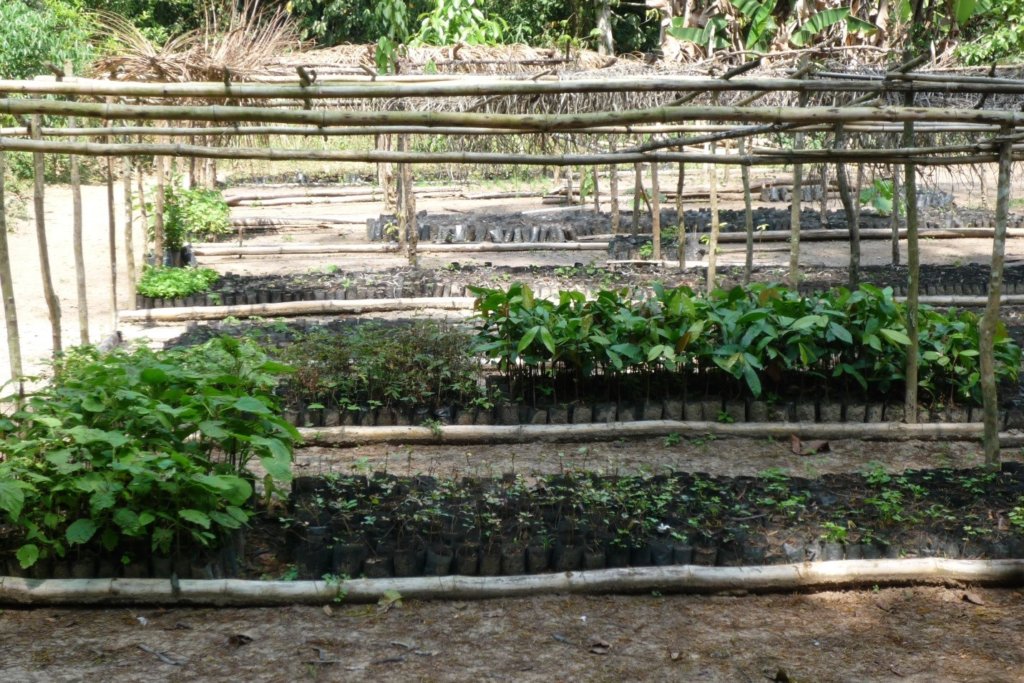 The Okapi Conservation Project educators and agronomists continue bringing the message of sustainable agricultural practices and forest resource conservation to communities living in and around the Okapi Wildlife Reserve. Our 18 demonstration gardens situated around the Reserve draw people as they pass by on foot, bicycles and motorbikes. The genuine interest of the people in how they can change their crop selection, crop rotation and planting schedules to improve crop production is making a broad impact across the region in reducing land degraded by slash and burn agricultural practices.

The past year we have been able to admit many new farmers to our program. The OCP agroforestry team provided tools, and seeds to 553 farmers this year and distributed 38,500 tree seedlings. As we enter a new year we look forward to being able to serve many more interested farmers around the Reserve that are  currently on our waiting list.  There is a direct relationship between improving food production and a reduction in illegal activities. As people grow more food they can sell the surplus for cash to buy much needed basic supplies and pay for health care. There is a reduced need to get involved in dangerous illegal poaching and mining operations to make money to take care of your family.

By tying our support to better stewardship of forest resources, wildlife benefits and people benefit. Caring about the needs of people opens the door for conversations about why we care about them – we just want their help in conserving wildlife habitat. It is working; 95% of the forest cover remains intact in the Ituri Basin which encompasses 45,000 sq.km!

The Okapi Wildlife Reserve, a World Heritage Site, is one of the most bio diverse sites in all of Africa, and is home to the largest populations of Forest elephant, okapi and chimpanzees in DR Congo. We are grateful for the many supporters from around the world that support this important work! 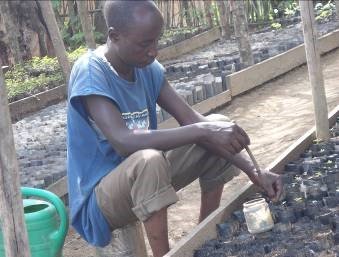 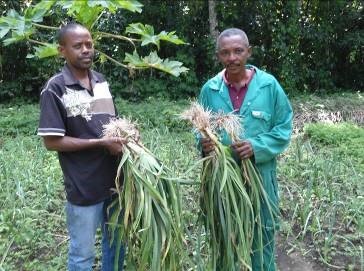 Educating School Youth and Officials on the Value 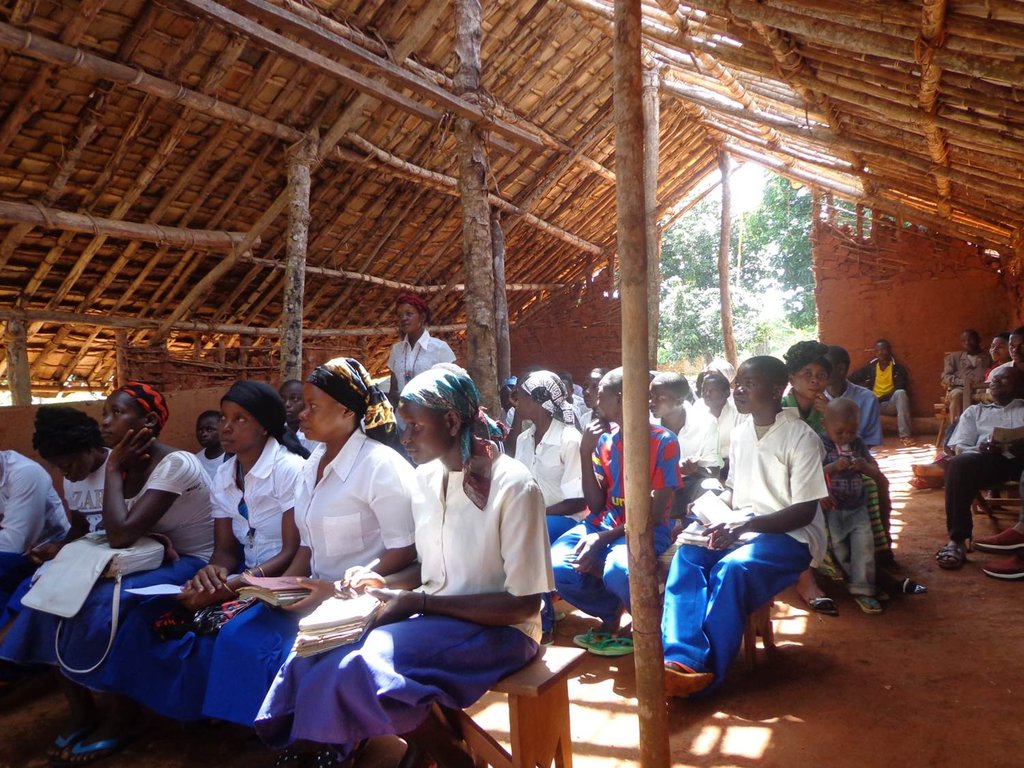 Okapi Conservation Project educators focus on working with schools in communities that interface with forest resources and the Okapi Wildlife Reserve. Students are considered important message multipliers and future decision-makers. In order to make them aware of conservation issues, OCP educators organized a series of conferences on forest protection and management of the Okapi Wildlife Reserve for secondary school children in Isiro, Watsa and Bunia. All three communities are district headquarters for territories that encompass the Reserve.

This far ranging trip involved the participation of 17 people, traveling in a pickup and riding several motorbikes. Over 2400 kilometers were covered, sometimes over very difficult muddy tracks, to bring the program to 2206 students attending 33 schools. This is the fifth time OCP has organized such a challenging public awareness campaign, involving students, school leaders and local media.

The conference participants openly discussed the nature of the threats to the forest as well as the unique conservation value of okapi and the Reserve. As an example of how the educators reach the students in Isiro protected animal posters were explained and distributed to schools for zoology lessons and 20 soccer balls as well as soccer equipment were donated for an upcoming interschool tournament.

Given the interest of students in the conservation message, we feel that a good number of them will show an improved respect for the environment, share what they learned with their families and friends and have better attitude about accepting the restrictions on the use of natural resources allowed inside the Reserve.

During the trip OCP staff took the opportunity to meet with local government officials and host seminars. Nearly 100 officials participated in this activity alongside District Commissioners and Territory Administrators in Isiro, Watsa and Bunia. Conservation law brochures produced by OCP were handed out for their offices and staff. The OCP education team took advantage of the seminars to explain the reasons and procedures of closing mining camps, the importance of honoring the boundaries of the Reserve and the need to promote the conservation of nature as one of their defined roles as community leaders. 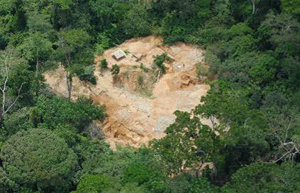 Illegal Gold Mine on the Reserve

After a three month amnesty period declared in August of 2014 by Governor Saidi of Orientale Province, a special force of ICCN guards and Congolese military has been moving through the Reserve shutting down illegally operated gold mines. To date over 20 mining camps have been evacuated with an estimated 5,000 miners moving out of camps as a result of public awareness campaigns.

ICCN guards will undertake continued surveillance of the closed gold mines to prevent the re-establishment of the mining operations and allow for regeneration of the forest. Recent surveys show that wildlife quickly returns to areas around abandoned mines once the human disturbances are removed. Monthly reconnaissance trips during the next year by ICCN patrol units are planned to prevent the mines from being reoccupied.

Progress made by the ICCN and the Congolese army to clear out armed militia, poachers and now miners is truly a remarkable achievement given the lack of government resources to impose law and order in the region. The brave actions of all those involved, and the support of all partners and OCP staff to secure the okapi wildlife reserve with a minimum impact on local communities is truly commendable. 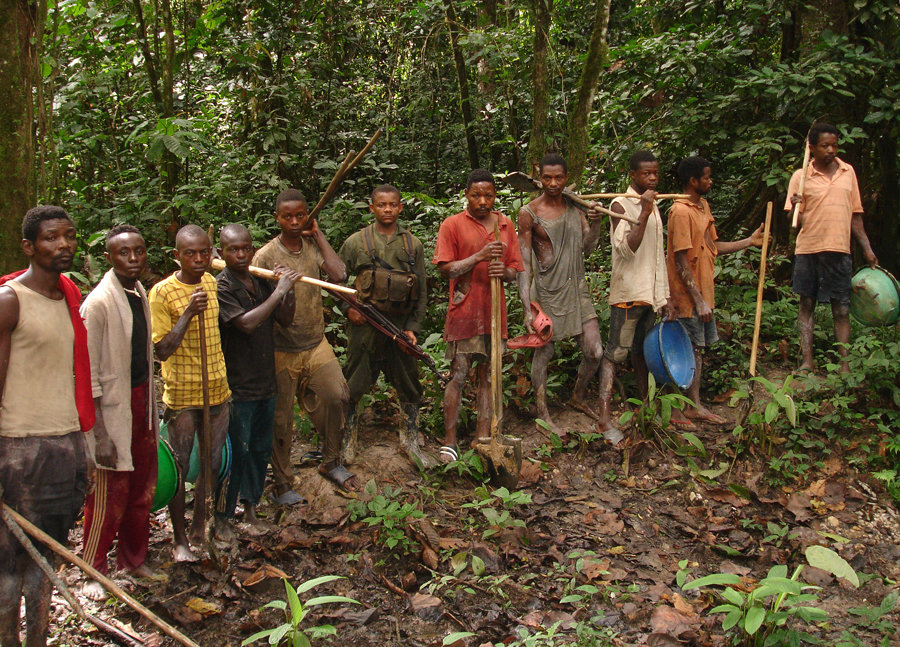 Donating through GlobalGiving is safe, secure, and easy with many payment options to choose from. View other ways to donate
Wildlife Conservation Global has earned this recognition on GlobalGiving:

GlobalGiving
Guarantee
Donate https://www.globalgiving.org/dy/cart/view/gg.html?cmd=addItem&projid=5709&rf=microdata&frequency=ONCE&amount=25
Please Note
WARNING: Javascript is currently disabled or is not available in your browser. GlobalGiving makes extensive use of Javascript and will not function properly with Javascript disabled. Please enable Javascript and refresh this page.