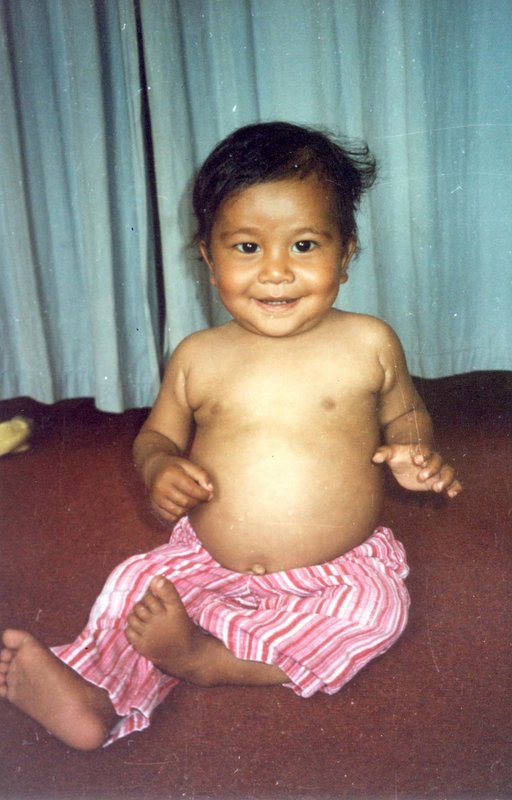 Then: Tara restored to health in the early days

Your donation to save a child from life-threatening malnutrition can be matched by GlobalGiving's Little by Little Matching campaign until this Friday, April 12!

Over 20 years ago...at 22 months “Tara” was among the first children to receive lifesaving treatment at a Nutrition Rehabilitation Home (NRH). Before 1998, malnutrition may have ended her life. Thankfully, timely support like yours helped restore Tara’s health and taught her mother how to keep their family well-nourished.

With continued help from people around the world, NYF has built 17 NRHs where more than 20,000 children like Tara have received a second chance. Malnutrition can be remarkably simple to address in Nepal with treatment and education using local foods. Just $350 (less than $1 a day) can save a child’s life in 3 weeks.

In 20 years, NYF has built 17 NRHs, successfully transitioning 15 of them to the Nepali government after 5 years of operations. Our first flagship Kathmandu NRH remains our permanent treatment, training, and monitoring center, and NRH-17 is in its 3rd year.

This past quarter, the two NRHs directly operated by NYF admitted 39 children, and 41 children were discharged with improved health (including a few children continuing from the previous month). NYF’s Kathmandu NRH took these lifesaving services and education “on the road” to remote villages, additionally reaching 796 children and 530 caregivers.

It is the generosity you share that makes it all possible. And if you make a gift by this Friday, it can be matched, helping NYF support even more desperately malnourished children in need. 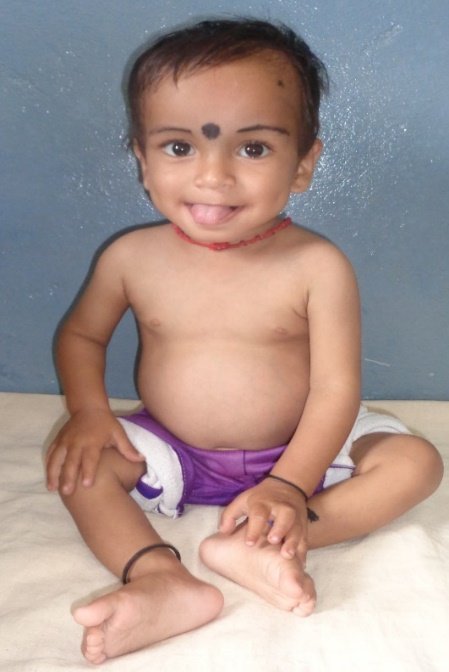 Your support is helping NYF solve a serious problem! Thank you. 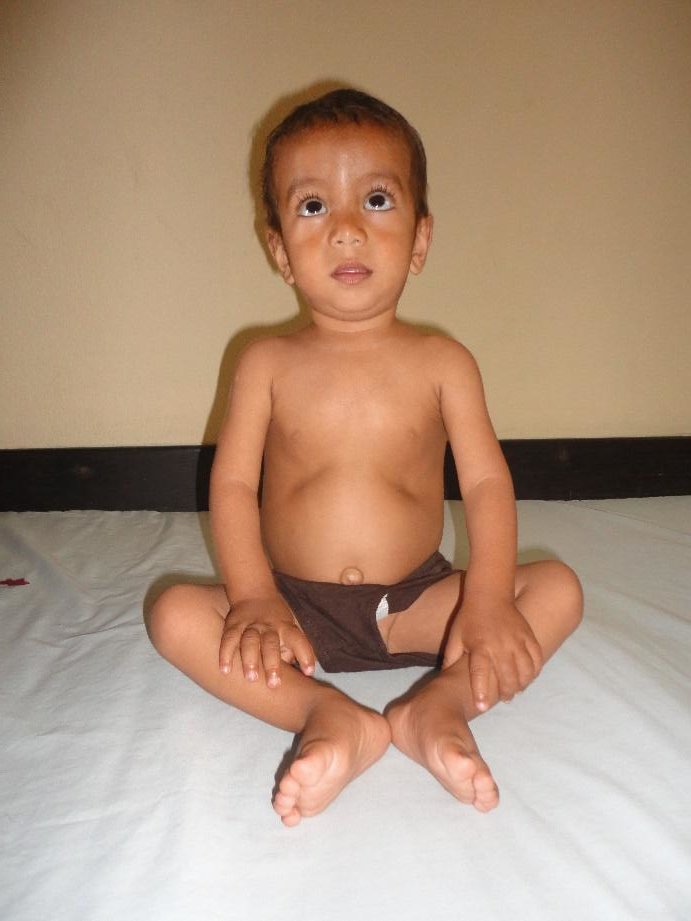 Seventeen-month old “Sanjowk” – skinny, pale, and undoubtedly ill – was rushed to the front of the health screening line at the August 22nd 2018 Nutrition Outreach Camp in Sindhupalchowk.   He weighed only 16 pounds and was 28 inches tall – the size of an average 9 month old baby in the US.

At the pediatrician checkup, little Sanjowk and his mother were referred to the closest Nutrition Rehabilitation Home (NRH) for free immediate treatment.

During the NRH intake process, he was diagnosed with severe Anemia (Iron Deficiency), and nutritionists learned that Sanjowk’s diet consisted of mostly rice with some lentils.

He was carefully fed a doctor-prescribed diet (local foods including milk, fruits, and green leafy vegetables). While he stayed longer than the average three weeks, in 54 days he reached normal weight.  He was no longer anemic and his mood and health completely transformed.

While malnutrition is a serious problem in Nepal, with your support, it can be easy to address and makes a tremendous difference. Thank you!

The Difference You Make 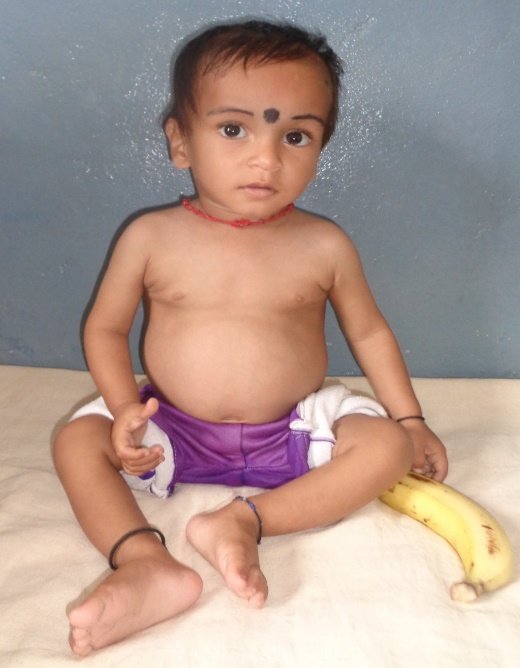 From the day he was born in a remote Nepali village, “Suresh’s” life was a struggle.

His desperately poor parents could barely manage to scrape together two skimpy meals for the family each day. Undernourished herself, his mother wasn’t able to breastfeed him, so baby Suresh was fed the same thin soups and rice as his parents and older brother.

At 15 months old, little Suresh weighed a scant 13 pounds… more like an average 7 month old baby in the US. He was miserably unhappy and inconsolable.

When he became dehydrated from severe diarrhea, his parents travelled by foot for four hours to the nearest hospital. After two days of treatment, he was discharged. Until 2017, he would have returned to the village malnourished and likely have continued to fall sick, or died. Now, however, children like Suresh come to NYF’s Nutritional Rehabilitation Home (NRH) -- which friends like you helped build -- for treatment of the underlying malnutrition.

Because his little body couldn’t tolerate high-calorie food, at first Suresh was fed small amounts every two to three hours. He required six weeks of treatment – twice the average – to restore his health.

In the meantime, with her beloved baby finally being nourished and restored to health, his mother “Sabita” was also eating healthy foods and studying the essentials of nutrition.

At only 22 years old, Sabita was already pregnant with her third child. She learned how crucial breastfeeding is for infants, the benefits of greens (typically not viewed as human food in Nepal, and instead fed to animals for those fortunate enough to have livestock), the healthiest plants she can grow in the family garden, and how to combine the basic vegetables, lentils and rice of their diet into balanced meals.

At discharge, Suresh was happy and healthy – going home with a mother who now had the empowering knowledge to provide her family healthy food at minimal cost.

While severe poverty is a factor, it’s the lack of knowledge that dooms so many Nepali children to a life stunted – or even ended – by malnourishment.

By supporting NYF’s Nutritional Program, your gifts are literally saving lives. Thank you! 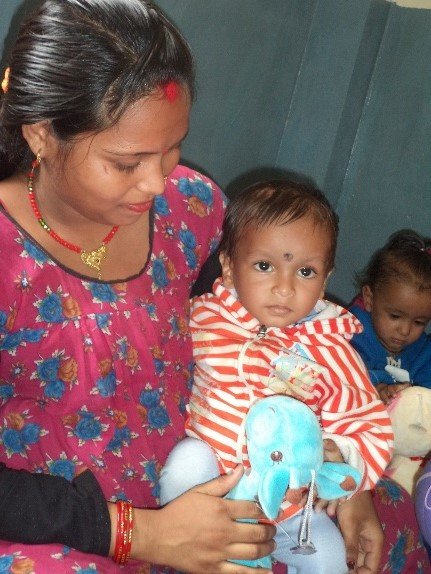 Suresh regaining his health - with his mother

Successful Handovers and More on the Road 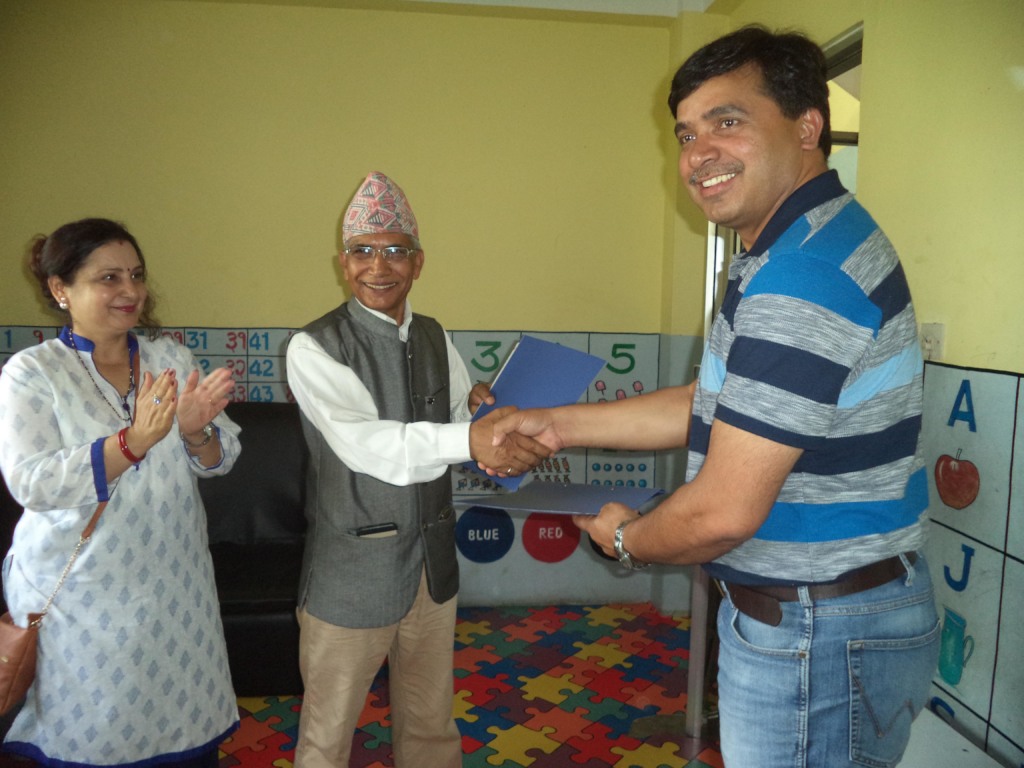 Five years ago, with support from friends like you, NYF embarked on a major commitment - building FOUR life-saving Nutrition Rehabilitation Homes (NRHs) to save malnourished children.

This month, we’re celebrating the success of that project - transitioning all four NRHs to the Nepali government.

Located in Dailekh, Dang, Butwal, and Baglung, these centers will now be fully operated and funded by the government, with ongoing monitoring and training from NYF’s team.

We’re proud of this model - building and establishing each NRH and then transferring the ongoing operations to the government over a five year period – because it’s sustainable and maximizes the impact of your generosity.

That generosity has helped NYF build 17 NRHs over the past 20 years –transforming the lives of thousands of children since 1998. Now, 15 of those NRHs have been fully transitioned and we’re in the second year of operating the new Dadeldhura center.

Our first, flagship NRH in Kathmandu remains the heart of this program, as NYF staff provide life-saving treatment, train nutrition professionals, and coordinate the Nutrition Outreach program – taking these critical services “on the road” to remote, isolated communities. 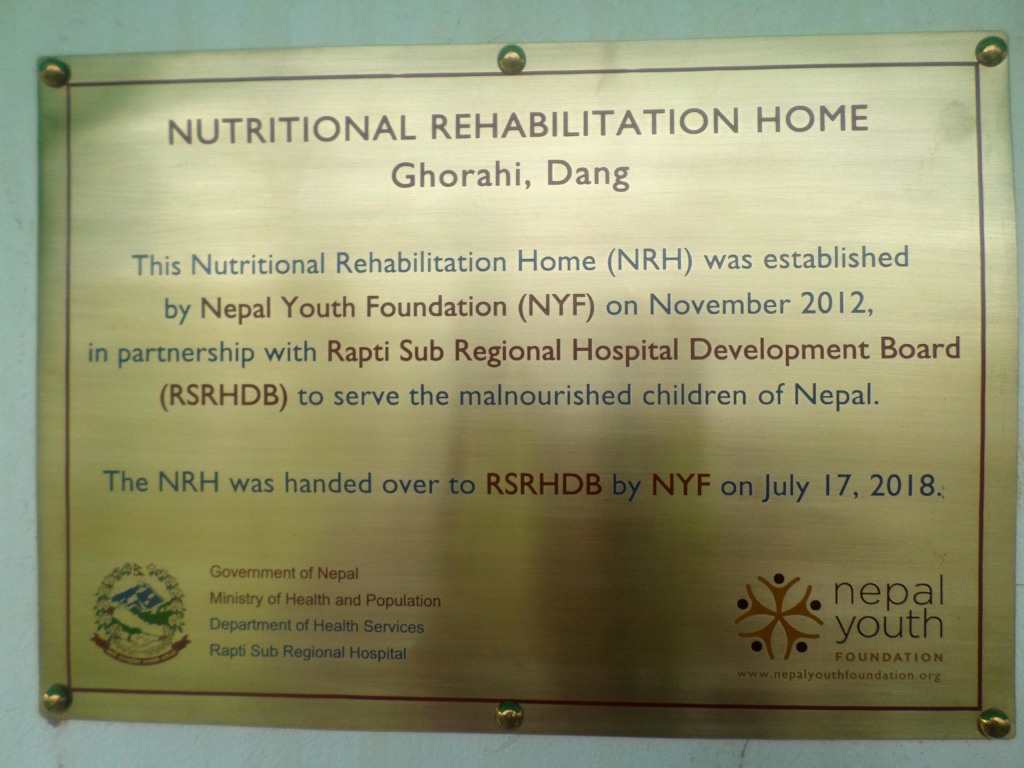 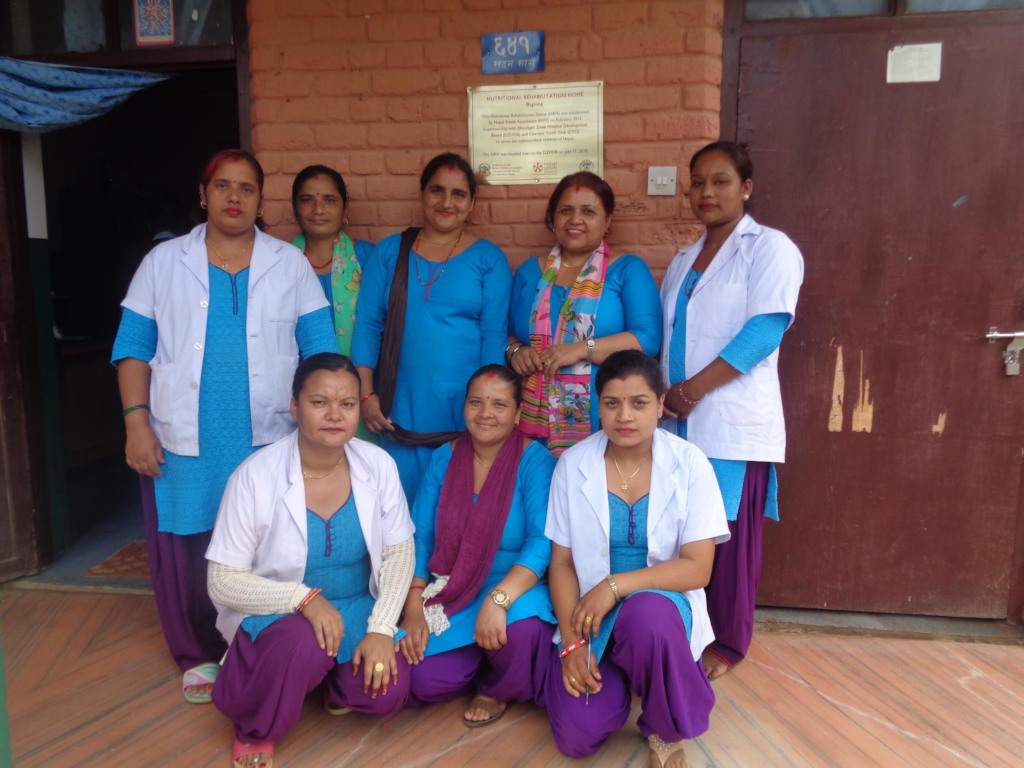 Babies like Pratik are healthy again - thanks to you 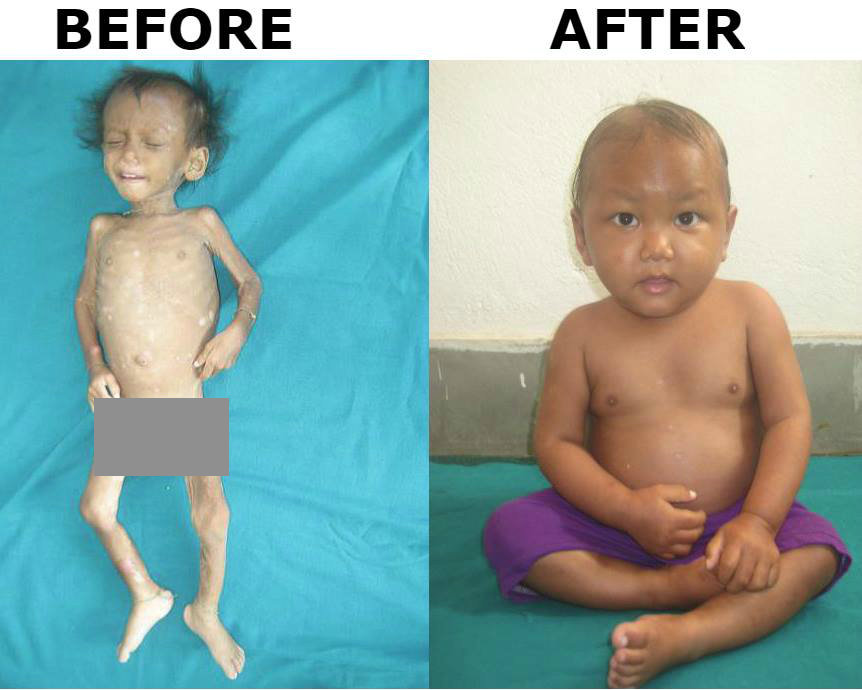 “Pratik”, a 22 month old boy from a family of 6, was brought to the Nutritional Rehabilitation Home (NRH) in Chitawan from a very remote village called Lothar.

His impoverished family ate only two meager meals each day with very little protein. Pratik was suffering from diarrhea and had no appetite. Frightened by his worsening condition, his parents took him to the hospital. A doctor there recognized the desperate situation and sent them to the NRH.

At admission, Pratik weighed only 12 pounds – 6 pounds below the normal weight for his 28” height. With protruding ribs, sparse hair, irritable mood, he was suffering.

Pratik could digest only milk for the first week of his stay. He was then fed healthy versions of the food his family could easily access or grow themselves, while his mother was educated on the importance of nutrition.

With nutritious food, proper medication and care, Pratik’s condition improved dramatically. While he stayed a little longer than the usual 21 to 28 days, in less than 6 weeks he gained over 5 pounds and transformed into a healthy and happy boy.

These life-saving interventions – at a cost of only $350 per child – are made possible by generous friends like you. We hope you feel proud of the difference your support makes. Thank you, and dhanyabad! 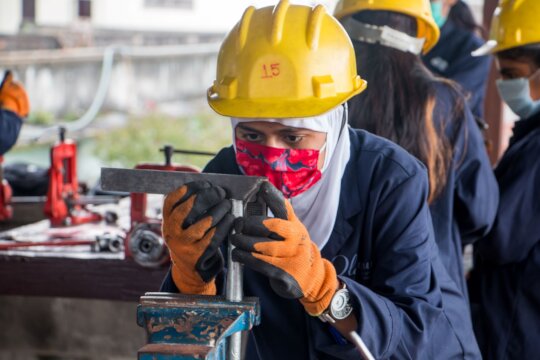