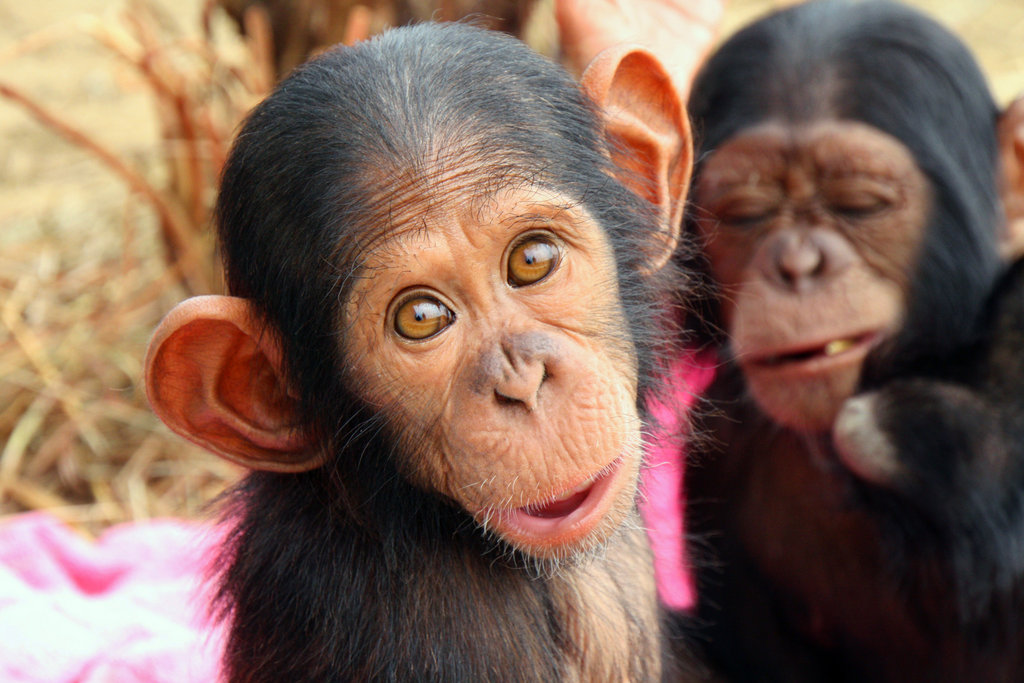 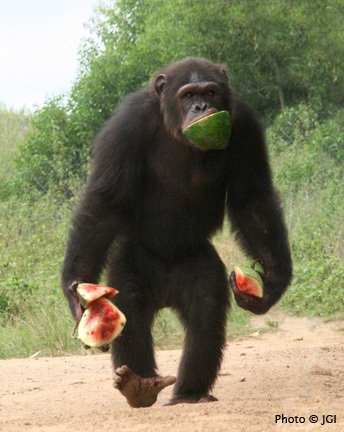 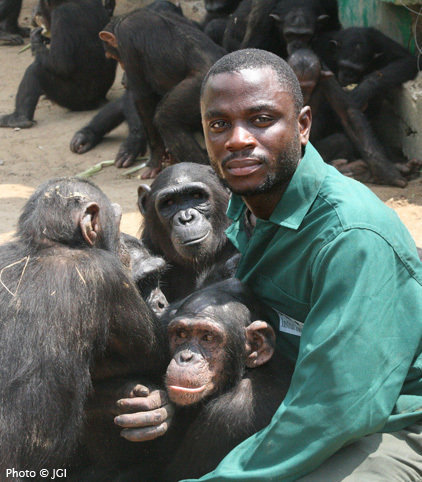 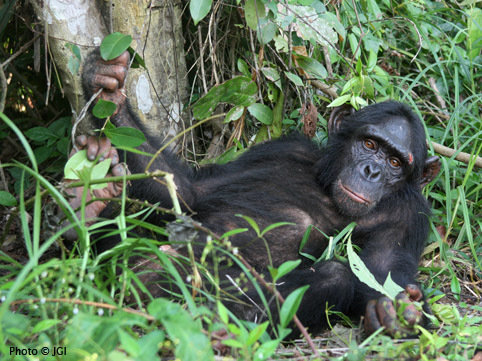 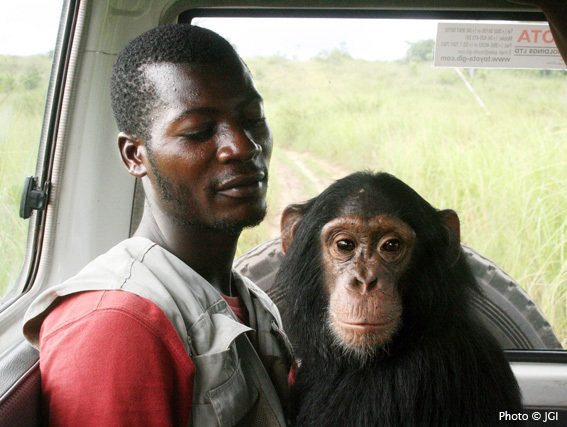 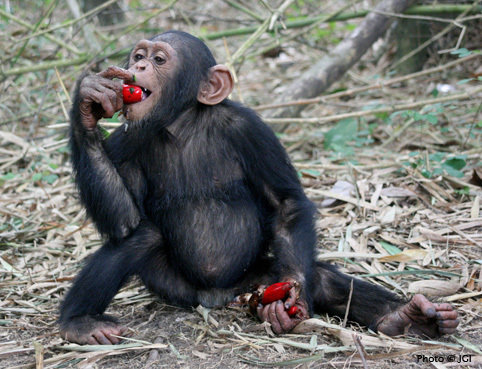 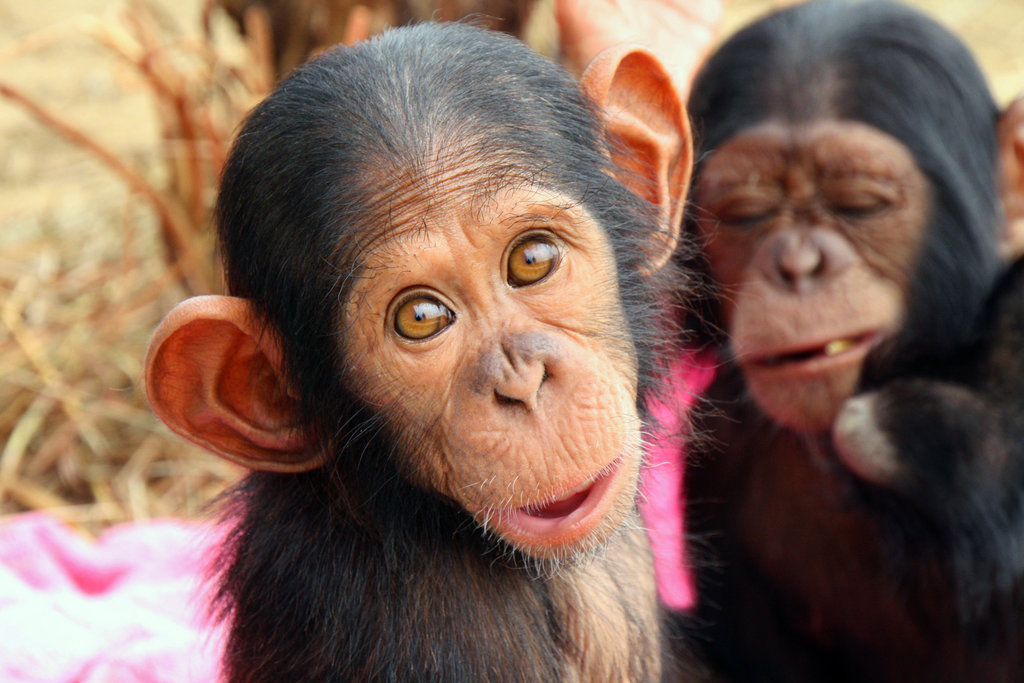 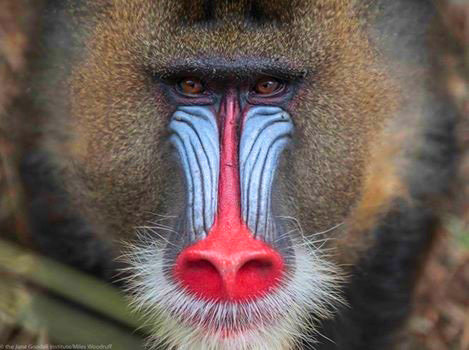 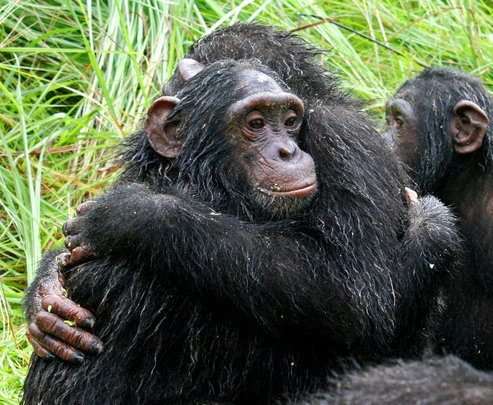 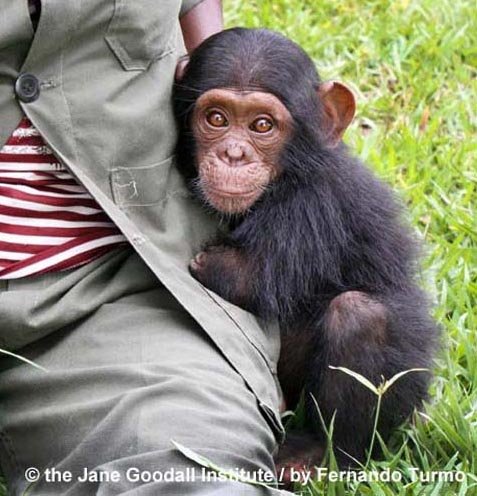 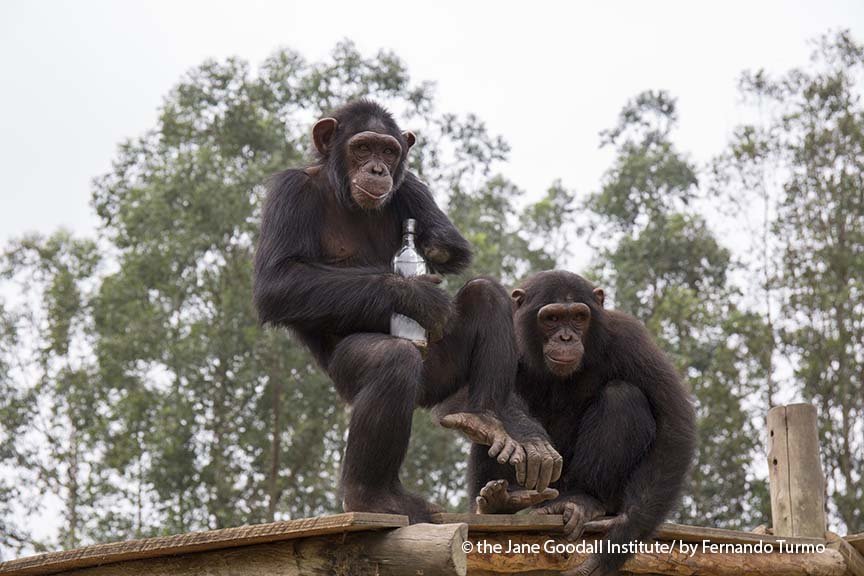 During the last few weeks, many of Anzac’s companions have been transferred to the island of Tchindzoulou. Mbebo and Mambou, her two best friends, were two of the chimpanzees who were transferred and integrated with other chimpanzees on the island to form part of a huge group of about fifty chimpanzees.

The aim of these transfers is to create a group of chimpanzees who could be potentially reintroduced into the jungle in the future. Now Anzac’s group at the original sanctuary site has only eight individuals, and is much calmer than before, with minimal fights or shouting. Anzac’s missing left arm and young age are part of the reason why she has still not been transferred to the islands.

At the moment, Anzac has to settle for the daily routine at the main sanctuary site of Tchimpounga. Although her personality remains affable with JGI caretakers, Anzac always tries to play tricks.

One favorite involves a bottle with peanuts that the caretakers use to attract the attention of the chimpanzees to take their temperatures. It's amazing how Anzac, despite missing a part of an arm, has the ability to reach behind the distracted caretakers and steal the bottle with the delicious peanuts. The caretaker tries to run after Anzac, but she is very fast and always manages to climb up one of the high wooden platforms. The caretaker asks her to return the bottle, but Anzac only laughs and eats the peanuts very quickly. Other chimpanzees come up begging to share the treasure, but Anzac eats them all. When the bottle is empty she plays with it for a while and then drops it to the ground from the top of the platform. While the caretaker catches her, she wonders how it is possible that this little chimpanzee can always steal the bottle; she is very smart! 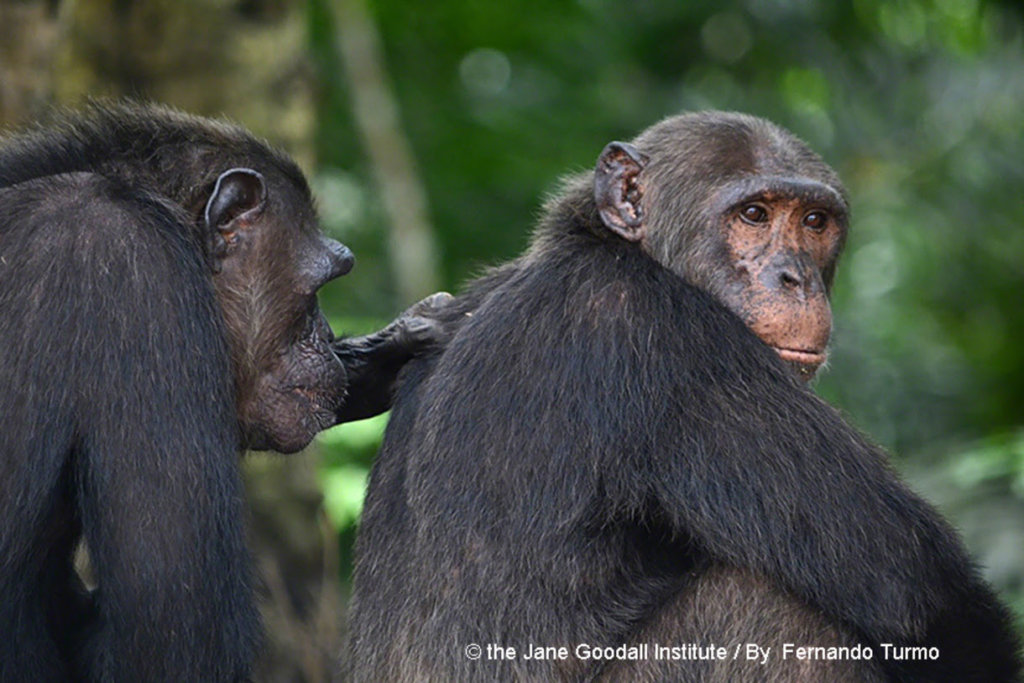 Lousingo getting groomed by a friend

Lousingo is a young male who arrived at Tchimpounga about eight years ago. When the caretakers opened the box he was transported in, they found a small chimpanzee dressed as a person, with trousers and a striped sweater.

Lousingo is a victim of poachers who killed his mother and then sold him as a pet to someone who dressed him like a human baby. Fortunately, Lousingo has recovered from the trauma of his early life and is enjoying life on the island of Tchibebé Island.

Lousingo has always been a bit reserved. He cried a lot when he was little, and his chimpanzee peers pushed him around. But now Lousingo is growing into a strong chimpanzee, and is capable of defending himself. Lousingo occasionally performs displays to show others that he is a strong male, but nobody cares. Everyone knows that Lousingo is still very young and that his displays of strength are just that and nothing more.

Lousingo’s group has a new alpha-male, Loufino. Until recently the alpha male was Kefan, but over the last few weeks Loufino and other chimpanzees united to dethrone Kefan in a revolt. Lousingo stayed on the sidelines and clearly did not want to participate. He was not sure which side to join and preferred to be neutral.

Now that Loufino is the boss, everything has returned to calm. Caretakers have  transferred Kefan to Ngombe Island to avoid any more serious aggression. 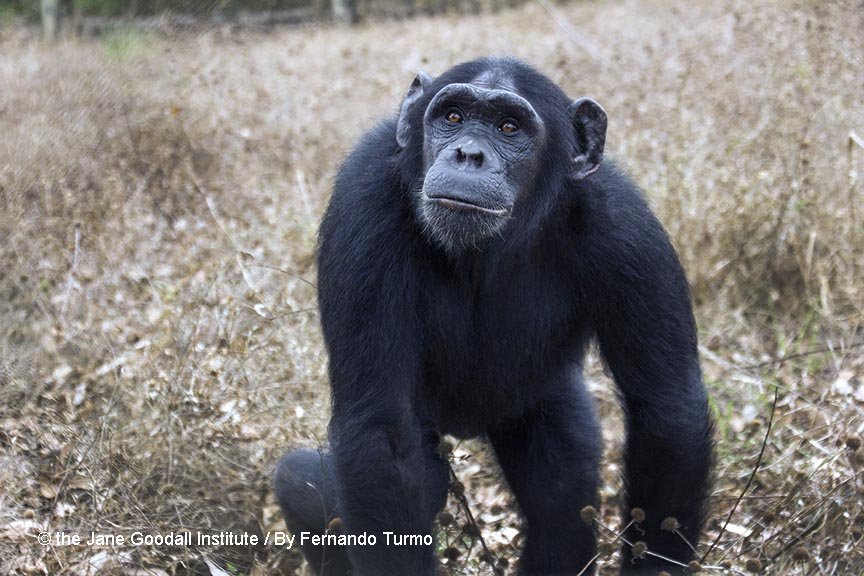 Mambou
In recent months, the caregivers of Tchimpounga have watched Mambou try to consolidate his position as the leader of Group Four.

Mambou may not be the strongest male group, but his personality is that of a leader’s. JGI’s team is confident that in a few years Mambou will become a dominant alpha male.

As with children, one can get a sense of a future adult chimpanzees’ personality by observing that chimpanzees personality as a youngster. Some are submissive, some dominant, some are gregarious, some are misunderstood, and others, like Mambou, are leaders.

Gradually Mambou and other chimps are getting a group together to support him in his future leadership bid. Antonio and Sam have now joined the clan. They are all forming a select group of males who will dominate the group within a few years. Now it seems like a game, but gradually everything will be taken much more seriously.

A group of chimpanzees requires that the hierarchy is well organized, as it is in human society. A successful group needs a leader who is bright, intelligent and knows how to  make the right decisions in difficult or dangerous situations. Mambou seems to possess these leadership qualities.

At the moment Mambou is content to stroll through his group’s enclosure with slightly bristled hair, performing regular displays and reminding other chimpanzees with a kick or shove who the leader is! 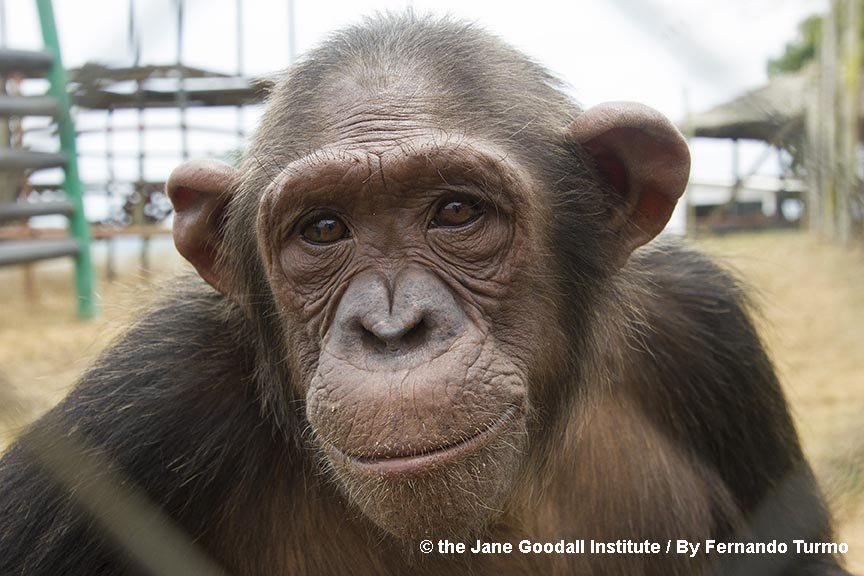 Lemba is healthy and growing. Years ago, her legs were paralyzed by polio, but she has learned to move around with great skill and amazing speed.

Recently, the caregivers at Tchimpounga had to make the difficult decision to stop bringing several of the youngest chimpanzees to visit Lemba and La Vielle’s enclosure. It has become too difficult to walk these rambunctious youngsters from their enclosure to Lemba’s enclosure. The last few times they attempted this, two of the young chimpanzees got away from the caregivers and climbed to the ceiling of the bedrooms. The caregivers had to chase the two of them for hours before they managed to get them back out into the enclosure with the other chimpanzees. They are growing up and entering that age where they are mischievous, and interested primarily in their own agenda.

Lemba now spends her days in the company of La Vielle,  an older chimpanzee with whom she has developed a good relationship. They do not have conflicts and they both spend a lot of time grooming and cleaning each other’s hair. A few days ago, an interesting thing happened to Lemba.

A new chimpanzee named Falero who came to Tchimpounga recently ended his quarantine period. Dr. Rebeca A., the director of Tchimpounga, decided to introduce Falero to Lounama, a chimpanzee with a heart condition at Tchimpounga who must be isolated from other chimpanzees while she is on a special diet and strict monitoring.

Lounama’s enclosure is next to Lemba’s, and the whole time while caregivers were introducing Falero and Lounama, Lemba watched every detail through the fence. She was so excited that she started screaming uncontrollably. She was so happy to have a new neighbor.

Falero, a quiet and sweet natured chimpanzee, was a little unsure of Lounama at first, but he was quickly reassured by Lounama giving him gentle strokes and grooming. Soon Lemba also started to relax. La Vielle was also watching with interest. These four chimpanzees, Lounama, La Vielle, Falero and Lemba are in these special enclosures for different reasons, but are now neighbors and a little group of their own. 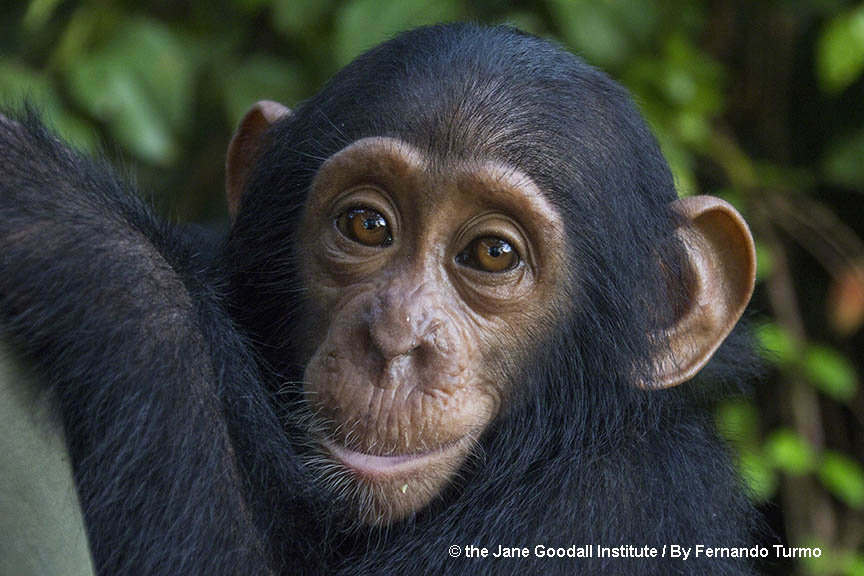 Recently, Tchimpounga's director, Dr. Rebeca Atencia, received a call about a baby chimpanzee that was being kept illegally as a pet. The chimpanzee's "owner" was arrested, and the chimp was brought to the Brazzaville Zoo before being transferred to Tchimpounga.

The little chimp, named Falero, was weak and depressed but luckily had no serious health issues or injuries. He will remain in quarantine for three months to protect his health and the health of his future chimpanzee group-mates. In the meantime, Falero is enjoying time with his adoptive "mother" Chantal, one of Tchimpounga's most experienced caregivers.

Falero has so far shown himself to be a very sweet and gentle chimpanzee who loves to play. Though he still suffers from poor sleep and nightmares, he is doing better every night, snuggled up to Chantal for comfort. Soon he will be introduced to a group of young chimpanzees like him, who were taken from their their mothers much too soon.

It is very important for Falero and all chimpanzees at Tchimpounga to develop relationships with other chimpanzees as well as their caregivers.

Find another project in Congo, Republic of the or in Animal Welfare that needs your help.
Find a Project

GlobalGiving
Guarantee
Donate https://www.globalgiving.org/dy/cart/view/gg.html?cmd=addItem&projid=2500&rf=microdata&frequency=ONCE&amount=25
Please Note
WARNING: Javascript is currently disabled or is not available in your browser. GlobalGiving makes extensive use of Javascript and will not function properly with Javascript disabled. Please enable Javascript and refresh this page.