Equip Cambodians with Tech to Protect Their Forest 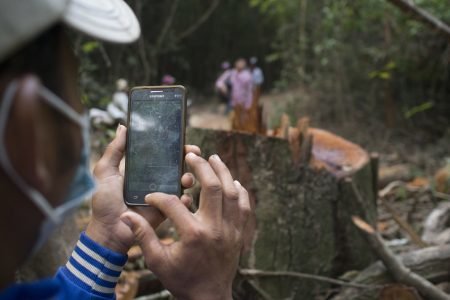 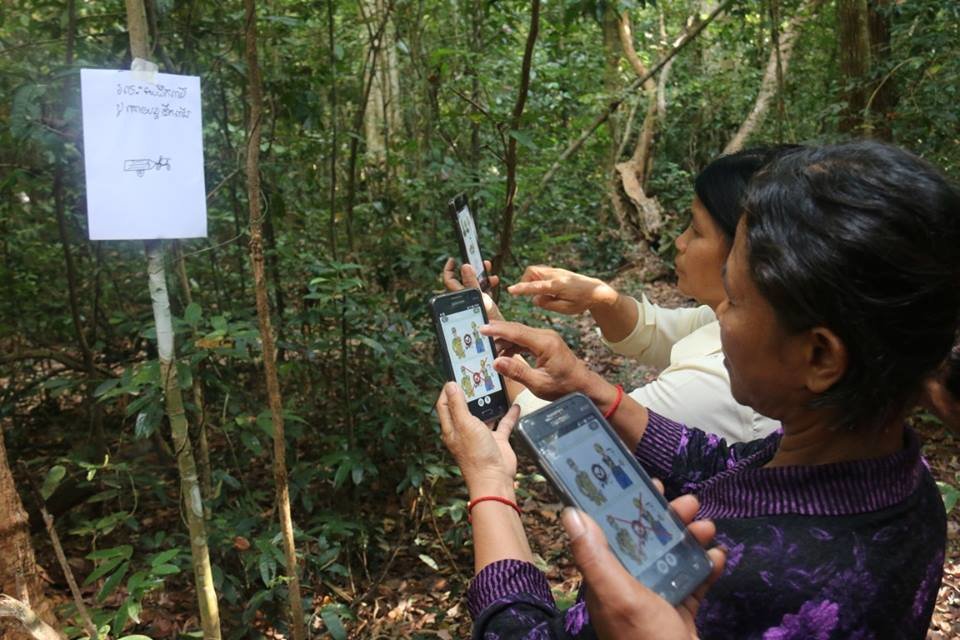 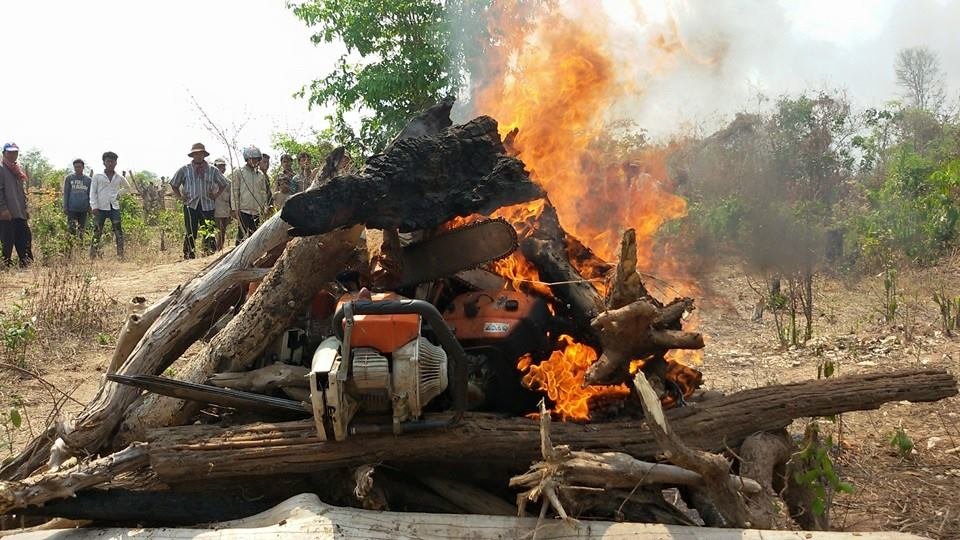 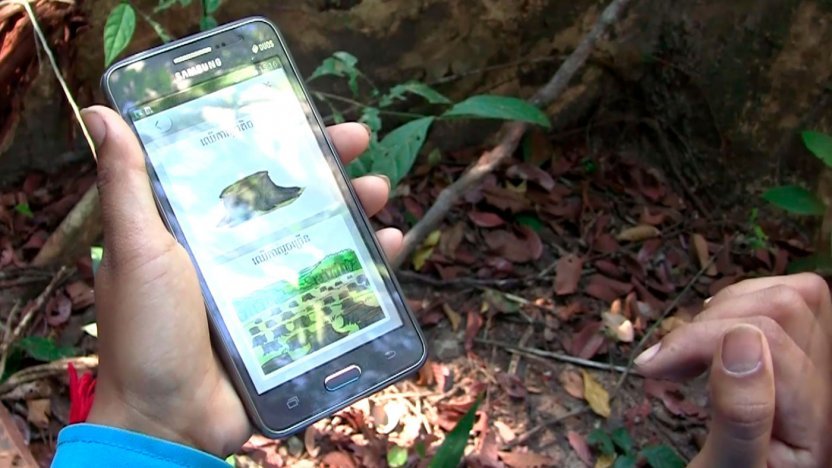 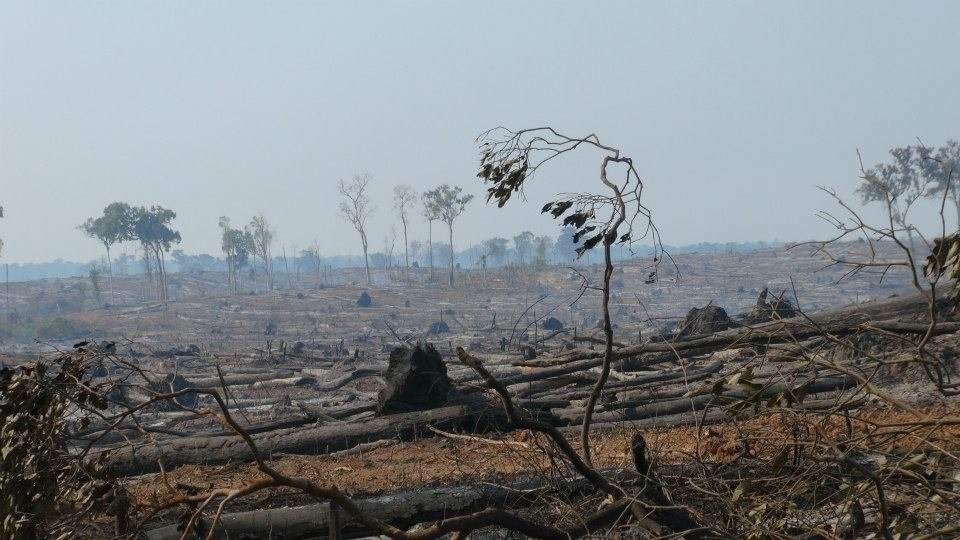 Banned from Entering Prey Lang, They Won't Give Up

PLCN continue to patrol the perimeter of Prey Lang

It continues to be difficult to patrol and protect the Prey Lang forest. Members of the network are not allowed to patrol inside the forest, so they have taken to patrolling the perimeter. In these patrols, the PLCN continues to document instances of illegal logging. Most often they find people transporting timber from the forest by boat and tractor.

Equipped with smartphones, the PLCN is able to document these cases and show the evidence to authorities and the public. Without this tool, they would be unable to prove that illegal logging continues unabated.

The PLCN is grateful to its supporters and will continue to do all they can to protect Prey Lang.

(All photos taken by members of the PLCN)

Logs found near the edge of Prey Lang.

On patrol near Prey Lang.

By Peace Bridges on behalf of PLCN - Project Manager 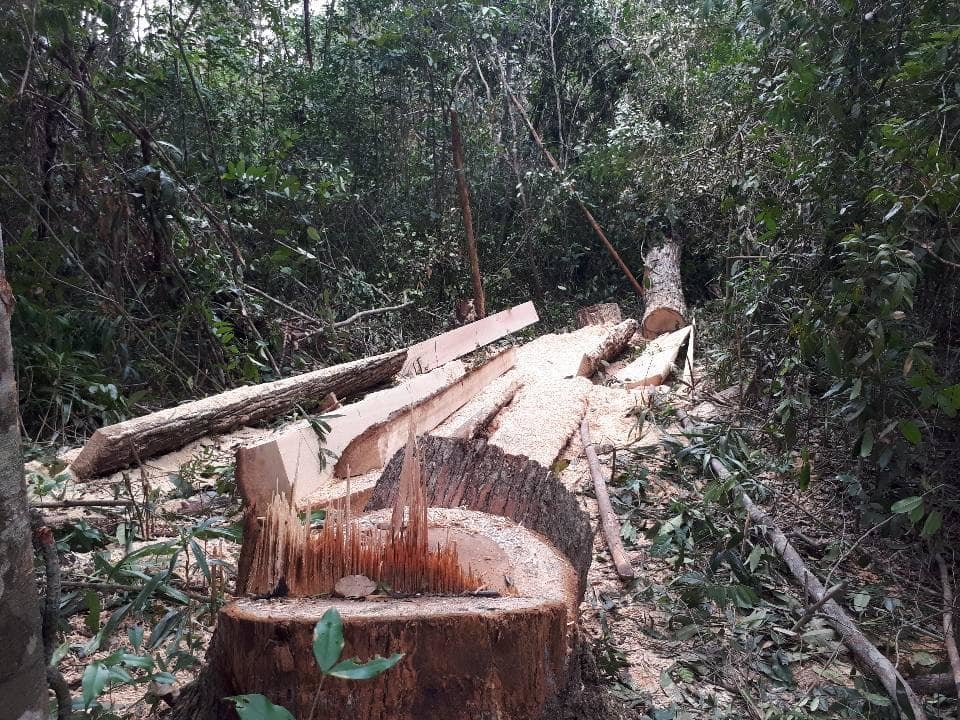 During the past months, members of the Prey Lang Community Network have continued to document evidence of widespread illegal logging in the Prey Lang forest. Day and night, they see people transporting timber out of the forest, even being so bold as to travel by the homes of PLCN members. Additionally, PLCN members have documented many new logging operations inside and surrounding Prey Lang.

The Prey Lang Community Network is deeply concerned that the deforestation will continue without more cooperation and action by all relevant authorities.

For now, the PLCN will continue to do what it can to document all illegal activities, evidence of climate change, and the forest’s biodiversity. They will continue to advocate for the protection of the forest. If you wish to see more photos from their forest patrol, check out the PLCN Facebook page.

Several new mini documentaries about deforestation in Cambodia are out and available here and here. 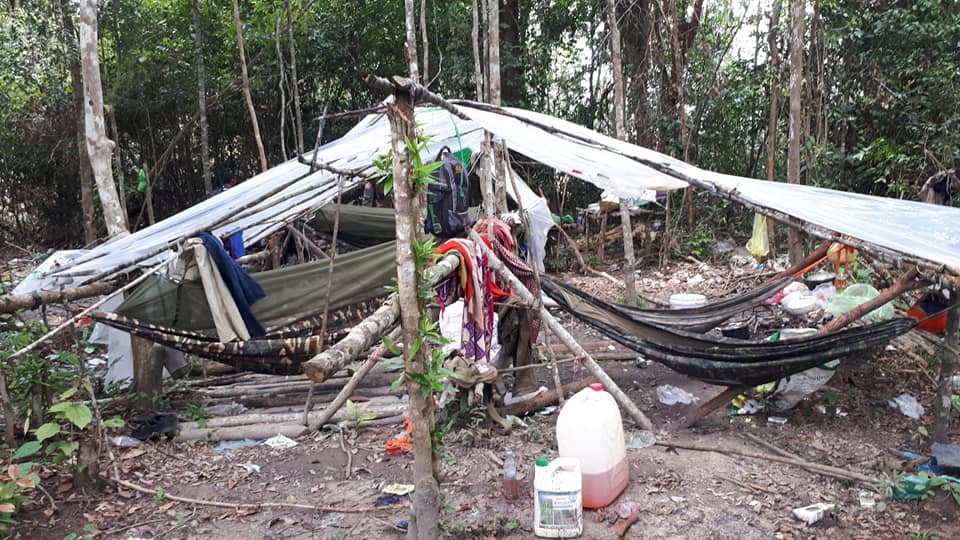 While on patrol, PLCN members camp in the forest.

By Peace Bridges on Behalf of PLCN - Project Coordinator 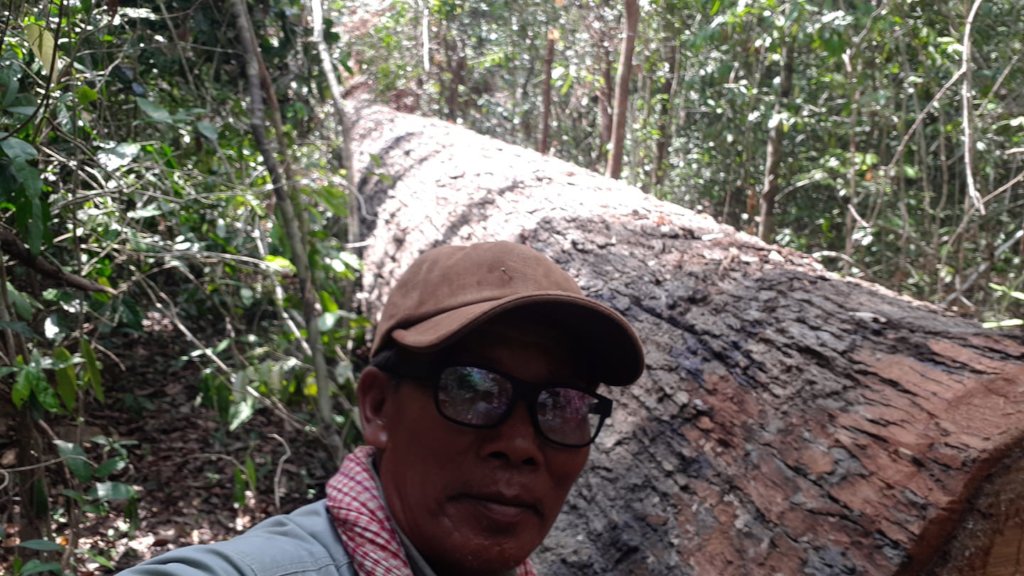 A PLCN member poses with a tree he found on patrol

COVID-19 has caused many people around the world to cease their normal activities. Illegal loggers, however, have not stopped encroaching on the Prey Lang forest.

Currently, the members of the Prey Lang Community Network (PLCN) are dealing with the economic fallout of the pandemic as well as trying to stop the ongoing deforestation. In recent months, the PLCN and Global Forest Watch have reported an increase in logging near the north, south, and eastern parts of Prey Lang. Although they are currently blocked from going on major patrols, they have managed to do small patrols and take photos of the illegal logging. They have documented many tractors taking logs from the forest and through their communities.

These are uncertain times, especially for communities who bear the brunt of environmental deforestation. Nevertheless, they are committed and continue to do what they can to protect Prey Lang.

The PLCN thank you for your continued support of their advocacy and forest protection. Stay healthy and well.

By Peace Bridges Organization, On behalf of PLCN - Project Manager 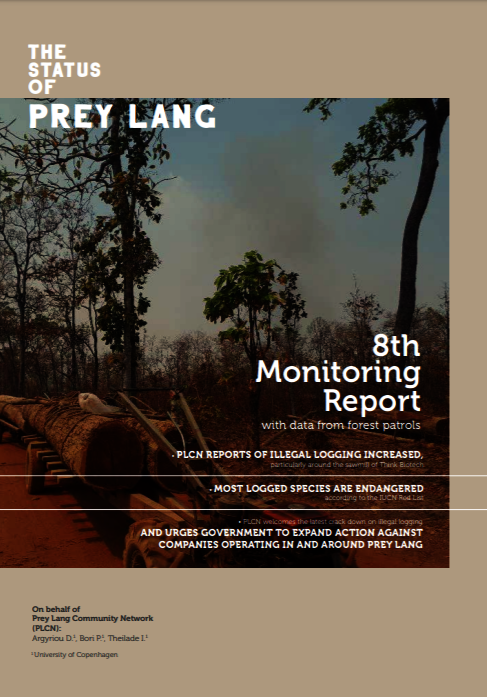 Check out the latest report on Prey Lang

Since 2001, communities living in the Prey Lang forest area began to advocate to stop illegal logging and land grabbing. Nearly two decades later, the Prey Lang Community Network (PLCN) continues to patrol and advocate for the protection of Prey Lang.

Equipped with smartphones and the Prey Lang App, they patrol and gather data on illegal activities, natural resources, and climate change. The University of Copenhagen compiles and analyzes the data with satellite imagery and produces regular reports, the latest being The 8th Monitoring Report on the Status of Prey Lang.

The key findings include:

Behind the Scenes: The Prey Lang App 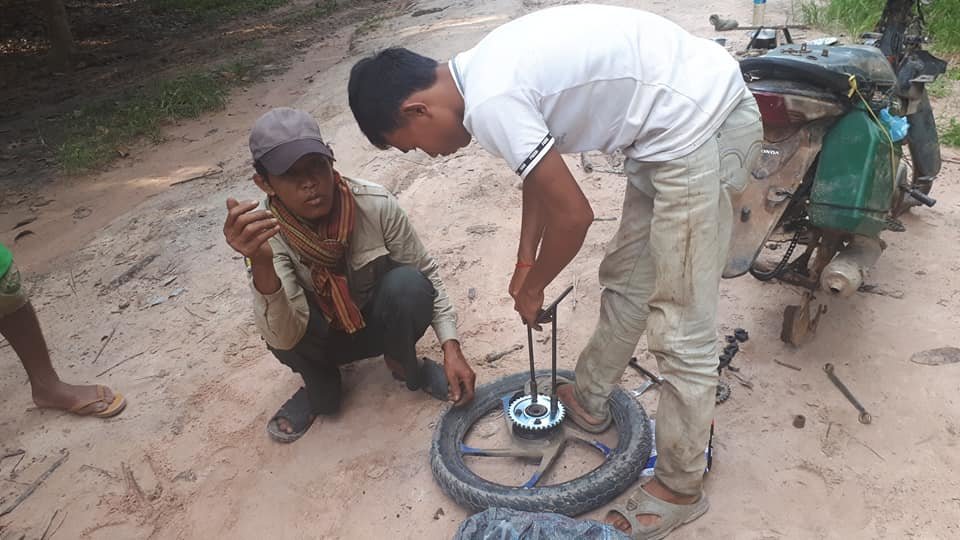 Stopping to fix a motorbike tire while on patrol.

On behalf of the PLCN, thank you for donating to support their efforts to protect Prey Lang. When they receive sufficient funds, they will purchase and train more members to collect data in Prey Lang as some of the members are already doing.

When the PLCN goes on patrols, they carry smartphones and GPS devices to document what they find.

Their app has several categories that they use to collect data in the forest. These include:

The data collected by PLCN is uploaded to a cloud and analyzed by a team of researchers at the University of Copenhagen. Check the bottom of this report for a link to their latest report.

The following accounts of forest patrols were written by PLCN Huoen Sopheap, a member who has been documenting forest crimes for many years now:

“We went on a patrol from 17-19 October 2019. We didn’t hear any sounds of chainsaws this time. But we saw many trees had fallen down. We cooperated with the Sandan district police to confiscate one knife and chainsaw, which we turned over to the district forest rangers to dispose of according to the law.”

"On the 24-26th of September 2019, members of the PLCN went on a 3-night patrol with forest rangers. According to one member of the PLCN, they found two chainsaws near Ou Anlong Veng and Ou Chanou. They found many planks of cheuteal (Dipterocarpus alatus) and choah (resin) trees that illegal loggers had transported out of Prey Lang and stashed on the CRCK rubber plantation land. The patrol team confiscated the timber and gave it to the district officials."

“This is a real problem for the forest. Those of us who protect it are few but those who destroy it are many. I hope that we can continue in our efforts.” 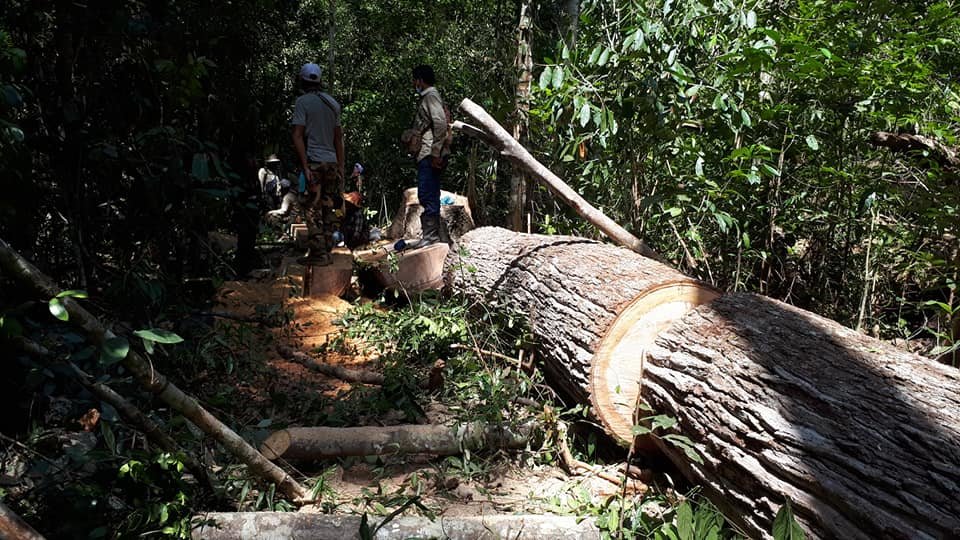 A cut tree photographed by the PLCN in Prey Lang.

Project Leader:
Audrey Thill
Phnom Penh, Cambodia
$3,559 raised of $10,000 goal
You last donated to this project on
68 donations
$6,441 to go
* Amounts in US Dollars
Donate Now
Donate once
Donate monthly
$30
USD
Will train 1 person to use social media to advocate for their forest
›
$50
USD
Will provide food and lodging for 1 person during the smartphone training
›
$75
USD
Will train 1 person to use a smartphone for documenting forest crimes
›
$250
USD
Purchase 1 smartphone
›

Donating through GlobalGiving is safe, secure, and easy with many payment options to choose from. View other ways to donate
Peace Bridges Organization has earned this recognition on GlobalGiving:

GlobalGiving
Guarantee
Donate https://www.globalgiving.org/dy/cart/view/gg.html?cmd=addItem&projid=41380&rf=microdata&frequency=ONCE&amount=25
Please Note
WARNING: Javascript is currently disabled or is not available in your browser. GlobalGiving makes extensive use of Javascript and will not function properly with Javascript disabled. Please enable Javascript and refresh this page.