Emergency Response to Explosion in Lebanon 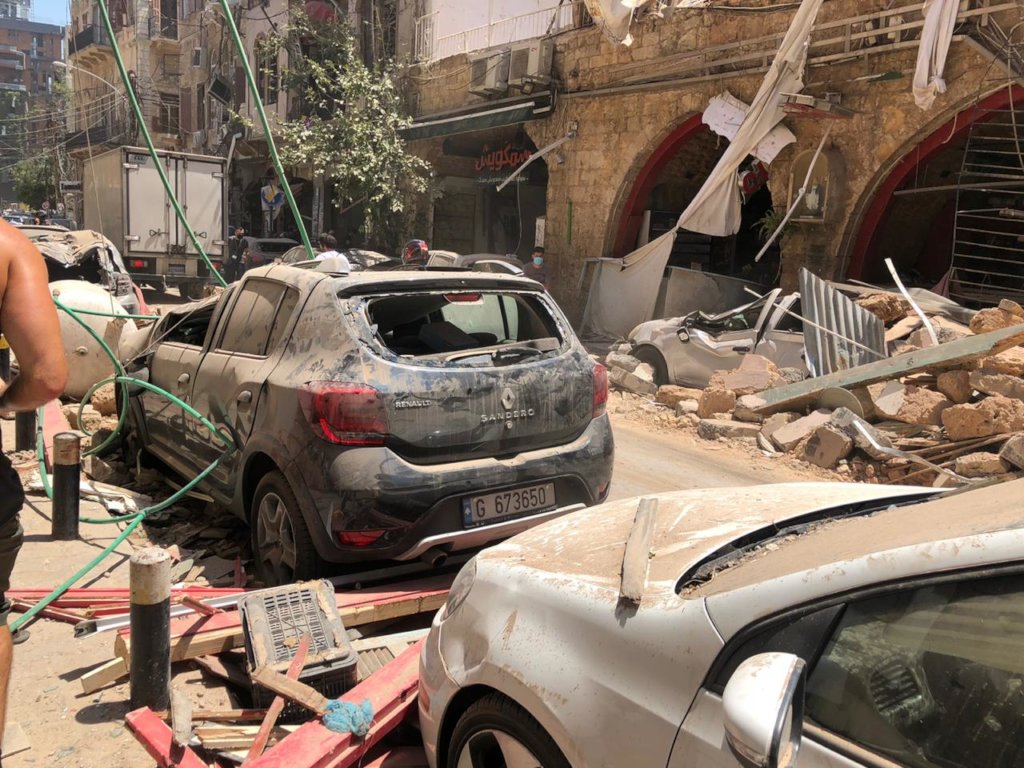 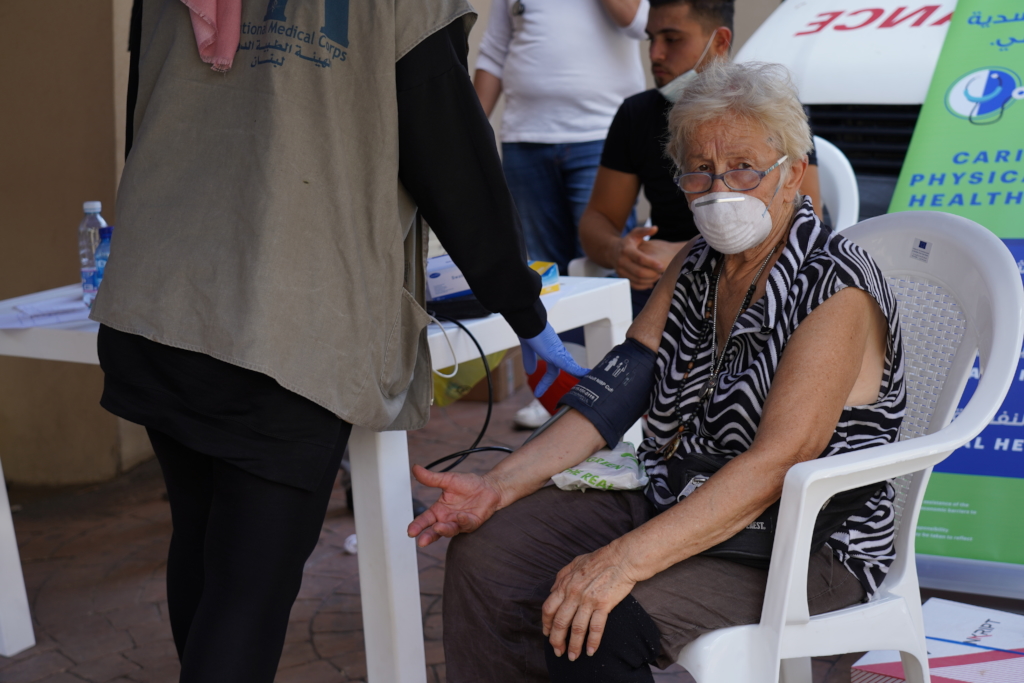 A patient seeing our team for healthcare

This will be our final update as International Medical Corps’ emergency response to the Beirut, Lebanon explosion has drawn to a close.

To continue supporting International Medical Corps, please visit our “Addressing Humanitarian Needs in Lebanon” project to learn about our response.

Over one year ago, on August 4, 2020, a massive explosion ripped through Beirut, Lebanon—so powerful that it registered as a 3.5 magnitude earthquake. International Medical Corps’ team based in Lebanon mobilized quickly in the aftermath of the blast reaching more than 54,300 women, men and children in the first two weeks with personal protective equipment (PPE), psychological first aid, hygiene kits and more.

“I’ve lived in the city for the past 10 years. This is my first emergency that I am responding to as a resident,” says Rima, International Medical Corps’ Communications Manager in Lebanon.  “Thankfully, my family and I were all okay; however, thousands of other were not,” explained Rima.

With more than one-third of health facilities damaged, those that remained open were overwhelmed by patients affected by the blast and COVID-19. Medical storage facilities sustained damage, causing shortages of vital medicines and supplies. Our team provided more than 500,000 health consultations, supported 87 health facilities with medical supplies and PPE, rehabilitated three primary healthcare centers and more.

Mental health services helped people like Aurore. “We could not find my mom at first; then we found her under the couch, speechless and unable to move. My mother was not only in physical pain, but also emotional pain because of what happened,” recounts Aurore. International Medical Corps provided mental health and psychosocial support for both Aurore and her mother, and thousands of others impacted by the Beirut blast.

Although International Medical Corps’ response to the Beirut explosion has ended, our team continues to address humanitarian needs throughout Lebanon.

International Medical Corps thanks the GlobalGiving community of donors for supporting our relief and recovery efforts following the devastating Beirut blast. 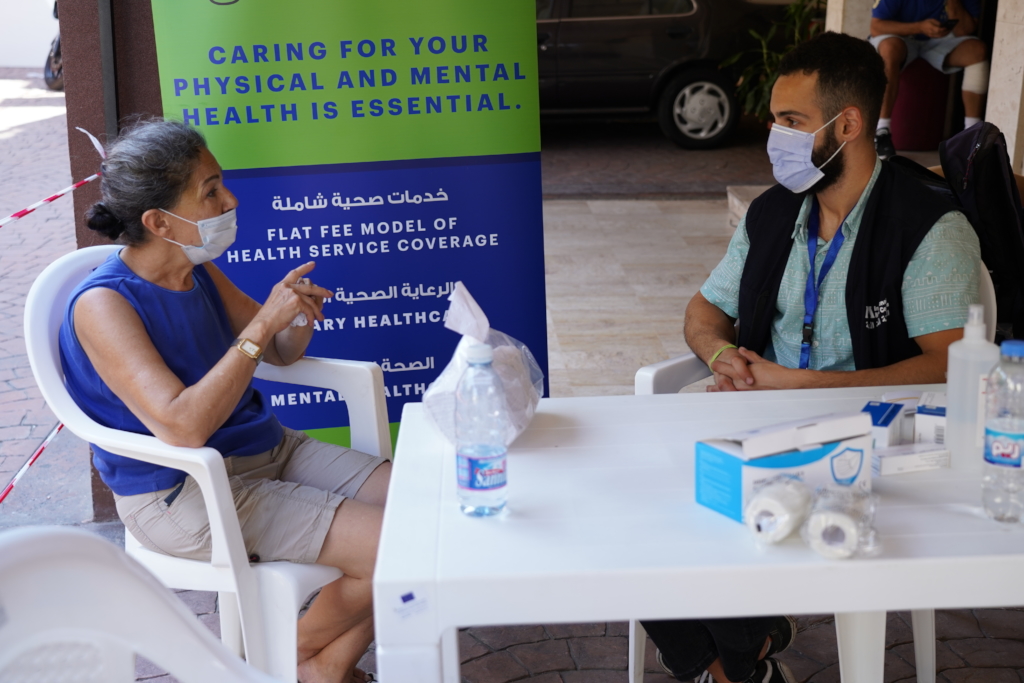 One Year After the Blast 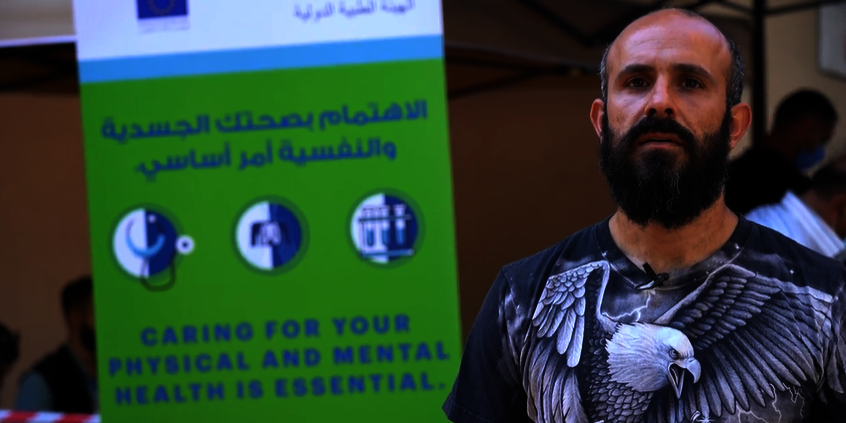 Sarkis could not believe the destruction

It has been nearly a year since large amounts of ammonium nitrate stored in the port city of Beirut exploded on August 4, 2020. According to Sarkis, who was driving to his house when the explosion occurred, “It was horrific, nothing I have ever seen in my life before. We only see such devastation in the movies – however, we just experienced it in Lebanon.”

After the blast, which displaced more than 300,000 people, injured 6,500 and left at least 220 people dead, International Medical Corps immediately launched an emergency response to meet the needs of those affected, reaching more than 54,300 men, women and children in the first two weeks.

The explosion greatly impacted Beirut’s health infrastructure, destroying three major hospitals, and damaging numerous primary healthcare centers (PHCCs), dispensaries, private clinics, pharmacies and standalone laboratories. Altogether, the blast resulted in the loss of 500 hospital beds and impacted approximately 36% of health facilities. The need for care rapidly increased with the injuries, displacement and COVID-19 pandemic, overwhelming healthcare facilities. For example, COVID-19 cases rose from 5,000 prior to the explosion to more than 115,000 within three months.

In response, International Medical Corps’ team in Lebanon has provided more than 525,000 health consultations and distributed more than 4.6 million pieces of personal protective equipment and infection prevention and control supplies, such as masks, gloves, bandages and sanitizer. We also rehabilitated three PHCCs: Karaguezian PHCC, Voix de la Femme and Al Zahraa PHCC. These health facilities are now fully functional and offering much-needed healthcare services to members of the most vulnerable communities in Lebanon.

Additionally, the blast significantly affected the livelihoods of many people with disabilities; many lost their jobs and reliable access to healthcare as a result of the explosion. Our team provided more than 16,000 assistive devices such as hearing aids, visual aids, eyeglasses, mobility devices and more. We have also provided over 7,000 rehabilitation services in the form of physiotherapy, occupational therapy, and speech therapy to help those disabled.

Thanks to the support of the GlobalGiving community and other donors, we have been able to reach more than 276,000 people affected by the Beirut blast. Our team continues to serve vulnerable communities in Beirut and across Lebanon. 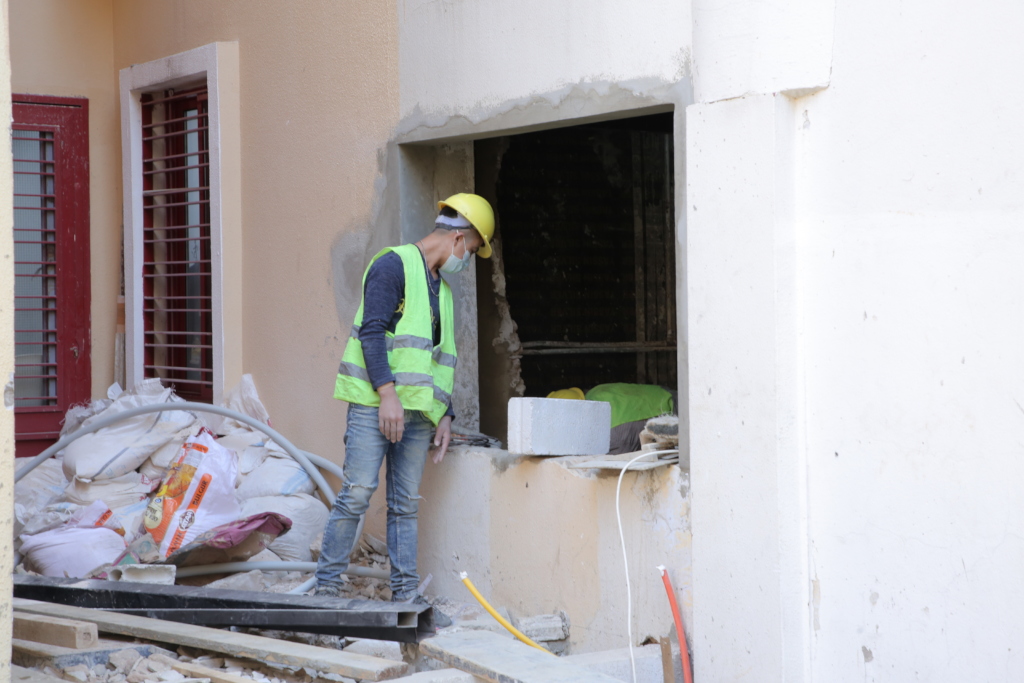 Update: Recovering from the Beirut Explosion 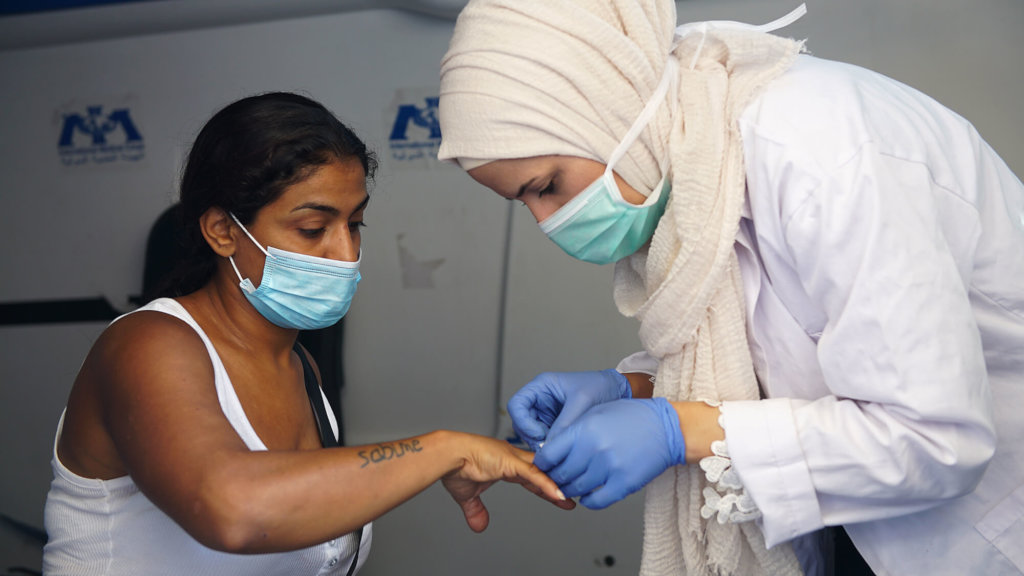 Seven months after the Beirut port explosion, Lebanon continues to recover from the massive blast that left at least 220 dead, 6,500 injured and 300,000 displaced from their homes. Even under normal circumstances, the blast would have been incredibly difficult to recover from, but Lebanon is currently struggling through numerous concurrent crises including an economic downfall and refugee crisis.

As a result of these compounding crises and the blast, many Lebanese face psychological distress and mental health conditions due to continued and overwhelming chaos and uncertainty, as well as the enormity of their loss that often includes homes, community, loved ones and livelihoods.

One survivor of the Beirut blast, Joana, recently said, “I lost my life on August 4. I lost my house, I lost my memory, I lost two friends,” referring to neighbors killed in the explosion. “I lost my mental health, and so I lost everything.”

The road to recovery for Lebanon and for survivors like Joana will not be a short one. To address the growing concern about the mental health impacts of the explosion and crises on the population, our team has provided more than 2,000 psychological first-aid (PFA) sessions through mobile medical units (MMUs) that were deployed to affected neighborhoods.

Further complicating the response, COVID-19 pandemic continues to be a major concern — before the blast, Lebanon had some 5,000 confirmed cases of COVID-19, with that number rising to more than 441,041 as of March 22.

A community volunteer helping clean the destruction from the blast described how the pandemic effected those on the front lines, “As we clear through the rubble and continue to clean our devastated neighborhoods, we are worried about being in contact with so many people in a crowded area because of COVID-19.”

Through our response, we provided community volunteers with needed PPE to protect themselves and help slow the spread of the virus. The community volunteer continued, “I live with my parents, and they are elderly, so knowing that I am protected while I do my civic duty puts me at ease. I don’t want to bring the virus home and infect my parents or loved ones. We are thankful that you are here distributing this equipment to help protect the volunteers on the ground.”

By the start of 2021, International Medical Corps reached more than 145,000 people affected by the blast, distributing over 3 million pieces of PPE, including masks, gloves and gowns – and medical supplies to 27 healthcare facilities. Moving forward we will continue to provide needed services to those impacted by the blast, including health, mental health and gender-based violence prevention and response activities.

Thanks to the support from the GlobalGiving community, our teams can continue to work to address the most critical needs of those affected by this catastrophe. 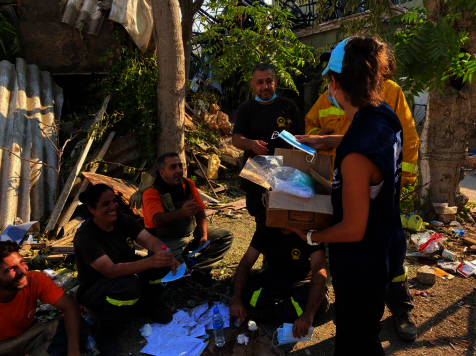 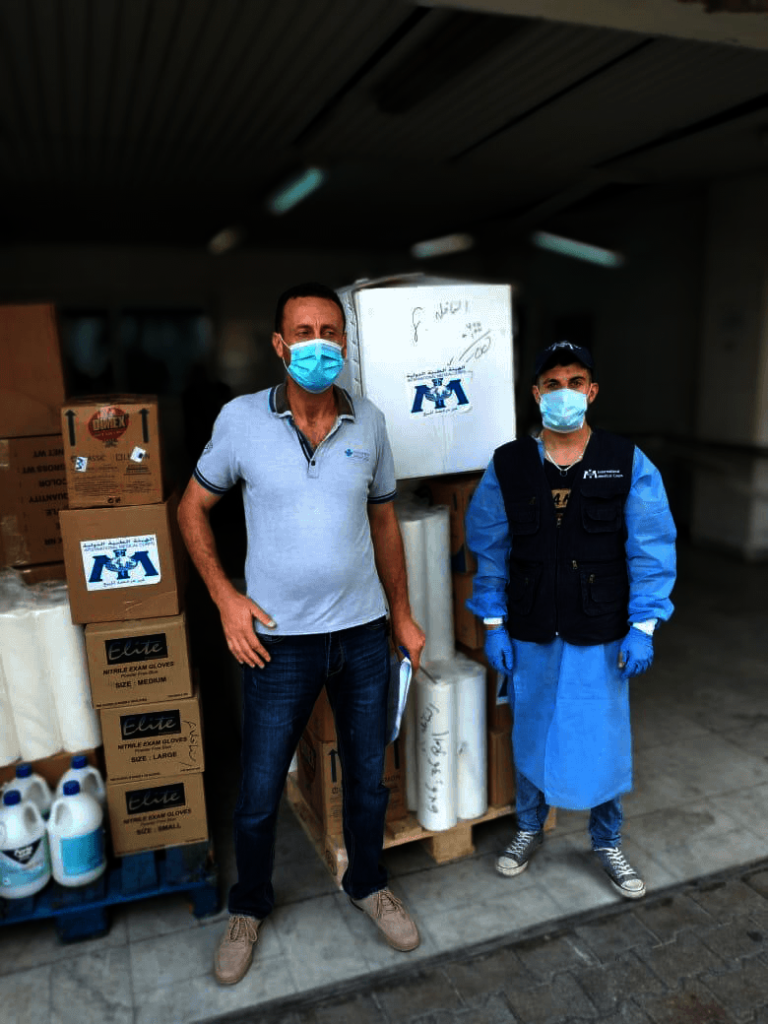 Responding to the Catastrophic Explosion in Lebanon 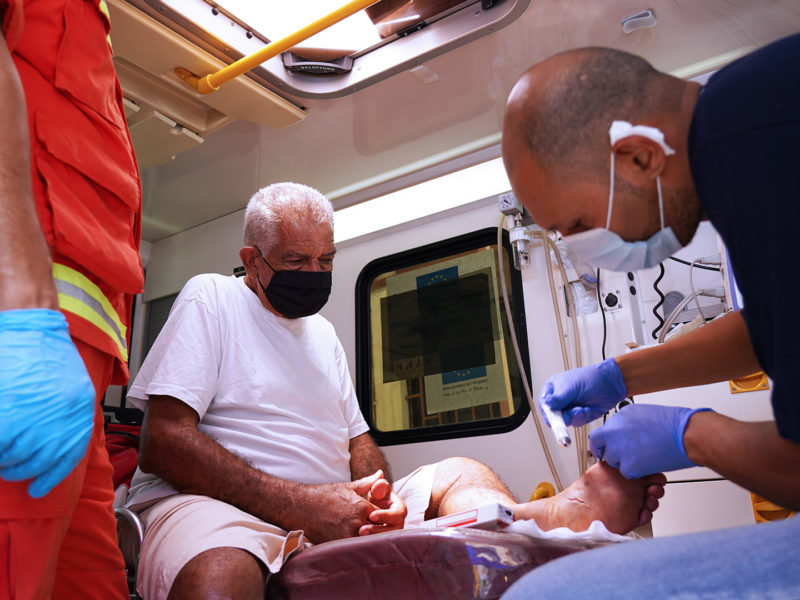 International Medical Corps responds to emergencies around the world, no matter where, no matter the conditions. But our teams do not often find themselves responding to unexpected emergencies in their own neighborhoods. On August 4, 2020 – when a massive explosion tore through Beirut, Lebanon, killing at least 220 people, injuring more than 6,000 and leaving some 300,000 homeless – our team did.

International Medical Corps has about 100 staff members based in Beirut, including Adam, our Project Coordinator, who was running near the Port of Beirut at the time of the explosion. “On the way, as I got closer, there was a series of small fireworks. A few moments later, a very big explosion stopped me in my tracks,” Adam explained. “A huge fireball went up. Then the white blast, sphere-like cloud came directly at me. In the split seconds after seeing the explosion, I hit the ground to try and protect myself. I thought I was about to be incinerated on the floor.” Luckily, Adam was uninjured. Following the explosion, he recalls, “I navigated through central Beirut, which was just totally catastrophic. Glass, buildings destroyed, the facades in disrepair, many, many people injured.”

The blast left more than half of Beirut’s health facilities non-functional. The remaining facilities were overwhelmed, limiting the amount of emergency care available in Beirut. Healthcare workers were reportedly among the killed, and nurses and doctors were in high demand. The blast also affected the country’s stores of vaccines, medicines, medical equipment and reproductive health supplies, leading to acute shortages of vital medicines.

“The blast was really a big disaster. Most people in Beirut were affected. The big issue is that people lost their houses and there were around 300,000 people without shelter. There is a lot of work to be done,” described Dr. Nada, Sr. Medical Advisor.

International Medical Corps quickly launched an emergency response, coordinating efforts with international aid agencies, the Ministry of Public Health (MoPH) and other international non-governmental organizations in the country. We provide medicine, medical and cleaning supplies and personal protective equipment (PPE) to some 27 hospitals and other healthcare centers. In the months following the explosion, we distributed more than 160,000 masks, 300,000 pairs of nitrile gloves and 16,000 surgical gowns, and our efforts continue today.

In addition, we deployed two mobile medical units (MMUs) and mental health and psychosocial support (MHPSS) shelters, providing medical care and mental health services to patients affected by the blast. The MMUs, operating in the first weeks of the blast’s impact, provided critical relief to healthcare facilities, while meeting the urgent needs of residents. During that time our team provided medical consultations to 1,121 patients.

Rima, International Medical Corps’ Communications Manager in Lebanon, recounted, “We treated wounds, stitches, and the mental health team was available to provide psychological first aid to all those affected. The support that we have received from all over the world has been tremendous. It has made a huge difference and we’re very, very grateful.”

With the generosity of the GlobalGiving community and other donors, International Medical Corps has responded immediately to the explosion in Beirut and continues to address the needs that persist – providing PPE, medical supplies, medical care and mental health services to those affected by the blast. Thank you! 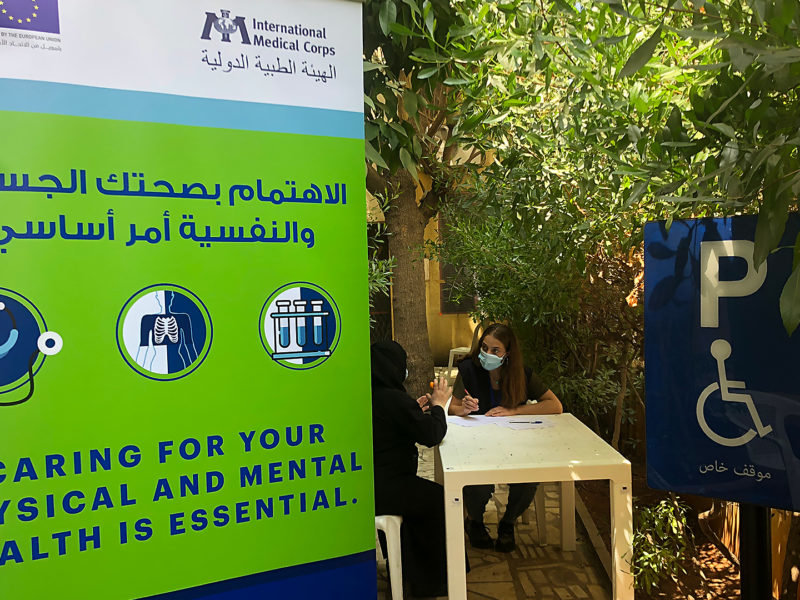 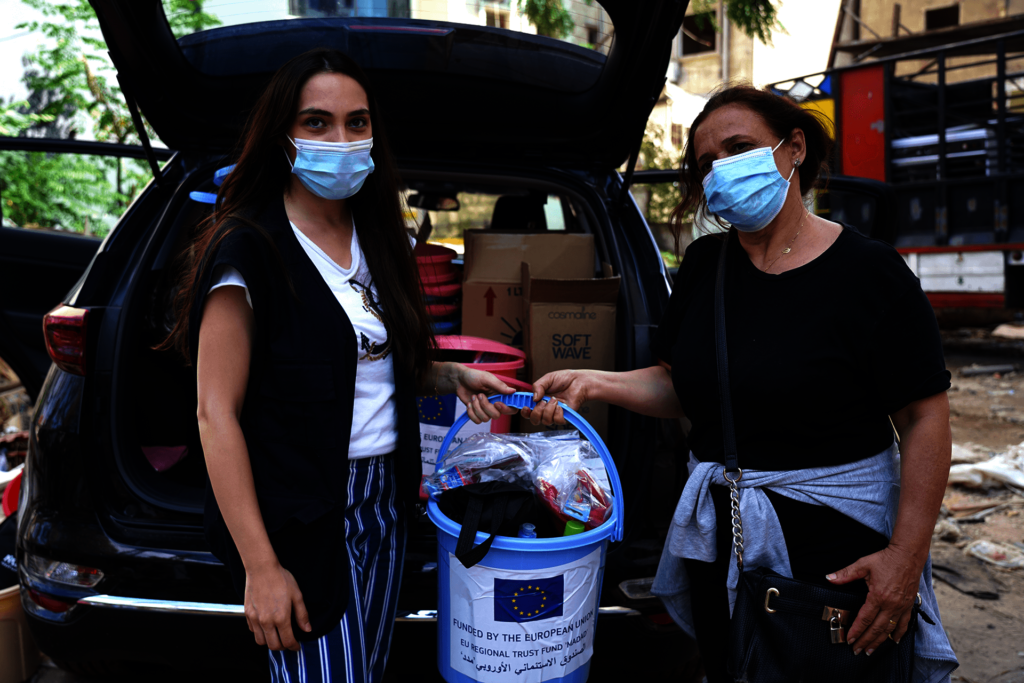 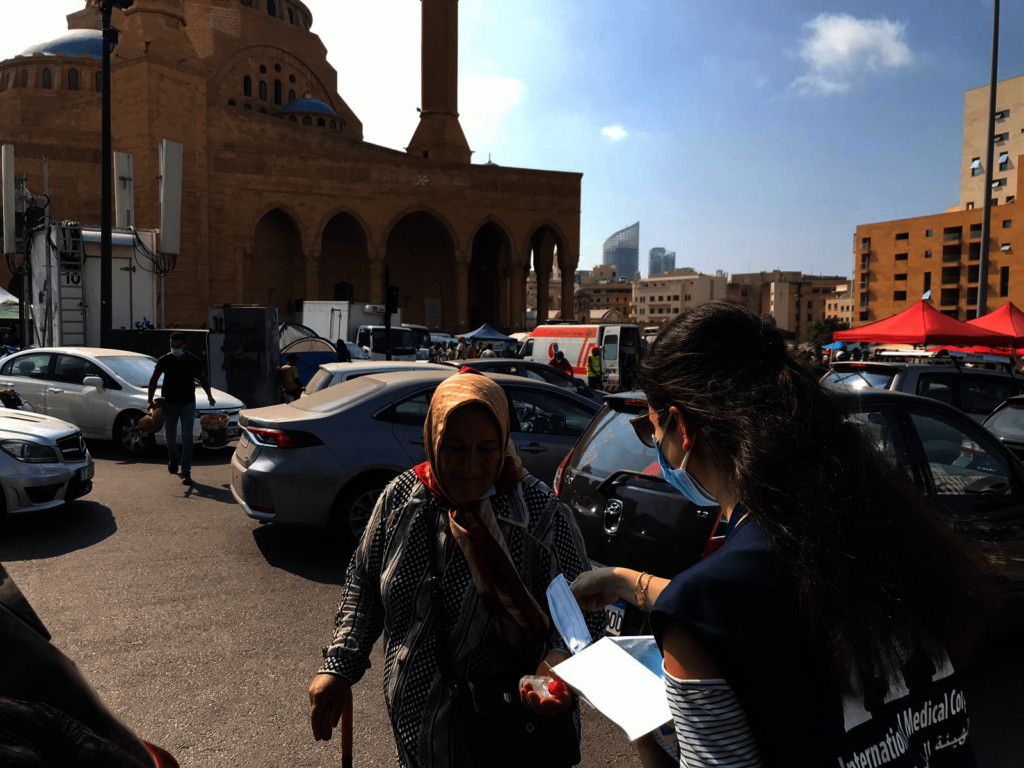 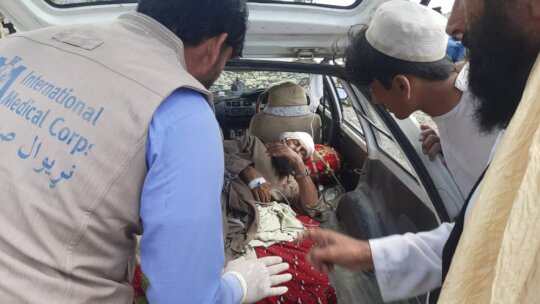 Responding to the Afghanistan Earthquake
Find a Project

GlobalGiving
Guarantee
Donate https://www.globalgiving.org/dy/cart/view/gg.html?cmd=addItem&projid=48339&rf=microdata&frequency=ONCE&amount=25
Please Note
WARNING: Javascript is currently disabled or is not available in your browser. GlobalGiving makes extensive use of Javascript and will not function properly with Javascript disabled. Please enable Javascript and refresh this page.