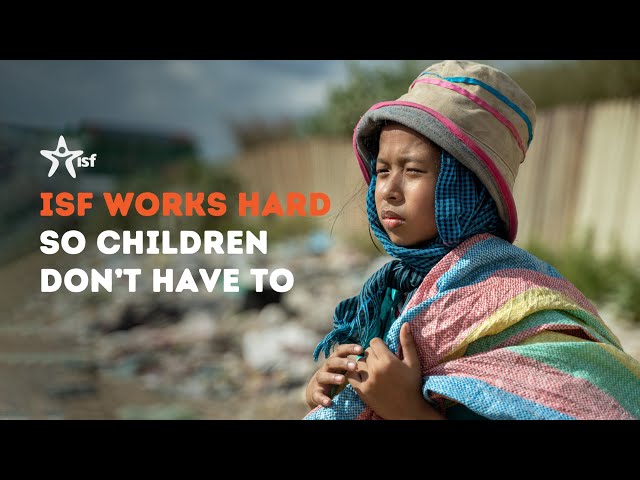 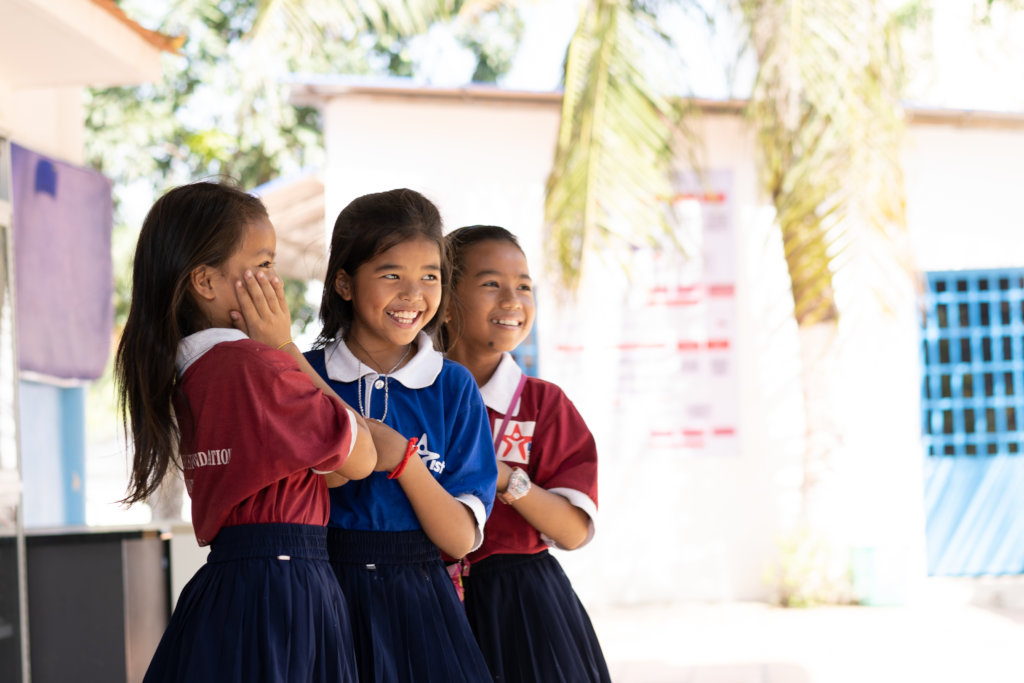 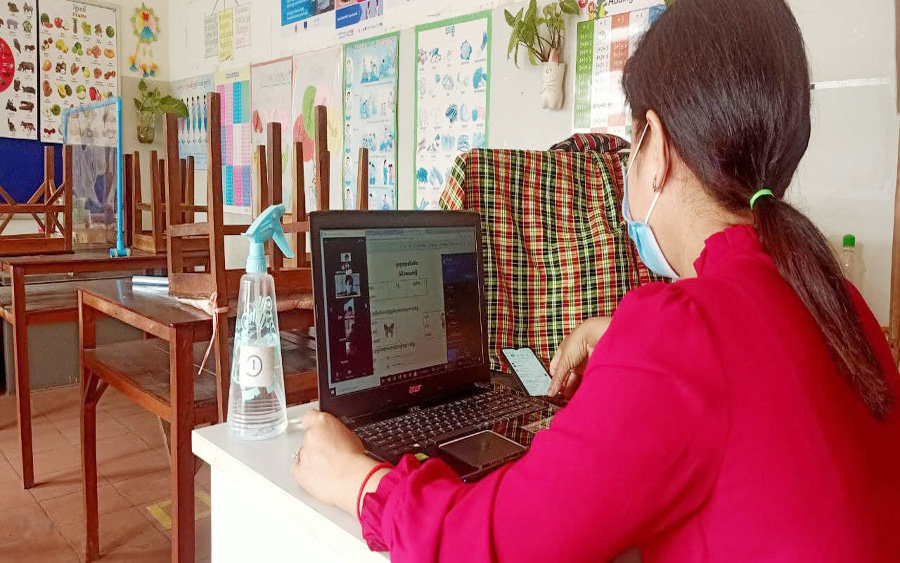 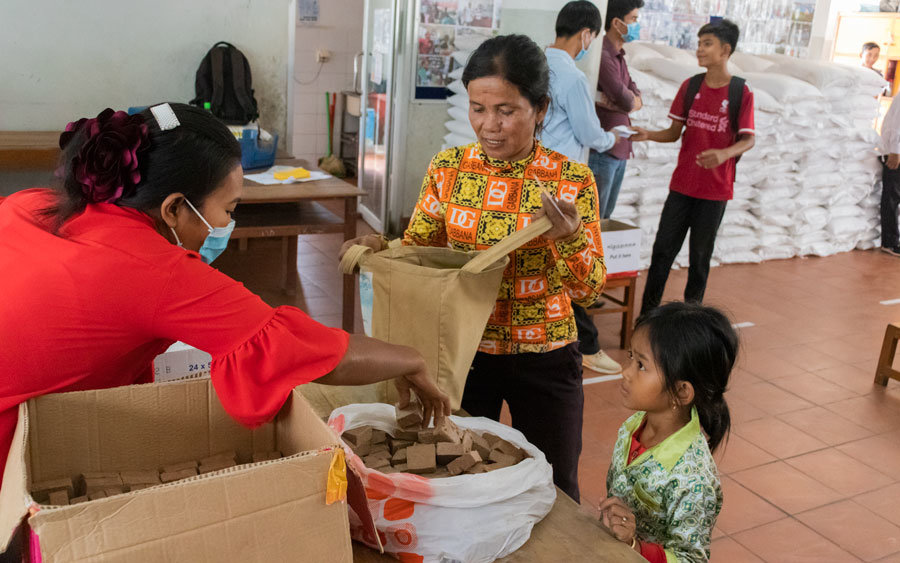 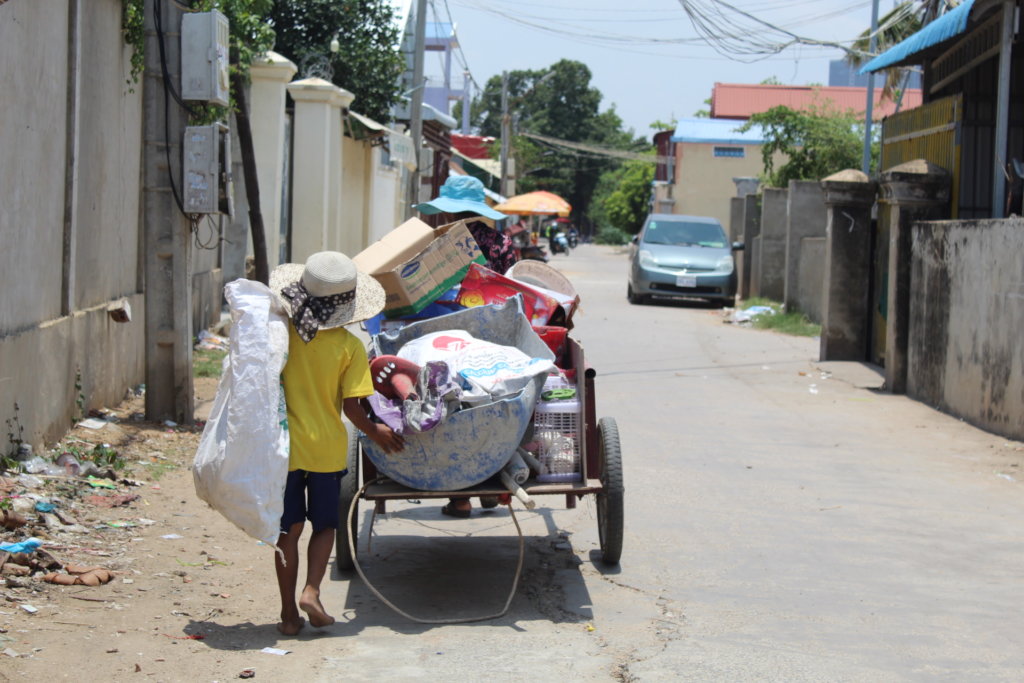 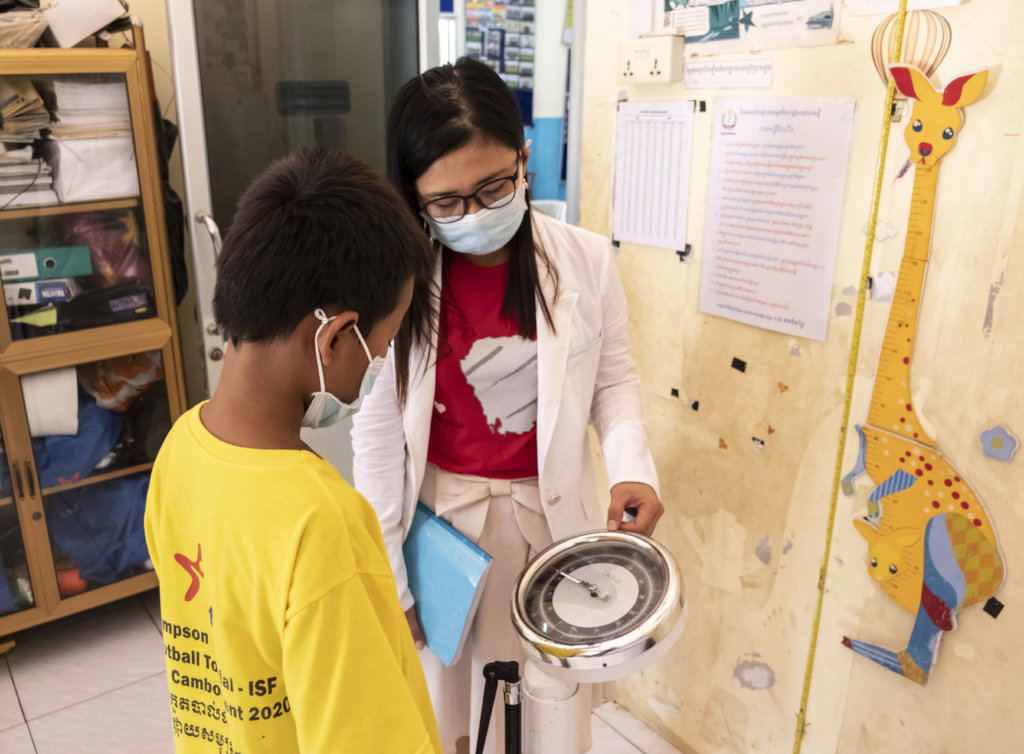 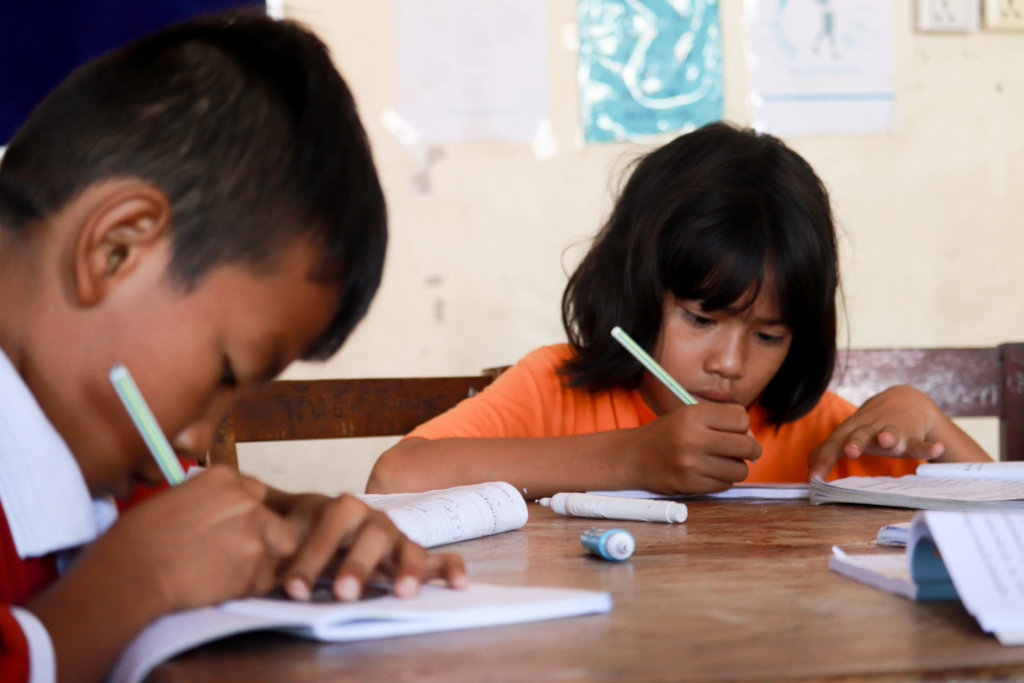 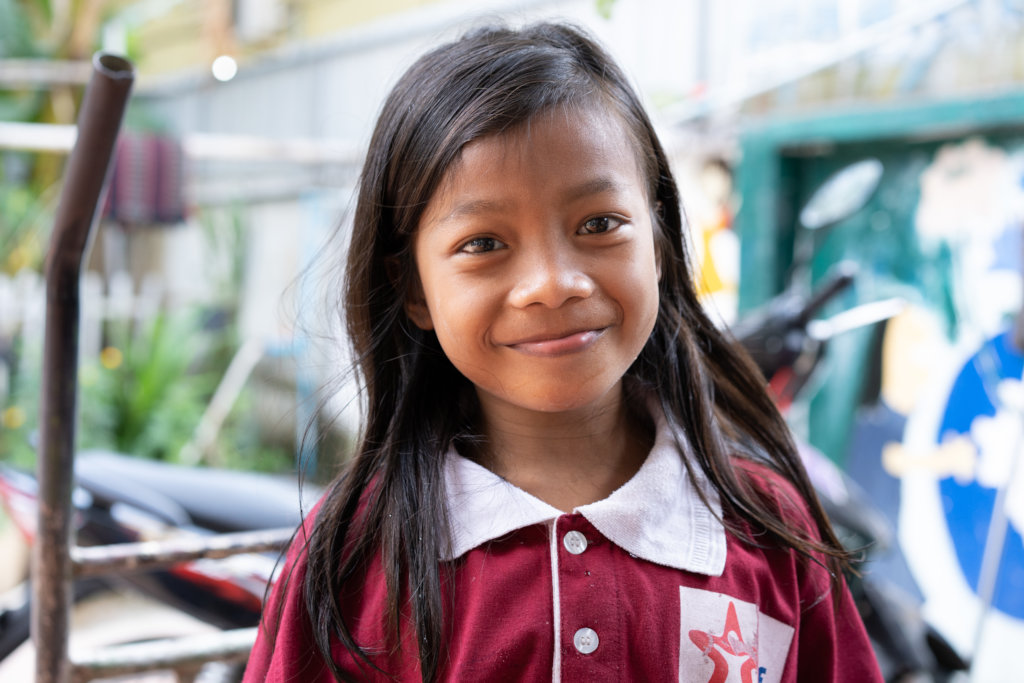 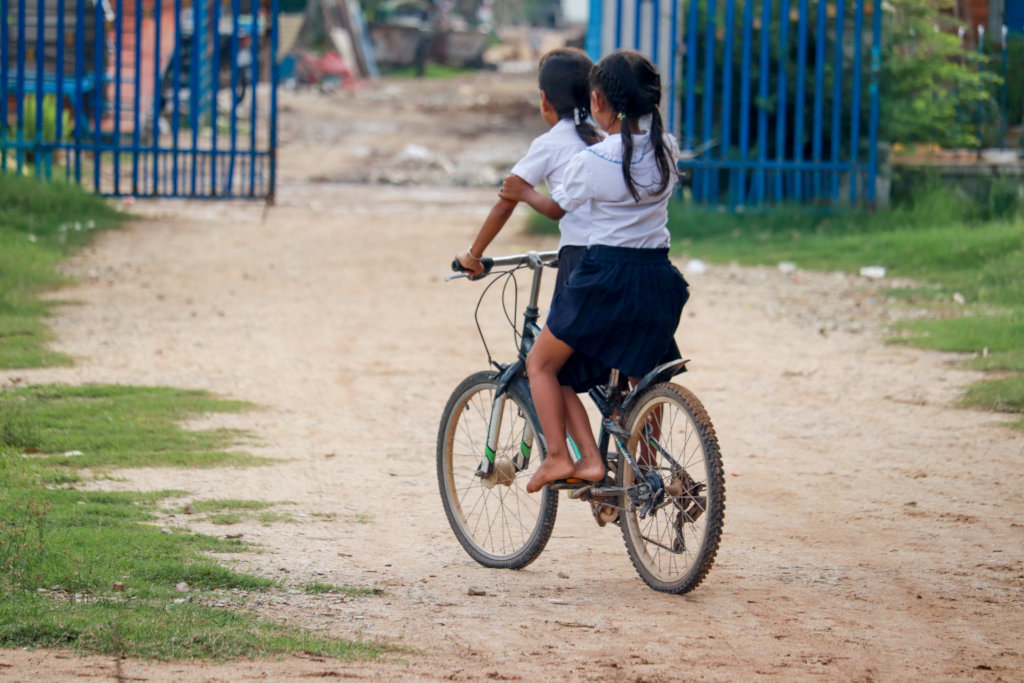 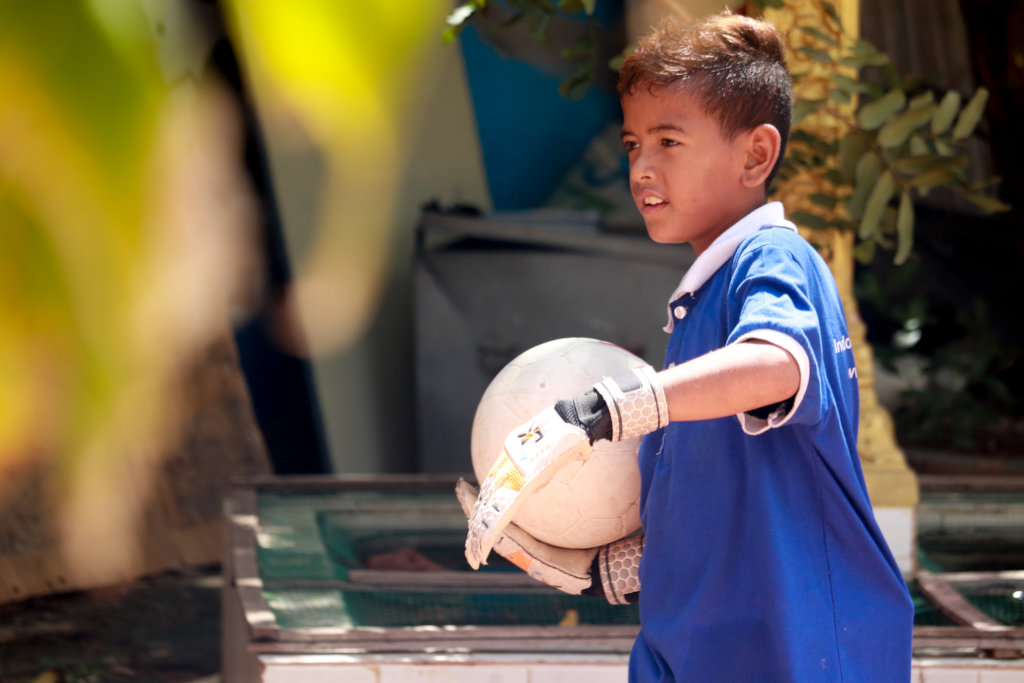 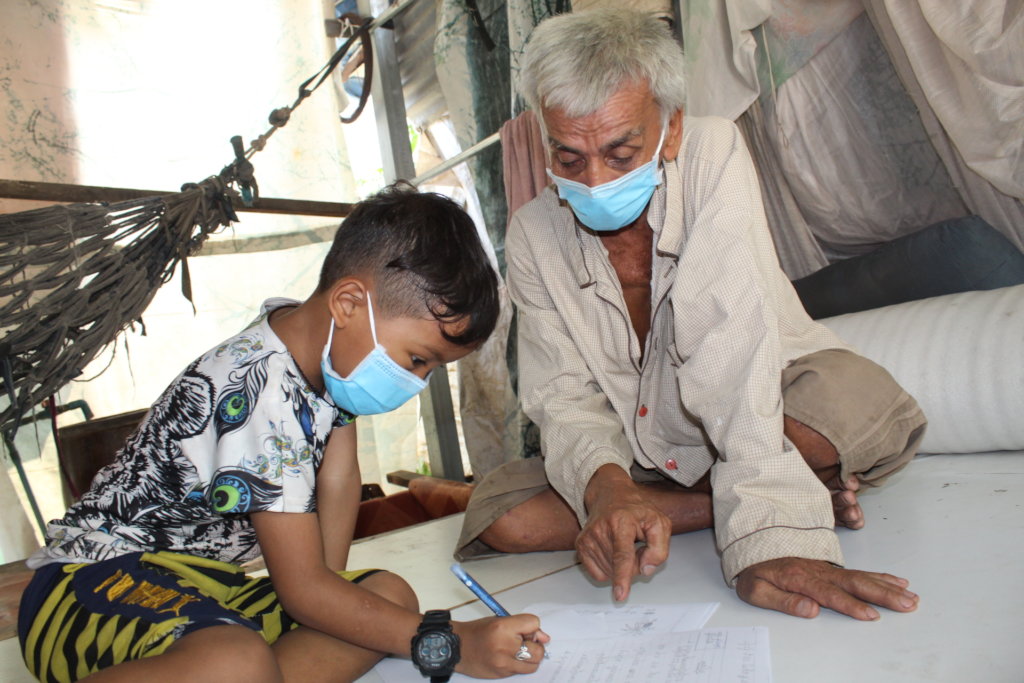 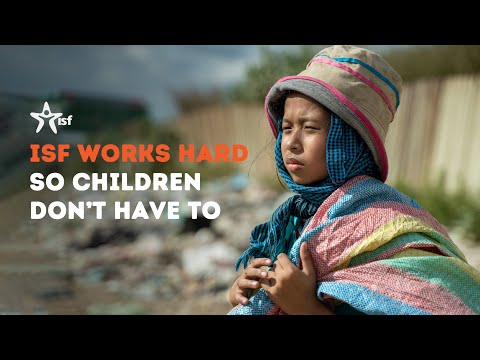 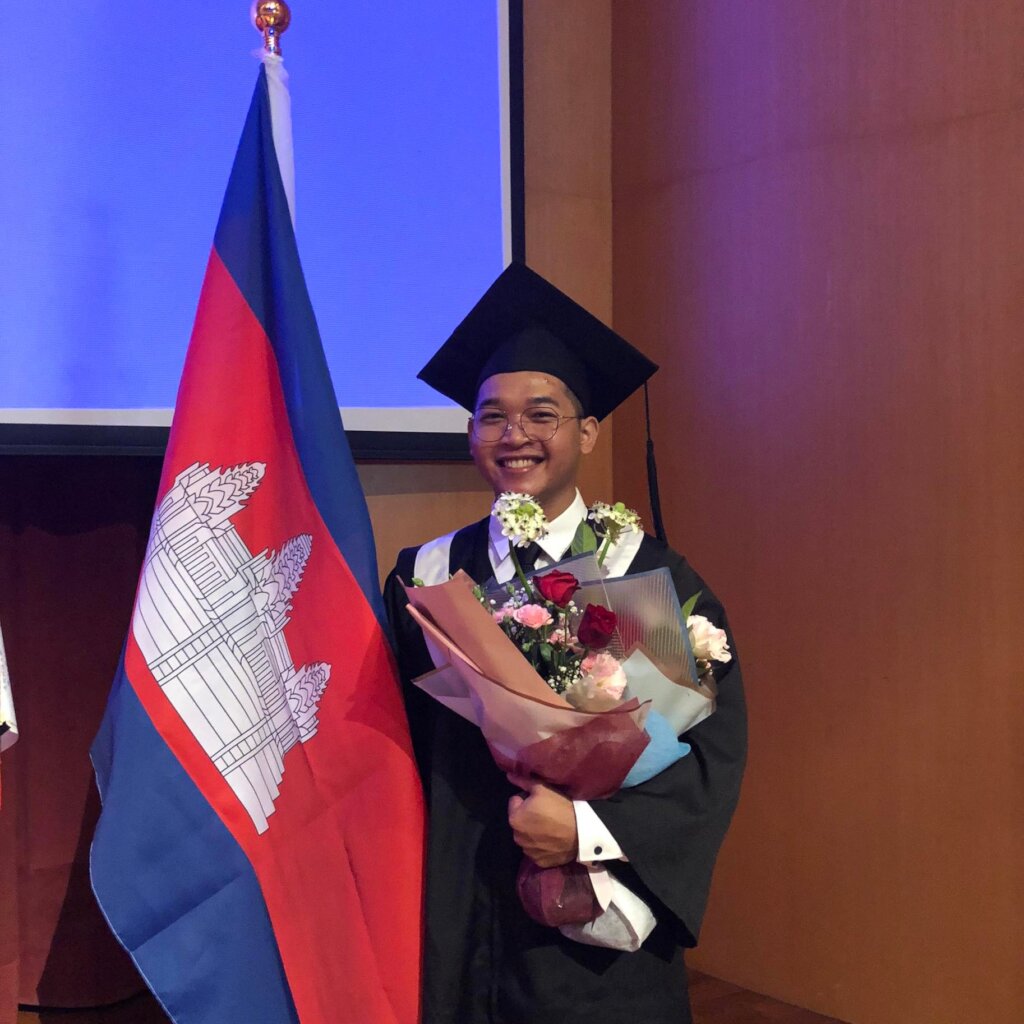 In Cambodia, extreme poverty forces marginalised children out of the school system. In fact, only 5% of the poorest youth will graduate from secondary school (UNICEF, 2019).  Through ISF’s Education Programme, we break down barriers to education for vulnerable children from two of Phnom Penh’s poorest areas for as long as they remain in school - from basic education on to university and/ or employment.

We are delighted that, in January of 2022, ISF’s first high school graduate Neng Bunleng has received his Bachelor of Tourism and Creation Management from the National Taiwan University.

Completing high school was a significant milestone in itself for Bunleng. Reflecting on his youth, Bunleng shares that he often didn’t have enough to eat - his family would scavenge for food from the nearby drainage system. When financial instability forced him out of Cambodia’s education system, he fell behind his age-appropriate grade and lost hope for the future.  However, after enrolling in Grade 3 of ISF’s Catch-Up Education Programme, Bunleng and his family received the resources, support, and mentorship to help him become one of three in ISF’s first graduating class of 2017.

ISF’s support did not stop there though. For youths like Bunleng who want to continue on to higher education, we continue to assist them on their educational journey with a package of specialised support. After briefly studying Business Management at the University of Cambodia, Bunleng received a 50% scholarship from the National Taiwan University in 2018.

Over the next four years, Bunleng immersed himself in his studies and life in a new country.  Having initially struggled with the language barrier, he quickly became fluent in Chinese and his part-time job in a local shop provided the perfect chance  to improve his language skills. ISF’s Employment Team kept in regular contact with Bunleng to check on his academic progress and wellbeing, offering the necessary support he needed to overcome any challenges he faced along the way.

Before joining ISF, Bunleng thought he would end up working as a construction worker and had little hope for the future. However, his resilience and hard work to achieve his dream of going to university and studying abroad became a reality and he graduated first in his class with a handful of certifications.

Inspired by his journey with ISF,  since graduating Bunleng has  joined the team at Formosa Budding Hope Association (FBHA) - a Taiwanese NGO that alleviates poverty through education in Cambodia, India, Vietnam, and Taiwan. Although different from his initial goal of becoming a businessman, he explains: “Poverty means children can’t study in primary school. After learning the impact of their [FBHA’s] work, I wanted to get more involved. What the NGO is doing is similar to what ISF does, and by working with them, I feel that I’m paying back to others.”

Bunleng’s  significant achievement is not only testament to his hard work and dedication, but the ongoing holistic support that has been provided to him through our Education Programme. ISF’s entire team is proud of what Bunleng has achieved and touched that the life-changing programmes have impacted him and inspired him to continue paying it forward.

Creating Sustainable Pathways Out of Poverty

For 15 years, ISF has fought to give Cambodian children living in poverty the education, healthcare, and childhood they deserve. While he is the first to graduate from university,  Bunleng joins 64 other ISF students who have completed their education and found gainful employment with our help.

It is only thanks to supporters like you that this has been possible. Your continued support offers youths like Bunleng the tools they need to create sustainable pathways out of poverty. Thank you for your long-lasting generosity.

The most effective way to help more students like Bungleng is setting up a regular gift to ISF. In a country where only 15% of youth will go on to higher education, your monthly donation to our Education Programme can change a life. If you set up a monthly donation today, GlobalGiving will also match your first donation at 100% after four consecutive payments - making your support go even further!

Thank you for giving vulnerable children the chance to achieve their dreams. 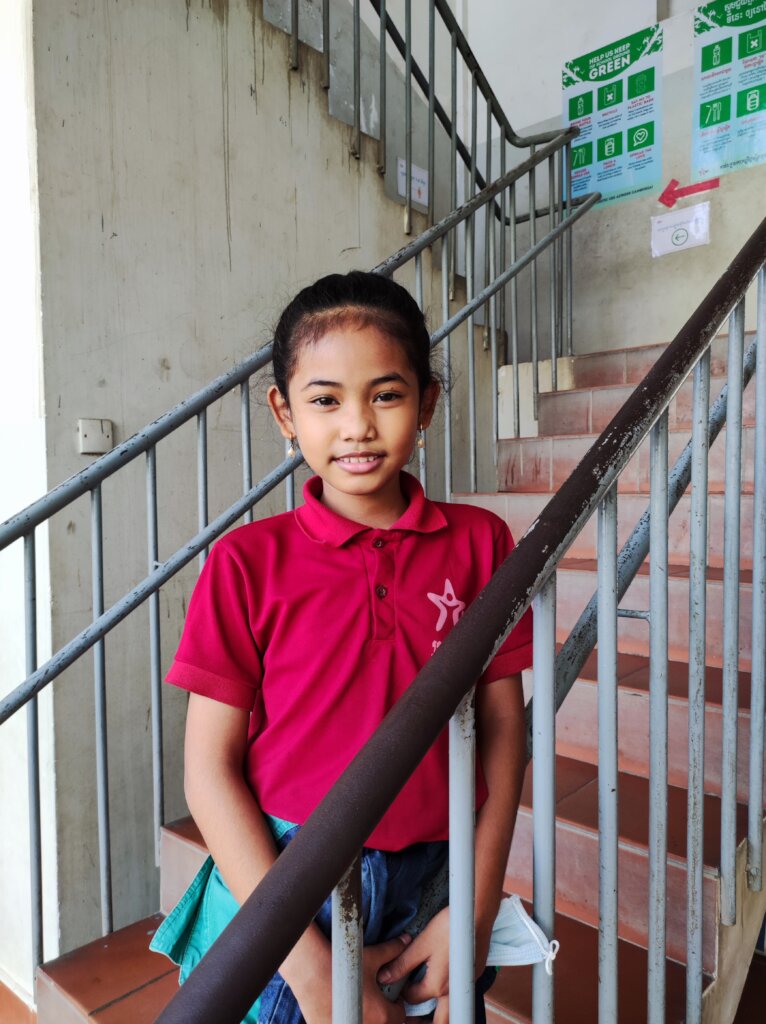 After a year and a half of empty classrooms and silent hallways, ISF is thrilled to share that in early November we welcomed our students back on to campus. Students like Monika*, who couldn’t wait to get back to school.

Since Monika  started with ISF’s Catch-Up Programme in 2019, she’s made a number of new friends and blossomed under the guidance of her teachers.  While she studies with us, she also has access to healthcare, sport. and nutritional support to break down barriers to education. This includes two meals each school day which are Monika’s favourite!

During school closures, Monika missed coming to campus and found learning at home away from her classmates difficult. However, with help from our teachers and social workers, she continued to study hard so she could catch up on the education she had missed out on as her family couldn't afford to send her to school.

ISF believes education is the foundation for a better and brighter future. Our innovative Education Programme works to catch students like Monika up to the correct grade for their age so they can integrate into the state school system. Learning two grades of the Khmer curriculum in one, students also receive English and IT lessons, tablet -based learning, sports, and soft-skill development activities.

With the new academic year fast approaching, we have been working hard to enroll new students to join Monika and 130 students like her who are already benefiting from this holistic support through our Catch-Up Programme. With the uncertainty that the pandemic brought, this was not something we were able to offer in 2021 and the ISF team are eager and excited to welcome new students.

Can you help us support more students like Monika?

At a time where schools in Cambodia have finally been able to reopen, ISF is facing a significant funding gap which is threatening the education of our vulnerable students.

ISF’s First Day at School Campaign aims to raise enough funds for 50 out-of-school children to join our Catch-Up Programme. These children will likely have never been to school before or were forced to drop out due to extreme poverty. Can you support ISF once again and help us achieve our goal?

You can donate here to keep classroom doors open for vulnerable children in Phnom Penh!

Thank you so much again for everything you have already done for ISF and helping to create pathways out of poverty for our students and their families. We simply couldn’t do it without you.

PS. If you haven’t already, you can sign up to our newsletter to find out more about what we are up to and the impact your support makes. 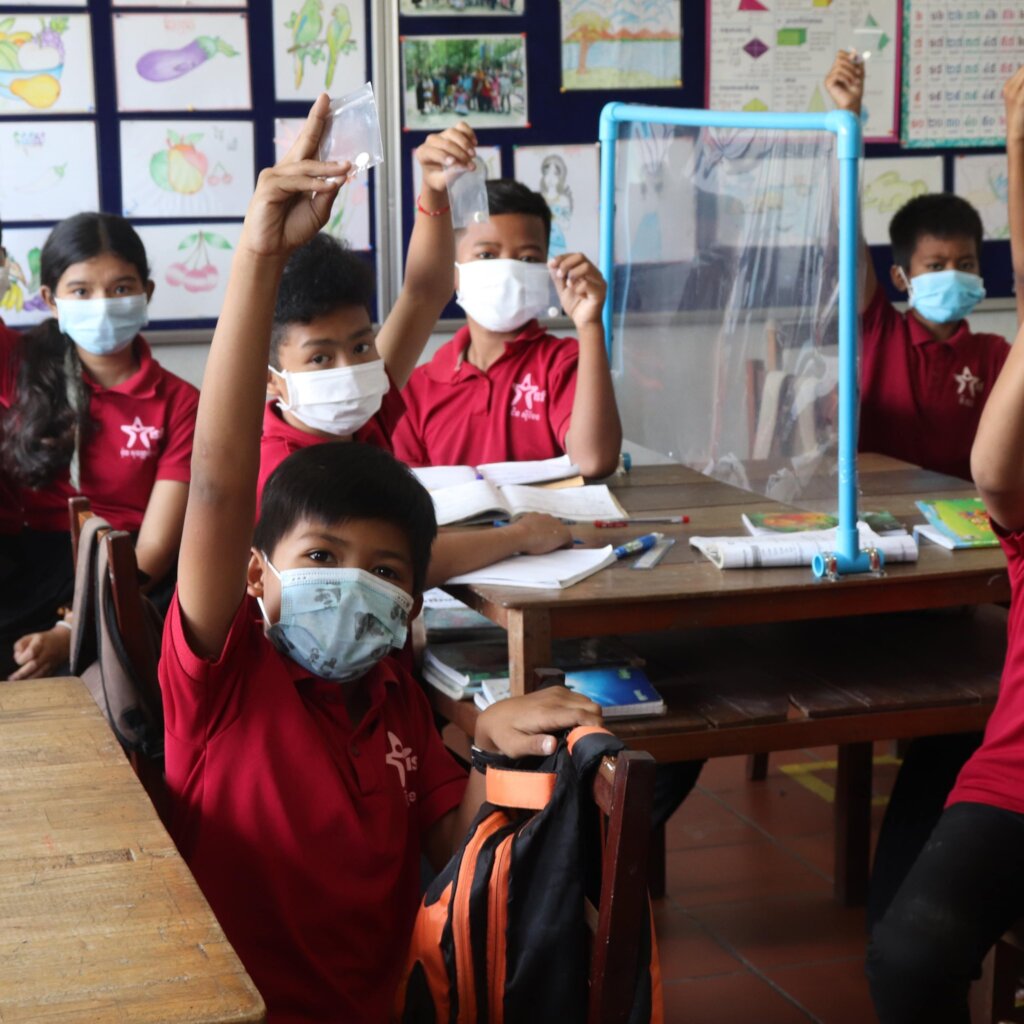 Project Leader:
Margherita Chiarolanza
Phnom Penh, Cambodia
$28,143 raised of $40,000 goal
You last donated to this project on
195 donations
$11,857 to go
* Amounts in US Dollars
Donate Now
Donate once
Donate monthly
$10
USD
will feed a student's family for a month so no one has to go hungry
›
$20
USD
will pay for a uniform and a backpack for one child for a year.
›
$35
USD
will provide a bicycle for a student to travel to school
›
$40
USD
will pay for 4 experiential trips for one student providing the chance to learn, explore, and have fun.
›
$100
USD
will provide breakfast and lunch (Monday-Saturday) for six students for a month
›
$250
USD
will provide vital education, health, and livelihood support from an ISF social worker to vulnerable children and their families.
›
$500
USD
Will provide stationary and educational resources to one class of 25 students for a year
›
$1,600
USD
Will pay for one child's education, healthcare, nutrition, and play for one year
›

Make a monthly donation & get matched today at 100% while funds remain. Terms and conditions apply.
Give the gift of stability in a time of instability. Set up an automatic, monthly gift now and get matched at 100%—because the COVID-19 pandemic has hurt us all, and it will take all of us to overcome it. Terms and conditions apply.
Monthly giving is as easy, safe, and as inexpensive as a Netflix subscription. Start a monthly donation to Indochina Starfish Foundation today and get matched at 100%. Terms and conditions apply.
$10
USD
monthly
will provide a family with a monthly food parcel to mitigate the risk of students dropping out of school
›
$15
USD
monthly
can provide a student with breakfast and lunch (Monday-Saturday) each month
›
$50
USD
monthly
will provide breakfast and lunch (Monday - Saturday) for three students each month
›
$125
USD
monthly
will provide a vulnerable child with quality education and holistic support for a year
›
$250
USD
monthly
will pay a teacher's monthly salary each month to provide quality education to disadvantaged children.
›

Donating through GlobalGiving is safe, secure, and easy with many payment options to choose from. View other ways to donate
Indochina Starfish Foundation has earned this recognition on GlobalGiving:

GlobalGiving
Guarantee
Donate https://www.globalgiving.org/dy/cart/view/gg.html?cmd=addItem&projid=54088&rf=microdata&frequency=ONCE&amount=25
Please Note
WARNING: Javascript is currently disabled or is not available in your browser. GlobalGiving makes extensive use of Javascript and will not function properly with Javascript disabled. Please enable Javascript and refresh this page.