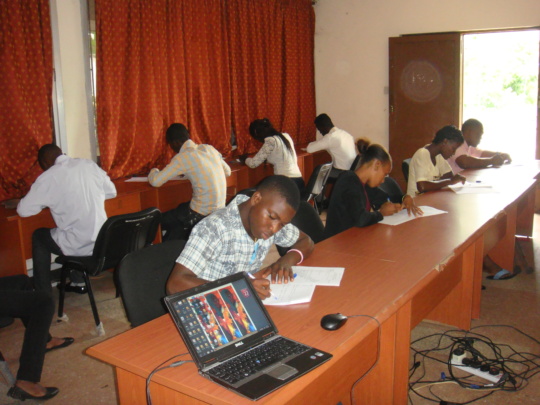 Youths make up 65% of the population of Sierra Leone and a third of that percentage is unemployed and lack the means to start their own businesses.

Our organization seeks to support a large school dropouts of youths who are victims of many unfortunate circumstances, the very awkward situation in which these youths find themselves need immediate special attention most certainly if given an opportunity by offering them special training for jobs and some skills to enable them become self-reliant.

The funds raised so far through the Global Giving platform have enabled us provide training materials for 10 youths in Freetown, Sierra Leone.

We would like to express our sincere thanks and appreciation to our partners and friends who donated their hardearned cash towards this project through the GlobalGiving platform. Your precious donations contributed greatly in helping youths in Sierra Leone rise above extreme poverty and also be able to secure much needed intrepreneurship skills. 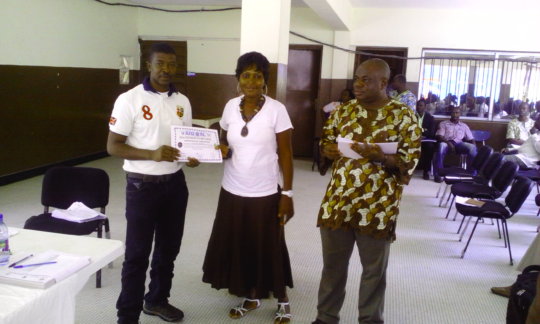 Distribution of certificates to women

According to the UN Human Development Index, Sierra Leone is ranked as one of the poorest countries in the world. Within this frame of generalized poverty, women come worse off and have been found to be poorer than men. This is due to gender disparities existing with respect to access to and control of a range of assets including direct productive assets such as land and macro credit, human capital assets including education and health, etc.

Also, in Sierra Leone, over 60% of women are being beaten and forced to have sex by their intimate male partners. Our organization seeks to address such abuse and other heightened levels of discrimination and violence against Women by enhancing advocacy and networking capacities among Women groups and promoting coordination for increased success in anti-discrimination and violence campaigns in the country.

The funds raised so far through the Global Giving platform have enabled us provide much needed women's empowerment and human rights training for at least 5 rural community women in the Waterloo District, Sierra Leone. Also, some sensitization programs with regards women's empowerment, discrimination and abuse were carried out by the organization.

We would like to express our sincere thanks and appreciation to our partners and friends who donated their hardearned cash towards this project through the GlobalGiving platform. Together, we're making a difference in the lives of women in Sierra Leone. 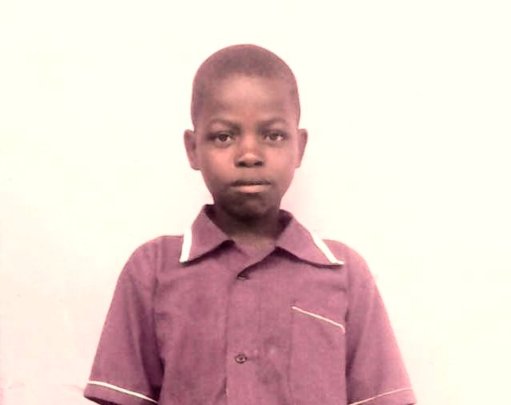 In Sierra Leone, the Ebola virus was first detected in the Eastern part of the country, Kialahun on the 25th May 2014. The outbreak was new in West Africa, especially Sierra Leone. It was said a woman from that district visited neighboring Guinea which shares a border with Sierra Leone to witness a funeral ceremony, on her return, she fell sick and died. All the family members who helped her also got sick and died. From that unusual incident, the villagers reported to the only established hospital for such cases in the country in Kenema which is also located in the same region. At the Kenema referral hospital, it was discovered that it was indeed the Ebola virus that has surfaced in that community.

It is sad to note that within the first six to twelve months of the outbreak the entire country was hit with the virus which had spread to all fourteen districts which includes western area, Fretown.

Through the Ebola Orphans Aid  project, our organization aims at supporting at least 500 children orphaned by the deadly Ebola virus. The funds raised so far through the GlobalGiving platform has enabled us provide much needed food, clothing, school supplies, trauma counselling for at least 40 Orphans in Freetown and 20 Orphans in Makeni. Also, some sensitization programs with regards stigmatization, marginalization and abuse were carried out by the organization.

We would like to express our sincere thanks and appreciation to our partners and friends who donated their hard-earned  cash towards this project through the GlobalGiving platform.