As part of a joint endeavour to step up protection for the growing numbers of children and others with specific needs arriving in Europe, UNHCR, the UN Refugee Agency, and UNICEF are setting up special support centres for children and families along the most frequently used migration routes in Europe.

Twenty Child and Family Support Hubs, to be known as “Blue Dots,” will provide a safe space for children and their families, vital services, play, protection and counselling in a single location. The hubs aim to support vulnerable families on the move, especially the many unaccompanied or separated children at risk of sickness, trauma, violence, exploitation and trafficking.

A refugee family from Afghanistan walk towards the Tabanovce reception centre for in the former Yugoslav Republic of Macedonia.

While the situation continues to evolve, at present the first hubs are now operational or about to open in Greece, the former Yugoslav Republic of Macedonia, Serbia, Croatia and Slovenia. All 20 will be operational within the next three months.

The “Blue Dot” hubs come at a time when women and children account for two thirds of those crossing to Europe: In February, women and children made up nearly 60 per cent of sea arrivals compared to 27 per cent in September 2015. They will also aim to identify and protect children and adolescents travelling alone, and reunite them with family wherever possible, depending on their best interests.

“We are concerned about the welfare of unaccompanied boys and girls on the move and unprotected across Europe, many of whom have experienced war and hardship in making these journeys alone,” said UNHCR Assistant High Commissioner for Protection Volker Türk. “The hubs will play a key role in identifying these children and providing the protection they need in an unfamiliar environment, where they may be at risk,” he added.

“The lives of children on the move have been turned upside down, they have faced turmoil and distress every step of the way. The hubs will offer a level of predictability, certainty, and safety in their uncertain lives, a place where they can get the help and support that is every child’s right. And they will contribute to stronger national child protection systems,” said Marie-Pierre Poirier, UNICEF’s Special Co-ordinator for the Refugee and Migrant Crisis in Europe.

But identifying children in need is challenging. In some countries, young travellers pretend to be adults to avoid being delayed or detained on their journey, exposing them to the risk of exploitation. Last year, more than 90,000 unaccompanied or separated children registered and applied for asylum or were in care in Europe, mostly in Germany and Sweden.

The Child and Family Support Hubs will be clearly identifiable and provide a standardized and consistent basic package of services provided by different organizations, including National Red Cross Societies and NGO partners. However they do not replace the responsibility and obligation of the states to do all they can to support and protect unaccompanied and separated children and to prevent sexual and gender-based violence.

The hubs will be located in selected strategic sites - border entry/exit points, registration sites, some strategic urban centres - as well as through mobile/outreach teams. The services include: 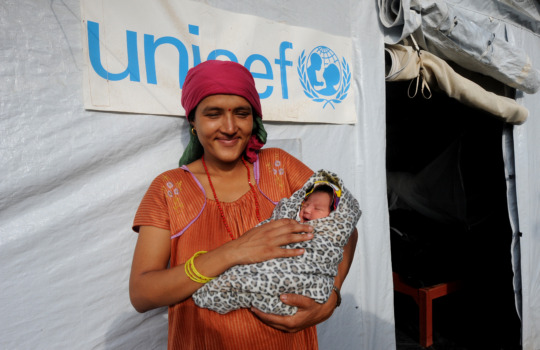 Sumitra Poudel holds her newborn outside

The humanitarian situation has improved over the past months, hundreds of thousands of children still need shelter, food, access to water and sanitation, medical care, education and protection.

"When a major disaster strikes like the earthquakes on 25 April and 12 May, it incurs not only loss of lives but also destruction of assets, sources of livelihoods and substantially reduces household income particularly among the most vulnerable population," said Tomoo Hozumi, UNICEF Representative in Nepal.

"We know that when going through difficult times, poor households often resort to harmful coping strategies, such as reducing their food consumption, cutting down their health and education expenditure, and sending their children to work – all of which can have irreversible negative consequences on them and more so on their children," Hozumi said.

"The top-up cash provided will help vulnerable households to at least meet some of their basic needs such as food and medicine without further resorting to harmful coping strategies during these lean times."

To help address the immediate needs of children and their families affected by the quakes, UNICEF is providing $15 million worth of direct cash transfers to approximately 330,000 households, including an estimated 450,000 children, in 19 districts most affected by the earthquakes. This support, channeled through existing government social assistance programmes, is reaching vulnerable individuals including Dalit children, people with disabilities, widows, the elderly and marginalised ethnic groups.

”The earthquake has exposed the fragility of Nepal’s progress in terms of poverty reduction,” continued Hozumi. “Looking beyond immediate relief, one of the priorities for UNICEF is to assist the government to phase in a reliable and predictable form of income support for children and their families. Strengthening and expanding the country’s social protection system and improving its responsiveness to shocks will contribute to children's well-being and development during normal times and increase their families’ ability to cope in case of future disasters.”

Since April, UNICEF has also been providing a wide range of services to the children and families living in the areas worst hit by the earthquakes including:

“Together with the Government and partners, we have been able to achieve a lot in the past 90 days.  At the same time, given the enormity of the damages and losses, and the possible impact of the monsoons, there is a lot more to be done to bring a sense of normalcy to the lives of the earthquake survivors especially the most vulnerable amongst them," said Hozumi. 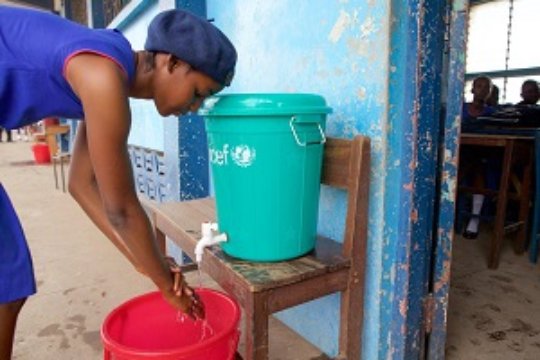 A girl washes her hands, an important prevention.

The WHO declaration marking the end of the Ebola outbreak in Sierra Leone today is welcomed by UNICEF as a major victory for the large-scale and coordinated 18-month response. But enhanced surveillance must continue so that the country is ready for any possible future outbreaks, and work must also intensify to support those affected by the outbreak and to build a resilient recovery.

During the outbreak, UNICEF played a key role in supplying medical equipment, shipping more than half a million protective suits for health workers. UNICEF set up Ebola community care centres to rapidly scale up the number of Ebola beds in 2014, established care centres for affected children, and engaged communities with Ebola safety messages through radio, text messages, posters and door-to-door visits.

In support of the Government, UNICEF also played a critical role in the reopening of schools, the restarting of mass vaccination campaigns, and in launching projects for vulnerable groups such as Ebola-affected children, those out of school, and girls who became pregnant during the outbreak.

This month, UNICEF with support from the European Union, will launch 16 construction projects to strengthen health facilities across the country. Separately, work will also start this month to build two training schools for Maternal and Child Health Aides.

More than 11,500 children in Sierra Leone were impacted through either Ebola infection, losing parents to the disease, or being in quarantine. At least 1.8 million school children had to wait eight months for classrooms to be reopened.

“There is huge relief at reaching the end of the outbreak”, said Mr Wiffin, “but the outbreak continues next-door in Guinea and until they get to zero, we are staying on high-alert particularly in border districts like Kambia. Neighbouring Liberia also had cases after their outbreak was declared over so we must be extremely vigilant.” 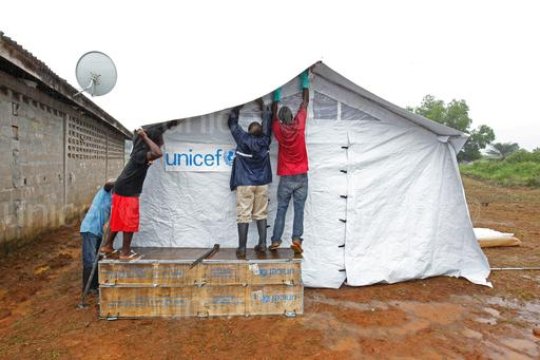 Attachments:
‹ 1 ... 23 24 25 26 27 28 29 30 31 ›
WARNING: Javascript is currently disabled or is not available in your browser. GlobalGiving makes extensive use of Javascript and will not function properly with Javascript disabled. Please enable Javascript and refresh this page.