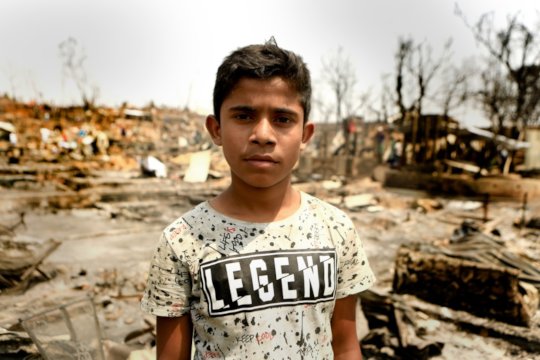 As you may be aware, on March 22, 2021, a massive fire in Cox’s Bazar caused widespread devastation when it quickly spread across four Rohingya refugee camps, displacing around 50,000 refugees, half of whom are children and destroying 142 learning centers, which children rely on to continue their education. In addition, one primary health care center, two nutrition facilities, six water supply networks, 763 latrines and 280 bathing spaces were either severely damaged or destroyed.

During the first 24 hours following the fire, UNICEF’s immediate concern was to ensure the safety and protection of children who were missing or separated from their families. UNICEF and partners sheltered over 70 lost children overnight. By midday the day after the fire, nearly half of these had been successfully reunited with their families.

Junaid and his siblings quickly became separated in the panic and chaos that followed the massive fire in the Rohingya refugee camps in Bangladesh in the afternoon of March 22. Flames quickly engulfed shelters, spreading across four refugee camps and forcing tens of thousands to flee their homes.

Those who had time grabbed their most important possessions. Others were lucky to escape with their lives. The day after the tragedy, the ground remained extremely hot, while the air was heavily polluted and difficult to breathe.

When twelve-year-old Junaid saw UNICEF’s staff on the ground, he ran to meet them, overcome to see familiar faces and help arriving from outside the camp. “We lost everything in the fire. My father and I stayed with our uncle the night of the fire, but we didn’t know what happened to my two siblings, we were so worried. The next day we were reunited, we were overjoyed,” said Junaid.

As the immediate disaster is stabilized, UNICEF and partners are planning a complex rebuilding effort which will need outside support. Children like Junaid have seen their learning centers turned to ashes. “I loved coming to this learning center where I would play with my friends. But everything is gone,” Junaid shared.

Following the fire, UNICEF and partners deployed mobile medical teams to affected areas and provided medical services to 545 patients, including 124 children. With your support, UNICEF has been able to reopen the primary health care center which was partially damaged, and continues to provide medical care for children and their families at the facility. According to the latest figures, 390 children have been successfully reunited with their parents or primary caregivers and 11 temporary Child Friendly Spaces and four Child Protection Help Desks have been established to maintain the continuity of essential services. While working to rehabilitate the learning centers, UNICEF and partners are strengthening care-giver-led home-based learning for children affected by the fire. In addition, UNICEF has provided emergency water and sanitation services to 18,700 people who lost their homes and water, sanitation and hygiene (WASH) facilities due to the fire.

With your generous support, UNICEF will continue to ensure that Rohingya refugee children and their families get back on their feet following this devastating fire. 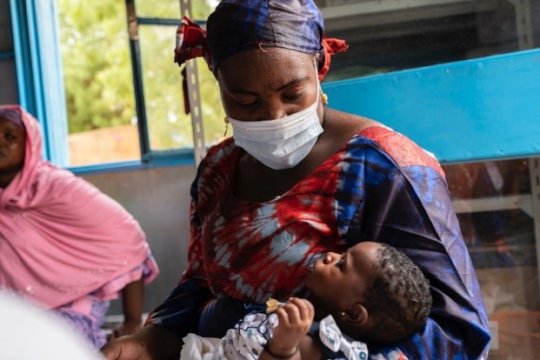 Nearly a year into the novel coronavirus disease (COVID-19) pandemic, it continues to perpetuate an unprecedented socioeconomic, humanitarian, and human rights crisis which is taking its toll on the most vulnerable worldwide. The global COVID-19 pandemic is overstretching health systems, exacerbating deep inequities within countries and across regions, and causing children to face widespread disparities. Alongside governments and global partners, UNICEF is committed to ensuring that decades of progress made in child health is not lost due to COVID-19.

With the biggest vaccine procurement, storage, shipping, cold chain and supply network in the world, UNICEF reaches almost half of the world children with over two billion vaccines annually. For this reason, UNICEF has been asked to play a strategic role of leading efforts to procure and supply COVID-19 vaccines for 92 low-income countries and serve as procurement coordinator for more than 90 high-income countries.

On February 24, Ghana became the first low-resource country to receive free COVID-19 vaccines through this program. “This is a momentous occasion, as the arrival of the COVID-19 vaccines into Ghana is critical in bringing the pandemic to an end," said UNICEF Representative in Ghana Anne-Claire Dufay. "The only way out of this crisis is to ensure that vaccinations are available for all. We thank all partners that are supporting the COVAX Facility to deliver safe and effective COVID-19 vaccines to all countries quickly and fairly."

Thanks to your commitment to this work, UNICEF will ship more than 14.5 million syringes to more than 30 countries in the coming weeks. Your continued support will help ensure that in 2021, UNICEF and partners will deliver two billion vaccines, 165 million therapeutics and 900 million tests to low and middle-income countries in a safe and equitable way. As the pandemic continues, UNICEF is working with partners to reimagine and develop a world that is a safer and more equitable place for communities and children everywhere. In the words of UNICEF Executive Director, Henrietta Fore, “what the world looks like for children and young people tomorrow is our collective responsibility today.” 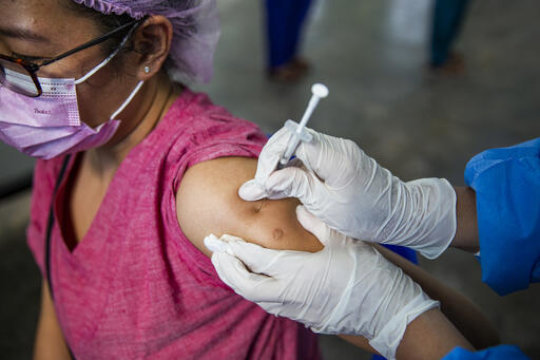 COVID-19 is driving a child survival crisis, with the children at greatest risk of hunger and disease seeing their already fragile health and food systems buckle under the strain of the pandemic. As COVID-19 continues to spread, claiming lives and threatening livelihoods around the world, we know fewer children are dying or falling sick from COVID, but the pandemic is without doubt a child rights crisis. Early estimates of the impacts of COVID-19 on child and maternal mortality in 118 low- and middleincome countries show that disruptions to health systems and reduced access to food could result in an extra 1.2 million deaths of children under age five in just six months. This is in addition to the 2.5 million children under-five who died every six months even before the pandemic.

We know the COVID-19 vaccine will be a critical tool for putting an end to this global pandemic. Over 75 years, UNICEF has built an unprecedented global-health support system. Among its many programs, UNICEF helps immunize more than 45% of the world’s children every year—in some of the most remote places on earth. Due to this experience, UNICEF was chosen to lead global COVID-vaccine procurement and delivery because it’s the only organization with the infrastructure and expertise already in place to make it happen quickly and equitably.

In this role, UNICEF will leverage its market shaping and procurement expertise to help deliver COVID-19 vaccines and other supplies under the COVAX vaccine pillar through two avenues:

Additionally, these efforts will be combined with effective diagnostic and treatment tools, as well as existing prevention and mitigation measures to reduce the spread of the disease, ease pressure on health systems and enable societies to ease restrictions on movement and economic activity.

Thanks to your continued support, UNICEF and partners will deliver two billion vaccines, 245 million therapeutics and 500 million tests to low and middle-income countries in a safe and equitable way in 2021.