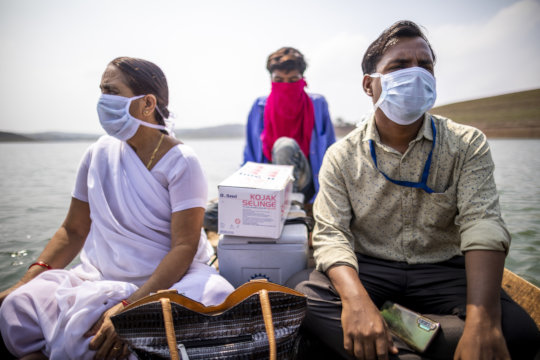 Over a year into the COVID-19 pandemic, it continues to perpetuate an unprecedented health, socioeconomic, and human rights crisis which is taking its toll on the most vulnerable worldwide. The pandemic has threatened hard-won gains to protect and advance children’s rights to adequate health, nutrition and education, and has the potential to cause irreversible damage to the social and emotional development of an entire generation. As of October 19th, 2021, more than 240.6 million COVID-19 cases and 4.89 million deaths have been reported globally. Yet these figures likely underreport the devastation, especially in low- and middle-income countries, where surveillance, testing capacity and data availability can be limited.

Before the pandemic, UNICEF reached approximately 45 percent of the world’s children under the age of five with vaccines each year. Alongside governments and global partners, UNICEF is committed to ensuring that decades of progress made in child health is not lost due to COVID-19. UNICEF delivers results in the most critical areas through various avenues, including the Access to COVID-19 Tools Accelerator (ACT-A). The ACT-Accelerator is a ground-breaking global collaboration to accelerate development, production, and equitable access to COVID-19 tests, treatments, and vaccines - all supported by a strong health system - to reduce mortality and severe disease, restore full societal and economic activity globally.

Despite the significant achievements of the ACT-A collaboration so far, access to COVID-19 tools remains grossly unequal. For example, as of September 13th, 2021, 0.7 percent of people in low-income countries were fully vaccinated against COVID-19, compared with 55.3 percent of people in high-income countries. As a lead implementation partner for ACT-A, UNICEF is uniquely placed to address the implementation challenges that exist in low- and middle-income countries and close this equity gap. The Access to COVID-19 Tools Accelerator is the only coordinated multilateral global mechanism designed to equitably reach vulnerable populations around the globe with COVID-19 vaccines, treatments and tests. Through this unprecedented global coordination, UNICEF and partners have:

With your generous commitment to this work, UNICEF and partners will deliver two billion vaccines, 165 million therapeutics and 900 million tests to low and middle-income countries in a safe and equitable way. 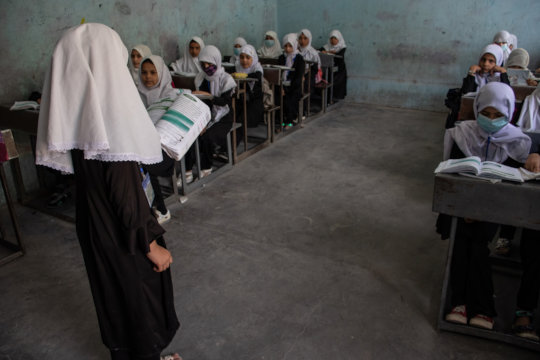 For many years, Afghanistan has been one of the most dangerous places on earth to be a child – and over the past few months, children have been faced with fresh conflict, violence and turmoil. Even at the start of 2021, 18.4 million people – around half of the population - were in need of humanitarian assistance, nearly 10 million of them children. But the humanitarian situation has greatly deteriorated in recent months due to the triple impacts of conflict, COVID-19 and drought, leaving Afghanistan’s children facing a more precarious future than ever. Since the end of May, the number of people displaced by conflict has more than doubled and now stands at 575,000. In addition, pressures on livelihoods and harvests have left 12 million people experiencing emergency or crisis levels of food insecurity.

The situation is fluid and unpredictable – but UNICEF has been delivering life-saving support in Afghanistan for 70 years, and UNICEF is here to stay. Throughout its time in the country, UNICEF has built trust with communities and nurtured community networks, developed lasting relationships with local partners, negotiated with all parties to conflict for access, and become adept at delivering life-saving supplies and services in difficult circumstances. As needs continue to increase in the face of this current complex crisis, UNICEF’s humanitarian work in Afghanistan is more critical than ever.

Thanks to your support, so far in 2021, UNICEF has reached 1.7 million people with humanitarian assistance and despite the many challenges and uncertainties arising from recent events, UNICEF and partners are already supporting mobile health and nutrition teams in camps for Internally Displaced Persons (IDPs). Since the beginning of August, some 2,500 children and 1,700 pregnant and lactating women received basic health services in IDP settlements. Nutrition programs are ongoing and during August, an estimated 11,000 children under the age of five who are suffering from severe acute malnutrition were reached with treatment. In terms of the education response, UNICEF has distributed textbooks, classroom materials and tents in six provinces benefiting over 7,500 children. UNICEF is also providing safe water through water trucking to 12,500 drought-affected people in the Nimroz province which is one of the most water-stressed areas in the country.

UNICEF recently leveraged U-Report, which is a UNICEF-supported free, text message-based service to launch a poll to 100,000 Afghans, including 15,000 girls, to understand their most pressing needs. Most individuals responded that they need cash-based assistance to sustain a livelihood, especially with the winter months ahead. As such, UNICEF is scaling up its cash transfer program which aims to reach 20,000 households (around 140,000 beneficiaries) in the provinces that are most affected by multiple emergencies and which have the highest multidimensional poverty levels, including Samangan, Farah, Faryab, Herat and Kandahar. UNICEF appreciates the commitment of partners and donors to stand together with UNICEF, as it stands with Afghanistan’s children

On August 14, a 7.2 magnitude earthquake hit the southwestern departments of Haiti, resulting in the death of over 2,200 people and leaving a further 12,200 people injured. Approximately 130,000 homes were destroyed, putting thousands of people in urgent need of assistance. Overall, the earthquake is projected to have affected over 800,000 people, including 340,000 children. Unfortunately, two days after the earthquake, Tropical Depression Grace made landfall in Haiti, causing heavy rains which delayed immediate relief efforts and further compounded the humanitarian situation.

These disasters struck Haiti as the country was reeling from the assassination on July 7 of former President Jovenel Moïse, as well as an escalation of gang violence that has led to the displacement of 19,000 people since September. UNICEF reported that gang violence in Haiti’s capital, Port-au-Prince forced nearly 8,500 women and children to flee their homes in just two weeks during the month of June.

Thanks in part to your support, since August 14, UNICEF has been able to scale up its emergency response activities in Haiti. Some of these activities include:

Of particular concern is the impact that the earthquake has had on the education sector. According to the latest assessments, over 730 schools have been damaged or destroyed, leaving 100,000 children at risk of not being to access an education this year. UNICEF is supporting the Ministry of Education to rapidly provide learning spaces for children where it will support the implementation of emergency curriculum for children ages 3-18 as well as provide early childhood development materials, school furniture, textbooks, and teaching materials. In addition, UNICEF will provide the most vulnerable families with cash transfers to support their children’s continued education. While the emergency education response is ongoing, UNICEF will support the rehabilitation of nearly 2,800 individual damaged classrooms

UNICEF and partners have developed a six-month response plan in which UNICEF will continue to work with the government and other partners to provide humanitarian assistance and recovery support to the people most affected by the earthquake, while working to ensure the continuity of essential health, nutrition; water, sanitation and hygiene; education and child protection services.

On behalf of the vulnerable children of Haiti, thank you for your support! 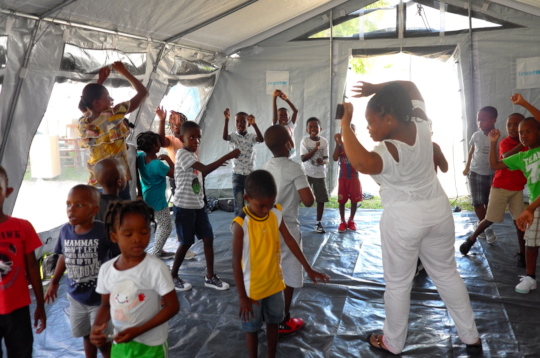 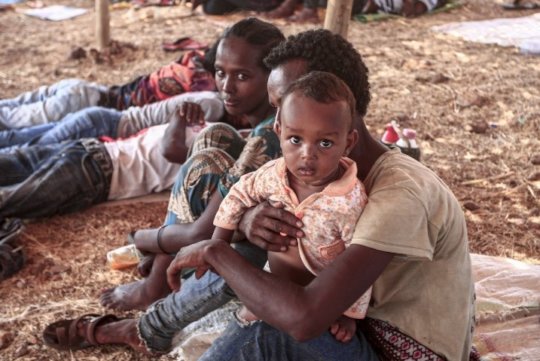 UNICEF is acutely concerned about food insecurity and subsequent malnutrition in displaced children. The typical belg rains that fuel the healthy growth of crops in the spring arrived a month later than usual; as a result, experts expect lower crop yields that will directly affect food security in the region. Lower yields will also lead to inflated prices, with market prices of staple foods already increasing by 19.2 percent in April.

Thanks to your support of UNICEF’s work on behalf of migrants and refugees around the world, UNICEF continues its life saving work to treat malnutrition for those impacted by this crisis. A total of 152,413 children in the country have been treated for severe acute malnutrition (SAM) between January – April 2021 with UNICEF direct support, and an additional 38,032 under 5 children were treated in May. Preventative measures have also been deployed. In May, counselling on infant and young child feeding was provided to pregnant women and caregivers with children under two years, reaching a cumulative 15,231 caregivers with counseling. Similarly, some 9,563 children aged 6-59 months have received Vitamin A supplementation.

Additionally, your support has ensured UNICEF continues to be able to provide education support for displaced children, returnees and other emergency-affected children in collaboration with the Ministry of Education and NGO partners. In total, 104,780 children have been reached through the provision of education services supported by UNICEF, government and NGO partners in emergency-affected regions of Ethiopia including Tigray. UNICEF is collaborating with Plan International to provide Bete services for children affected by the recent conflict in the area (Bete is an integrated child protection and education approach). Despite these important efforts, a number of education partners in IDP camps are not being reached with the support and supplies they need.

Finally, your generosity has allowed for UNICEF’s continued support of child protection and emergency services for internally displaced persons and returnees in the region. Some 4,001 children were reached with messaging on prevention and access to child protection and gender-based violence (GBV) services as it relates to COVID-19, and 10,222 women, boys and girls were provided with GBV risk mitigation, prevention and response services. Since January, 9,891 children and caregivers were provided with mental health and psychosocial support that included safe space activities, socio-emotional learning sessions and parenting education for caregivers. These sessions have enabled caregivers to understand and manage their own emotional experience and develop realistic expectations of child behavior that are appropriate to the developmental level of their child.

Thank you for standing alongside UNICEF in support of the children and communities effected by the worsening crisis throughout the Tigray region. Your generosity continues to serve as a light for those who have been forced to flee their homes and will ensure continued support for these resilient communities.

1 2 3 4 5 6 7 8 9 ... 36 ›
WARNING: Javascript is currently disabled or is not available in your browser. GlobalGiving makes extensive use of Javascript and will not function properly with Javascript disabled. Please enable Javascript and refresh this page.