PLANTING TREES: AN ACT OF FAITH 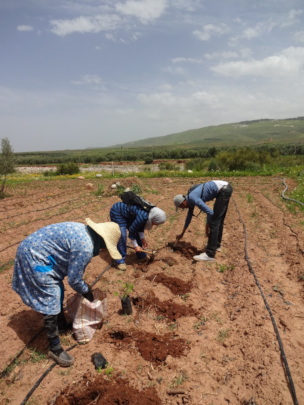 The Qur’an speaks about water as the life force: the heavens and the Earth were a joined entity, and then they were separated and every living thing was made from water [21:30]. Everything needs water to survive, and among these, of course, are trees. Trees help us to have an abundance of water as well. Between them is a symbiotic relationship.

High Atlas Foundation started its tree-planting efforts in 2000 because we listened to the people of Morocco. They wanted this because they were trying to transition from barley and corn, which are important staples but which were not meeting their household needs. They wanted to grow what would provide much more income for them: fruit trees. Ecosia, the National Initiative for Human Development, Robert Bosch College, FRÉ skincare, and many other organizations, and thousands of individuals have enabled HAF to fulfill the people’s desire, planting 1.38 million seeds in 11 nurseries in six provinces this year. More than providing much-needed increases in income, tree-planting is a vital activity for Moroccans. For HAF, we expect that 20% of what we plant might not grow. But when that happens, we are dedicated to re-planting in that very spot to ensure the bounty.

Tree-planting is a way to achieve sustainable development. In January 2020, a campaign was held to honor Martin Luther King, Jr.’s Birthday by planting as many trees as possible. This was followed by conversations about how else to offer people who might not know where or how to access a tree sapling the opportunity to get one from among the many organic varieties with which Morocco has been blessed.

HAF determined that each citizen on Earth, especially in Morocco, could have this opportunity through an e-store, which is now available on the HAF website: https://highatlasfoundation.org/store/. HAF Marketing Director, Imane Akhezzane, notes that this allows people who might not have the time or resources to visit HAF nurseries or attend planting events the chance to buy trees without leaving their homes. HAF will even deliver them to the planting sites: farming families, schools, hospitals, centers for the protection of youth, women’s cooperatives and more. Donors will also receive a certificate in recognition of their contribution, or the beautiful certificate can be given in another’s honor or memory.

HAF President, Yossef Ben-Meir, reflected that, in 1995, at his first tree-planting experience, he was sitting with the sheikh, in a village called Tissaldai, the very last village you get to in the High Atlas Mountains before the area becomes uninhabitable. The terrain is straight rock going up from the valley and the climate is bitterly cold in the winter. Looking over the agricultural terraces down into the valley, they could see the people planting the trees that had just been distributed. This sheikh, this strong, proud man, was crying, unheard of for such a man to do in front of someone else. This memory illustrates that tree-planting is deep in the heart of the Moroccan people, the Moroccan culture, the Moroccan way, maybe the human way.

King Hassan II once said, “Planting a tree is an act of faith.” When this was shared in 2003 with the U.S. Ambassador, Margaret Tutwiler, and her team in a meeting about the organization’s first funded project, she stood up and said, “Let’s spread some faith.” Directing the head of the U.S.A.I.D. to support the project, she added, “Give to HAF what you can as soon as possible so they can plant trees.” How the trees are grown - from local seed, on donated land, with organic practices - is as beautiful as the trees themselves.

The trees that were planted then yield fruit for us to eat today. We need to continue to plant trees for future generations, and it does not have to be thousands but rather what each person can give, even if it is just a single one. If we each plant one tree, we will be sure that the future generations can find something to eat on this Earth to sustain them. We must do this to be good citizens and to think about each other unselfishly.

“And it is He who sends down rain from the sky, and We produce thereby the growth of all things. We produce from it greenery from which We produce grains arranged in layers. And from the palm trees – of its emerging fruit are clusters hanging low. And [We produce] gardens of grapevines and olives and pomegranates, similar yet varied. Look at [each of] its fruit when it yields and [at] its ripening. Indeed in that are signs for a people who believe.” [6:99]

Calling tree-planting an act of faith is saying that we don’t know about tomorrow. We don’t know about our children, our children’s children, the next one hundred or two hundred years. A walnut tree can live 500 years. We plant, knowing that there can be famine and drought and that the future is never guaranteed. This act of faith is saying, “I am still going to do the best I can do today, and I’m still going to plant it and water it the best that I can even though I don’t know if the next generation will. It will be there for them, and hopefully it will be carried on.” Imagine how many generations of faith – for a walnut tree, perhaps 15 – so that every generation can eat from it? Imagine every generation that watered it and pruned it? For each, it was an act of faith. 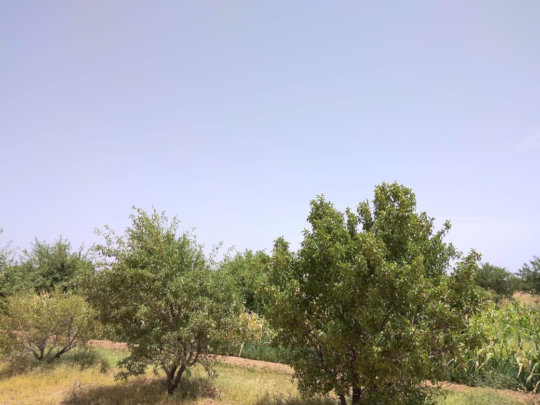 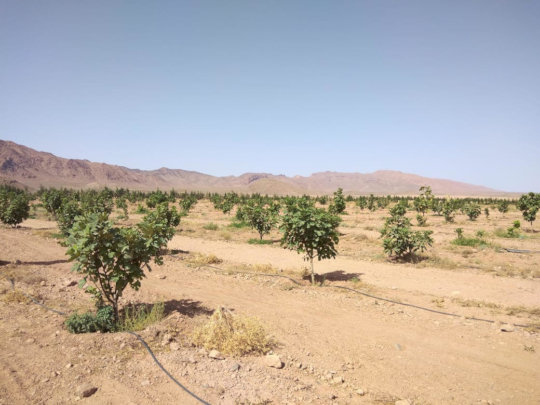 Changing the Destiny of Women during the COVID-19 Pandemic 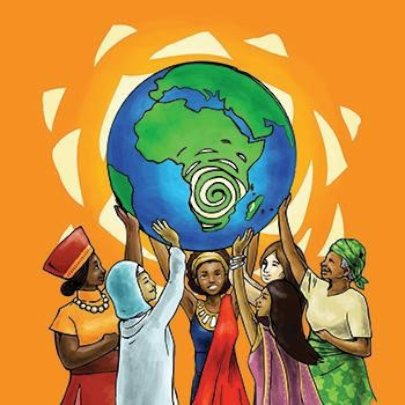 Can you imagine that due to COVID-19, several problems related to women have only increased, but these issues haven’t been given attention? For years, different NGOs worked on empowering women and gender equality, but with the unexpected appearance of an invisible enemy (the virus), those activities that used to raise awareness about injustices and discrimination against women have been stopped.

On Tuesday, July 21,  Fatima Zahra Laaribi, Administrative Support and Finance, Farmer-to-Farmer program and I participated in a virtual platform in the Multi-Stakeholder Hearing Accelerating the Realization of Gender Equality and the Empowerment of All Women and Girls as part of the preparations for the high-level meeting of the General Assembly in accordance with UN GA resolution. The virtual platform was held and facilitated by the United Nations Conference Services, and it was live-streamed on UN Web TV and social media channels. Participants entailed world leaders, NGO representatives, and intergovernmental organizations from around the world.

The main objective of the multi-stakeholder hearing was to evaluate the outcomes and recommendations of the 25-year review processes as well as the situation of women in the 64th session of the Commission. In addition, it was an opportunity to exchange experiences and lessons about women's situations among speakers from various countries through interactive dialogues for the implementation of the Beijing Declaration and Platform for Action.

I noticed that the situation of women in each country differs from their needs. One of the critical areas identified by the Beijing Declaration and Platform for Action is violence against women and education. Besides physical and sexual violence, women also experience state-perpetrated gender-based violence. Empowerment must begin from home. Both parents should equally participate in the children’s activities apart from other household responsibilities. Also, an honest and courteous exchange of ideas can plant the seed for successful equality. I believe that those three words can be the first step toward the resolution of women’s issues in general: education, empowerment, and equality.

The High Atlas Foundation’s heart is with women. It has the vision to continue to provide as much support as possible by preparing and developing new trainers for the IMAGINE Women’s Empowerment Program. Coaches will host and facilitate virtual webinars in order to train the apprentices. Once COVID-19 is under control and conditions are safe, HAF will begin direct workshops with women in their communities as always and provide them the support they need. 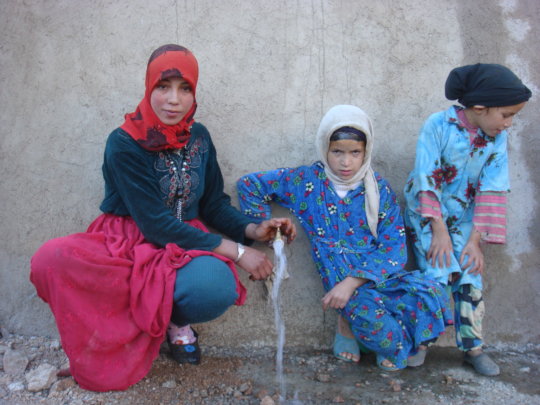 There are a number of reasons that explain the ascendency over decades, and now the mainstream, of participatory approaches to meaningful development. We often see that when people decide upon the project or change that they most want, that they will give their energy and time to help ensure its continuity and success. We widely appreciate that each local context has comparable similarities and differences from the others. Environments, relationships, and many other factors come together to make each location special and unique, and in regards to what is specifically appropriate and desired by its people.

But there is another indelible quality to participatory action for enduring change: that is, the experience and process itself helps to reveal the bound connections between the project sectors of life and how they impact our different social and economic groups.

For example, it sadly remains so that clean and accessible drinking water remains the most common priority that rural communities in Morocco determine for themselves. We certainly need to acknowledge that in recent decades there have been important improvements, but we also cannot deny that girls’ participation in education is seriously undermined by the lack of water and sanitation systems at rural schools and that the harsh burden of fetching water from kilometers away primarily falls upon girls and women. Accessible clean drinking water not only reduces infant mortality and enhances quality of life with less disease, but also directly and measurably (up to 16% according to the World Bank) enables girls to study with basic comfort and without shame. Thus, water access and girls’ education are positively linked.

Here is another example: Let us consider the enormity of the national demand for fruit trees, and in requiring an effective investment. What is the plan on the national level to generate trees as farming families transition from traditional barley and corn to organic fruit that can be cultivated and sold in lucrative markets, particularly as raw products are processed? It takes two years for a seed to grow into a sapling, and farmers must sow and grow crops each year in order to make most basic ends meet. The provision of land for farmers to build their nurseries as a contribution where rural communities cannot meet their needs, is one essential criteria for overcoming poverty conditions.

Partnership with government agencies that can provide land in-kind for farming communities is therefore vital for the nation to achieve its goal of billions of trees. The Department of Waters and Forests, the Ministry of Education, the Ministry of Youth and Sports, provincial authorities, public universities, and thoughtful civil society groups are all in a position to grant the use of land for communities to build their nurseries. At regional levels, all these agencies have done so, which underscores the point that the interplay at all sectors, faiths, administrative tiers, and components of society, together have an inescapable and undeniable role within the sustainable development process, without which, the most critical needs of the people cannot be met, even when they are empowered, determined, organized, and committed to achieving change. Unity of all strata and sectors, when combined with the community’s own unity and consensus around their plans for actions and projects, are essential to the building of better days that we need.

Part of natural resource management is about gender and youth empowerment, just as agricultural growth is tied to social solidarity, and actions that are in unison. Financial independence of women’s cooperatives is as much bound to markets as it is to water and self-discovery, justice, and participation. The High Atlas Foundation embraces the participatory approach and participatory activities for development, because it reveals these interconnections and the multifaceted plans required to bring along all sectors, individuals, groups, and layers toward a shared fulfillment. 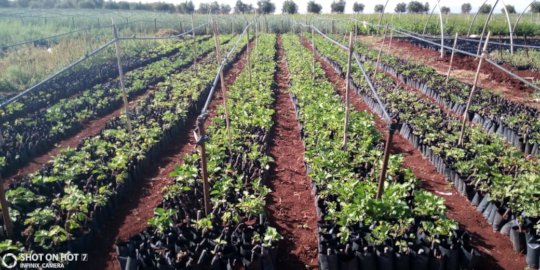 ‹ 1 2 3 4 5 6 7 8 9 ... 180 ›
WARNING: Javascript is currently disabled or is not available in your browser. GlobalGiving makes extensive use of Javascript and will not function properly with Javascript disabled. Please enable Javascript and refresh this page.